How robot soccer got me into points and miles 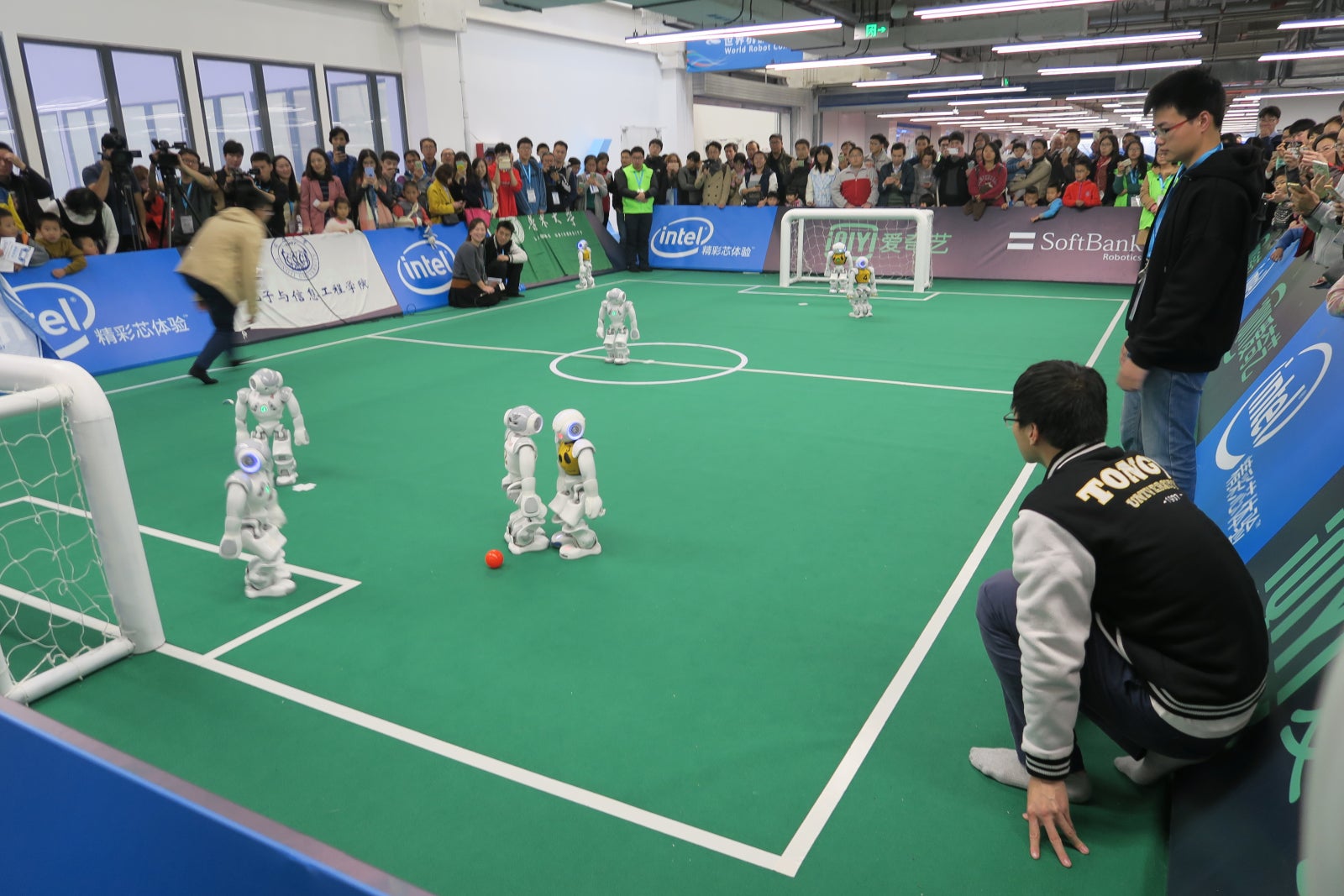 Before I was a points and miles writer, I programmed robots to play soccer. While getting a Ph.D. degree at the University of Texas at Austin, my thesis project created algorithms for robot birds that could help end bird strikes on airplanes. But my secondary project was robot soccer.

Each year, my lab's robot soccer team would travel to compete in the international RoboCup competition. Traveling to a new destination each year for this competition let me discover my love of travel and sparked my interest in points and miles. Here's my points and miles origin story.

Finding a love of travel through robot soccer

In 2011, I traveled to Istanbul for my first international RoboCup competition. My husband joined me, and we traveled around Turkey for a few weeks afterward. This trip, especially the sights we saw and the people we met, sparked my love of travel. But it wasn't the start of my points and miles journey.

The next year I went to Mexico City, where my team won our league's competition. After the competition, I enjoyed staying in the historic Centro area and visiting Teotihuacan. Then we went to the Netherlands in 2013 and Brazil in 2014, which were memorable trips to new-to-us destinations.

I earned a lot of online travel agency rewards by booking hotels for my entire team on these trips. But I still didn't know much about hotel points and airline miles. I was happy to stay at hostels and inexpensive hotels, so I didn't think there'd be value for me in hotel points or elite status. And I didn't think I flew enough to benefit from airline miles or status.

Related: Is hotel elite status worth it anymore?

The open-jaw redemption to Asia

At the end of the 2014 competition in Joao Pessoa, Brazil, the organizers announced that the next year's competition would be in Hefei, China. My husband and I had never heard of Hefei before, but there was no question whether we'd go. After all, I held a leadership position in my team's league. And we enjoyed taking an international trip each year to participate in RoboCup and then sightsee.

2015 was before cheap fares were common from the U.S. to China. My university would reimburse my flights, but my husband faced round-trip fares of more than $1,500. And with limited vacation time, he wanted to maximize his time by flying into Hefei and then out of Beijing or Shanghai.

He'd started reading about points and miles on various websites. So, faced with high prices for open-jaw flights, he decided to sign up for a new credit card and earn a bonus that he could use for flights to and from China.

He decided to open a Chase Ink Business card that offered an elevated sign-up bonus. After meeting the minimum spending requirements, he transferred the bonus's Ultimate Rewards points to United. Then, he used United miles to book two one-way awards that included economy on Air China's 747-8 and economy on Lufthansa's A380.

Understanding the value of points and miles

Although I didn't play a role in his award redemption, this redemption made me realize there's real value in credit cards and their rewards. I'd signed up for a few cards in early 2015, including two Southwest credit cards, a United credit card and the Capital One Venture Rewards Credit Card. But it wasn't until his award redemption that the value of points, miles and award travel became real to me.

Near the end of our trip to China in 2015, I redeemed online travel agency rewards to book a train from Shanghai to Guilin, China. And my husband transferred some of his points to British Airways to book me a short business-class flight from Guilin to Hong Kong. This business-class flight — one of my first premium-cabin flights — further sold me on the value of points and miles.

So, once I returned from China, I started learning about points, miles and credit cards. I read articles on various websites and attended Chicago Seminars, but most of my initial learning was via the now-defunct Abroaders podcast.

I quickly became hooked, listening to podcasts and learning about points and miles daily. My inspiration was to learn how to maximize the points, miles and credit card rewards we were earning to fund a gap-year trip once I finished my Ph.D.

Turning a passion into a lifestyle and job

In 2015, my husband and I both started writing for The Points Guy. We began writing economy flight reviews but eventually added hotel reviews, news and guides to our bylines.

By the time I graduated in 2017, we no longer planned to take a gap year. Instead, we found we could continue writing about points, miles and credit cards while traveling full time as digital nomads.

And that's the life we've lived for almost five years now. Of course, digital nomad life looked a bit different during the height of the coronavirus pandemic when we bought an RV and traveled full time by RV for almost a year. But after splitting time between our RV and international travel, we're getting back to full-time international travel this summer.

Although points and miles fuel some of our travel, we also book many paid flights and stays. After all, we aim to get at least TPG's valuations when redeeming points and miles.

Related: How (and why) to calculate award redemption values

And some perks, such as American Airlines systemwide upgrades, require you to book paid fares. Plus, to requalify for American Airlines Executive Platinum elite status, we need to fly some high-earning paid premium-cabin fares with partners.

I'll attend my ninth RoboCup competition in Bangkok this July. We redeemed 70,000 American Airlines miles each for a one-way business-class award from the U.S. to Bangkok. And I'd initially redeemed 55,000 IHG points for an 11-night stay using IHG's fourth-night reward. But, when IHG announced a new status match and challenge, I decided to cancel my award stay and instead book a paid rate to get 11 of the 15 nights I'll need in 120 days to snag Diamond Elite status through the end of 2023.

Check out the RoboCup Standard Platform League's website and YouTube page if you want to follow this summer's RoboCup competition. And if you're just getting started with points and miles, keep reading articles and exploring redemptions. You'll likely find that your knowledge grows quickly.

Related stories
17 ways to earn lots of Marriott Bonvoy points
Delta SkyMiles Gold Amex card review: Perfect for casual Delta travelers, now with a 65,000-mile offer
Quick Points: These award tickets are best to book at the last minute
21 pro budget travel tips expert travelers use all the time
Featured image by JT Genter
Editorial disclaimer: Opinions expressed here are the author’s alone, not those of any bank, credit card issuer, airline or hotel chain, and have not been reviewed, approved or otherwise endorsed by any of these entities.