This New $11,000-a-Night Cruise Ship Suite Will Be Bigger Than a House 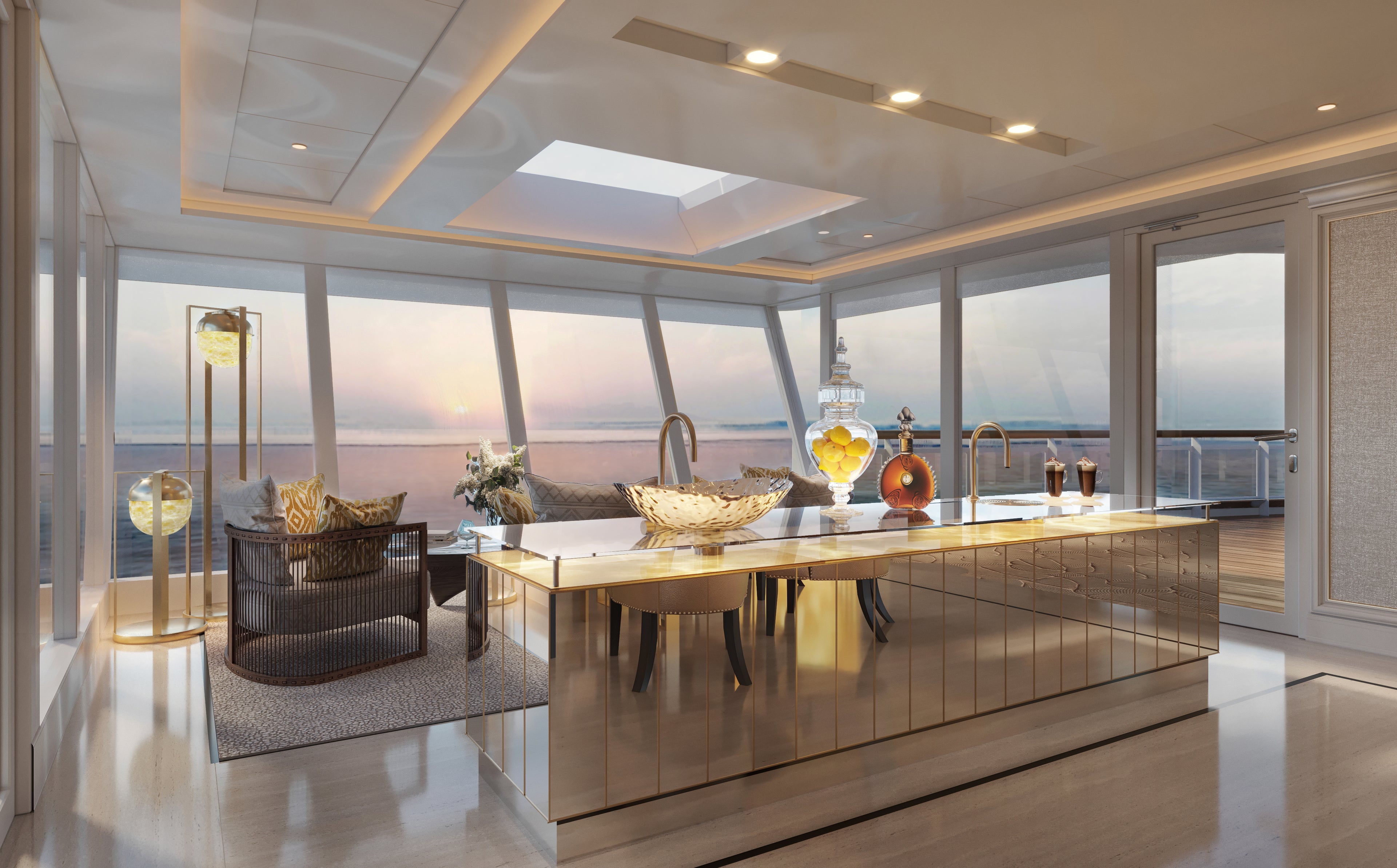 This New $11,000-a-Night Cruise Ship Suite Will Be Bigger Than a House
This post contains references to products from one or more of our advertisers. We may receive compensation when you click on links to those products. Terms apply to the offers listed on this page. For an explanation of our Advertising Policy, visit this page.

Call it the swankiest cabin ever.

Luxury cruise line Regent Seven Seas Cruises has plans for a palatial owner's suite for its next ship that will feature such over-the-top amenities as a hand-made mattress costing $200,000.

It’ll be “an unrivaled experience,” Regent president and CEO Jason Montague said of the two-bedroom, two-and-a-half bath complex that will sit atop the bridge of the soon-to-debut, 750-passenger Seven Seas Splendor.

Billed as the largest suite ever on a luxury ship, the sprawling Regent Suite will measure 4,443 square feet. That's nearly twice the size of the average American home, and more than three times the size of Royal Caribbean's Ultimate Family Suite.

Lined with exotic woods and marble, it'll offer unobstructed, 270-degree views over the ship's bow and come with its own private spa with a sauna, steam room and unlimited massages from a Canyon Ranch SpaClub therapist. Separate living and dining areas will be replete with pricey, handmade furnishings and art.

The centerpiece will be the master bedroom area, which will occupy a whole wing. Its king-size bed is currently being crafted by four artisans at the renowned Hästens workshop in Köping, Sweden. With a pinewood frame, steel springs and layers of flax, horsetail hair, and cotton and wool batting, Regent says it will be the most comfortable bed ever on a ship. (If it cost Regent $200,000, it better be the most comfortable mattress, well, ever.)

In the adjacent master bath, guests will find a walk-in shower with a floor-to-ceiling glass wall overlooking the ocean, and two heated relaxation loungers with equally spectacular ocean views.

Still, the best views of the ocean from the Regent Suite — even better than what the ship’s captain gets from the bridge — will be found at its forward-facing, glass-enclosed solarium, which comes with a fully stocked bar. Or, step outside onto the adjacent wraparound balcony, where you can watch the sunset from a custom-made Treesse minipool spa. Just don’t forget to grab an always-on-hand complimentary bottle of Veuve Clicquot first. Obviously.

The suite, of course, comes with an eye-popping price tag: $11,000 per night for two. But for that price, you’ll also get first class domestic flights to reach the ship, along with a personal car, driver and guide in every port. Other perks include a precruise concierge and a dedicated butler while on board. Not just any butler, but the head butler for the entire vessel.

Regent has long been known for creating some of the most spectacular suites at sea, including a similarly giant complex on its two-year-old Seven Seas Explorer. But Regent promises that the super-sized compound on Splendor will top them all.

Your first shot at booking this downright ostentatious suite is at least a year away. Scheduled to debut in Europe in February 2020, Seven Seas Splendor will initially head to the Americas for several winter cruises out of Miami, San Diego and New York City, before returning to Europe for the spring, summer and fall. European itineraries will include voyages to the French Riviera, Greek Islands, Iberian Peninsula and United Kingdom.