Articles
Summer Hull , aka Mommy Points, ran the Mommy Points site for families who want to travel more for less using miles and points for seven years. She now heads up a variety of special projects at TPG when she isn't exploring the world with her own two girls.
Follow
Jan. 22, 2020
•
11 min read 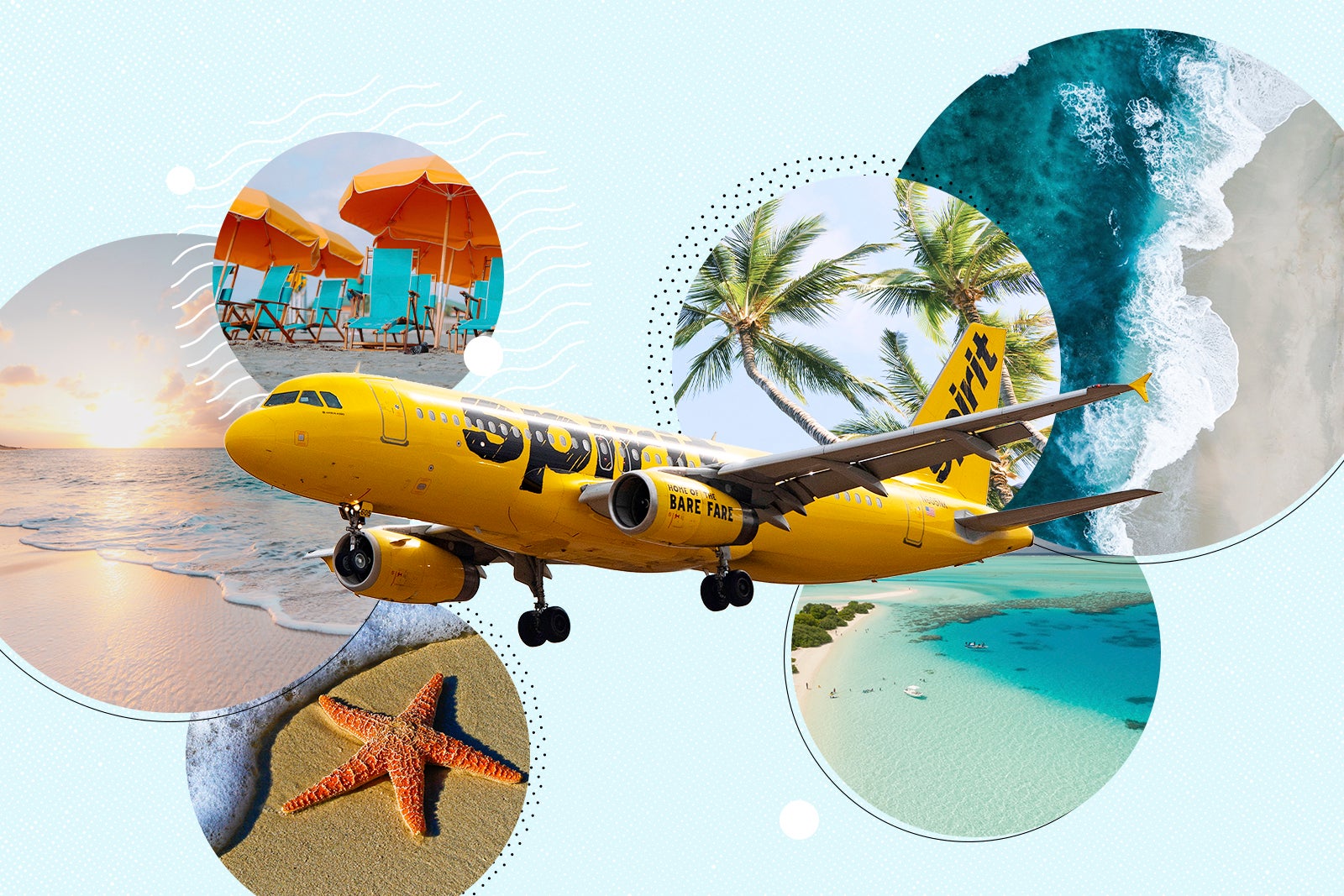 I'm not a real millionaire, but I'm a solid points millionaire. Points-and-miles millionaires are pretty common among award travelers (shout out to those welcome bonuses of 100,000+ points). However, even with all the points-rich types running around here, TPG recently received an email that caught my eye.

A New Jersey-based retiree with 442,552 miles wrote in asking for help now that he has some free time on his hands. While that number alone wasn't anything out of the ordinary around these parts, what made my jaw drop was the airline he earned them with: Spirit Airlines.

Now, I totally get why someone would fly on Spirit Airlines. Those rock-bottom fares are a budget traveler's best friend, and you'll frequently find me in the Big Seat with my free personal-sized carry-on bag at least a couple of times a year.

Having close to half a million Spirit miles is a feat, since they expire faster than any other miles on the planet -- by far. In fact, even as Delta, United and Southwest have all made their miles non-expiring, Spirit miles still expire after three months of no activity. Let that sink in for a second: three months. I can go three months without walking into a grocery store if I try hard enough. That's a blink of an eye.

To amass close to 500,000 non-expired Spirit miles is impressive -- and it also makes me very nervous he'll lose them all if he isn't careful.

Related: How to keep Spirit Airlines miles from expiring

Before we brainstorm ways to cash in that many miles, I'll get to the burning question of how -- and why -- he has that many Spirit miles at all.

How and why would someone collect that many Spirit miles?

This traveler (who wishes to remain anonymous), lives close to the Atlantic City Airport (ACY) and frequently traveled for work to Fort Lauderdale (FLL). Spirit Airlines operates multiple daily nonstop flights between those airports, making the airline a convenient choice. Prices on that route are often under $100 round-trip, making them an affordable choice, as well. Booking last-minute, as he often did, would drive the price up some, but it's still going to be a pretty reasonable way to get down to Florida and back.

How was it flying that many miles on Spirit?

We have all heard friends' horror stories about the days it took to get home after a cancelled Spirit flight. So someone who has flown Spirit that frequently was bound to have a disaster story or two, right? Apparently not.

He said that he only ever experienced one flight with a delay longer than an hour. Spirit has really improved its on-time rates in recent years, but this guy should probably buy a lottery ticket. That's an impressive run no matter how you look at it.

"I've spent more time on a bus to get from NYC to Atlantic City than it takes to go from FLL to ACY," he says. Comparing Spirit to a bus ride seems appropriate -- especially since he usually couldn't snag the Big Front Seat for his last-minute bookings.

For more TPG news and travel tips delivered each morning to your inbox, sign up for our free daily newsletter.

Where to vacation on Spirit miles

Now that we know how and why someone might have over 442,000 Spirit miles, the fun part is how to redeem them. I asked where he wanted to go with his miles and his answer was: "I have no idea about vacations. I live close to beaches and lived and worked in NYC for 40 years. I originally came from Scotland, so really no idea."

OK, I'll take it from here. (But, fair warning, beach ideas incoming below.)

We value Spirit miles at a little under 1/2 a penny each -- .4 cents to be exact. That means that 442k Spirit miles are worth around $1,768 on the average. In contrast, we value 442k Southwest Airlines points at $6,630. Spirit miles certainly have value, especially when you have that many of them, but they're worth significantly less than some other award currencies.

Here are some different ways to redeem 442,552 Spirit Airlines miles:

Spirit Airlines award flights (for Spirit credit cardholders) actually start at 2,500 miles each way for off-peak travel within a zone of 1,249 miles or less. With that many miles, he could book 177 of these flights, which is truly an excellent deal.

Related: Why getting the Spirit Airlines credit card isn't crazy

From Atlantic City, possible nonstop destinations within that mileage zone include: Atlanta, Myrtle Beach, Fort Myers, Orlando, etc. (Here's what to eat, drink and do in Atlanta if you make the trip.)

Did you know Spirit miles could take you to another continent? If he wants to go as far away as his Spirit miles can take him, Lima, Peru (LIM) is the destination of choice. In fact, he could connect in his familiar turf of Fort Lauderdale on his way to Lima since Fort Lauderdale is a key Spirit hub.

Sadly, this will burn miles pretty quickly at about 45,000 miles per ticket each direction, but here's why Peru should be on his vacation short-list. (And it's not just Machu Picchu.)

Enjoy the best of the Caribbean

I know our traveler is well-versed in beach life, but the Caribbean is different enough from both Atlantic City and Fort Lauderdale that I'm going ahead with this idea. Spirit operates flights to some five-star Caribbean destinations such as Aruba, Jamaica, St. Thomas, St. Martin and St. Croix.

For those itineraries, it's again going to likely require a connection in Fort Lauderdale and about 27,500 miles plus taxes each way. Of course, he has plenty of miles to burn, even on a big family Caribbean vacation. Those beaches are pure paradise.

While we're on the subject, we put together a guide about where to stay in the Caribbean using hotel points. Fingers crossed he has some of those points, too.

West Coast is the best coast

It sounds like this reader knows the East Coast well, so maybe it's time for a trip west. Spirit has flights to Los Angeles (LAX), though again, he'd probably have to connect in Florida or a similar airport. Award prices aren't great -- about 37,500 miles each way in my searches -- but it's a solid destination option. If the City of Angels is on your radar, be sure to check out our guides on what to eat and where to stay.

Then, take the Pacific Surfliner train down to San Diego -- with an optional stop in Anaheim along the way. California, here you come.

Spirit Airlines has a pretty big presence in Las Vegas. Unfortunately, there aren't nonstop flights from Atlantic City that I'm seeing, but you can get there for about the same number of miles as going to California. Truthfully, it's not a great redemption value, but it is a fun destination. Here are our tips for enjoying Las Vegas, and for taking some day trips away from the Strip.

Unless you just have miles to burn, taking some of those connecting Spirit award itineraries isn't really a great value per mile. However, spending just 2,500 Spirit miles to fly somewhere off-peak (with the Spirit Airlines credit card) is a great deal, especially if you book well in advance to avoid extra close-in fees.

He could take the whole family to Orlando for just 2,500 per person each way on the right dates. In that case, Disney World, Universal Studios and all the other Central Florida attractions would be at his fingertips all with very little cost paid out of pocket for the flights. That's a definite win in our book.

There really aren't many ways to use Spirit miles other than flying Spirit, but there is one alternative. You can spend your Spirit miles on magazine subscriptions. Subscriptions to Allure, Midwest Living, Sports Illustrated, Travel + Leisure, Parents and Better Homes and Gardens start at just 400 miles per subscription.

Theoretically, he could subscribe to hundreds and hundreds of titles ... although we wouldn't recommend that. I mean, he can pick up a few if he needs more reading material in retirement, but I'm guessing even the most voracious reader wouldn't burn more than a few thousand miles a year in this manner.

If it were me and I had hundreds of thousands of Spirit miles to burn, I would spend them on one big trip to another country I'd never visited — even if it cost me a significant chunk of them. I'd also be sure to book well in advance to reduce fees, and would definitely splurge on the Big Front Seat.

Then, I'd take as many family members as wanted to go to one of the destinations within the 2,500-mile zone from Atlantic City for a long weekend.

After that, I'd start earning a different kind of points and miles to expand my award-travel opportunities. The American Express® Green Card (3x on travel, transit and dining) or Chase Sapphire Preferred® Card (2x on travel and 3x on dining) come to mind as great tools to open up more of the world with Chase Ultimate Rewards and Amex Membership Rewards points.

He could keep earning Spirit miles, but just enough to take some of those 2,500-mile award trips down to Florida or slightly beyond.

How would you use a half-million Spirit miles?