Articles
Alberto Riva Alberto runs our flight reviews and oversees special projects across several verticals. Previously, he was the managing editor of Vice News and worked at Bloomberg and CNN, where he was constantly trying to convince people to do more stories about airplanes. He speaks Italian, French and Spanish and one day he’ll be better at German.
Follow
Oct. 19, 2018
•
7 min read 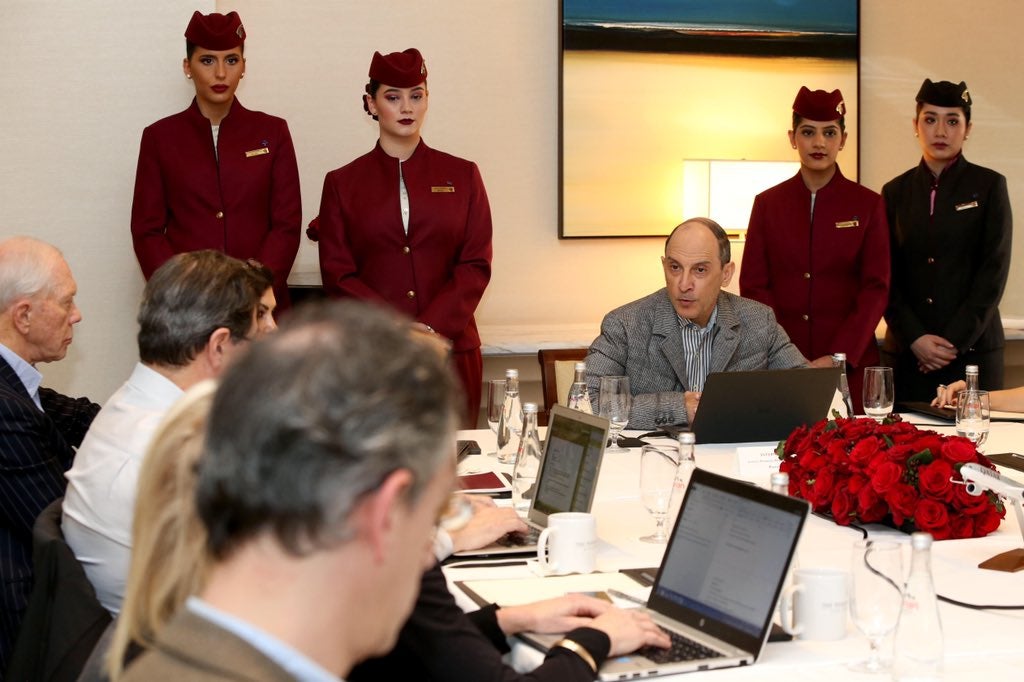 Akbar al Baker is known as the most outspoken leader in the airline industry. From controversial statements about women in top aviation jobs (for which he has apologized) to geopolitical meditations on the risk of war, a chat with the chief executive of Qatar Airways is unlikely to ever be boring. Thursday in New York, al Baker did not disappoint the dozen journalists who had gathered at the Peninsula Hotel for a lunch meeting, announcing that he is on the brink of leaving the Oneworld alliance because American Airlines, in Qatar's view, is not playing fair.

The second-largest of the Big Three Gulf airlines, behind Emirates and ahead of Etihad, will also be privatized by the next decade, al Baker said. "I would buy shares in Qatar Airways," he quipped to the assembled press -- which of course no one can do, since the airline's 100% owned by the government.

The 56-year old chief executive had quite a few other things to say.

Qatar Still Wants a Piece of a US Airline

Last year, a plan to invest in American was scrapped ingloriously, but Qatar isn't done looking at the US market for stakes to buy in airlines. "At the moment we are happy with what we have," al Baker said in response to a question on whether he wants to invest in a US airline. "You know that there is a lot of resistance to Qatar Airways investing in the three major US carriers." Yet, "when an opportunity will come and we have the blessing of the US government, yes, we would like to invest. This is the largest aviation market, and any stable CEO of an airline would want to invest in the United States."A slight pause before choosing that unusual adjective, "stable," seemed to suggest that al Baker was weighing his words carefully -- and possibly making a reference to US President Donald Trump's definition of himself as a "stable genius." (The two are friends; more on that below.)

The Seats Are too Small

Qatar is "developing a new seat for economy class, to be introduced in March," al Baker announced. He's also "thinking of making Wi-Fi free," which would be a pretty major selling point for business passengers together with the new Qsuites biz class, which TPG rates the best in the skies right now.

US airlines, though, are cramming more seats into airplanes. Even JetBlue, the undisputed champion of coach legroom, is packing them in tighter. So is cabin densification getting out of hand? "Yes," al Baker replied. "We will never go lower than 32" inches of legroom, he promised.

Americans are also paying too much to sit in those tiny coach seats, according to the Qatar CEO, who recounted how one of his managers recently had to buy a last-minute ticket from Washington DC to Savannah, Georgia, paying $1,000. On Qatar Airways, according to al Baker, last-minute airfare for a flight of that duration would be half that, "and you get a three-course meal."

But that's as far as al Baker would go. Perhaps remembering the brouhaha he kicked up last year when he said US airlines were "crap" and their flight attendants "grandmothers" -- he has since apologized -- he wouldn't disparage American carriers, saying their service is "good." He even had a kind word for LaGuardia airport, the bane of New York-based passengers. He flew through there once, he said, and liked it.

Airbus and Boeing salespeople love the Gulf Three carriers, who are consistently good customers. Qatar is a launch customer, for example, for the future Boeing 777X models, a bigger version of the current 777 lineup. But al Baker just doesn't like the Boeing plane that everybody's talking about, the yet-to-be-announced "middle of the market" twinjet that's supposed to fill a gap between the 737 and 787. It doesn't have an official name yet, but it's pretty obvious it will be called 797.

"We are not interested," he deadpanned in response to a question on whether Boeing pitched him the plane. "It's too close to the 787-8." Qatar already has a 250-seater, in other words, and doesn't need a new one, especially when it's already bought something similar from rival Airbus: "We have a large order for the A321LR, which is very similar in range." (Qatar's A321LR will have lie-flat business-class seats in 1-1 configuration, al Baker said.)

He is no fan of the A380, either. The biggest passenger plane in the world is making lots of money for Gulf rival Emirates, but no one is buying any more -- and Qatar will get rid of its 10 A380s in the next decade. "We will keep the A380s until they're 10 years old, then send them to the desert," al Baker said. The oldest in the fleet have been delivered in 2014; the youngest just months ago. So, we should be able to fly Qatar A380s until 2028.

Trump Is Still His Friend

The president of the United States and the boss of an airline that bought tens of billions' worth of US-made airplanes are buddies -- al Baker once famously said "I call Donald my friend."

Asked if that's still the case these days, with President Trump in the corner of Qatar's regional rival Saudi Arabia, al Baker said yes. "I would still call him my friend," he replied, without hesitation, over a filet mignon. But, he specified, that's "on a personal level. (...) My friendship is with the person, not the president."

The two go back to 2007. "I met him when we began flying to JFK instead of Newark," al Baker reminisced. The airline produced a gala event to mark the occasion: "We invited him. Diana Ross performed. He and Melania came and sat with me and my wife, and we became friendly."

After that, "He visited my country twice. And Ivanka and Jared have flown Qatar."

The 2015 call from then-candidate Trump to ban Muslim travelers from the US did test that friendship, with al Baker saying that Trump would not be welcome in the Muslim world, but the two have kept talking: "He sent me a note when I spoke after he spoke against Muslims. He said he appreciated it."