Articles
Mike Arnot is the founder of Boarding Pass NYC, a New York-based travel brand and a marketing consultant to airlines. A private pilot, he can sometimes be found above the skies of New York City.
Follow
Oct. 04, 2019
•
8 min read 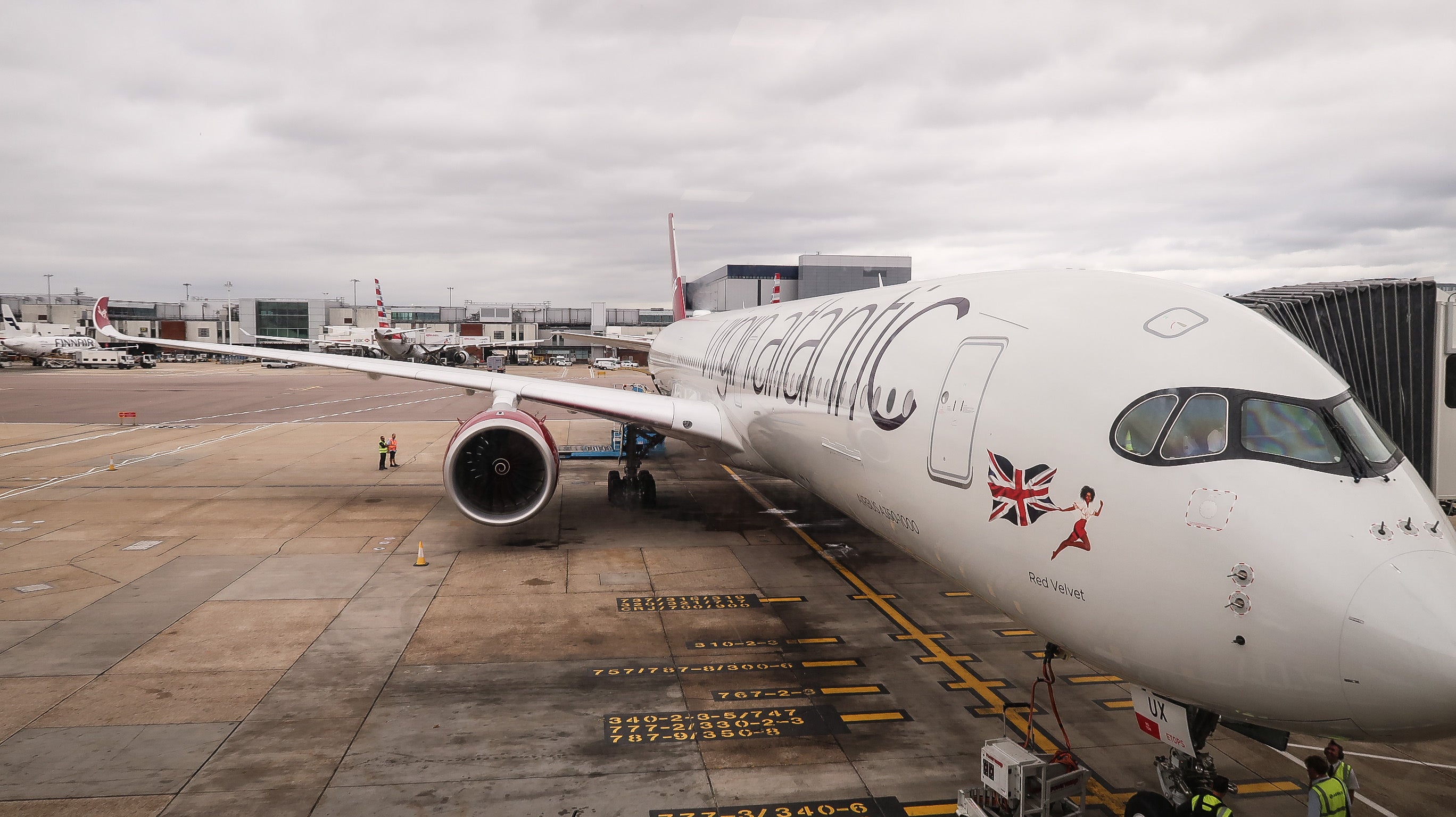 Behind the scenes with a Virgin Atlantic captain on a pre-flight airplane walkaround
This post contains references to products from one or more of our advertisers. We may receive compensation when you click on links to those products. Terms apply to the offers listed on this page. For an explanation of our Advertising Policy, visit this page.

Every airline tries to be a well-oiled machine. Planes arrive at the gate, passengers and cargo are unloaded, the aircraft are cleaned, fueled and turned around. A lot of that happens in view of the passengers; sometimes you'll see cleaners come in even as you disembark, for example.

But one key part of the process that happens outside of the view of passengers — unless you're watching from the terminal through the window — is the walkaround. This is a 10-minute or so pre-flight exterior check performed by a first officer or captain. You'll spot them wearing their uniform covered by a high-visibility vest. And it's done before every single flight, in good weather and bad.

Before a recent flight with Virgin Atlantic aboard the airline's sparkling new A350-1000, I accompanied Captain Oggs Wayman on a walkaround. (For safety and operational purposes, he performed his own walkaround in advance, without me tagging along asking questions.)

Wayman is a longtime Virgin Atlantic captain, who started his career in the British Army as a helicopter pilot. With more than 12,000 hours of flying under his belt, he has done his fair share of walkarounds.

"On a walkaround, we're looking for specific items as we progress around the aircraft, but we're also looking at the big picture. Does everything look as it should?" he said, over the din of the auxiliary power unit of his A350 and nearby aircraft, as he led me on the preflight inspection.

"We know that a Virgin Atlantic engineer has also done a check of this aircraft in advance—it's a team effort with a view to safety," he added.

We started underneath the port side wing, where Wayman pointed up at letters on a panel. "If I can read those letters—521 DB— I know there's no icing issue on the underside of the wing," he said, explaining that this "letter" check is written in the aircraft manual. Aircraft sometimes arrive with some thin ice on the wings or develop frost from the cold fuel in the tanks.

After looking at the leading and trailing edges of the wings, we moved to visually inspect the fan of the engine. Wyman pointed out the close tolerances of the fan blades in this Rolls Royce engine; there are only millimeters of space between the fan blades and the inside of the engine cover. There, he said he looks for anything that can be spotted with the naked eye that might call for further inspection from Virgin Atlantic engineering, such as nicks or dings. On the outside of the engine nacelle, Wayman pointed to a closed hatch. He explained that he wants to see that it's both present, closed and there's no fluid.

The walkaround then progressed to the underside of the belly, where Wayman was looking for any bumps or damage or "anything out of the ordinary".

The captain inspected the radome, nose gear and the nose wheel, noting that he was looking for anything that is out of the ordinary including fluids that shouldn't be there or any part that is misaligned.

He then proceeded to look into the wheel well.

"This is a brand new aircraft and she is very, very clean," he said. Indeed, the landing gear was spotless.

Wayman then performed the same checks on the starboard side of the aircraft. We paused for a moment to look at a valve on the body of the starboard side, noting that he's looking for green inside that small window to make sure the crew supplemental oxygen tank system is charged.

Onward, we stopped at the hefty landing gear. He pointed out a small wire. "The amount of wire there tells me how much the brakes have been used," he said, noting this plane has but a few dozen hours on it.

From there, Wayman looked inside the rear of the turbofan engine. (In winter, he might look for any signs of ice pooled inside.)

We took a step back from the engine. Wayman pointed out the small winglet called a nacelle strake extending from the side of the engine cover. He said he once heard of a first officer at a different airline doing a walkaround, who noticed that the strakes were on the outside of the engine nacelle, not the inside.

"As it turns out, during a maintenance check, the engine nacelles were installed on the wrong engines. The left was installed on the right engine, and vice versa. The first officer was the only one who noticed, during his walkaround!" (As an aside, the purpose of the strake is to help direct airflow over the wing at high angles of attack, such as during takeoff.)

Following the visual inspection of the engines, we turned to face the leading edge of the wing, where this new airplane had received a small ding in test flights, from a bird strike. No matter, the leading edge had been patched up nicely. There were no signs of ice (although icing can occur as late as June and as early as late August in the U.S., there was none to be seen.)

Wayman and I took a moment to take a look at the sheer beauty that is the wing tip of the A350 and paint job on this Virgin Atlantic version.

Continuing the walk around, we proceeded to the underbelly of the tail similarly looking for any leaks or oddities. (The belly of the aircraft has a service hatch for the lavatory system. I avoided that.) No oddities found, we continued to the tail of the aircraft and the APU. From here, it's hard to get up close and personal. And it was loud. Wayman pointed out the navigation light on the tail, which was lit.

With the walkaround complete, Wayman headed up top to complete the pre-flight checklist, along with the two other captains staffing the flight deck. (This was an unusual flight, in that it was staffed by captains only, without first officers.)

About 45 minutes later, we pushed back from the gate, departed Heathrow and landed in New York, safe and sound.

Mike Arnot is the founder of Boarding Pass NYC, a New York based travel brand, and a marketing consultant to airlines, none of which appear in this story.

Our points-obsessed staff uses a plethora of credit cards on a daily basis. If anyone on our team wouldn’t recommend it to a friend or a family member, we wouldn’t recommend it on The Points Guy either. Our opinions are our own, and have not been reviewed, approved, or endorsed by our advertising partners.
See all best card offers
Related stories
Reviews
A new hotel that needs to work out the kinks: A review of the Hyatt Regency Salt Lake City
News
Lyft quietly adds wait time fees to most rides
Guide
What is Marriott Bonvoy elite status worth in 2023?
Guide
15 ways that cruising newbies waste money on their first cruise