Heavy Load: How the Landing Gear Works on Airplanes

Articles
Mike Arnot is the founder of Boarding Pass NYC, a New York-based travel brand and a marketing consultant to airlines. A private pilot, he can sometimes be found above the skies of New York City.
Follow
June 09, 2019
•
8 min read 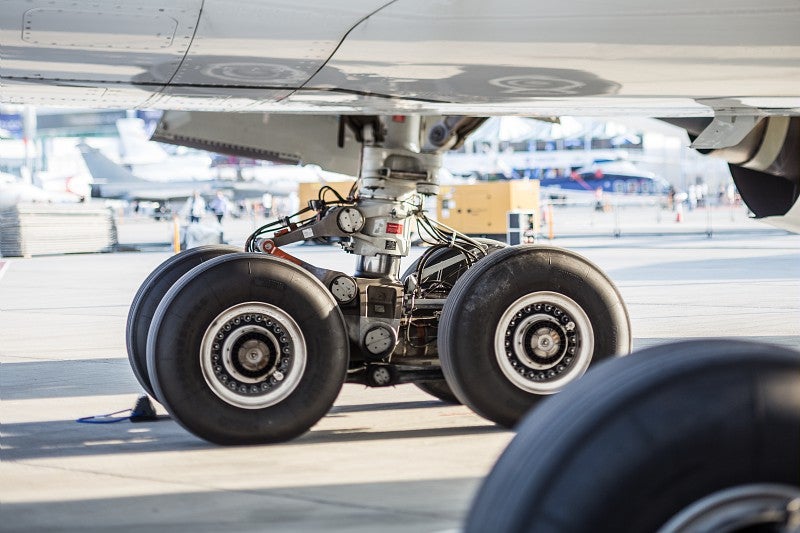 "Unlike the engines and wings, the landing gear is not essential for flight, just for smooth landings!" So says Chris Brady, a longtime Boeing 737 and Airbus A320 pilot in Europe. Landing gear are mechanical marvels, and estimated by Airbus to represent 20% of total aircraft maintenance costs and around 7% of the weight of the aircraft. They are a big deal.

To learn more, I checked in with Brady (who also runs the Boeing 737 Technical Site) and Dr. Snorri Gudmundsson, Associate Professor of Aeronautical Engineering at Embry Riddle Aeronautical University, and an expert on aircraft design.

Landing gear are made by specialty suppliers to the aviation industry, not by manufacturers like Boeing and Airbus themselves. The largest is Safran Landing Systems, with worldwide manufacturing operations. Making the components is a tale of precise engineering; the main strut (discussed below) is machined out of a solid column of high strength steel — literally a hole bored through a tube of solid steel. This strut is the heart of the landing gear; the mechanism can support around 500 metric tons (about 1 million pounds) plus the forces of an aircraft landing.

"The main purposes of the landing gear apart from saving the fuselage from dragging on the ground on landing, is as a shock absorber, and the wheels allow the aircraft to have brakes to slow down after landing," Brady said. He noted that the X-15 experimental aircraft had skids because the landing speed was so fast it would have burnt through tires very quickly.

"Landing gear and shock absorption is a field of science on its own," said Gudmundsson, explaining that landing gear on commercial aircraft universally use oleo-pneumatic shock absorbers in the form of struts. This is a telescoping tube-within-a-tube.

Gudmundsson explained that the shock energy is absorbed in the landing by forcing oil in a chamber (in the strut) through small orifices, against a chamber of dry air or nitrogen. The oil and gas are maintained under very high pressure. "The strut designers are taking advantage of the properties of gases and liquids in the design of these devices," he said, noting that liquids are incompressible — they don't reduce their volume much under pressure.

"The struts have to be capable of two functions," he said. "To absorb the landing impact load and to permit rebound. The rebound is necessary to make sure that once the airplane's landing impact has been absorbed, it will rebound to some height above the ground, rather than 'sitting' on deflated shock absorbers, which would eventually damage or destroy them as the aircraft taxis over uneven surfaces."

"This load, which depends on the weight of the aircraft and landing speed, takes into account vertical, horizontal, and side loads. It is possible to break everything; the landing gear is certainly no exception. However, it is highly unlikely the landing gear would fail structurally in normal operation. It is far likelier its retraction mechanism would fail to retract or deploy," Gudmundsson said.

"If the theoretically best shock absorber is 100% efficient, an oleo-pneumatic comes in at about 85-90% efficiency. A leaf-spring style landing gear, found on many small aircraft, is only about 50% efficient."

If you've ever watched a YouTube video of a takeoff, you'll note that the pilot flying will call out "positive rate, gear up", at which point the gear handle will be pulled up.

"This is a universally adopted standard operating procedure (SOP), which like most SOPs has been derived from hard-earned lessons, mostly gained from accident investigations," Brady said.

"The gear is a huge source of drag, which is undesirable when you are trying to gain flying speed. So early aviators in underpowered aircraft would try and raise the gear as soon as the aircraft had left the tarmac. Unfortunately because the air is a moving medium, like the ocean is to ships, the wind can drop or change direction very suddenly due to nearby buildings or other orographic features. This drop in wind speed over the wings is the same as a drop in airspeed of the aircraft; if you lose airspeed you lose lift and the aircraft will sink, if your gear is already up then there will be nothing to stop the fuselage hitting the runway."

"Wise folk in aviation introduced a requirement for the monitoring pilot to look at the altimeter or vertical-speed indicator after takeoff, and when a steady rate of climb has been established call 'positive climb' (or something similar). This is to inform the pilot flying that it is now safe to ask for the gear to be raised."

How far in advance of touching down does the gear go down? Brady explained that it depends upon the judgement of the pilot. "In most situations we 'drop the gear' at around four miles out. That is so that we can have the aircraft fully configured and nicely stable 1,000 feet above the runway. On some approaches it may be necessary or more prudent to lower the gear earlier to use the drag to help slow you down, for instance if you are approaching in a tailwind," Brady explained.

Perhaps surprisingly, in all models of Boeing 737 built before 1997 there is a periscope in the cabin, usually under seat D just behind the over wing exit row. The image below is a touch grainy, but you get the idea.

"If you look closely you will see a circular cut-out in the floor carpet about five inches in diameter. (This is) in the unlikely event the first officer will be sent back into the cabin to lift this up and look down the periscope, to see if the landing gear is down and locked or if there is any damage down there."

The periscopes were discontinued from the Boeing 737NG onwards, as Boeing installed a second set of gear indicator lights in the flight deck, independent of the other indicator lights, which indicate if the gear is down and locked.

Looking at the gif above, you'll note that the rear set of wheels on the bogie touch down first. On some aircraft, such as the Airbus A350, the gear is titled forward and the front set of tires touch the ground first. Furthermore, on takeoff on longer aircraft such as the 777-300, the back set of wheels lift off last, providing a little "kick" that helps with clearance to avoid a tail strike — the tail scraping the runway.

"Pilots generally agree that 'trailing link' gear give the most flattering landings," Brady said. However, as it turns out the orientation of the wheels is not so much to aid in landing. What tires touch the runway first, though, is mostly a space-saving design feature for getting equipment to fit inside the wheel well.

With 35 years of experience, Brady has probably had his fair share of firm landings. These days, however, he said his landings are pretty good. "More importantly, they are all safe," he said. "The trouble is that if you ever get complacent you can easily do a terrible landing to literally bring you back down to earth."

"You can usually tell when you have done a smooth landing as you can hear the ripple of applause from the passengers through the flight deck door, especially after a bumpy approach; but I guess a lot of that is relief rather than appreciation from them."

Mike Arnot is the founder of Boarding Pass NYC, a New York-based travel brand, and private pilot who flies with fixed landing gear.

Related stories
When does airline elite status expire?
Act fast: Get a $15 Lyft credit with your Walmart+ subscription
Increased offers available on Barclays cobranded business cards
This top cruise line is now throwing in free tours worth thousands of dollars if you book
Featured image by A350 Landing Gear. Image via Adrien Daste / Safran