Big thrills and bigger splashes: 11 attractions coming to US theme parks in 2023

Articles
Tarah Chieffi is a family travel writer for TPG. Whether she’s sharing tips for planning the perfect theme park trip or finding a kid-friendly hotel, her goal with every story she writes is to inspire families to get out and explore the world.
Follow
Jan. 18, 2023
•
9 min read 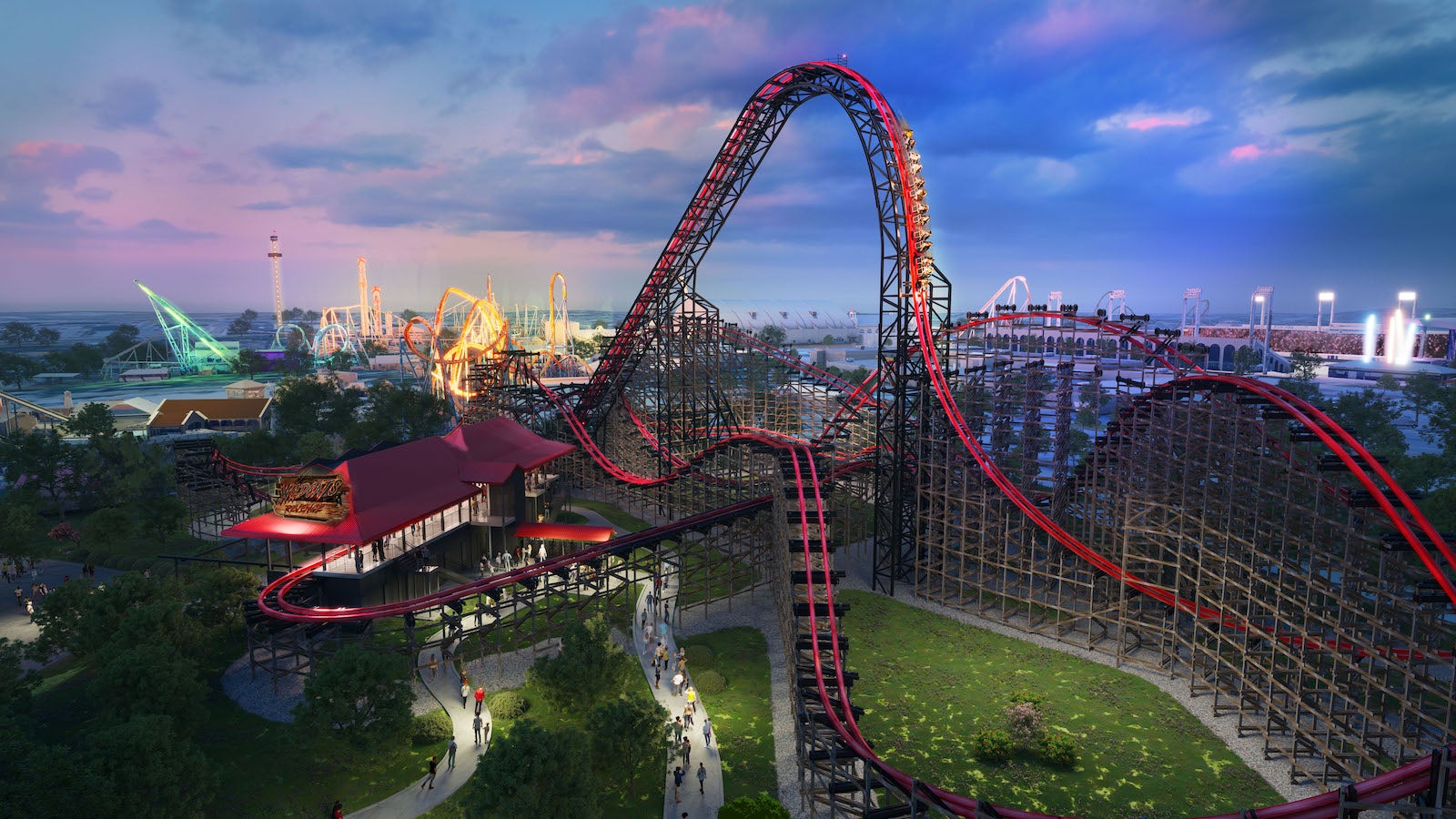 It's only January and 2023 is already shaping up to be a big year for U.S. theme parks — and we're not just talking about Disney.

In fact, we found 11 new roller coasters, thrill rides and water rides opening across the country, and there is nary a mention of Disney on the list (though Disney has plenty going on this year, as well).

If you are ready to feel the wind rushing through your hair as you plummet down a terrifyingly tall hill or you want to sail past silly creatures made from oversized Lego bricks, you've come to the right place.

Here are 11 attractions opening at U.S. theme parks this year that we can't wait to experience.

Legoland New York reopens for the 2023 season on March 31. Just a few months later, when the temperatures rise to a more suitable level for swimming, Legoland will open its newest attraction: a Lego-themed water playground where families can splash, slide and beat the heat.

The water playground will have four waterslides, an interactive water play structure, and a station where you can build and race your own Lego boat. There is also a nearby changing area so you can slip out of your wet swimsuit when you're ready to head for the park's land-based attractions.

The area of Winterhaven, Florida, that is now Legoland Florida Resort was once home to a theme park with elaborate botanical gardens, water ski shows and canal boat rides called Cypress Gardens.

Now, guests can sail through those same historic canals on Legoland's newest attraction — though this time they'll be joined by a rowdy crew of swashbuckling pirates.

Pirate River Quest is an all-ages boat ride (there is no minimum height requirement) that takes guests on a quest to find Captain Redbeard’s lost treasure, which has been stolen by a troop of mischievous monkeys. During the journey, you'll encounter a sunken pirate ship, a menacing Kraken and other larger-than-life Lego creations.

Ever daydreamed about walking through a warp tunnel and joining Mario, Luigi and Princess Peach on their adventures? Soon, you'll be able to at Universal Studios Hollywood in the park's newest land devoted to all things Super Nintendo.

Super Nintendo World's flagship attraction is Mario Kart: Bowser’s Challenge (must be 40 inches to ride). This attraction blends augmented reality and projection mapping technology with physical set pieces to put riders behind the wheel of a real-life Mario Kart race.

Though the land has only one ride, Super Nintendo World has more than enough to keep you busy after you race to the finish and take down the evil Bowser. Throughout the land, there are interactive challenges where you can collect digital coins and try to secure a top score — think battling koopas and punch blocks.

To participate and interact with the land, you'll need to purchase a Power-Up Band, which you can find in the 1-Up Factory gift shop, along with all the souvenirs and clothing you need to complete your experience. When all that gameplay makes you hungry, you can grab a bite to eat at the Toadstool Cafe.

Villain-Con Minion Blast will feature a never-before-seen ride technology that utilizes a motion-based pathway in lieu of a traditional ride vehicle. Guests will wield blasters to fend off villains as they are guided along the pathway, encountering plenty of mischievous Minions along the way.

Villain-Con Minion Blast will be located adjacent to Despicable Me Minion Mayhem at Universal Studios Florida, along with a new Minion cafe and other surprises that Universal has yet to announce. Here's hoping the surprise is Minion dance parties.

Illumination’s Villain-Con Minion Blast is scheduled to open this summer.

When it opens, Serengeti Flyer will be the world's tallest and fastest swing ride of its kind, reaching a top speed of 68 mph and a maximum height of 135 feet. Riders will soar above zebra, giraffes and other animals that call the park's 65-acre Serengeti Plain area home.

Riders will experience multiple negative-G moments (you know, that butterflies-in-your-tummy feeling) as they swing back and forth on this dual-arm ultimate swing ride. The ride will have a 48-inch minimum height requirement.

Serengeti Flyer is scheduled to open in spring 2023.

Busch Gardens Williamsburg's newest coaster will have guests racing through the dark while attempting to escape a cursed castle. DarKoaster is a fully indoor coaster with straddle-style ride vehicles designed to look like snowmobiles (you'll need them to navigate the strange snowstorm raging inside the castle).

DarKoaster is a family-friendly coaster with a 48-inch minimum height requirement and a top speed of 36 mph; it strikes just the right balance between tame and thrilling so the whole family can enjoy the ride. If you manage to escape from the castle, that is.

DarKoaster is scheduled to open sometime in 2023.

Most of SeaWorld San Diego's attractions play into the park's aquatic theme, and its newest coaster is no exception. When it opens, Arctic Rescue will be the longest and fastest straddle coaster on the West Coast. Guests will straddle snowmobile-type ride vehicles as they race through the ice and snow to rescue Arctic animals.

Related: SeaWorld splashes into 2023 with water-themed coasters at all 3 parks

While onboard, you'll experience three launches and a top speed of 40 mph, keeping Arctic Rescue firmly in the family-friendly zone, though an exact height requirement has yet to be announced.

Arctic Rescue is scheduled to open in 2023.

If two of your favorite activities are surfing and riding roller coasters, you're in luck. SeaWorld's new Pipeline: The Surf Coaster is a one-of-a-kind "surf coaster" with stand-up ride vehicles that look like giant surfboards.

Riders will "hang ten" through the coaster's many twists and turns, including five airtime maneuvers and a "wave curl" inversion, all while reaching speeds of up to 60 mph.

Pipeline: The Surf Coaster is an extreme thrill ride, and it will have a 54-inch minimum height requirement. If you have little ones, there are plenty of adorable animals nearby to keep them entertained.

This coaster is scheduled to open in spring 2023.

Rather than a traditional lift hill, Catapult Falls will transport your raft to the top of the 55-foot-fall hill via an open-air elevator. Once you reach the top, you'll plunge down and take off on a fast-paced rapid ride. No minimum height requirement has been specified, yet.

Catapult Falls is scheduled to open in 2023.

In 1996, Hersheypark unleashed Wildcat on the world. Wildcat was a wooden coaster named after "The Wild Cat" — Hersheypark's first roller coaster which opened in the 1920s. When Wildcat closed in 2022, Hersheypark hinted that it might've had a plan to keep Wildcat's memory — and thrills — alive.

The plan is a wood and steel hybrid coaster called Wildcat's Revenge (48-inch minimum height requirement). This is no tame kitty cat. Wildcat's Revenge will hit speeds of 62 mph and climb to a height of 140 feet before diving into an 82-degree drop and flying through four inversions.

Wildcat's Revenge is scheduled to open in summer 2023.

A Smoky Mountain-themed roller coaster is a natural fit for a theme park like Dollywood that is located in the foothills of the Smokies. Big Bear Mountain will take riders on an expedition through the Wildwood Grove section of the park in search of the elusive "Big Bear" that has been spotted in the area.

During your race through the wilderness, you'll reach top speeds of up to 48 mph and climbs to a top height of 66 feet. The minimum height to ride is 39 inches, meaning families can embark on this dangerous journey together.

Big Bear Mountain is scheduled to open in spring 2023.

We're certainly ready to ride after that impressive rundown. Whether you are planning a theme park vacation or live close enough to one of the parks on this list for a quick weekend visit, there are exciting new attractions coming in 2023 for theme park fans of all ages.

Featured image by HERSHEYPARK
Editorial disclaimer: Opinions expressed here are the author’s alone, not those of any bank, credit card issuer, airline or hotel chain, and have not been reviewed, approved or otherwise endorsed by any of these entities.