A $20,000 decision: Comparing points valuations to the value of a particular flight experience

Articles
Ethan Steinberg has been a frequent flier for as long as he can remember. He went from studying abroad in Paris to moving to Shanghai after graduating college, where he covered all things travel in the Asia-Pacific region for TPG.
July 05, 2020
•
9 min read 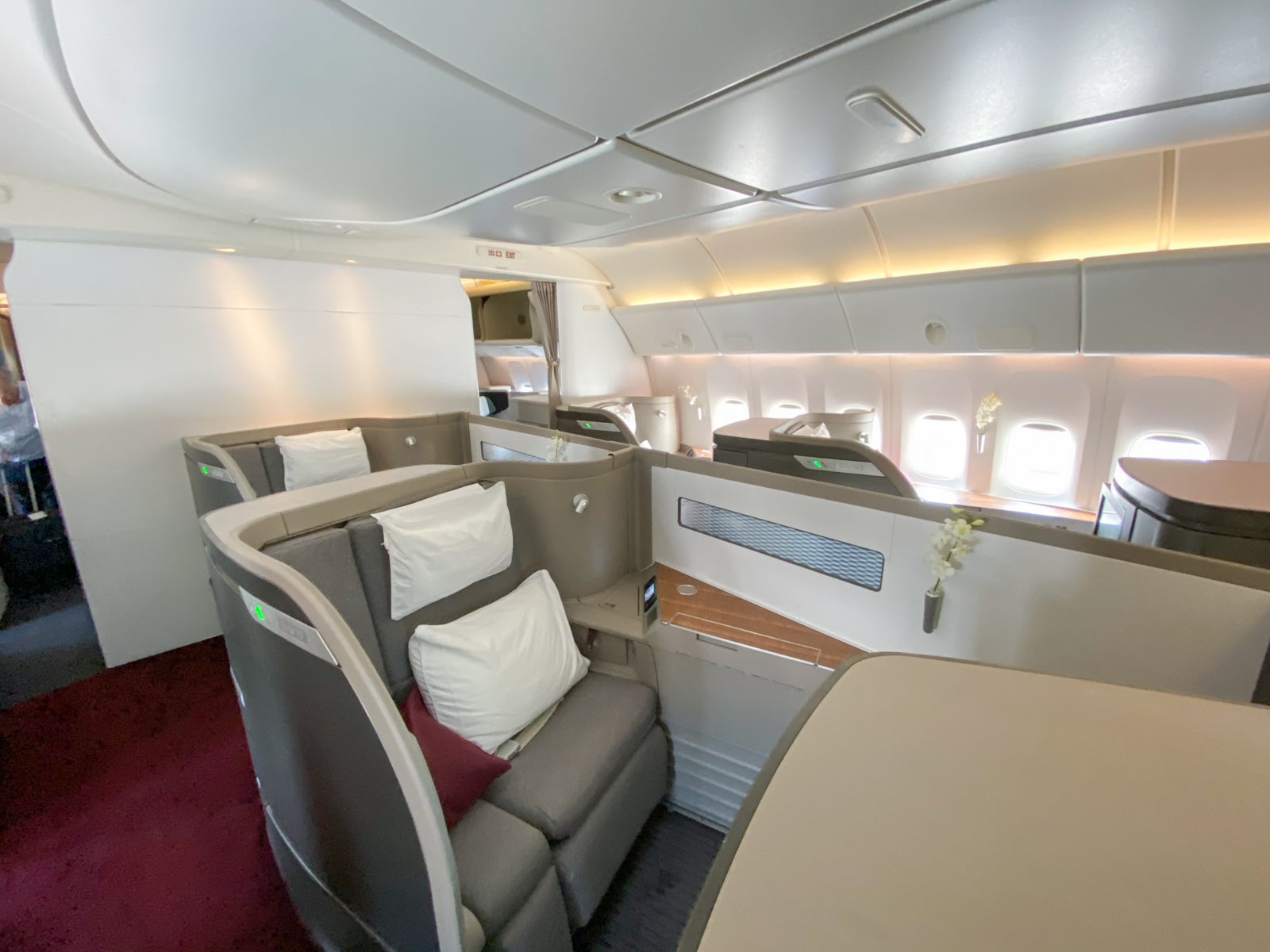 </strong>This is a recurring post, regularly updated with new information. This post makes reference to a number of routes that are currently suspended but are expected to resume once travel picks up.

Editor's note: This is a recurring post, regularly updated with new information. This post makes reference to a number of routes that are currently suspended but are expected to resume once travel picks up.

Points and miles have changed my life for the better in countless ways. Not only have I taken more trips without having to worry about the cost, but I've been able to travel in an unbelievable amount of luxury, flying first or business class more often than not. This is because I focus on redeeming my points for the maximum value possible.

Valuations can be an incredibly useful tool for beginners and pros alike to analyze deals. But we all have to admit that they stop being relevant in certain extreme cases. I'm talking specifically about those insanely expensive international first class redemptions, the brag-worthy ones that make all your friends want to start collecting points as well. So when should you rely on the value of your points, and when does it no longer matter? Let's take a look.

Valuations work well... up to a point (pun intended)

Every month The Points Guy publishes a list of valuations for all the major airline, hotel and transferable points currencies. This guide can be incredibly useful for a couple of reasons. First off, it helps you decide when to use points and when it might make more sense to pay with cash. You can use this formula as a quick shortcut:

Note that you may need to multiple your answer by 100 to convert it from dollars per point into the more common cents per point used in TPG's valuation series. If your answer is higher than the published valuations, you're probably getting a good deal.

The valuations can also help you compare between programs, as no two types of points are created equal. For example, American Express Membership Rewards points are worth a lot more than Hilton Honors points. In fact, based on TPG's valuations, one Membership Rewards point is worth more than three times as much as a Hilton Honors point. So if someone handed you 10,000 points from each currency, one would be worth a lot more than the other.

Of course, you sometimes have to adjust these numbers to suit your own needs. For instance, while Delta SkyMiles are valued the lowest of the three legacy U.S. airlines, SkyMiles might be worth more to you personally if you live in one of Delta's hubs, such as Atlanta (ATL) or Detroit (DTW), and need to fly the airline regularly.

While I'm currently living in Shanghai, I try and make it back to the U.S. for important milestones. My girlfriend's sister graduated from college in May, and so before the coronavirus pandemic hit we had planned to fly back to New York to celebrate with her. On the way back to Shanghai (PVG), I was booked to fly Cathay Pacific's incredible 777-300ER first class from New York (JFK) to Hong Kong (HKG).

I booked this ticket with 70,000 Alaska Airlines Mileage Plan miles — which TPG values at $1,260 — and about ~$75 in taxes. I could've also booked the same ticket for 110,000 American AAdvantage miles and a similar amount of taxes. This is one of my favorite all-time award chart sweet spots, and I was very happy with the deal I got.

I was especially happy to get this flight for nearly free, since the cash cost would have been over $20,000. I've had the opportunity to fly luxurious long-haul first class flights before, but this was by far the most expensive cash value of any of my redemptions (even more than Emirates, Lufthansa and ANA first class).

After subtracting the ~$75 in taxes I paid, the cash value I got for my points was $20,289. This means if we use the equation from earlier...

It would seem I redeemed my Alaska miles at a rate of 28.9 cents each, over 15x higher than TPG's valuation of them at 1.8 cents each. Yes, I'm absolutely thrilled with the deal I got and very excited for this flight... but very little of that has to do with the cents per point valuation I earned or even the cash value of the ticket.

Why you shouldn't care about the numbers

Note that since the time I booked this flight, the coronavirus pandemic has massively disrupted commercial aviation. While Cathay Pacific is still flying between JFK and Hong Kong, it's doing so with an Airbus A350-1000 that doesn't feature a first class cabin.

However even before the pandemic began, the ongoing protests in Hong Kong had weighed heavily on Cathay Pacific's financial situation, cutting the cash price of the ticket nearly in half. At the beginning of the year you could book a one-way first class ticket from JFK to Shanghai for $11,805, or roughly 16.75 cents per point.

At the same time that I was supposed to be taking off from JFK to fly back to Shanghai, a Cathay Pacific flight would have been taking off from Shanghai to complete the journey back to New York, with a stop in Hong Kong. The cost of a first class ticket on that journey? An outrageously expensive $19,942. Note this ticket is identical to my east-to-west itinerary, with the minor caveat that the inter-Asia flight between Hong Kong and Shanghai is operated by a Cathay Dragon A330 instead of a mainline Cathay Pacific A330.

The person flying on this itinerary will enjoy the same priority boarding, in-flight experience, food, drink and seat that I will. So are they really getting nearly twice as much value for their points just because they're flying east and I'm flying west?

Unfortunately, in the airline industry, there's often very little correlation between price and the quality of the flight experience. Of the ~60 one-stop first class flight options Google Flights found on the date I was supposed to travel, Cathay Pacific was responsible for all 12 of the most expensive tickets. Even Emirates, one of the world's best airlines, only wanted ~$11,000 for a first-class ticket, and you could have booked a flight with JAL or ANA — two carriers that can really give Cathay Pacific a run for its money — for as little as $5,600.

JAL also partners with Alaska Airlines, though a first-class flight will cost 75,000 miles. This works out to a redemption value of "just" 7.5 cents per mile. While I think Cathay Pacific is a better deal in this case, I certainly don't think it's a 4x better deal as the valuations would imply. While personal preference and the type of points you have available might push you toward one redemption over the other, it's hard to argue from a purely numerical perspective which one would be the best "value."

Yes, there's certainly a lot of variation in the quality of first class products being offered by airlines today. But often this variation is minimal, especially when you're comparing two options on the same type of plane, such as a 777 or A380. Rarely, though, is that variation actually reflected in the cash price of a ticket. Supply and demand are the driving forces here, and you might find little changes — like flying east versus west, or changing your departure by a day — can change the cash price of your ticket by twofold.

So don't get too hung up on these values. I've gotten over 10 cents per point (cpp) from nine different redemptions over the last few years, going as high as 28.9 cpp on this Cathay Pacific first-class redemption. But near the bottom of the list is one of the best flights I've ever taken: a 22-hour Emirates first class extravaganza that netted me only 10.5 cpp. Valuations can be a useful system for analyzing and record keeping and for comparing two different bookings options, but when cash prices get so exorbitantly out of hand, they stop making sense for anything other than bragging rights. So the next time you're booking a first class mileage ticket, focus on spending as few miles as possible and use flight reviews to pick the best experience, not the most expensive ticket.

Related stories
Should you buy Marriott points with a 50% bonus?
5 secrets to getting a luxury cruise for less
Deal alert: Widespread Air Tahiti business class award space to French Polynesia
This no-annual-fee card earns 2% cash back on every purchase — and automatically applies your rewards
Featured image by (Photo by Emily McNutt/The Points Guy)