Articles
Kyle Olsen is a points and miles reporter at TPG. Since the age of 16, he has been pursuing elite status, visiting 75 countries across six continents. His passion for travel began with his own business which he started at age 13. He is now an expert at maximizing points, miles, and elite status across all major programs.
Aug. 08, 2022
•
16 min read 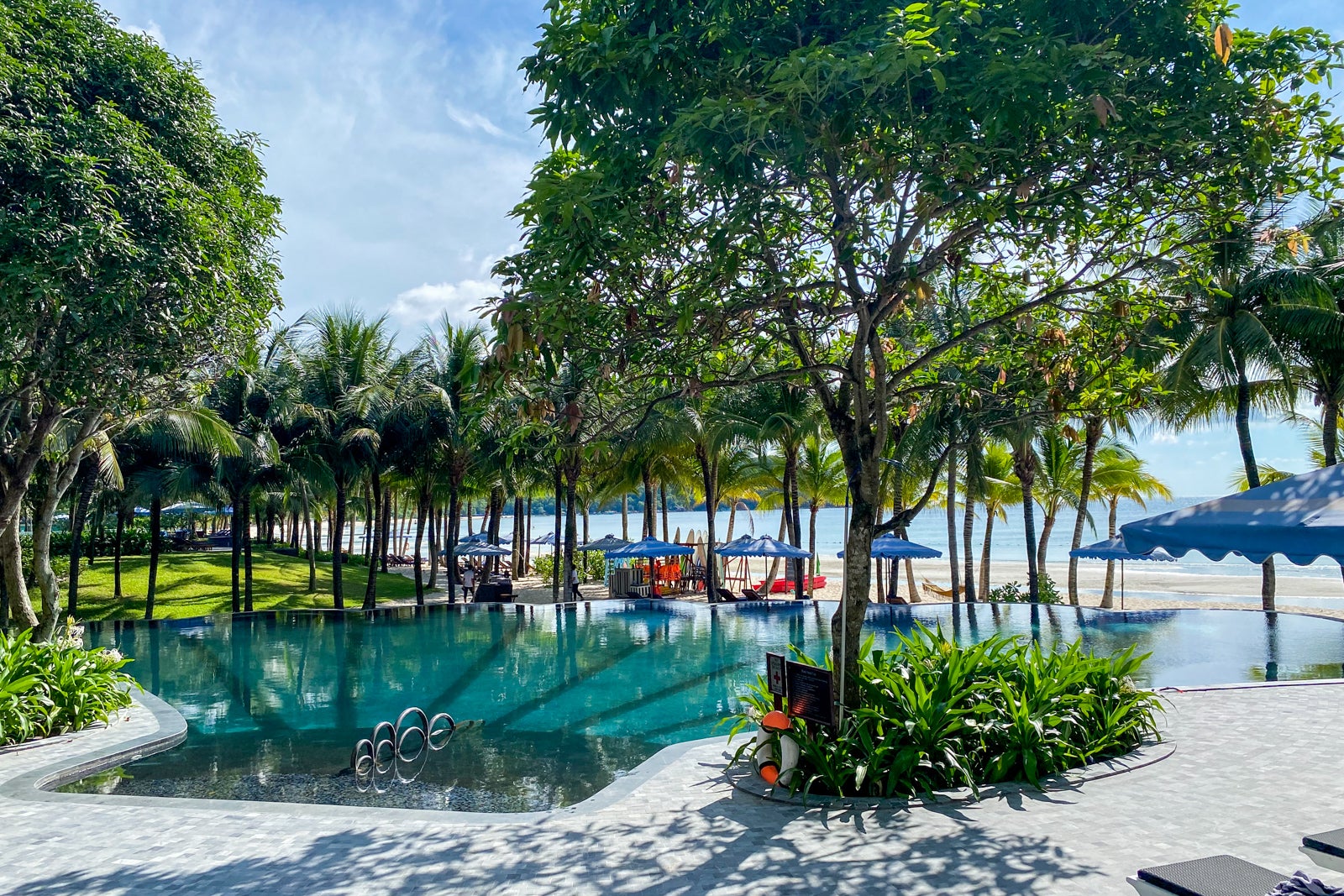 Editor's note: This post has been updated to reflect the correct percentage changes for individual hotel award prices. When the post was first published on Aug. 8, these numbers were populated from an incorrect data source.

At the end of March, Marriott retired its award categories in favor of dynamic pricing. Shortly after the implementation of dynamic pricing, we conducted our own analysis on a cross-section of the portfolio we believe represents a wide range of properties across the 30 Marriott brands in countries around the world.

Now, four months into dynamic pricing, we've refreshed our data on the same properties we surveyed earlier in the year to see how, if at all, the value of Marriott points has changed.

Our analysis revealed an increase in both cash and award prices at Marriott hotels, which we expected. But certain destinations, most notably Hawaii, have seen significant devaluations of Marriott points.

In this post, we'll dive into the data and explore how the value of points has changed across various regions and brands. And then, we'll update our overall valuation of Marriott points based on the new numbers to give you a baseline for how much your Marriott Bonvoy points are worth.

But first, let's review our methodology.

For more TPG news, deals, and points and miles tips delivered each morning to your inbox, subscribe to our daily newsletter.

At a high level, our analysis compares both after-tax cash and award rates of Marriott properties.

We pulled 20 properties from Marriott’s list of its most popular properties for points redemption worldwide. This includes many well-known Marriott properties, like the Wailea Beach Resort in Hawaii and the Walt Disney World Swan in Orlando. Then, we added in a few staff favorites, like the JW Marriott Scottsdale Camelback Inn Resort & Spa and the Bodrum Edition.

But our list goes beyond luxury hotels. That's why we included properties like the Moxy Paris Bastille, the SpringHill Suites Springdale Zion National Park and the Courtyard Agra in India. Much to our surprise, many budget-friendly hotels were on Marriott’s list of most-redeemed properties, too.

When we ran our analysis in the spring, we pulled award and cash prices from May, June, November, December and January to find points value during some of the most high-demand travel times. We've kept the same months, but the data from the months of May and June now look at 2023 prices instead of 2022 prices.

Our analysis now has 300 dates that were searched for each property — more than 30,000 data points in all.

Of course, by no means is this a comprehensive analysis, but it allows us to compare dynamic pricing data from earlier in the year with updated data. Pulling this relatively broad range of dates also helps us find an average value for different seasons.

We used this data to calculate an “average” redemption rate for each individual property we priced out. And from there, we calculated the overall average value for each region, type of hotel and season. We also calculated an overall value of Marriott Bonvoy points, which we will share with you later in the article.

Again, this methodology doesn’t capture all dates and properties, but it does help us calculate the impact of Marriott dynamic pricing — and find a rough value of Marriott Bonvoy points.

Knowing how to make the best points redemption at the best time is easy with the free TPG App! Download it for free today.

US mainland hotels and resorts

Starting at home, here's our list of hotels in the continental U.S., spanning a number of states and cities.

Overall, our average value for U.S. properties has dropped from 0.77 cents per point to 0.73 cents per point. Some hotels have significantly changed since our last data crunch. For example, the SpringHill Suites by Marriott Springdale Zion National Park is now providing a mediocre 0.41 cents per point, which is a 45% drop, bringing the property far below our current valuation of Marriott points at 0.84 cents apiece.

On the flip side, the Moxy South Beach now provides a much better redemption rate than what we saw in the spring — increasing from 0.61 cents per point to 0.96 cents per point. Of course, this might not be the case for all dates, but it’s worth keeping in mind.

Our four properties in Hawaii saw some of the most significant devaluations, including:

Although our data set isn't as comprehensive in Hawaii, the redemption rate has dropped from 0.83 cents per point to 0.70 cents per point — that's significant. While you can still get a solid value when redeeming Marriott points at some properties in Hawaii, it's not as good of a deal as before.

Also, keep in mind that it can be hard to find award availability at some Hawaiian properties during peak travel times, so you’ll want to start planning your trip well in advance.

Luckily, we're mostly over the grim news, and things are going to start looking a bit better as we shift to international properties.

One popular way to redeem Marriot points is on high-end resorts abroad. These redemptions have historically provided outsize value and thus were some of the hotels we feared would be significantly affected by dynamic pricing. Here’s how the numbers have changed:

Whew! No cumulative devaluations here. Consistent with our previous analysis, this shows that you can still get excellent value from your Marriott points at high-end resorts abroad, with these properties getting an average of 1.01 cents per point in value. But like in Hawaii, you might run into trouble actually finding award space at some of these properties during peak seasons.

Marriott has a large footprint in Europe, with most major cities having at least one property. For our nine European hotels, here's what we found:

Our European hotels indicate a devaluation from 0.87 cents per point to 0.85 cents per point in value. This is a relatively small data set, but we made an effort to include a mix of high-end and mid-tier Marriotts to give a leveled average value.

Looking at Asia, we ran the numbers again at our same eight properties:

Interestingly, our data still shows that our eight Asian hotels provide an average redemption rate of 0.8 cents per point. The Westin Tokyo significantly skews that data, however.

While these eight hotels can’t provide a comprehensive figure for the precise valuation of all hotels throughout Asia, our Asia hotel searches revealed an average of 0.81 cents per point in value. This figure is roughly on par with our current valuation of Marriott Bonvoy points at 0.84 cents per point.

How much are Marriott Bonvoy points worth in August 2022?

Now, the moment that you've been waiting for.

The hotel giant committed to keeping 97% of hotels within their previous off-peak-to-peak pricing bands through the end of the year. But I am fearful that a widespread devaluation is coming with the new year.

Even with this devaluation, there are still sweet spots in the Bonvoy program. Based on our tests, luxury resorts are showing a better-than-average return in many cases. And while some of these might not be as good of a deal as they were in the pre-dynamic era, they still represent a chance to get solid value from your points.

But remember, our testing isn’t the be-all and end-all. We couldn’t test every date across every property. Your best bet is to search for those properties at which you want to redeem your points — and if you have flexibility in your travel dates or destinations, you’ll have a greater chance of finding a good redemption.

For example, look for high-end properties during low seasons or book weekday nights instead of weekend nights if your schedule allows.

Regardless, one thing is for sure: Marriott award pricing is now more variable than in the past, and we don’t know the extent to which this will change even further when pricing bands go away entirely next year.

As I'm predicting that this 5% devaluation is merely foreshadowing a larger one next year, I am beginning to miss opening my Marriott Bonvoy app and seeing Category 1-8 hotels.

The loss of the published award chart can make it much more challenging to set goals for a redemption at one of Marriott's 8,000 hotels.

Dynamic pricing means that award rates across the Marriott portfolio can vary from night to night. And while just 3% of participating properties can price outside of the old categories as of now, all Marriott locations will have this possibility in 2023.

It's not too early to start planning your award stays for spring break and summer 2023. You'll want to lock in a reservation before the end of the year, when all Marriott hotels can price outside of their category rates. And of course, you can always rebook your stay if it drops after Jan. 1.

As these changes happen, we'll revisit our data set to keep you apprised of future changes in the value of Marriott points.

Featured image by (Photo by Kathryn Romeyn/The Points Guy)
Editorial disclaimer: Opinions expressed here are the author’s alone, not those of any bank, credit card issuer, airline or hotel chain, and have not been reviewed, approved or otherwise endorsed by any of these entities.