Articles
Melissa Klurman is a travel reporter and the winner of a Lowell Thomas Gold Award for travel writing.
Follow
Nov. 18, 2021
•
6 min read 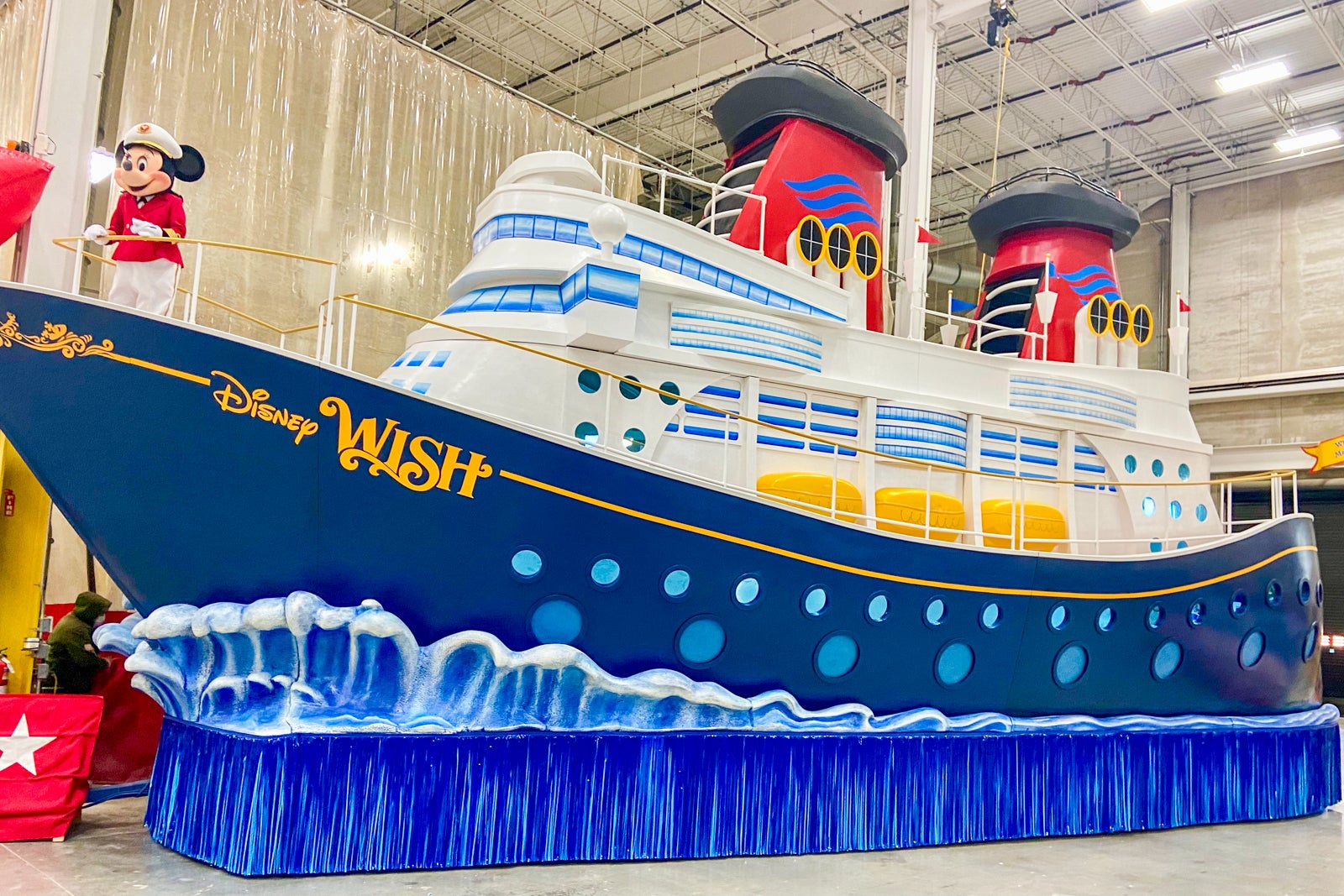 What's three stories tall, has a half-mile of fringe and rolls down Broadway?

After a year where the parade had to scale down and the future of New York City-based entertainment seemed shaky, to say the least, I was beyond giddy as I entered Macy's massive float warehouse in New Jersey this week to preview this year's new entries for the iconic parade.

Within the 72,000-square-foot facility are six new floats, fully extended to their epic parade size nearly touching the roof of the hangar-like space. (Then, says spokesperson Orlando Veras, they'll need to folded at their seams into just a 12 foot by 8 foot space, to fit through the Lincoln Tunnel.) They'll join 22 already existing floats, 36 balloons and nearly 1,000 performers as part of the annual Macy's Thanksgiving Day Parade, which is celebrating its 95th anniversary this year.

And, interestingly, of the six new floats that I previewed, three are travel-related, with offerings from Disney Cruise Line, Kalahari Resorts and Louisiana Office of Tourism. Proof, I think, that travel is at the forefront of everyone's thoughts these days.

Ready for the parade? Read on for the rundown of parade float highlights, starting with our travel faves.

This was my favorite float, and yes, it's in large part because I'm a Disney fan. But also the sleek, realistic design of the Disney Wish cruise ship (which sets sail in 2022) made to scale and decked out with Disney-level details really was dazzling, without using an abundance of glitter. Captain Minnie was up at the helm and her golden insignia was at the bow. And check out the "hidden Mickey" portholes. Rick Pomer, creative director of the Macy's Parade Studio, says they were designed with reflective glass so that parade-goers will be able to see themselves as the ship cruises down the street. He also pointed out the shimmering aqua fringe along the bottom of the float, which should, hopes Pomer, catch the sunlight and look like water.

And although only Minnie was waving "hi" on the day of the preview, there will be 15 total characters on parade day (Disney says that Minnie, princesses Tiana and Cinderella and Jasmine, as well as Aladdin, will be there, and the rest will be a "surprise"). Plus, Jordan Fisher will perform an original Disney Cruise Line song, "Together We Set Sail."

This tribute to everything that makes Mardi Gras swing in Louisiana and let the good times roll in the Big Easy and the bayou, made another big impression. And I mean BIG -- Macy's says this is the longest float ever built for the parade. The giant gator that creates the base of the float stretches 60 feet (the length of a bowling lane), and its massive jaws open and close as it revs down the road. Up close the gargantuan's gator's mouth was pretty intimidating, but the colorful houses, flowers, beads and paddleboat made me crave beignets and crawfish.

A performance by Jon Batiste brings beats to the bayou during the parade.

The African-themed waterpark and resort group, Kalahari, has a massive, and I mean massive float -- three full stories of stacked waves, elephants, waterslides and even a surfing rhino. I've been to the waterpark's location in the Poconos, and the float does capture the frenetic, over-the-top energy of the indoor, adrenaline water rides (and I didn't even see the fake "water" mylar and glitter that will be shooting out of the pools ad elephant trunk). Also, Nellie will be performing -- but not at the top of the dizzying three-story float, Pomer assured me.

Macy's calls this a "specialty unit" comprising three separate moving pieces. Oh, and the "gravy boat" centerpiece is officially a "floalloonicle," according to Macy's, which is part float, part balloon and part vehicle. But yes, they still consider it a "float." Whatever you call it, I think it's going to become iconic -- there's something instantly nostalgic about the anthropomorphic drumstick in gravy and wide-eyed spinning mashed potatoes that made me think of the smiling 1970s Orange Bird from the Florida Citrus Council. There's no big-name performers with this, but you will spot the costumed "gravy pirate," sure to be a Halloween favorite next season.

Birds of a Feather Stream Together, Peacock

Flashy, flash, flash. The streaming service is all glitz-a-go-go with its three-story bird covered in metallic paint, glitter, mylar, and fringe. I couldn't quite make eye contact with the soaring Peacock from my spot on the warehouse floor, but it doesn't much matter since this is definitely designed for television viewing -- it's actually the first float ever to stream a live feed. The camera is perched on the peacock, while lots of lights circle the float and monitors in the back show the "birds-eye" view. The cast of the show 'Girls5eva' -- Sara Bareilles, Renée Elise Goldsberry, Paula Pell and Busy Philipps -- will perform on the float.

Neither the tallest or the longest, the most innovative or technologically advanced, I still appreciated this small float for its sweet reindeer Tiptoe. (There weren't any details on his origin story; maybe he's Dancer's nephew?) Tiptoe is a Macy's creation, and will also be debuting as a "heritage" balloon (these are created by Macy's are roughly half the size of the "pop culture" reference giant balloons.)

Although I didn't get a chance to see any of the Macy's "giant" balloons inflated, I was able to view the detailed replicas the studio creates as part of the production process. New balloons floating in for 2021 are Ada Twist, Scientist; Baby Yoda; Ronald McDonald and Pikachu & Eevee from Pokémon.

Featured image by (Photo by Melissa Klurman for The Points Guy)
Editorial disclaimer: Opinions expressed here are the author’s alone, not those of any bank, credit card issuer, airline or hotel chain, and have not been reviewed, approved or otherwise endorsed by any of these entities.