Articles
Ethan Klapper is a senior aviation reporter at TPG who focuses on the operational side of the airline industry.
Follow
March 20, 2022
•
7 min read 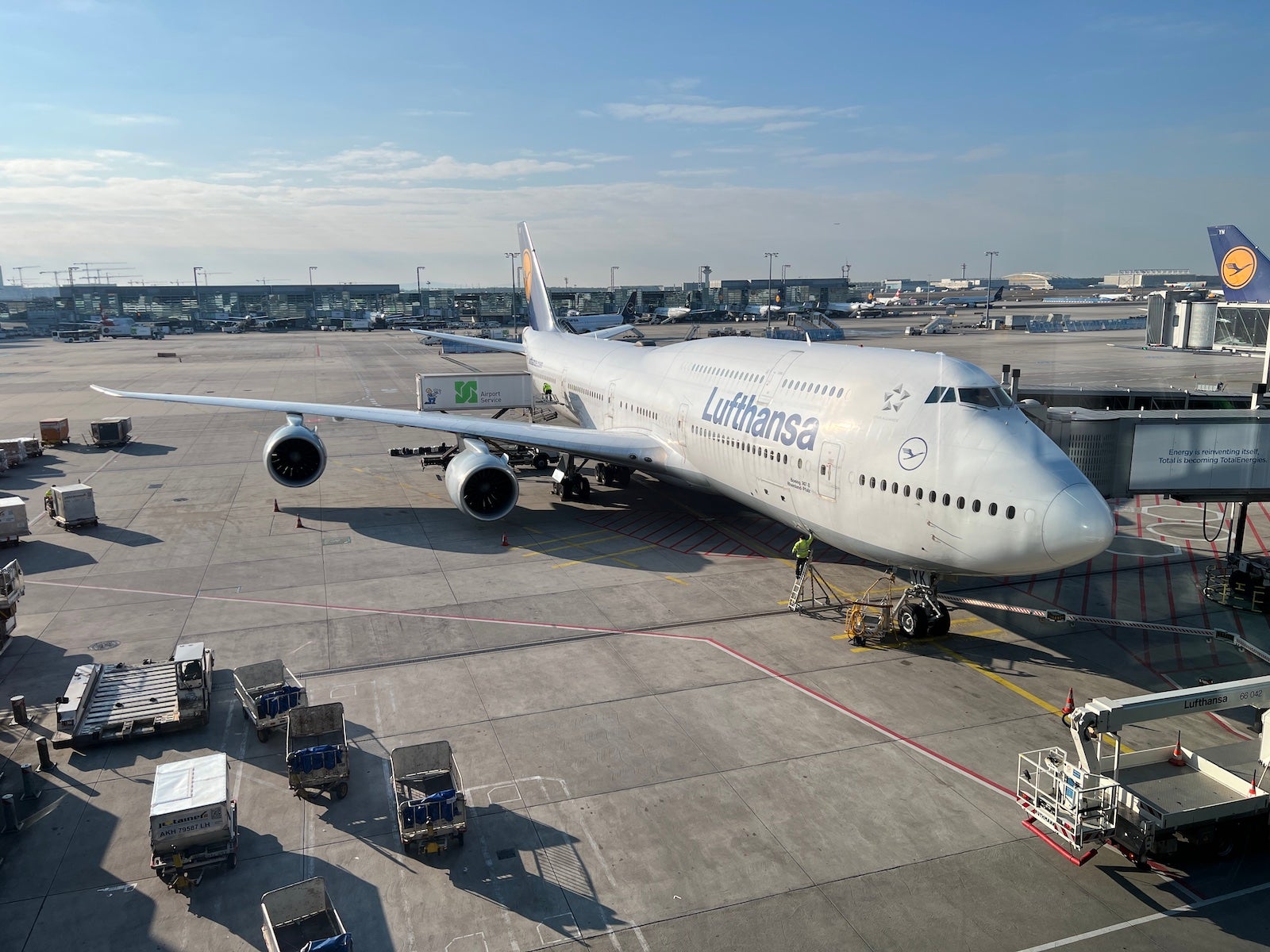 It's been a tough few years for the Boeing 747.

Then came the COVID-19 pandemic, and we saw British Airways, Virgin Atlantic and Qantas all bid farewell to the "Queen of the Skies" in a relatively short period of time.

At this point, when it comes to the Boeing 747, I take nothing for granted — nothing.

The mere existence of the 747's upper deck is an ironic story of how Boeing designers and engineers thought the jumbo jet would ultimately have a limited passenger role.

During the design phase of the 747 in the 1960s, the Boeing 2707 supersonic transport (SST) was on the horizon, and that was believed to be the future of passenger air transportation. In Joe Sutter's book, "747: Creating the World's First Jumbo Jet and Other Adventures from a Life in Aviation," the manager of Boeing's 747 design team describes how the Queen's distinct bulge was created to allow for easy loading of cargo through the aircraft's nose — Boeing's bet that the 747 would live on mostly as a freighter.

The American SST never happened, and 52 years after the 747 entered service with Pan Am, the plane is still hauling passengers across oceans and around the world.

It's also a very popular freighter. In fact, the last 747 produced is scheduled to roll out of Boeing's gargantuan Everett, Washington, factory by the end of this year.

But given the events of the last few years, it feels like the 747 passenger variants are something of an endangered species even though the newest generation of the 747-8 variant only entered service 10 years ago.

So, when I saw that Lufthansa (an early and prominent 747 operator) was bringing the Queen back to my home airport of George Bush Intercontinental Airport (IAH) in Houston after its second COVID-era absence, I knew I had to jump at the opportunity to fly on it. What better way to savor the moment than by flying on the upper deck, a truly magical AvGeek experience?

My girlfriend and I had a large stash of Avianca LifeMiles that we purchased before the pandemic and wanted to use. We knew we wanted to go to Europe, and we noticed that flying round trip in business class to Frankfurt, including the return on the Queen, was within our budget.

So, we went for it. For 122,760 LifeMiles and $211.17 in fees each, we flew to Frankfurt Airport (FRA) on Air Canada via Toronto Pearson International Airport (YYZ) and returned on the Queen.

That return flight was worth every mile and penny. The chance to ride on the upper deck of a 747 for the first time was the part of the trip I was looking forward to the most. Could you blame me?

Entering a Boeing 747 always feels like you're walking into a vast cathedral of modern engineering — it's huge! Not Airbus A380 huge, of course, but when boarding one of these incredible machines, you never feel like you're entering a metal tube. (I was on a plane recently that very much felt like a metal tube, so I can confidently say that the 747 feels very different.)

Entering the Queen through door 1L and passing through the downstairs business-class cabin, I felt a tad bit bad for the people in those seats who wouldn’t get to experience the upper deck (in truth, unless they were AvGeeks like me, they probably didn’t care). Any 747 experience is great, but my business-class experience on the upper deck would truly be special, I said to myself.

While schlepping a rollaboard bag up the 747's staircase wasn't the easiest thing in the world, it was more than worth it. It's certainly easier than it would have been on earlier 747 variants, which featured a now-iconic spiral staircase. I quickly noticed the two windows over the staircase — a new feature for the 747-8. Those windows even had their own window shades.

The first thing that hits you when you reach the upper deck for the first time is that this is not a narrow-body experience bolted to the top of a wide-body plane. It really does feel wider and more spacious, especially when configured in a common 2-2 business-class configuration.

Not only does the upper deck feature Boeing's modern space bins — a design hallmark of the 787 Dreamliner and late-model 737s — but it also has a ton of extra storage space in the form of side bins. These deep side bins were large enough to hold two backpacks and were more convenient than having to store personal items in the overhead bin, as is common when flying a premium cabin product. It also served as a convenient shelf to store pre-departure beverages, plus service items like pillows during the flight.

The side bins really made Lufthansa's somewhat-dated business-class hard product — one that lacks industry-standard direct-aisle access — a lot much better.

As for the flight itself, it was great. There were three flight attendants serving the upper deck: two who interacted more with passengers and a third who was working the galley assist position (yes, the upper deck has its own galley). The service felt more personalized as a result — yet another perk to sitting upstairs.

The 747's upper deck is a unique AvGeek mecca that enthusiasts should experience in the next few years before the remaining passenger variants are retired or converted to freighters. Lufthansa’s 747-8s could easily fly passengers for another decade, as could Korean Air’s and Air China’s, but there’s truly no way to know for sure just how much time we have left to fly this plane at any of the airlines still flying it.

This summer, Lufthansa has plans for an expanded 747 schedule from its Frankfurt hub, which will include both the 747-400 and the 747-8. Here's where you can find it this June:

Booking a business-class seat on Lufthansa via the airline's Star Alliance partners, including Avianca LifeMiles (as I did), United MileagePlus and Air Canada Aeroplan, is not particularly difficult, especially if you're flexible. After all, you can transfer American Express Membership Rewards points, Capital One miles and Citi ThankYou points to LifeMiles and Aeroplan, as well as Chase Ultimate Rewards points to MileagePlus.