Articles
Ethan Klapper is a senior aviation reporter at TPG who focuses on the operational side of the airline industry.
Follow
March 13, 2022
•
9 min read 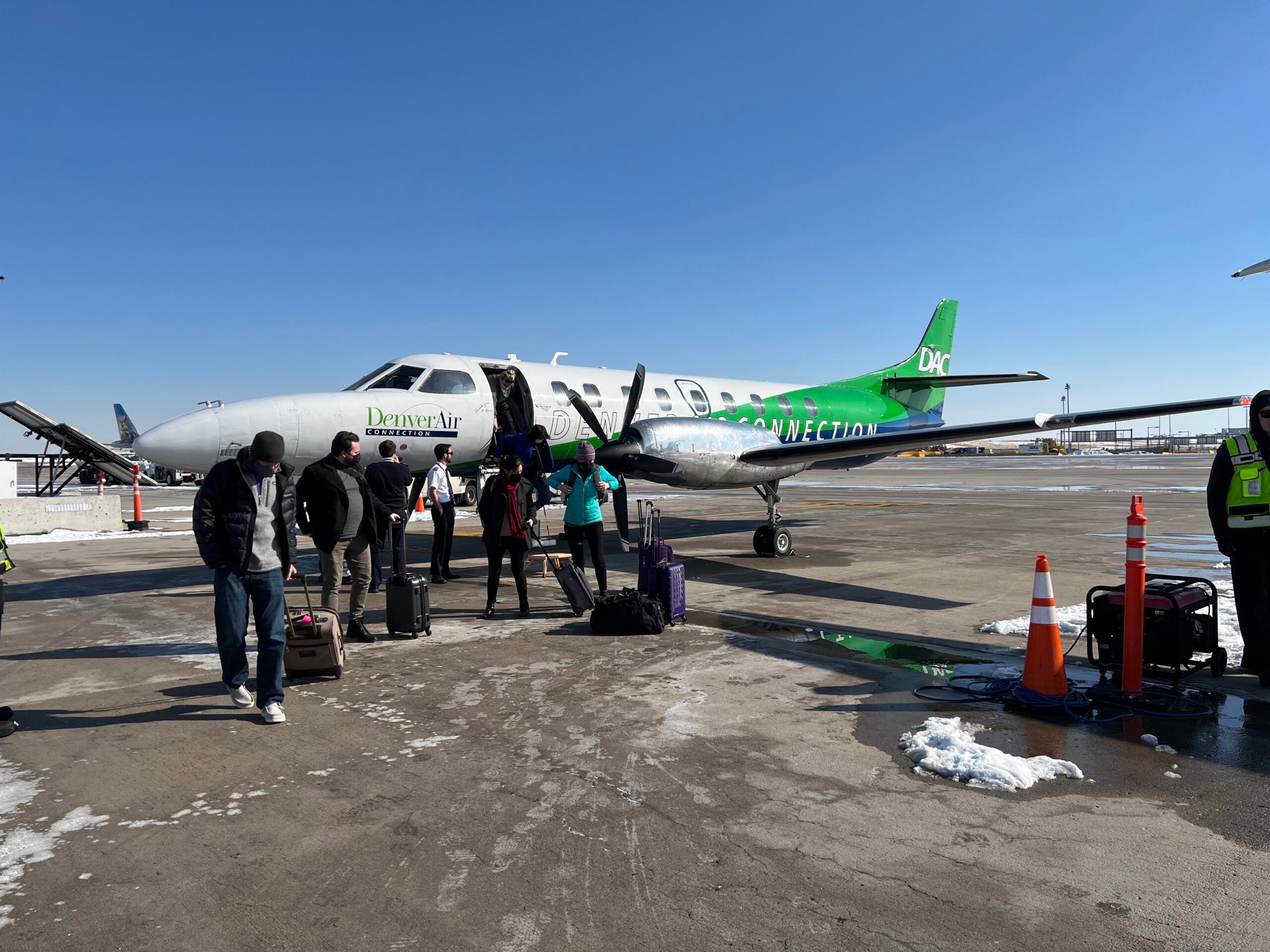 Flying the Fairchild Swearingen Metroliner, the one-of-a-kind turboprop that’s become an AvGeek delight
This post contains references to products from one or more of our advertisers. We may receive compensation when you click on links to those products. Terms apply to the offers listed on this page. For an explanation of our Advertising Policy, visit this page.

Did you know that it is possible for a plane to simultaneously be cramped and roomy?

I didn't, either, until I recently took a flight aboard one of the most unique passenger planes flying in the U.S. right now, the Fairchild Swearingen Metroliner. This plane was popular with regional airlines in the 1980s and 1990s, but now just a single airline operates it — and on a single route.

I recently flew this plane on that route, from Denver International Airport (DEN) to Alliance Municipal Airport (AIA) in Nebraska and back — service subsidized by the federal government's Essential Air Service program, which provides a subsidy to airlines to maintain air carrier service to small airports that would not otherwise be commercially viable. This Metroliner is operated by Key Lime Air, which brands its passenger operations as Denver Air Connection and receives approximately $2.4 million a year in subsidies from the U.S. Department of Transportation to operate this route.

The plane, manufactured in Texas, is affectionately nicknamed the "San Antonio Sewer Pipe." A quick look inside, and you can easily see how it got the "sewer pipe" nickname — thankfully only in shape, not in smell.

This aircraft is designed to hold 19 passengers, but for regulatory reasons, it is configured to hold just nine in a 1:1 configuration. Keeping the capacity at nine allows Key Lime Air/Denver Air Connection to employ pilots with fewer flight hours than are required to work at larger regional airlines. This provides a lifeline to smaller airlines that desperately need pilots to operate these unique aircraft, and it provides those pilots with an opportunity to build their time toward working at larger airlines, a win-win for both sides.

It's also mostly a win for passengers. As a result of the nine-seat cap, this plane features some of the best legroom you can find anywhere. But there is a trade-off: The seats are rather small, and the seat in the first row on the right side of the plane actually has very little legroom.

Not that you're on the plane for that long. The flight from Denver to Alliance took just 34 minutes, while the return took a slightly longer 49 minutes, thanks to headwinds and some vectoring that was required to sequence us into the busy airport.

The route is 180 miles as the crow flies, and 244 miles by road. In fact, I can report that a one-way Uber from the Denver airport to the Alliance airport would have cost just $248 (before tip) that afternoon. How do I know? During a slight predeparture delay caused by malfunctioning ground service equipment, someone on board looked it up as a last-resort alternative. Split four ways, that would've been $62 — or just $13 more than I paid for my one-way flight to Alliance.

Both my actual flights were uneventful. As with many small propeller planes, the cabin was loud, so noise-canceling headphones are a must. The little Metroliner also felt very susceptible to turbulence. We encountered some moderate clear-air turbulence en route from Denver to Alliance that really gave us a nice jolt — something that would have likely been a much smoother ride in a larger jet-powered aircraft.

A memorable experience in Alliance

Perhaps the most interesting part of the experience was the actual airport in Alliance.

When I arrived in Alliance, a city in western Nebraska with a population of 8,151, I needed a boarding pass. Denver Air Connection doesn't let you purchase a round-trip, same-day, out-and-back DEN-AIA-DEN reservation. Its reservation system requires at least 60 minutes of time on the ground — I was only scheduled to be on the ground for 25 minutes — so I was on two separate reservations. But the customer service agent working the check-in desk at DEN told me not to worry. While he couldn't check me in for AIA-DEN, he said he'd "send a message" to the station in Alliance to let them know I was coming and to not cancel my inbound reservation.

One of the real utilities of the Alliance flight is that Denver Air Connection interlines with United Airlines at its Denver hub. It's not a codeshare, or United Express, but when Alliance residents plan on traveling somewhere beyond Denver, they're able to purchase their entire reservation on United.com. They receive a boarding pass at the Alliance airport for both their Denver Air Connection flight and their United flight, and checked bags will be delivered to their United flight as well. For instance, a passenger in front of me held a boarding pass for a United Express flight that would take him to Knoxville, Tennessee, after we landed in DEN.

As I deplaned, I told the agent by the door to the terminal that I still needed to check in. "I need to finish unloading the bags — just go to the counter and wait for me and I'll be with you in a few minutes," she said.

What I found was a small waiting area, complete with some vending machines and standard-issue Transportation Security Administration posters. A couple of chairs were also set up. A deputy from the sheriff's department was there, presumably to help provide security.

As for the agent I encountered earlier by the door, she seemed extra familiar as she checked me in. She'd appeared in a memorable video by Noel Philips, a United Kingdom-based aviation vlogger who’s made a name for himself with videos that feature him flying obscure aircraft in obscure locations. The agent, who was just as friendly to me as she was to Noel, mentioned that she sees a lot of AvGeeks passing through Alliance to do exactly what I was doing. My reservation, it turns out, was never at risk of being canceled. She expects AvGeeks by default.

Perhaps the most unexpected part of my experience was going through TSA screening in Alliance. Who knew that I would be able to experience full TSA PreCheck at one of the least-used commercial service airports in the lower 48 states, provided by some of the nicest TSA officers I've encountered? I was expecting to get wanded or a pat-down — not the experience I’m used to at much larger airports.

More: Why you should get TSA PreCheck and Clear — and how you can save on both

There were four TSA officers working the checkpoint that day. Remember, the Metroliner (the only airline service at AIA) holds nine passengers. Most days, there are two departures from Alliance — and some days just one departure. TSA has minimum staffing requirements for its checkpoints, but four officers for a maximum of nine passengers at a time is an impressive ratio!

The friendly agent working the ID-check station was so excited when she noticed I had TSA PreCheck. There are so few passengers that there was no confusion about which bags got PreCheck and which didn't, so this was the real deal, full PreCheck experience. "PreCheck Lite" — when TSA requires you to sometimes take liquids and/or electronics out of your bag — was not required in Alliance!

It all happened in a relatively small room. With a full load of nine passengers on the return flight to Denver (we were also full on the way to Alliance), four TSA officers and the standard-issue bulky screening equipment that you'd find at any major airport, space was tight.

It was a surprisingly long taxi to Runway 30 at AIA for departure. For its low number of passengers, Alliance Municipal is actually a surprisingly large airport — a former Army airfield that was used during World War II.

I sat closer to the front on the return to Denver, allowing for some neat flight deck views. Denver Approach Control routed us over the airport, so we also got some great AvGeek views of an actually large airport.

But now my time riding the only Metroliner route in the U.S. had come to an end. I enjoyed every minute of it. From the unique plane to the unique TSA experience in Alliance, I'll be talking about this trip for a long time.

If you'd like to experience this flight as well, tickets are $49 each way, bookable on Denver Air Connection's website. Connecting itineraries can be purchased on United.com.

From June 1, the Metroliner gets a second Nebraska EAS route. That's when Denver Air Connection will begin service from Denver to McCook Ben Nelson Regional Airport (MCK). It's a route that's 38 miles longer than Alliance. The more time in the Metroliner, the better ... right?

Featured image by Denver Air Connection/Key Lime Air Swearingen Metroliner seen at Denver International Airport, Friday, Feb. 25, 2022. (Photo by Ethan Klapper/The Points Guy)
Editorial disclaimer: Opinions expressed here are the author’s alone, not those of any bank, credit card issuer, airline or hotel chain, and have not been reviewed, approved or otherwise endorsed by any of these entities.