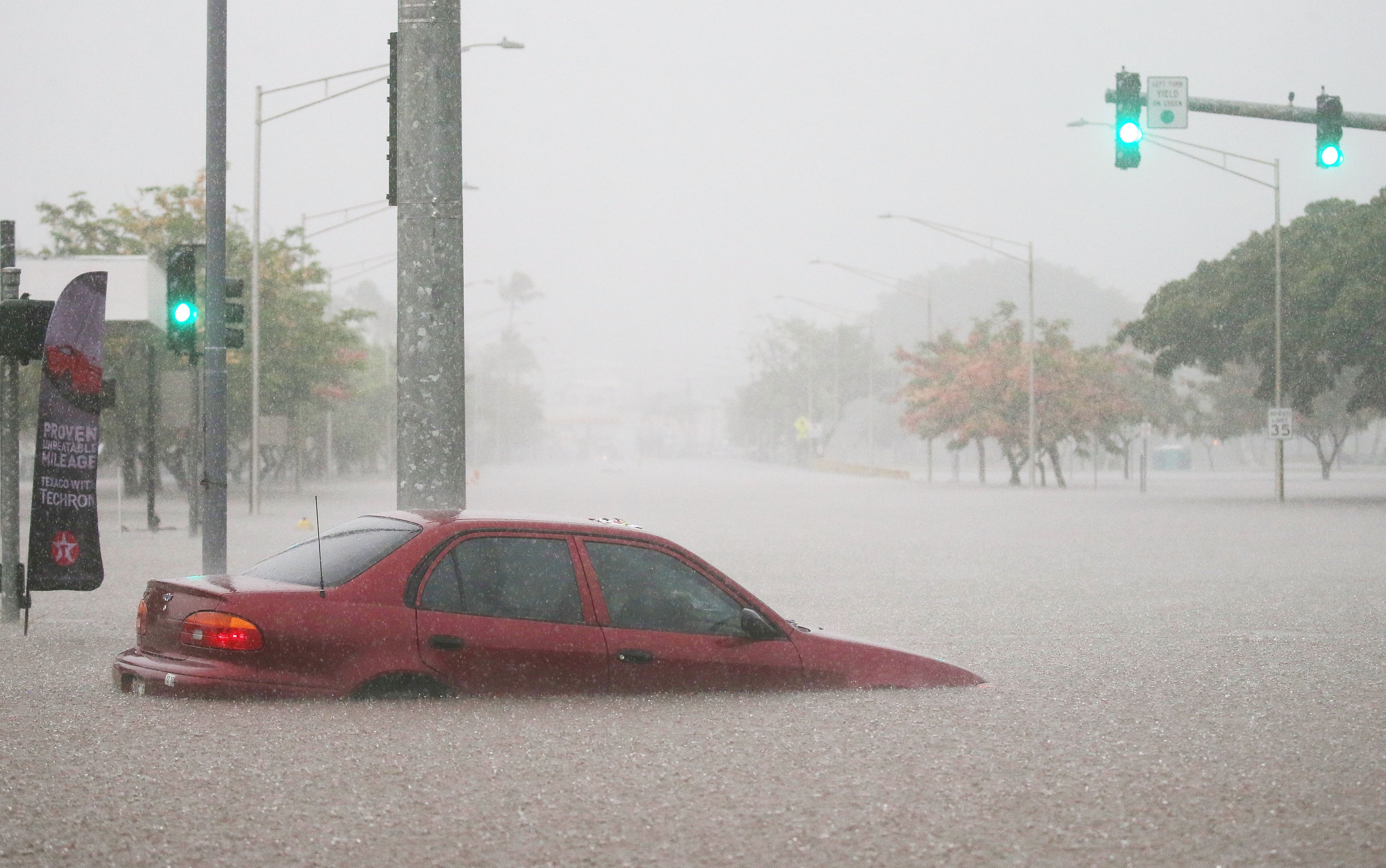 Hurricane Lane Causing Catastrophic Flooding in Parts of Hawaii
This post contains references to products from one or more of our advertisers. We may receive compensation when you click on links to those products. Terms apply to the offers listed on this page. For an explanation of our Advertising Policy, visit this page.

While Hurricane Lane has been downgraded to a tropical storm, the Hawaiian Islands aren't out of the danger zone yet. The major concern: rain.

As with Hurricane Harvey, the expected rainfall totals have increased with each update of Hurricane Lane — from "isolated maximum amounts of 20 inches" on Tuesday to "excessive rainfall up to 30 inches" on Thursday. But these predictions were still far too low. As of 5am Eastern Saturday morning, parts of the Big Island have received almost 45 inches of rain from the storm:

Videos from the Big Island show the effects of the rainfall, which has created torrential rivers and localized flooding:

On the east coast of the Big Island, downtown Hilo had already experienced significant flooding by Thursday, with plenty more rain funneling down the island's mountains toward the coastal city:

But water isn't the only threat faced by the islands. Brush fires have ignited on Maui and spread quickly by the storm's winds, destroying homes and forcing evacuations.

While Hurricane Lane was once a Category 5 hurricane packing 160mph winds, the hurricane's core wind field has remained entirely offshore. As we've reported, this was predicted by the Central Pacific Hurricane Center — with hurricane wind probabilities never higher than 16% for any part of the islands.

Although the strongest winds never impacted the island, the land interaction has decimated the storm. This satellite image shows how Lane dropped from a Category 3 hurricane to a tropical storm in just eight hours:

Flight Disruptions: Due to only mild winds, airlines are continuing to operate flights to and from Hawaii with minimal disruption. As of the latest update from Hawaii's Department of Transportation, all 15 airports located in Hawaii "and their associated runways continues to remain open and accessible."

On Friday, Honolulu airport (HNL) experienced 22 cancellations and 34 delays, meaning more than 90% of flights operated on time. Kahului, Maui (OGG) was harder hit with 34 cancellations and 10 delays, but still operated 84% of scheduled flights on time.

American Airlines reports that it cancelled four out-and-back flights to Kahului, Maui on Friday. The world's largest airline expects to operate all 23 flights to/from Hawaii on Saturday. Shortly before 10am Saturday, AA retracted its weather waiver which previously was available for flights through August 26.

Animals on flights to Hawaii: There's one quirk from the storm that'll still impact some travelers: the State of Hawaii's Department of Agriculture is facing a staffing issue that's affecting its ability to process animals on arrival into Hawaii.

Now through Monday at 8am, the quarantine office has notified all airlines that "emotional support animals will not be accepted on flights into Hawaii." Service animals will continue to be allowed, but passengers with service animals should arrive at the airport early, as airlines are "required to contact the quarantine office during check-in at the airport to ensure that the service animal has been pre-cleared for release upon arrival in Hawaii."