How the President, Cabinet Officials, Congress and First Family Fly 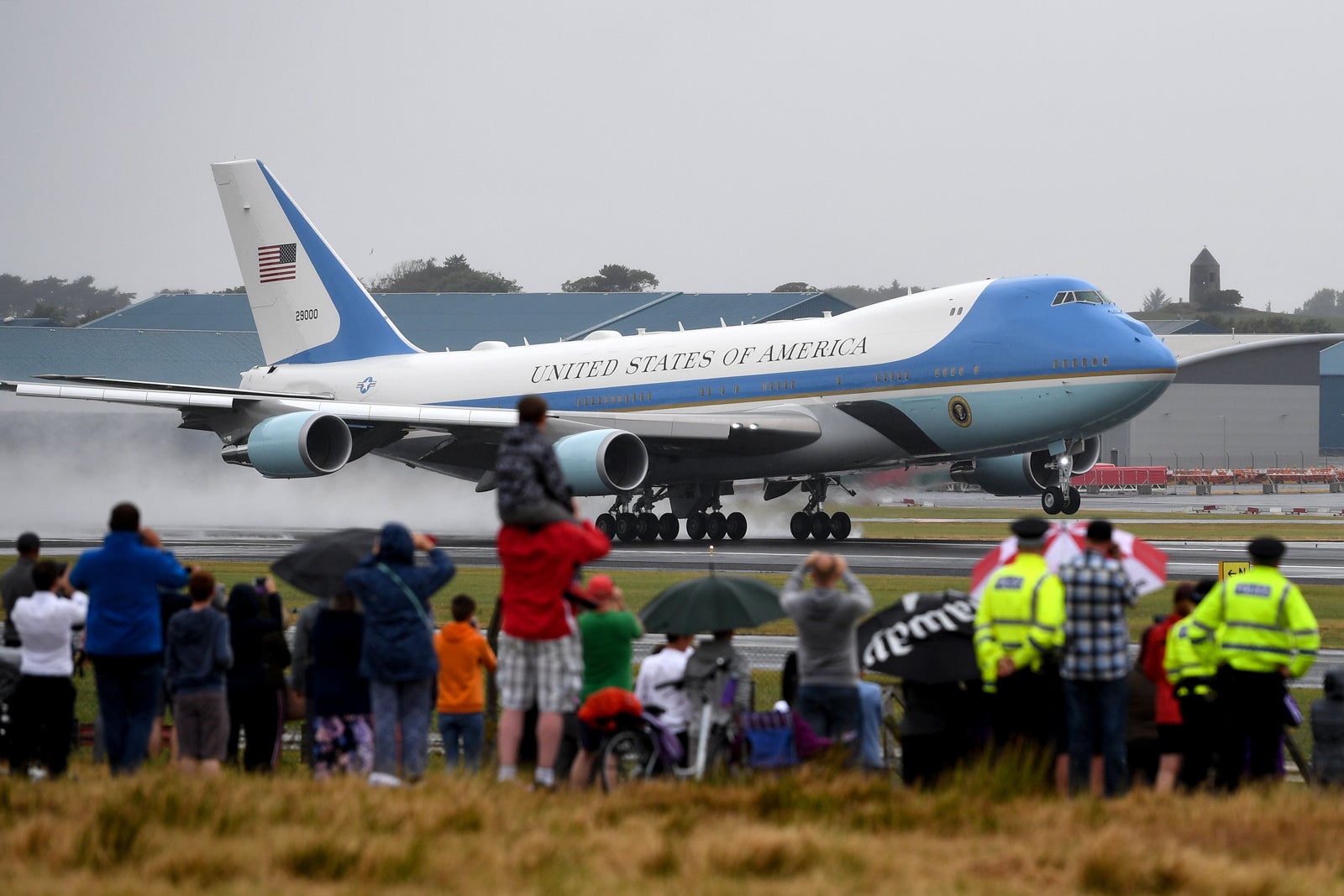 Government bureaucrats traveling on official US business have a strict but somewhat arcane set of rules for how and what they're allowed to fly. But is it any different at the top of the heap? Here's how the top officials of the executive and legislative branches of the federal government fly — or at least how they're supposed to.

During the 2016 campaign, candidate Donald Trump railed against President Obama's use of Air Force One as a waste of taxpayers' money. As president, Trump revels in breaking rules and upending political norms, and his travel on Air Force One is no exception. Former presidents have often called travel on a luxurious fleet of aircraft one of the great perks of the presidency.

Brendan Doherty, a professor of political science at the US Naval Academy, said that Trump’s use of Air Force One differs from his predecessors not in the frequency of use, but in the kinds of trips he takes. (Air Force One is the radio call signal traditionally given to either of the two highly customized Boeing 747-200B aircraft carrying the president, or to any other airplane with the commander in chief on it.)

“Trump does not travel for speeches as much as his predecessors but frequently uses it to fly to his own property in Palm Beach,” Doherty said. “Another difference is flying to these Make America Great Again rallies so early in the campaign. These are explicitly electoral events.”

He asserted past presidents traveled for campaign rallies only during traditional election cycles, but that Trump has never stopped campaigning. Doherty also said that, though presidents Ronald Reagan and George W. Bush used Air Force One to travel to their respective ranches, they weren’t flying as frequently as Trump does to his other properties.

Calculating taxpayer cost for the use of Air Force One is hardly an exact science. In 2017, the United States Air Force estimated Air Force One that year cost $142,380 an hour to operate, compared to $180,118 the previous year.

“Airfare and related travel expenses associated with the trips taken by the president, vice president, and first lady are only a fraction of the total cost of such trips," a report issued by the Congressional Research Service in 2012 said. “Most of the costs involve operational costs of the aircraft, and include fuel, maintenance, engineering support and per diem expenses for the crew.”

Doherty said it gets tricky estimating taxpayer costs when a trip combines travel for political or unofficial purposes and official purposes, such as speeches or meetings with business and political leaders. International travel is always considered official business.

“When a trip is for political or unofficial purposes, those involved must pay for their own food and lodging and other related expenses, and they must also reimburse the government with the equivalent of the airfare that they would have paid had they used a commercial airline,” according to the same CRS report.

So if Trump is holding a MAGA rally and then goes to meet with the governor of that state (both official and political activities), a “formula determines the amount to be reimbursed for the part of the trip involving political activities,” according to the CRS.

But Doherty said that formula has not been made publicly available, making it impossible to determine true taxpayer costs. Doherty also pointed out that there are also additional costs to the cities and towns that host one of the president’s rallies. A 2017 Trump rally in Phoenix, for example, cost the city $450,000.

US News & World Report writer Kenneth Walsh has been quoted as saying that the difference between Air Force One and Air Force Two “is like a first-class hotel suite versus sort of a discount hotel room.”

The vice president’s aircraft costs only a fraction of what Air Force One costs. The Air Force estimates that expenses for Air Force Two run $30,000 an hour.

On Sept. 29, 2017, Mick Mulvaney, then the director of the Office of Management and Budget, issued a memo with a clear message intended for the heads of executive departments and agencies: “Government-owned, rented, leased or chartered aircraft should not be used for travel by government employees, except with specific justification …. Accordingly, with few exceptions, the commercial air system used by millions of Americans every day is appropriate, even for very senior officials.”

The memo was issued 12 days after the resignation of Health and Human Services Secretary Tom Price and was a public attempt to condemn what had been happening since Trump took office: Cabinet secretaries were wasting taxpayers' money on air travel.

In 2018, investigators found that Price had improperly spent $341,000 by billing taxpayers for use of chartered jets and military aircraft on trips to Florida, China, Texas, Germany, Japan, Liberia, Switzerland and Vietnam. The secretary was using planes intended for the president and vice president, and 19 of his 20 flights didn’t meet federal requirements.

But the Mulvaney memo didn’t do much to curb the wanderlust and spending habits of Treasury Secretary Steven Mnuchin, Interior Secretary Ryan Zinke, EPA Director Scott Pruitt and Veterans Affairs Secretary David Shulkin. (Mnuchin is still in office; the latter three are not.)

Documents from 2018 showed that Mnuchin cost taxpayers $1 million for trips made on military aircraft.

The Department of the Interior's office of the Solicitor’s Division of General Law determined that Zinke was allowed to violate department policy so that he could take his wife, Lola, and other individuals on flights intended for official government business. Zinke later reimbursed the government for his wife’s $15,000 trip.

During his first year in office, Pruitt cost taxpayers more than $163,000 in flights.

An inspector general’s report in 2018 found that Shulkin’s 2017 trips to London and Copenhagen involved “personal time for sightseeing and other unofficial activities.” His travel entourage included his wife, VA staffers and a security detail. His nine-day trip cost at least $122,000, with only three days devoted to official business.

Dianne Feinstein, one of the nation’s wealthiest senators, often flies on her husband’s private jet from Washington to California, and has reportedly offered rides on the jet to other Western senators. For less affluent members of the House and Senate, such luxury air travel on government business isn’t supposed to be an option under most circumstances.

According to the House Committee on Ethics, “as a general rule, travel, the primary purpose of which is to conduct official business, must be paid for or authorized by the House. Put another way, members and staff may not accept expenses or in-kind support from a private source for such travel.” For trips that combine the official and the political or the official and the personal, (called a “mixed-purpose trip”) members must determine the trip's primary purpose. If the primary purpose is considered official business, then the tab is picked up by the federal government. If it’s personal, the member is responsible for payment, and political campaigning or activity is paid for by the political or campaign committee.

Travel expenses for House members are taken from the Members' Representational Allowance, which for fiscal year 2019 is set at $573.6 million. The CRS calls the MRA “one consolidated allowance” with which congressmen are able to operate their offices. About 4% of the MRA fund was spent on official travel by all of the congressional offices. In 2016, congressional, taxpayer-funded international travel had soared to $19.4 million, the costliest figure of the 21st century.

More than a decade ago, a pervasive rumor in Washington was that House Speaker Nancy Pelosi was spending extravagantly on a 200-seat personal jet that cost taxpayers $60,000 per flight. The reality was that Pelosi was using a government Air Force jet (Nicknamed the "Speaker Shuttle") with only 12 seats. During her first term as speaker, military documents estimated that a one-way flight the shuttle between the nation’s capital and her home district in California averaged taxpayers $28,210.

When Pelosi regained the Speaker’s gavel in January, her deputy chief of staff issued a statement that the California Democrat “intends to travel commercially.” During the government shutdown, the president had denied Pelosi and several Democratic colleagues the use of military aircraft on a fact-finding mission to Afghanistan.

While Pelosi was thwarted from taking a chartered flight overseas during the government shutdown, there was no such prohibition on the first lady’s travel. That same day, Melania Trump was on a $35,000 military flight to Palm Beach, Florida, on her way to Mar-a-Lago. Like the vice president and several cabinet secretaries, the first lady has access to C-32 government aircraft when she travels domestically and internationally.

According to the new book "Kushner, Inc." by Vicki Ward, Ivanka Trump frequently asked to travel on Air Force planes when it wasn’t always necessary, but then-Secretary of State Rex Tillerson repeatedly rejected her requests. According to Ward, Ivanka and husband Jared Kushner invited cabinet secretaries like Steve Mnuchin as a way of getting around the prohibition on using government jets. Through his attorney, Kushner has denied the accusations.

Still, Ivanka and Kushner did join the president on Air Force One on nine-day trip to Saudi Arabia and Israel in 2017.