How JFK Invented Air Force One As We Know It Today 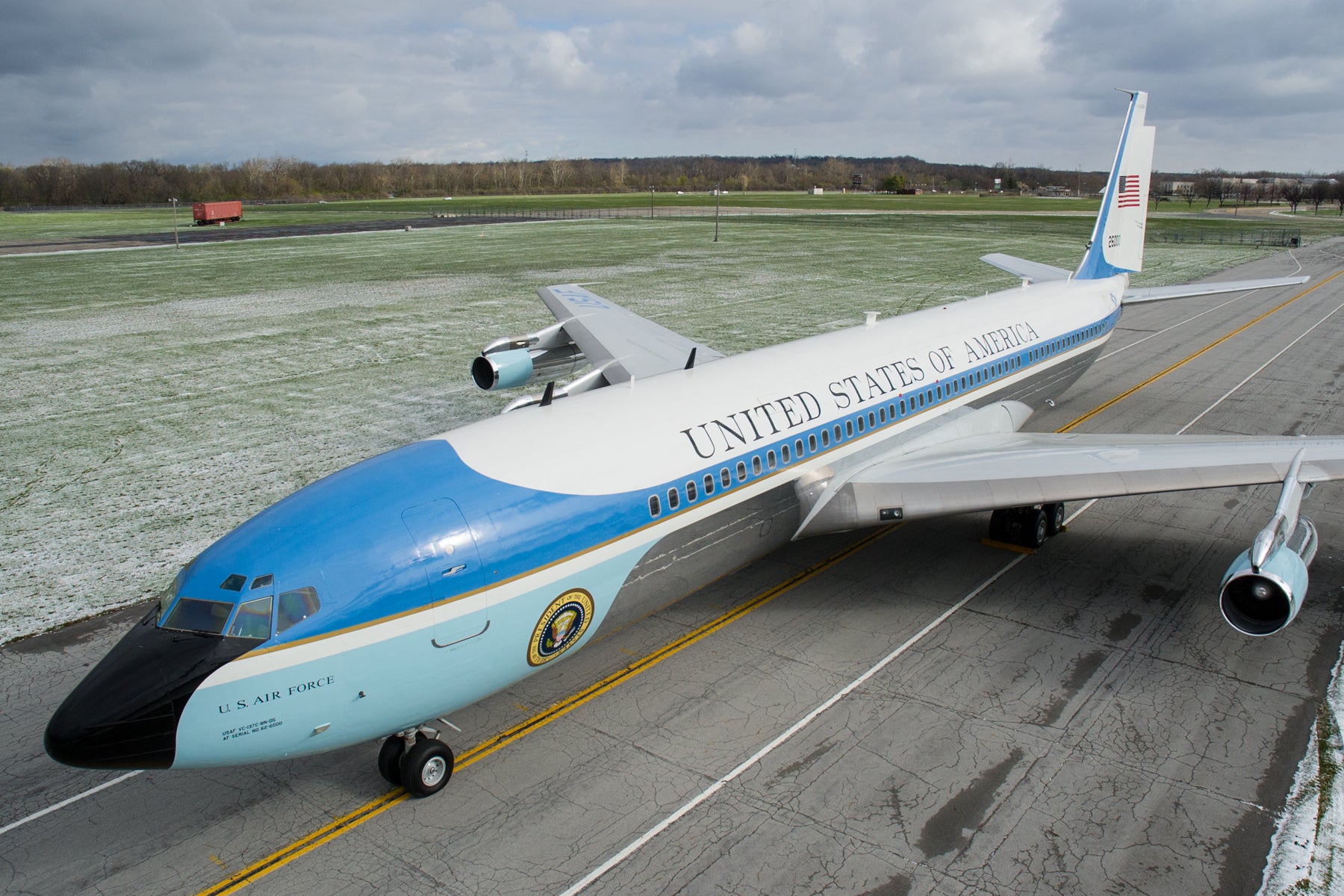 How JFK Invented Air Force One As We Know It Today
This post contains references to products from one or more of our advertisers. We may receive compensation when you click on links to those products. Terms apply to the offers listed on this page. For an explanation of our Advertising Policy, visit this page.

With a new Air Force One coming soon to take the place of the current 30-year old jets, there's a dispute brewing between Congress and the White House on what the new planes should look like. President Donald Trump wants to change the current blue-and-white livery to something bolder in red, white and blue. But Congress isn't going with that plan.

Trade publication Defense One reported that the Seapower and Projection Forces Subcommittee of the House Armed Services Committee has drafted legislation requiring the new plane's livery to “comply with the criteria set forth in a report of the Boeing Company titled ‘‘Phase II Aircraft Livery and Paint Study Final Report’.” Boeing wouldn't say what that report prescribes. But the bottom line is that the new Air Force One paint job won't be decided by the White House, if the legislation passes.

The current Air Force Ones are a pair of 1980s-vintage Boeing 747s built for the military with the designation VC-25A. In 2012, they will be phased out in favor of two late-model commercial 747s, currently being converted to VC-25Bs and chock-full of advanced systems not found on civilian jets. The Air Force picked them up cheap from Boeing when the original customer, Russian airline Transaero, went bust before taking delivery.

Whichever colors they end up wearing, it's worth remembering that the current Air Force One colors are one of the legacies of President John F. Kennedy.

Though the impact of his short tenure in the White House will be debated till the end of the republic, there's no question about one aspect of his years at the helm : he left us with the Air Force One we know it today.

And the Boeing VC-137C designated SAM 26000 — the one that took JFK to Dallas in 1963 and carried his body out of Dallas three hours and three minutes later — is arguably the most iconic single aircraft in history. As the Pentagon gets ready to replace its current set of Air Force One jets with two Boeing 747s bought almost-new from Boeing, we can look back at how JFK revolutionized presidential airplane travel at the dawn of the jet age.

Those were also the first presidential jets, officially named Special Air Mission (SAM) 970, 971 and 972. They weren't pretty: Workers splashed safety-orange paint on the nose and tail, along with the words "Military Air Transport Service" in block letters on the body, as if the leader of the free world were no more than a load of government-issue cargo.

When she became first lady, the brand-conscious Jacqueline Kennedy had those words replaced with "United States of America," and when a highly customized long-range VC-137C (another 707 variant, with longer range than the B model) rolled out of the plant in Renton, Wash., in 1962, a year into the Kennedy administration, she and the president saw an opportunity to turn the heretofore lackluster presidential plane into a symbol of American power and reach. They tapped hugely influential industrial designer Raymond Loewy (who claimed credit for the design of Lucky Strikes, the Lincoln Continental and, more controversially, the Coca-Cola bottle) to reinvent Air Force One.

(Air Force One is the official designation of any US Air Force aircraft carrying the president at the moment, and each plane reverts to its non-presidential code when he's not on board. Today's presidential planes, for example, are two Boeing 747-200B aircraft with the Air Force code VC-25A, which go by the call signs SAM 28000 and 29000 when not in presidential use.)

Loewy softened the look of the presidential plane and made it look far less military or industrial. He also came up with new livery, stamping the presidential seal on the fuselage, putting the Stars and Stripes on the tail, and choosing a daring overall paint scheme of red and gold. President Kennedy loved it, except for one detail: He wanted the colors to be blue and silver instead of red and gold. (Depending on the source, it was because blue was his favorite color, or because he thought red and gold smacked of something more appropriate to a monarchy.) It's the same design that Air Force One uses today.

That's the way SAM 26000 (always pronounced "two-six-thousand") looked when he flew it to West Berlin and gave his famous "Ich bin ein Berliner" speech, and when he took it from Fort Worth's Carswell Air Force Base to Dallas Love Field (DAL), where he landed on Nov. 22, 1963. Vice President Lyndon B. Johnson was sworn in on the VC-137C that afternoon as a shocked, grieving Jackie Kennedy looked on. Air Force One took the dead president, his widow and the new president to Washington, DC, and was part of the honor flight overhead as JFK was laid to rest at Arlington National Cemetery three days later.

LBJ turned Air Force One into a second home, barreling around the world while engaging in his famously blustery form of Texas-style diplomacy. When Richard Nixon made his historic visit to China in February 1972, it was the SAM 26000 that took him there. Later that year, it became the backup Air Force One when a newer VC-137 came into presidential service, but it continued to be critical to events in world history, including ferrying Queen Elizabeth II during her visit to the States in 1983.

SAM 26000 was finally retired in 1998, during the Clinton administration, with Vice President Al Gore as its last high-ranking passenger. It had transported eight US presidents and logged more than 13,000 flight hours and millions of miles. Now it calls the National Museum of the United States Air Force, at Wright-Patterson AFB near Dayton, Ohio, home.

A version of this story has been previously published on October 21, 2017. This version has been updated from the original.