Would you fly Frontier to Europe? CEO Barry Biffle is working on that

Articles
David Slotnick is a senior aviation business reporter at TPG. He covers anything and everything to do with the business of running an airline.
Follow
Oct. 31, 2022
•
7 min read 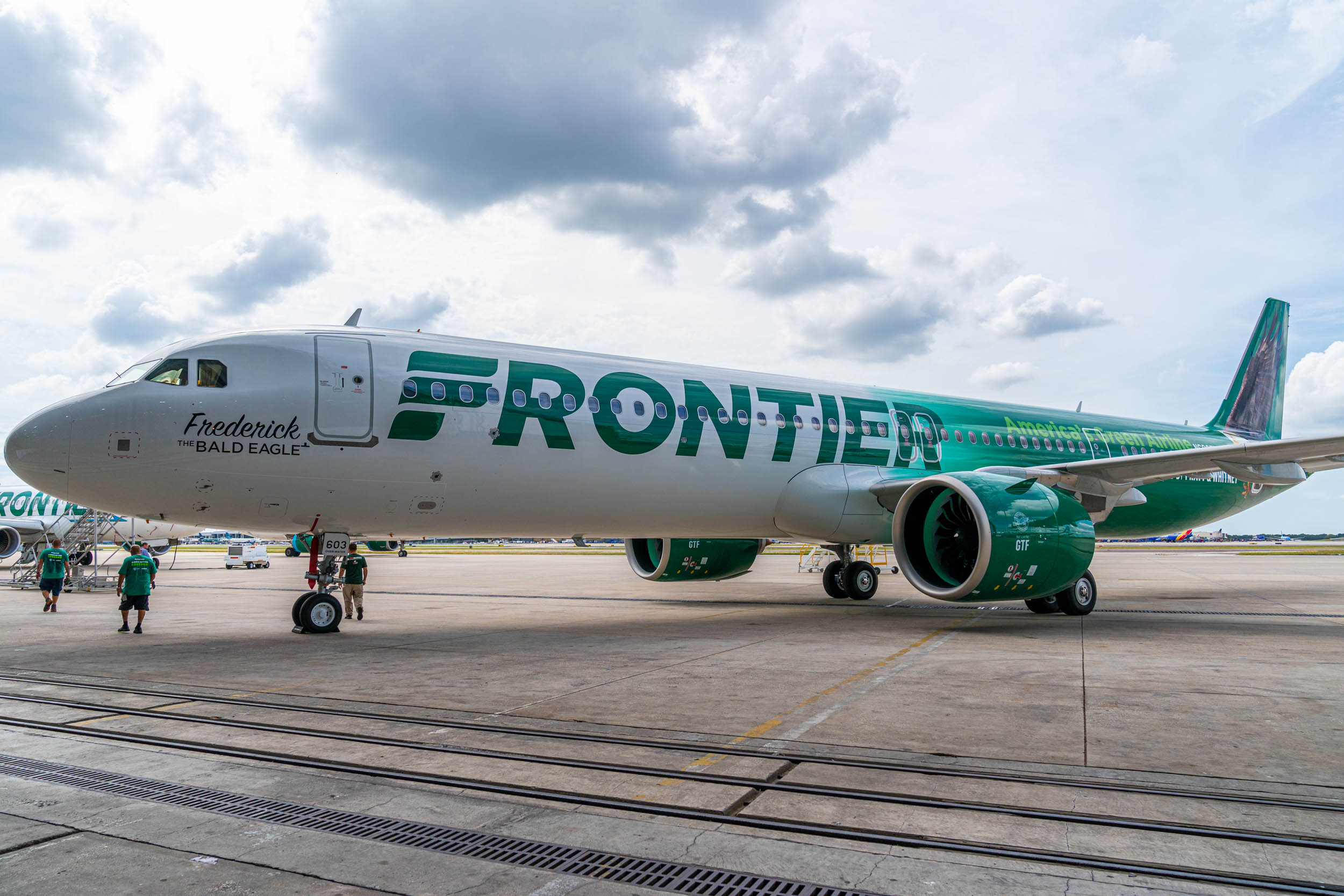 Would you fly Frontier to Europe? CEO Barry Biffle is working on that
This post contains references to products from one or more of our advertisers. We may receive compensation when you click on links to those products. Terms apply to the offers listed on this page. For an explanation of our Advertising Policy, visit this page.

With its biggest competitor — Spirit — just approving a groundbreaking acquisition by JetBlue, Frontier is facing a possible new operating environment in which it's the biggest ULCC in the United States.

"That will make us the primary nationwide ULCC," Biffle told TPG during a recent interview in Tampa, where the airline was unveiling its first Airbus A321neo, configured to seat 240 passengers. "95% of the capacity in the United States will be 30% to 80% higher cost than us. So we kind of have no natural competitor at that point."

It's a good time to be Biffle, despite the recent collapse of his airline's deal to acquire Spirit, which was derailed by JetBlue's unsolicited offer.

Travel demand is high despite fears of a recession looming in the larger economy, and the JetBlue merger would knock Spirit out of Frontier's way, leaving the Denver-based ULCC free to focus on competing with the larger legacy airlines and, of course, the enlarged JetBlue.

While the merger still needs to be approved by regulators — which is far from a given — it makes sense for Biffle, Frontier, and the airline's parent company Indigo Partners, to think long-term expansion.

Frontier alone has 226 aircraft on order scheduled to be delivered through the end of the decade, while Indigo-owned airlines had a total of 743 outstanding orders from Airbus as of the end of September, according to Airbus data.

It's been difficult for airlines to grow substantially since the pandemic, partly because of disrupted supply chains meaning that planemakers can't make new aircraft fast enough to meet the demand.

That's actually what led to the bidding war over Spirit Airlines — both Frontier and JetBlue argued that by acquiring Spirit, they could effectively supercharge their growth plans.

For Frontier, the 226 new aircraft — some of which will replace older ones — offers one avenue for expansion. In theory, Indigo can also reallocate orders meant for its other carriers if it sees a better opportunity from giving those planes to Frontier.

"We're growing as fast as we can," Biffle said, dismissing the possibility of current plans to acquire a different airline now that the Spirit deal is out of reach.

"There may be other M&A (merger and acquisition) targets at some point, but right now, organically we're going to double our size inside of four years, and we'll triple our size by the end of the decade."

"We have no plans right now," he added.

But while Frontier's aircraft order book may speak to its overall growth ambitions and sustainability goals — Airbus says its the "neo" planes are roughly 20% more efficient than previous generation narrowbodies — 18 of those ordered planes stand out.

The XLR offers a higher maximum take-off weight than the neo, meaning it can take-off with more fuel, which enables a greater range. Airbus lists the XLR's range at 4,700 nautical miles (about 5,400 miles), compared to the regular A321neo's 3,500 nautical mile range (just over 4,000 miles), although notably the aircraft has not been certified yet, so the exact approved range remains uncertain. With the same size airframe, Frontier could seat 240 passengers in the same tight configuration it has on the newly delivered A321neo.

According to Biffle, the XLR will help the airline expand beyond the continental United States, and even North America.

"Europe, Hawaii and South America," Biffle answered when asked about the airline's plans for the XLR. "We're evaluating [them]."

Notably, Indigo owns airlines in Europe — Wizz Air — and South America — JetSMART — that could, in theory, interline or codeshare with Frontier to offer an even bigger low-cost network, although Biffle did not indicate whether such a plan was in the works.

While Frontier offers point-to-point service across the U.S., European routes would be focused from the Northeast.

"Prety much anywhere in the northeast United States could go to Europe," Biffle said.

"We're in Boston," he added, "we're in Philadelphia, we're in Islip in New York."

Notably, the aircraft's range would likely fall well under the certified maximum if Frontier fills it with 240 seats. The airline would also need to figure out a way to allow for a lie-flat crew rest area for pilots on longer flights.

Still, even in a high-capacity setup, the XLR's range should cover much of Europe from the Northeast. On paper, the XLR could even make it to London, Paris or other destinations Western European cities from further south or west in the U.S., such as Florida, St. Louis, or Kansas City.

Biffle did not say what destinations the airline was exploring, and such practical considerations would come closer to the plane's delivery. Still, he did mention one possibility.

"All of Ireland," he said, noting that several Irish airports offer U.S. customs pre-clearance before boarding flights to the U.S., meaning that Frontier could operate to smaller airports — such as Islip — that do not have passport control or customs facilities.

In the Shorter term, trying what works

In the more immediate future, however, Biffle plans to have Frontier keep doing what it knows best: adding service to high-demand places.

"We're going to continue to grow where the nation goes to vacation," Biffle said. "Our three biggest airports are Vegas, Orlando, and Denver. There's a huge opportunity to grow in Vegas."

Despite its expansion plans, Frontier has become notorious for starting new routes only to abruptly pull them, sometimes pulling out of markets entirely. For instance, the airline canceled its year-old service from New Castle Airport (ILG) near Wilmington, Delaware, to Orlando (MCO), leaving Deleware the only state without any commercial air service.

While other airlines may give a route some time to mature, Frontier prefers to cut losses quickly and redeploy its capacity somewhere more profitable.

"The best trait for a network planner is not identifying a good route — it's spotting a loser and killing it," Biffle said. "You can lose a lot of money justifying that it's 'strategic,' or all these reasons you should fly something."

"People that give [routes] two or three years, that's called hope marketing. 'I hope it's going to work out," he added. "If we're not making money within a year, we're gone."

Even with that said, Biffle pushed back on the airline being characterized as being impatient or having too little fidelity to the markets it enters.

"Everybody focuses on that we cancel a lot of routes, but we actually start a lot of routes," he said. "If you measure over a multi-year period, our hit rate is actually one of the best in the industry."

With the roadmap to triple in size by 2030, one thing is clear: Frontier's route map is poised to grow, and by a lot.

Featured image by DAVID SLOTNICK/THE POINTS GUY
Editorial disclaimer: Opinions expressed here are the author’s alone, not those of any bank, credit card issuer, airline or hotel chain, and have not been reviewed, approved or otherwise endorsed by any of these entities.