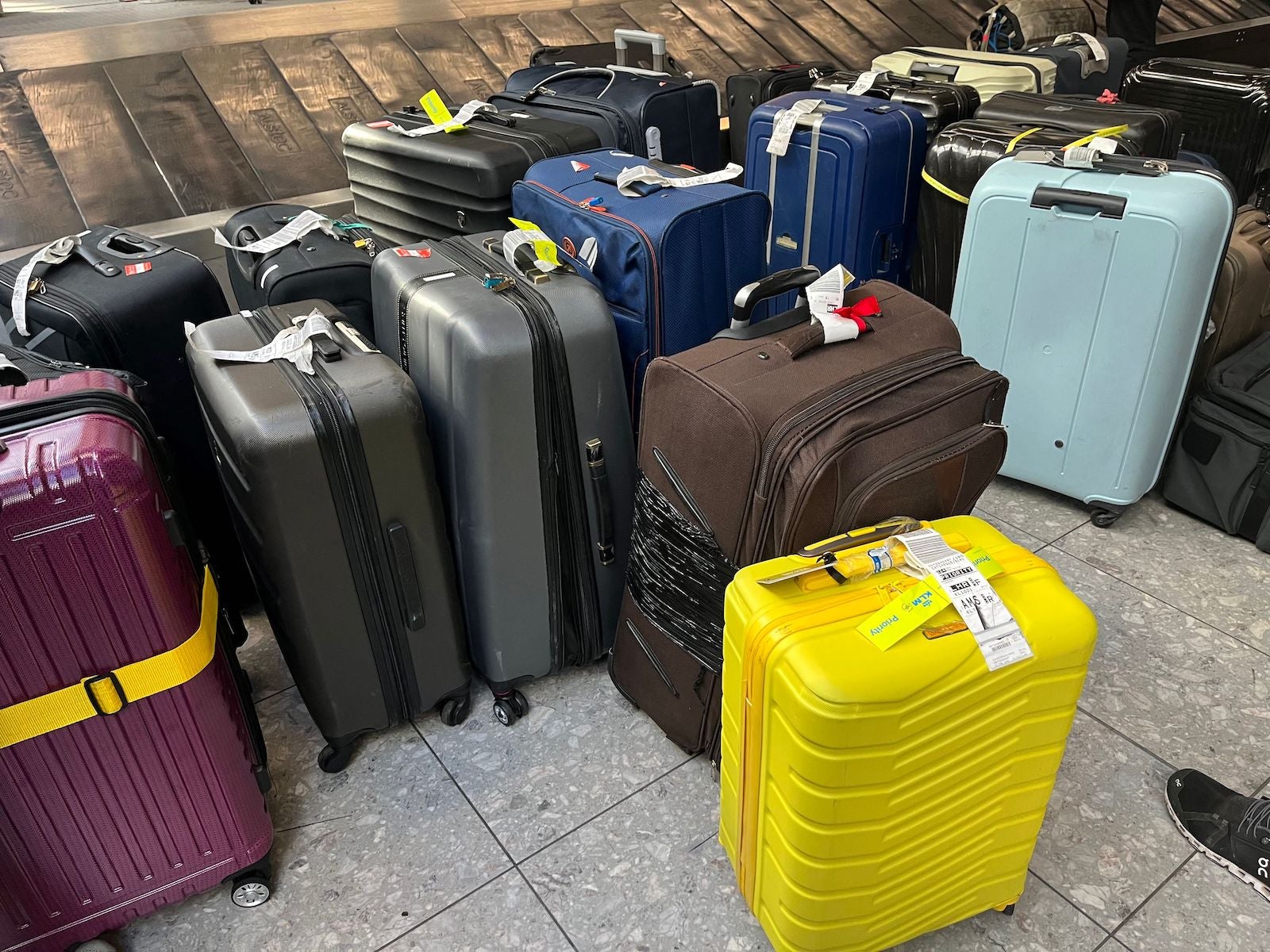 It had been weeks since Cameron Hopkins and his girlfriend had arrived back home in the U.S. after their June excursion to Europe — and there was still no sign their lost bags would ever show up.

Infuriatingly, Hopkins could see their exact location with the help of the Apple AirTags he had placed on the suitcases. However, the bags still were sitting, unmoved, somewhere at the Dusseldorf Airport (DUS) in Germany.

The luggage held items rich in sentimental value from his family’s trip through Athens; the Greek islands; Venice, Italy; and Poland. And finally, Hopkins had enough.

He was going back.

On July 3, he boarded a flight back to Europe to kick off what would be a 96-hour journey that would include canceled planes, trains and rifling through rooms full of smelly luggage.

A memorable trip that was anything but smooth

Throughout their trip, Hopkins said snafus were a recurring theme for him and his family.

“Memories were made,” he said — but with plenty of hiccups along the way.

The baggage fiasco began, Hopkins said, when Lufthansa canceled their flight from Venice to Poland. Needing to make it to a family gathering, he paid $900 to re-book them all aboard European low-cost carrier Eurowings.

The trip involved a stop — but no plane change — in Dusseldorf. Despite that, it appears — no, it’s quite clear, actually — that the family’s bags were removed from the plane in Dusseldorf, which Hopkins and some of his fellow travelers realized after arriving in Krakow.

“We get there, and half the people on the plane get their luggage — and half don’t,” he said.

As he filed a claim, Hopkins showed baggage officials his Apple AirTag app which, via Bluetooth tracking of the devices he had placed in each suitcase, indicated the luggage was still in Dusseldorf.

Like another TPG reader found during his travels to Europe this summer, though, locating the bags and getting your hands on them are two entirely different things.

Related: What to do when an airline loses your luggage

The family had to purchase clothes and other essential items to get through the rest of their trip.

As we already know, there was no solution during their time in Europe. Hopkins said calls to airline customer service delivered no bags or satisfaction.

“It’s pretty much just screaming into the abyss,” he said.

It was more of the same even after arriving back home in the U.S.

Continuing to see his bags sitting in the Dusseldorf Airport via his AirTags, Hopkins said he finally decided, “Let’s do this.”

Five days after arriving at his home airport, Las Vegas Harry Reid International (LAS), Hopkins hopped back on a Condor flight headed to Dusseldorf via Frankfurt. Of course, it wouldn’t be summer 2022 travel without disruption: The second leg of the trip got canceled.

“Fine,” he thought. He bought a ticket on the Deutsche Bahn and rode to Dusseldorf by rail.

At the airport in Dusseldorf, attendants directed him to remote rooms – some located in the airport’s parking structure – where he had to sift through seemingly endless collections of luggage.

“Baggage smells horrible,” he informed me.

Finally, one by one, he tracked down the family’s four suitcases. Of course, you can’t carry four bags onto the plane home, though.

So, of course, a few of the bags got lost again as he flew back to Poland to drop some of the bags off with his girlfriend’s parents, who live in Europe. Fortunately, this time the luggage made it onto a subsequent flight, and Hopkins’ own trip home to the U.S. was otherwise “uneventful.”

Thanks to his whirlwind second trip to Europe, everyone in the family finally got their suitcases — making them some of the lucky ones.

Related: How to use Apple AirTags to track your bags

It’s not the clothes that matter, said Matt Rigney, another person with a lost luggage saga. It’s that the one bag lost contained all his kids’ souvenirs from their once-in-a-lifetime trip through Europe.

They flew home to Huntsville, Alabama, on a combination of Star Alliance partners SAS and United Airlines from Stockholm via Amsterdam and Washington's Dulles International Airport (IAD). Rigney said it became clear a bag was missing as they cleared customs during their connection in the U.S.

“The fourth [bag] was nowhere to be found,” he said.

Speaking with United Airlines officials, Rigney said, it now appears SAS only routed the bags to Amsterdam – which is where he believes the suitcase remains. United told him it has contacted SAS to have the bags routed to Alabama, but after weeks there are still no signs of progress.

“Getting in touch with SAS right now is not particularly easy,” he said. “I’m only willing to hold for so long on an international call to Amsterdam.”

Resigned to the fact the bag — and with it, his children’s carefully-selected keepsakes from their time three-week adventure through Switzerland, Italy and Stockholm — likely won’t make it home via the airlines, Rigney has just one strategy left at this point.

“I’ll be back in Europe for work in November,” he joked. “Maybe [the bag] will still be sitting in the airport then.”

Hopkins and Rigney are far from the only travelers affected by luggage issues in Europe this summer.

Scenes of bags piled up in mountain-like assortments and suitcases as far as the eye can see in baggage claim areas have been commonplace this summer amid airline and airport staffing shortages, a problem likely compounded by mass flight disruptions.

The situation got so dire that Delta Air Lines actually used an otherwise empty jet in recent weeks to fly 1,000 bags from London's Heathrow Airport (LHR) back to the U.S.

As you plan your travel this summer to anywhere, but Europe in particular, you might want to consider whether you can get by without checking a bag.

On the rare occasion I check a bag, I’ll religiously check the airline’s app, which – when properly functioning – identifies when a bag is checked in, placed on a plane and removed. This gives you snapshot-type updates along the journey (but not real-time tracking).

As Hopkins saw, Apple AirTags and similar electronic devices that leverage Bluetooth technology to share an item’s location are greatly helpful in locating your bag. It won’t bring your bag back to you, but it can help you pinpoint its location as you figure out how to try and retrieve it.

You also might consider a travel credit card that offers protection for lost baggage and unexpected costs like a hotel stay when your flight gets canceled. Just be sure to book your trip with the card since, as one TPG reader learned the hard way, many cards only offer protection on trips you purchase with it.

A trip easily worth the memories

Home in the Southwest after his second round trip to Europe, Hopkins estimates the cost for his trouble came in at close to $3,000, not including billable hours missed from work during his journey to retrieve the lost luggage.

He’s steadfast in his feeling he made the right decision to crisscross the Atlantic a second time, though: He’s certain the bags would not be back in his possession otherwise.

“You’re taking power back,” he said. “At least you’re doing something.”

While so many travelers have faced inconveniences this summer during their trips, the problems come on the heels of two-plus years where such trips were hardly possible.

For that reason, Rigney has no regrets about taking his family to Europe this summer for what was an excursion years in the making.

“Losing the bag has been an unpleasant experience, but my kids still got a trip of a lifetime,” he said. “I think the memories outlast the souvenirs.”