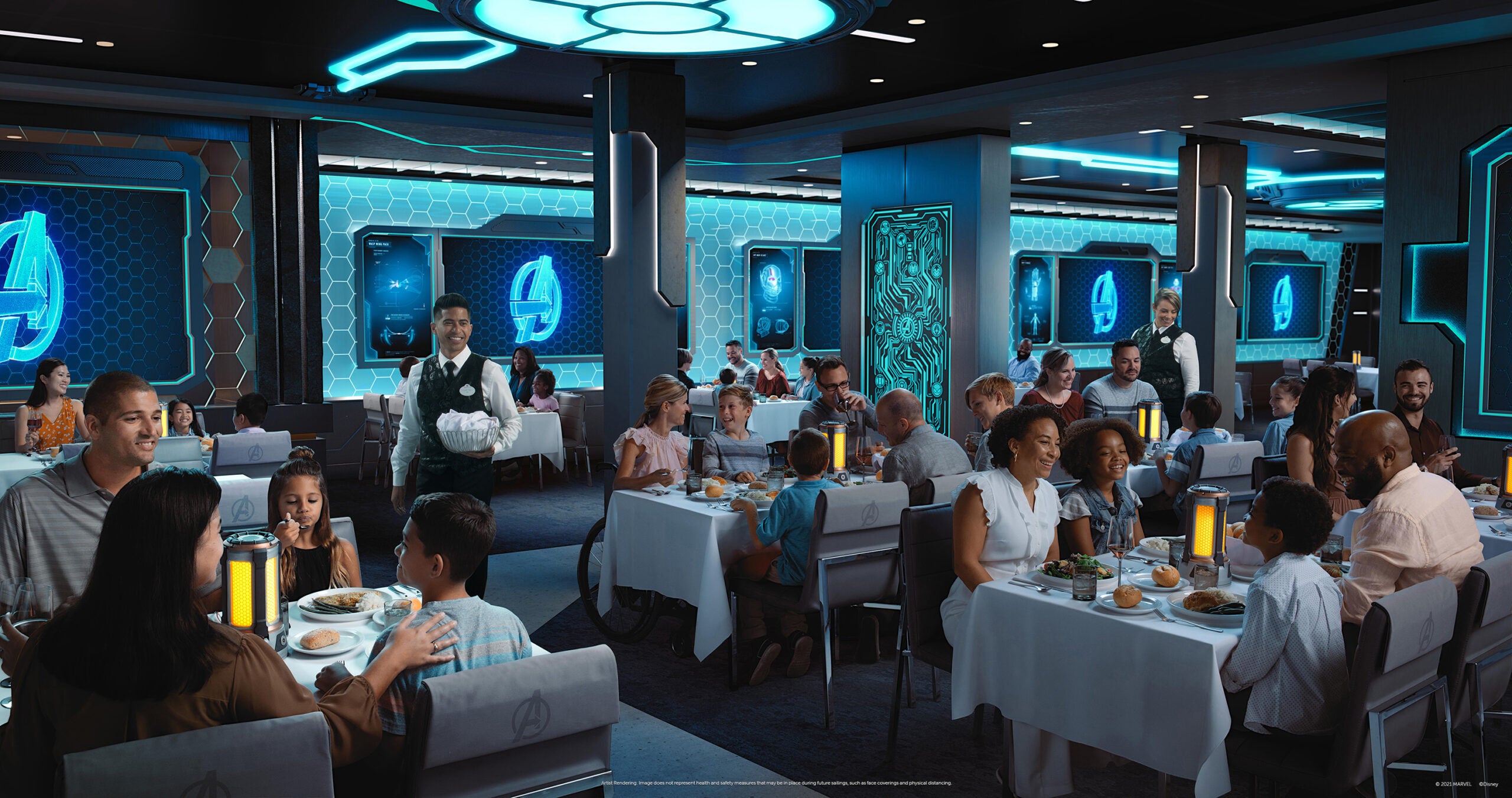 Disney Cruise Line has unveiled new details about the dining venues that'll be aboard its next new ship, Disney Wish.

The cruising arm of Disney on Thursday said the 2,500-passenger ship would be home to a new "cinematic dining adventure" called Avengers: Quantum Encounter, as well as two fast-casual restaurants. This is in addition to several previously announced eateries.

Here's all that we now know about dining on Disney Wish, which is scheduled to debut on June 9 -- almost exactly a year from today.

This will be an immersive dining experience at a previously announced Marvel-themed restaurant called Worlds of Marvel that Disney says is a first of its kind.

While dining in Worlds of Marvel, passengers will play an interactive role in an Avengers mission that features Ant-Man and The Wasp. According to Disney, the storyline will follow the two Marvel characters as they host a "special presentation of the most powerful Super Hero technologies, such as Captain America’s shield, Iron Man’s arc reactor and Ant-Man’s Pym Particles, giving guests an up-close look at holographic models, field reports and iconic scenes from Marvel movies displayed on the screens surrounding the room."

An unexpected villain will show up with an army ready to steal the technology on display, and guests will help save the day (and the meal) alongside Avengers such as Captain America and Captain Marvel.

Expect some fun special effects, such as shrinking luggage and pulsing lighting, and Marvel Easter eggs thrown in throughout the show.

As far as the menu goes, Disney is planning an array of Marvel-inspired dishes from locations visited throughout the movie franchise: Wakanda, Eastern European Sokovia and New York City. The official menus have yet to be announced.

Disney also announced new casual dining spots that will be available on the ship, starting with Marceline Market.

Named for Walt Disney’s early childhood hometown in Missouri, Marceline Market will be a food hall with ever-changing dishes inspired by marketplaces around the world. Passengers will be able to dine inside or outside with views of the ocean.

Marceline Market will feature 10 different food stalls and a central bar. Walking into the dining hall will feel like you've been transported to a bustling market from the Disney universe, with each stall manned by your favorite Disney characters from films such as “Tangled,” “Ratatouille,” “Alice in Wonderland,” “Zootopia” and more.

Menu-wise, there will be something for the whole family at Marceline Market — from American classics to international eats, comfort foods, vegetarian and plant-based fare, baked goods and (of course) desserts.

Breakfast and lunch will be served as a walk-around dining experience, and dinner will feature table service with entrées cooked to order.

Mickey and Friends Festival of Foods

The third addition to the dining lineup on the Disney Wish is Mickey and Friends Festival of Foods.

On the upper decks, Mickey and Friends Festival of Foods will serve as a place to grab quick eats while enjoying time on the boat. Fan-favorites such as Disney Cruise Line's signature soft-serve ice cream will be available, along with five Disney-themed stalls to choose from: Mickey’s Smokestack Barbecue, Donald’s Cantina, Daisy’s Pizza Pies, Goofy’s Grill and Sweet Minnie’s Ice Cream.

If you're a fan of the classic "Mickey Mouse" animated shorts, you'll likely recognize the seaside boardwalk design at Mickey and Friends. Families will enjoy the shaded seating areas where you can enjoy your meal.

1923: Inspired by the golden age of animation in Hollywood, this restaurant will offer a chance to get dressed up and experience an elegant dining experience.

Adults-only dining: Palo Steakhouse, Enchanté by Chef Arnaud Lallement and The Rose (an upscale suite inspired by “Beauty and the Beast") are exclusively for passengers 18 and older, and will offer a place to grab food and drinks when you want some time away from the kids.

The ship will also offer complimentary 24-hour room service, specialty treats and an assortment of gourmet cafes to chose from as well.

Disney Wish will have a diverse array of restaurants that are mostly new for the line. Like other Disney cruise ships, Disney Wish will operate with Disney's trademark rotational dining concept, where passengers rotate each night between three main restaurants (in the case of Disney Wish, the three will be Worlds of Marvel; Arendelle: A Frozen Dining Adventure; and 1923). As in the past, passengers will find that their servers move with them from restaurant to restaurant.

Disney Wish initially will sail out of Port Canaveral, Florida, on sailings that stop in Nassau, the Bahamas, and Disney’s private island, Castaway Cay.

Featured image by Photo courtesy of Disney Cruise Line
Editorial disclaimer: Opinions expressed here are the author’s alone, not those of any bank, credit card issuer, airline or hotel chain, and have not been reviewed, approved or otherwise endorsed by any of these entities.