Sky High: Dining at At.mosphere in the Burj Khalifa

Articles
Ethan Steinberg has been a frequent flier for as long as he can remember. He went from studying abroad in Paris to moving to Shanghai after graduating college, where he covered all things travel in the Asia-Pacific region for TPG.
March 30, 2019
•
10 min read 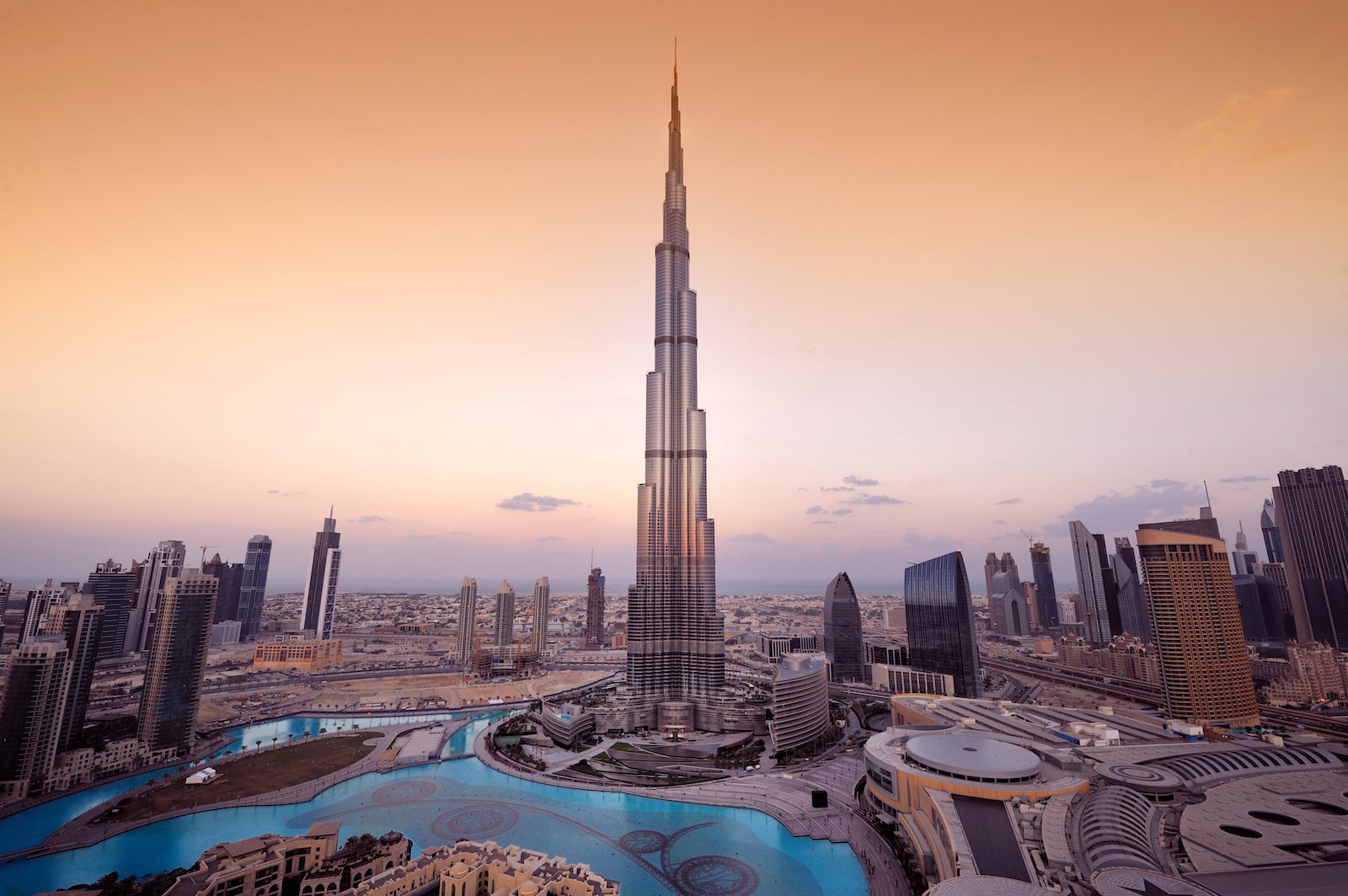 Dubai is known around the world for being ostentatious and over the top. For us AvGeeks, that manifests with Emirates' blinged-out gold cabins and onboard showers, but no matter how you choose to arrive in the United Arab Emirates, once you get here you'll have to come face-to-face with one of mankind's most impressive architectural feats. Standing 2,717 feet and 163 floors tall, the Burj Khalifa easily claims the title of world's tallest building (with almost 700 feet to spare over Shanghai Tower, the runner-up).

While you can buy a ticket for the observation deck at the top, there's another option for those looking for a more relaxed experience and a chance to soak in the views, not just snap a few pictures and be done. On a recent trip to Dubai, I got the chance to eat at At.mosphere on the 122nd floor of the Burj Khalifa. Here's what it was like eating at the highest restaurant in the world from ground level. (There's a restaurant in a Bolivian ski resort that's 17,519 feet above sea level that's technically the highest restaurant in the world, according to Guinness.)

I made a reservation directly on the At.mosphere website. Depending on what meal you planned to go for, and whether you wanted to sit at a window seat or not, there were different minimum spending requirements per person.

I think it goes without saying that if you're going to do this, you want to spend the extra amount and get a window seat. The views from tables away the windows really paled in comparison, as a meal here is as much about the views as the food.

I enlisted the help of the American Express concierge team to book high tea at At.mosphere. The concierge service is one of my favorite perks of The Platinum Card® from American Express, and also one of the most overlooked. You can reach the concierge by calling the number on the back of your card, chatting through the Amex app or website or emailing platinumrequests@concierge.americanexpress.com. I sent a quick email with my dates and preferred time, and had a reservation confirmation in under 10 hours. I also mentioned to Amex that my girlfriend and I were celebrating our five-year anniversary, which they passed on to the restaurant (though, as you'll see in a bit, something clearly got lost in translation).

My girlfriend and I spent the morning wandering around Dubai Mall with one goal in mind: Find and conquer the Emirates A380 flight simulator. At almost $90 for a 30-minute session, it was certainly an expensive way to pass the time, but I had a ton of fun.

The instructor took the seat next to me and we spent the first few minutes practicing takeoff from Dubai (DXB). Once I was familiar with the controls, he invited my girlfriend back to the co-pilot seat. She only crashed the plane once, but after that it was smooth sailing, and she even helped me pull off a rainy night landing at Hong Kong's now-defunct Kai Tak Airport.

From there it was time to head over to the Burj Khalifa. Make sure to read your confirmation email carefully: There's no direct access from the Dubai Mall or At the Top Burj Khalifa. We had to exit the mall and walk over to the Armani Hotel. It ended up taking us about 30 minutes in the afternoon sun to find the right exit from the mall and entrance to the hotel. It might be worth taking a car directly to the Armani Hotel and then walking over to the mall to save time.

There was no signage for At.mosphere in the hotel, so we asked someone at the reception desk who happily escorted us downstairs, checked us in and waited with us until the elevator arrived.

The elevator took exactly 60 seconds to whisk us up to the 123rd floor.

From there, we took a short flight of stairs down one floor to the entrance of At.mosphere, where we were greeted and shown to our seats.

When I made the reservation, I forgot to specify that we wanted a window seat, so we were initially seated at one of the inner rings of tables. You could barely see anything from there other than the vast expanse of desert off in the distance, so we asked if we could be moved to the window. The waiter confirmed the extra cost of 73 Emirati dirhams ($20) per person, which we were happy to pay.

The views from our window seats were much more impressive, and we spent at least five minutes staring dumbstruck out the window before we could even begin to think about food.

The restaurant was split into three or four seating areas, each with about 20 tables of window and inner seats.

There was a large bar in the center, though no one was sitting there (likely because it offered no views at all).

For the most part, the design was laid-back and unassuming, the polar opposite of everything around it.

Once we'd finally collected our bearings, it was time to think about the main event. Our waiter came over and asked whether we'd like Champagne or sparkling wine. Since tea was a set menu, this was pretty much the only decision we had to make. We paid the extra $30 or so for Champagne, which was served with an amuse bouche of cauliflower veloute and crispy squid.

After that, the food kept rolling in, as we were promptly served the next course of finger sandwiches. Going clockwise from the top left, there was foie gras with jellied apple, salmon with sour cream, a cheese tart with balsamic caviar, tomato bread with confit turkey, egg-salad sandwich with caviar and chives, and a lemon prawn eclair.

I don't eat foie gras, but the other five were a delicious medley. I really enjoyed the prawn eclair, which was just bursting with flavor, and the egg-salad sandwich that featured a mini caviar course on top.

After that, it was time for the main course. There was one meat and one seafood option on the menu, and my girlfriend and I ordered one of each. The meat was barbecue chicken with a cashew crusting, served with mashed potatoes and carrots. The seafood was scallops with the same cashew coating, mashed potatoes and asparagus.

The chicken was good, though a bit tough, while the scallops were absolutely incredible. I appreciated how small the portion sizes were, given how much food was yet to come.

Next up was the dessert tower, with duplicate platters of scones, pastries and cakes. This was served with mango-passionfruit jam, clotted cream and raspberry jam.

Like I mentioned earlier, something must have gotten lost in translation regarding our fifth anniversary, as our waiter brought out a lovely "Happy Honeymoon" cake. It was a nice gesture (after a bottle of Champagne, we sure got a good laugh out of it) but the truth is that we were so full we barely touched the cake.

Of course, there was one thing missing from this high tea: the actual tea! I opted for Earl Grey, while my girlfriend had a green tea.

Service throughout the meal was prompt and efficient, which is easy to do when everyone is working off the same set menu. Empty dishes never sat too long in front of us, but at the same time we were encouraged to eat at our own pace and enjoy the experience for as long as we wanted. Even with several other couples sitting at the tables around us, this whole experience felt very intimate. Our waiter did a great job staying out of the way and letting us enjoy the views while also providing top-notch service.

Before we left, I asked if it was possible to see the airport from At.mosphere. You can't, but the bathrooms offered an incredible top-down view of the famous Dubai fountains.

Satisfied with our afternoon, we made our way back downstairs and bade our farewells to this giant.

High tea at the Burj Khalifa is a pricey afternoon, but it was worth every penny. I'm generally disappointed with observation decks in tall buildings, as they're usually brief and over-hyped experience, so I loved having enough time to stop and really absorb the views from the top, and the delicious food certainly didn't hurt. The total cost ended up being pretty in line with what you'd pay for a very nice meal (and a bottle of Champagne), and, of course, the views are the absolute kicker.