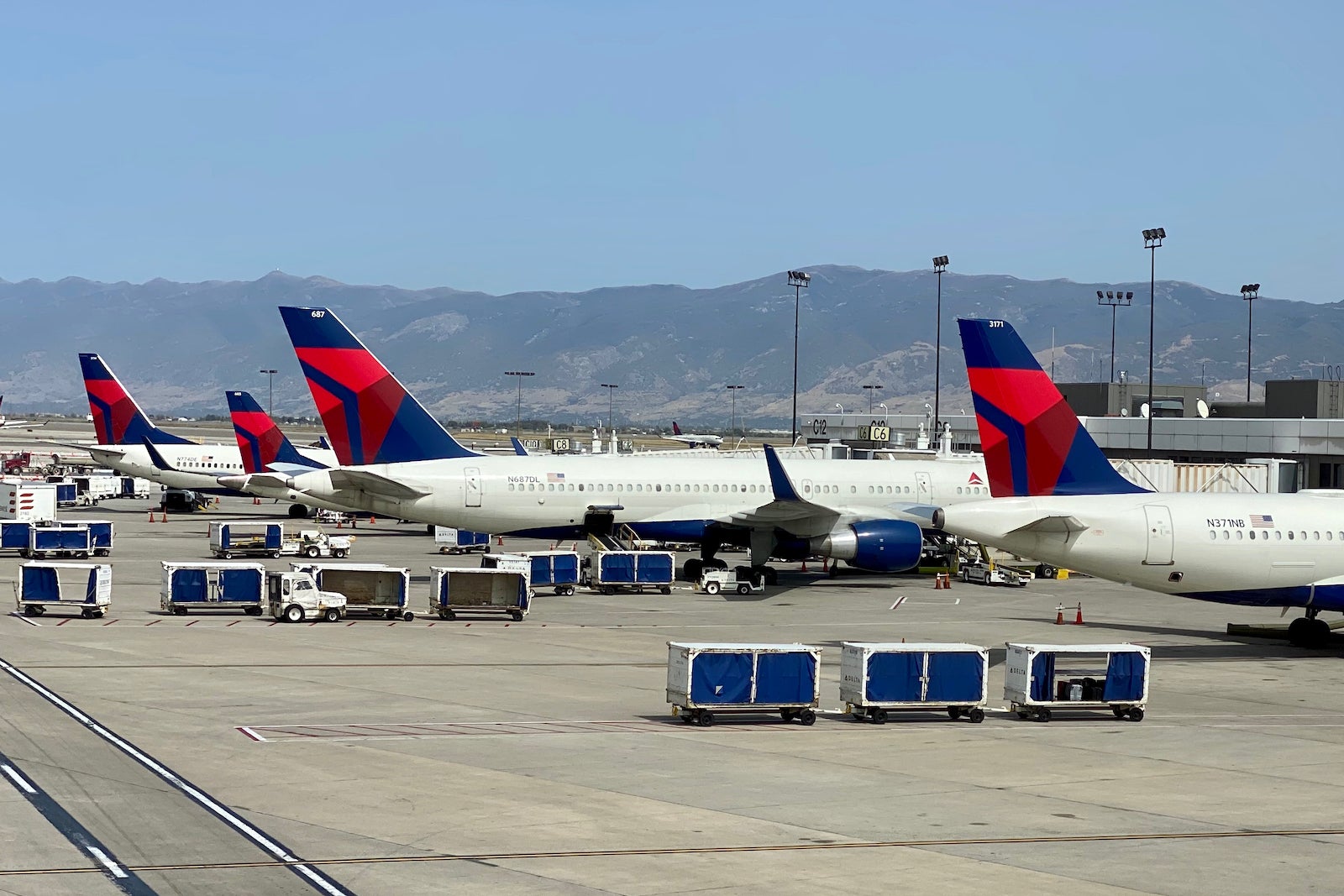 South Florida is just under 600 miles from Delta's Atlanta mega-hub.

While it might be easy for the carrier to simply funnel most of its traffic from South Florida through the Georgia capital, Delta is making a play for the local market.

In Fort Lauderdale, the carrier's terminal is undergoing a $153 million makeover that includes a brand-new Sky Club and other modernized amenities. Further south down the I-95 corridor, Delta is boosting its presence in Miami with its fledgling LATAM partnership. Meanwhile, the carrier's West Palm Beach outstation remains important for Delta to cater to both locals and visitors who prefer that airport.

At the preview event for Delta's newest Sky Club, TPG sat down with Luciano Macagno, Delta's managing director of sales for the South Florida region, to learn more about the carrier's ambitions in the region. Here's what he had to say.

With roughly 250,000 square feet of renovation and expansion to the existing terminal, the concourse is being rebuilt for the 21st century. This includes much higher ceilings, new terrazzo flooring, expanded and relocated TSA security checkpoints, modernized bathrooms and more.

Plus, the airline just opened its newest Sky Club, a snazzy space located on the mezzanine level above the terminal, with dramatic floor-to-ceiling windows, locally inspired artwork and eye-popping chandeliers.

"If you think of Delta, we are leaders in terms of service, in terms of our brand strength, in terms of everything that we do domestically. This is about bringing a little bit of that, or a lot of that if you want, into the region... It's really about building something, building what our customers need," Macagno said in reference to Delta's infrastructure development in South Florida.

While airport redevelopment projects continue to get accelerated nationwide, including in Delta's hub in Los Angeles and New York-LaGuardia, the story in Fort Lauderdale is different.

The work doesn't just continue to progress — it's moving ahead while the carrier's operations have already returned to pre-pandemic levels.

"This is one of the markets in which we are already, I'd say at 100% recovery in terms of the capacity that we offer. Ninety-seven percent if you want to be exact, but we're flying already what we were flying two years ago. And in fact, we've been able to launch some of our newer markets like Boston and L.A.," according to Macagno.

In fact, in May 2021, Delta operated 386 more flights there than it did in May 2019, well before the pandemic, representing a nearly 20% increase in flights and over 15% increase in the number of available seats, according to Cirium schedule data.

According to Macagno, there's been a healthy mix of locals and visitors flocking to the region for the beaches and relaxed COVID restrictions in the local area. With the new terminal and Sky Club, the hope is to continue convincing flyers to choose Delta for flights to Fort Lauderdale.

A Miami gateway hub is still the plan

Though the Fort Lauderdale expansion is an opportunity for Delta, the real opportunity lies further south, in Miami.

In September 2019, Delta took a 20% stake in LATAM, wooing the carrier away from the Oneworld alliance and its former partner, American Airlines.

In July 2020, the Atlanta-based carrier doubled down on its proposed pan-American partnership with LATAM that includes a new “gateway hub” in Miami. Delta unveiled plans to add at least 20 new U.S. domestic departures under its proposed joint venture with LATAM, though the timeline remains unclear.

Macagno echoed those plans during the interview, and downplayed any concern about increasing competition in Miami from incumbent American Airlines and newcomer Spirit Airlines.

That's partly because by partnering with LATAM, the carrier will get a steady market of travelers headed to the region, according to Macagno. "LATAM has already existing millions of customers that do travel, that do see Miami as their number one destination for business, for tourism. Miami is very aspirational for all Latin Americans."

Additionally, while Delta currently has an "average" number of Medallion elite members based in South Florida, Macagno believes that will change once the LATAM partnership hits full stride.

"As we fast forward and envision our partnership with LATAM, you can imagine [the number of Medallions] increasing quite rapidly. Also, LATAM has a base of loyalists here [in South Florida] as well."

Once the partnership receives all the regulatory approval it needs, Macagno sees the Miami operation working in tandem with Delta's Atlanta mega-hub. "In terms of our strategy, I don't think it will change. It's about continuing to maintain our strength through Atlanta, which is where we've been for decades. But also complimenting that with what our customers flying with LATAM through South Florida need."

This could include adding more domestic flights from Miami to destinations that are popular with travelers flying on LATAM. To that end, Macagno teased that "we'll be looking into how do we make sure that we have the best connecting experience in Miami." He didn't spill the beans on how the carriers will team up for seamless connections, but it sounds like something is in the pipeline.

There's a third airport in South Florida, but it's not necessarily Delta's primary focus for originating traffic.

Though the airports in Miami and Fort Lauderdale essentially pull from the same market, the dynamics of West Palm Beach are a bit different, according to Macagno. "It's a different perspective. I think it's part of South Florida just from the perspective of it being part of the beaches. But mostly as a destination, not as much as an origin."

Though it's just about an hour (on a good day) between Fort Lauderdale and West Palm Beach, most corporate customers and locals don't consider flying from PBI.

However, despite the smaller market of originating traffic, Macagno is impressed with "the strong loyalty" from the residents of the Palm Beach area. "We have a lot of loyalty and loyalists, and we have a pretty strong operation there, but it is very different from our market behavior [in Fort Lauderdale and Miami]."

Cirium schedules show that Delta's PBI operation is expected to be roughly 30% smaller in July 2021 compared to the same month two years ago. The carrier won't fly to Boston in July, and it has slashed frequencies in its four other markets from PBI (Atlanta, Detroit, New York-JFK and LaGuardia).

Delta's South Florida growth comes despite the pandemic that's caused airlines to rethink many markets around the country. The carrier's seeing an incredibly strong recovery in the area and expects to continue growing through its upcoming partnership with LATAM.

To Macagno, that also means convincing travelers that South Florida isn't just a destination with great beaches. "It's much more than that. It's a huge corporate community. It's a growing city. It's a very powerful international city."

That momentum hasn't changed due to the pandemic. "If anything, through the pandemic, it's just been getting better and better," Macagno concluded.

Related stories
How to save on a cruise: 33 money-saving tips from an expert cruiser
Hyatt elites are now eligible for instant American Airlines elite status — what you need to know
9 things to do when you get the Amex Business Platinum Card
The top suites on this super-swanky new cruise ship will cost $9,000 a night
Featured image by (Photo by Zach Griff/The Points Guy)
Editorial disclaimer: Opinions expressed here are the author’s alone, not those of any bank, credit card issuer, airline or hotel chain, and have not been reviewed, approved or otherwise endorsed by any of these entities.

Our points-obsessed staff uses a plethora of credit cards on a daily basis. If anyone on our team wouldn’t recommend it to a friend or a family member, we wouldn’t recommend it on The Points Guy either. Our opinions are our own, and have not been reviewed, approved, or endorsed by our advertising partners.
See all best card offers
Related stories
Guide
How to save on a cruise: 33 money-saving tips from an expert cruiser
News
Hyatt elites are now eligible for instant American Airlines elite status — what you need to know
Guide
9 things to do when you get the Amex Business Platinum Card
News
The top suites on this super-swanky new cruise ship will cost $9,000 a night