Cruise Ships Are Finally Going Back to Istanbul 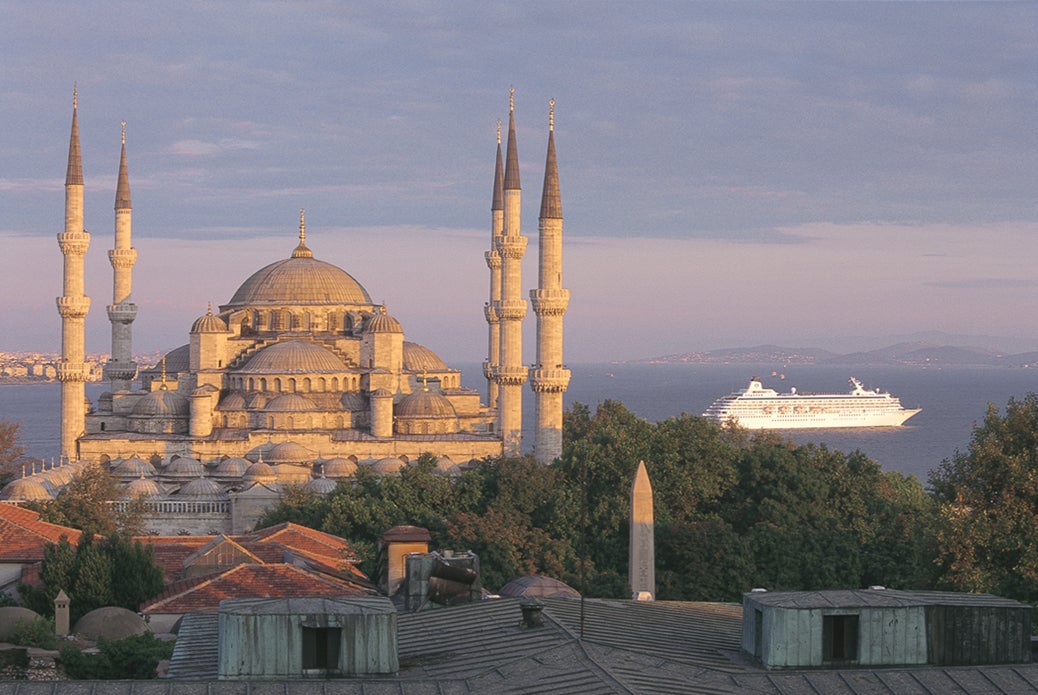 Cruise Ships Are Finally Going Back to Istanbul
This post contains references to products from one or more of our advertisers. We may receive compensation when you click on links to those products. Terms apply to the offers listed on this page. For an explanation of our Advertising Policy, visit this page.

The comeback of Istanbul as a hot spot for cruising has begun.

This month, Regent Seven Seas Cruises became the first North America-based line to resume sailings to the bucket-list destination since a wave of terrorist attacks in 2016 prompted a mass exodus.

Regent’s 700-passenger Seven Seas Voyager arrived in Istanbul on June 6 for a two-day stay that was the highlight of a 12-night “Eastern Mediterranean” sailing from Piraeus, Greece to Venice, Italy.

“The guests were very excited,” Christine Manjencic, Regent’s vice president of destination services operations, told The Points Guy. She added that city officials were, too.

“They really went above and beyond for the first call back,” Manjencic said, noting that passengers were greeted with a folkloric show on the pier. “There was a very good vibe.”

Home to such iconic sites as the giant Blue Mosque and Ottoman-era Topkapi Palace, Istanbul long has been one of the marquee ports of Mediterranean sailings. As recently as 2015, it was attracting more than 300 cruise ships and 600,000 vacationers a year.

But Regent and other cruise lines began pulling out of the city in waves in 2016 following a succession of incidents that included a suicide bombing in January at Istanbul’s main tourist square, a terrorist attack in June at the city’s main airport and an attempted coup in July that saw tanks in the streets.

“We are confident that now it is safe to go back,” Manjencic said. “The city for a few years now has been very quiet.”

Regent sent an advance team to Istanbul to assess the security situation before committing to the calls, Manjencic added. “Safety is our top priority.”

Regent is just one of more than half a dozen lines that have announced plans to resume voyages to Istanbul now that the security situation appears to have stabilized.

One small French line, Ponant, already has resumed occasional calls at Istanbul, and Greece-based Celestyal Cruises (a specialist in Eastern Mediterranean trips) has scheduled a return to the city in October.

Two lines better known to Americans, Oceania Cruises and Holland America, have scheduled voyages to Istanbul starting in May 2020. They’ll be followed in June 2020 by Silversea and Windstar.

Three more major lines — Viking Cruises, Azamara and Crystal Cruises — have announced plans for a resumption of Istanbul calls in 2021.

For some lines, the return still is a bit tentative. While Regent has put eight Istanbul calls on its schedule through the end of 2020, Silversea and Windstar each have just two calls in the city planned over the same period.

In a conference call with Wall Street analysts in February to discuss fourth-quarter earnings, the chairman of Norwegian Cruise Line Holdings, Frank Del Rio, suggested the comeback of Eastern Mediterranean voyages including Istanbul calls is just beginning. The company is the parent of Regent as well as Norwegian Cruise Line and Oceania Cruises.

“You test the waters. You see what happens. And then it takes you a while to really ramp up,” Del Rio said.

He noted that many of the company’s itineraries are set 18 months to two years in advance. “At this point, assuming that there are no other disruptions or reasons to not go to the [Eastern Mediterranean], I expect that we, along with the rest of the industry, will probably increase the number of deployments … beginning in 2020 and [add] more in 2021.”

Manjencic told The Points Guy there was big pent-up demand from Regent customers for trips to Istanbul, given it had been off the schedule for more than three years.

“What we are seeing is that people are jumping to get back there,” she said.

Istanbul isn’t the only Turkish port making a comeback. Several small lines including Azamara and Windstar already have returned to Kusadasi, Turkey, the gateway to the famed ruins of the ancient Greek city of Ephesus. They’ll be joined in July by Oceania, which has three calls at the port planned for 2019. Princess Cruises, Holland America and Seabourn also have announced plans to return to Kusadasi, but not until 2020.

Regent’s first voyage back to Istanbul this month also included a day visit to Kusadasi as well as stops at several Greek islands. But it wasn’t the first time Regent had returned to Kusadasi since 2016. Regent offered a single stop at the port last year.

Regent has nine calls at Kusadasi planned for this year — all related to its expanded lineup of Eastern Mediterranean sailings with Istanbul as a highlight.

“When the [Eastern Mediterranean] is good, it's as good as any, if not the best, of all itineraries,” Del Rio noted in his February talk with Wall Street analysts. “We are all looking forward to being able to increase our presence there.”