The Crazy History Behind the TWA Hotel's Retro Airplane Restaurant 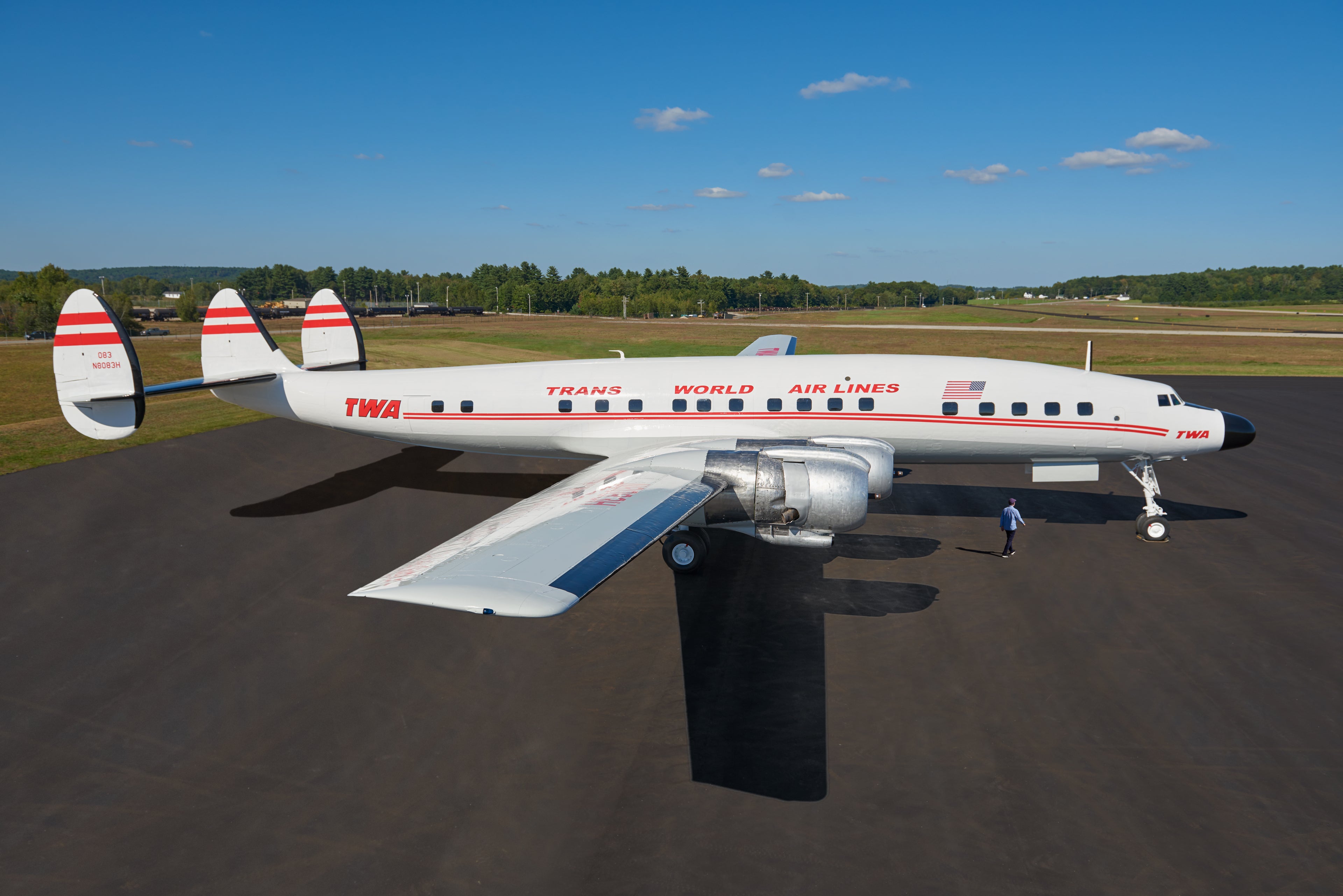 The Crazy History Behind the TWA Hotel's Retro Airplane Restaurant
This post contains references to products from one or more of our advertisers. We may receive compensation when you click on links to those products. Terms apply to the offers listed on this page. For an explanation of our Advertising Policy, visit this page.

The TWA Hotel has been in development for quite some time, but it's now closer than ever to completion and one of its signature features will soon be on display. Yesterday, the team behind the hotel, MCR and MORSE Development, showed off the crown jewel of the property: a semi-restored TWA Lockheed Constellation decked out in the airline's original livery. It will act as a restaurant and cocktail lounge for the new hotel.

For those unfamiliar with the project, the historic Trans World Airlines terminal at New York's JFK airport is being restored and a full-scale hotel is being built in-between the the older terminal and Terminal 5, home to JetBlue. The terminal will look just like it did in at the height of TWA's success in 1962, which many refer to as the "Golden Age of Travel." MCR is fashioning the hotel in a retro scheme.

The TWA terminal was designed around the Lockheed Constellation, referred to as "Connie" for short, a beautiful quad-engine prop aircraft that became one of the first pressurized aircraft to go into widespread commercial service. But TWA was victim to horrible timing and in 1960 the Boeing 707 was introduced. The 707 was the first commercial jetliner that revolutionized passenger air travel, but was too big to be used at TWA's customized designed terminal. This left the terminal, although still gorgeous on the inside, ineffective — an extension had to be added to accommodate larger aircraft, including the new Boeing 747 jumbo jet.

In between the TWA Flight Center and Terminal 5, will sit Connie, a former TWA Lockheed Constellation, which is one of only four Starliner models left in the world. It will soon be transformed into a restaurant and cocktail bar for hotel guests and public visitors. Interested parties can even rent out the space for personal and business events. MCR Development CEO Tyler Morse said that an engaged Delta pilot and Southwest flight put their wedding on hold for more than a year just so they could hold an event in the aircraft aircraft once it's ready.

"We're recreating 1962," said Morse. He explained that once the aircraft's interior is installed, it will feel like you've stepped back in time. They've restored the cockpit with the original avionics and even installed original Lockheed logos and foot pedals. The navigator's window, used by the crew to look up into the night sky to spot the North Star to guide the plane, will be kept too.

"You're going to feel like you've walked back into 1962, without the cigarette smoke," Morse said.

The interior will feature four rows of recreated seats from a 1958 TWA Constellation so visitors can experience what it was like to travel before seat pitch was less than 30 inches.

"It's going to be a full theatrical experience down to the uniforms, gift bags and the food that we serve," said Morse. He added that MCR was studying actual TWA in-flight menus as inspiration for the new restaurant. "The food on aircraft used to be amazing... airlines competed on service, not price."

Although the menu hasn't yet been revealed, Morse said they're working with celebrity chefs to develop food offerings. The 1,600 square foot space will hold 110 to 120 people.

This Constellation has had quite the adventure and actually did begin its life as an aircraft for TWA. Registered as N8083H, it began service with the now defunct airline in May of 1958. Its career with the carrier was short-lived as it was retired from commercial service in 1960 with the introduction of the Boeing 707 jetliner. The airline transitioned it to shuttling cargo in Alaska, and its transformation into a bush plane was complete.

It only lasted five years up North. In 1967, TWA completely ended all Constellation flights. From there it was ferried around the country with multiple owners, including one person who bought it for just $150.

In a bizarre twist of events sounding like something out of Netfilx's Narcos or American Made, the Connie fell into the hands of South American drug smugglers in the 1980s and was modified to airdrop marijuana.

An accident left the aircraft stuck in the mud with a damaged propeller at a remote airstrip in Colombia. It eventually made it's way to San Pedro Sula, Honduras where it was abandoned.

A gap remains in it history, with Morse mentioning "the feds" repossessed it as one owner was indicted on tax fraud — it somehow traveled to Florida where it was then purchased by Maine Coast Airways owner Maurice Roundy in 1986. He transported it to Auburn-Lewiston Airport in Maine with hopes to restore the aircraft to its former glory and it's been there ever since

Roundy's plan didn't pan out and in 2007, Lufthansa purchased N8083H for parts to restore its own Constellation. In 2018, MCR purchased the aircraft from the German airline conglomerate and started repairs so it could function as part of the hotel.

The dissembled aircraft is currently sitting in an exposed hanger in JFK, which I had access to, and will soon be dropped by crane in between the hotel and Terminal 5.

The aircraft is named the "Star of America" which is painted below the cockpit windows.

After being taken apart and loaded onto a flatbed truck with a custom bed in Maine, it was transported via convoy across five states — the truck blew out three tires on the journey. When the third tire popped the truck had no more spares, so a new wheel had to be brought in while Connie sat on the side of a Massachusetts' highway. This attracted loads of media attention and even landed Connie a mention on Saturday Night Live's Weekend Update.

The TWA Hotel Opens in Spring 2019 and will feature 512 guest rooms, a rooftop bar and pool that overlooks JFK's runways and six restaurants. Reservations will open in early 2019 for Connie. Once the aircraft is fully assembled, it will complete the TWA's Hotel's goal of time travel and bringing back the Golden Age of travel.