I just boarded the first major cruise ship to sail from a US port in 15 months; here’s what it was like 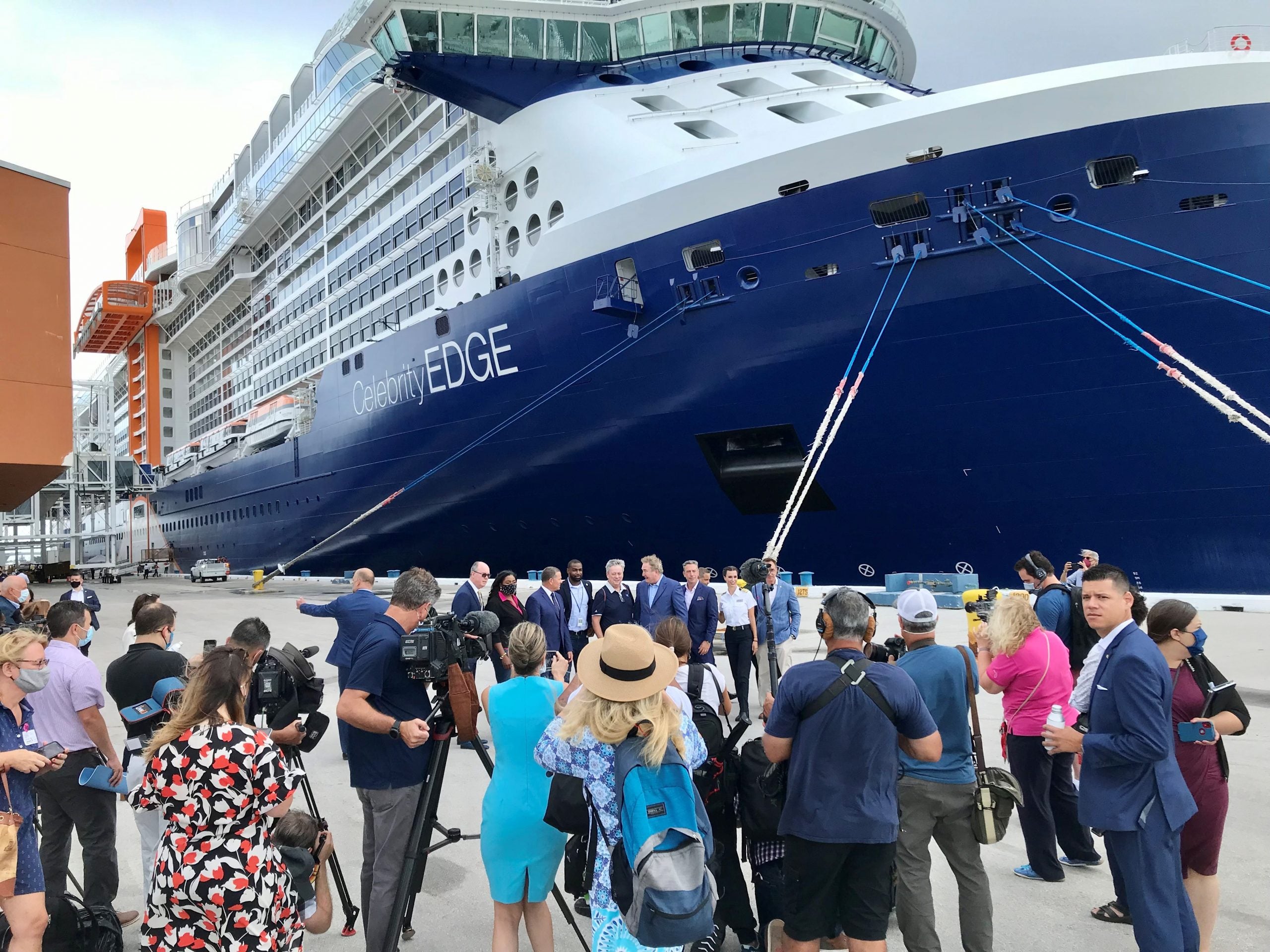 TPG's Gene Sloan will be sailing on Celebrity Edge as a guest of Celebrity Cruises. TPG paid for all his travel to and from the ship. The opinions expressed below are entirely his and weren't subject to review by Celebrity.

In the end, the new Florida law prohibiting vaccine mandates didn't matter much at all.

As I saw first-hand on Saturday, the boarding process for the first big-ship cruise out of a U.S. port in 15 months was about as smooth and efficient as could be -- and, perhaps most importantly, without noticeable drama related to questions about COVID-19 vaccines.

Of the nearly 1,200 passengers who arrived at Fort Lauderdale's Port Everglades on Saturday to board Celebrity Cruises' Celebrity Edge, 99% were fully vaccinated for COVID-19 and came ready to show proof, according to the line.

That's well over the 95% threshold that Celebrity needed for Celebrity Edge to sail on Saturday under terms set by the U.S. Centers for Disease Control and Prevention (CDC). And it may be a sign that all the Sturm und Drang over how Florida's vaccine law would affect cruise departures out of the state as cruising restarts might have been much ado about nothing.

Celebrity is just the first of several lines that plan to restart cruises out of Florida and other U.S. ports over the coming weeks as big-ship cruising finally resumes in U.S. waters.

With the exception of a handful of very small cruise vessels that operate on U.S. rivers and intracoastal waterways, cruising out of U.S. ports has been completely shut down since the coronavirus outbreak was declared a pandemic in March 2020.

To recap, Celebrity initially wanted to require all passengers over the age of 16 on sailings out of Florida to show proof of a COVID-19 vaccine. That would have ensured that the line met the 95%-of-passengers-vaccinated threshold wanted by the CDC. But Florida's new vaccine law prohibits businesses in the state from requiring customers to show such proof.

At first, this seemed to create a conundrum: How could Celebrity ensure 95% or more of passengers were vaccinated if it couldn't require them to prove it?

Celebrity's late-in-the-game solution was to make it voluntary for passengers to show proof of a COVID-19 vaccine but to add on very heavy incentives to do so. The line earlier this week said passengers who didn't show proof of a COVID-19 vaccine would be considered unvaccinated and subject to repeated COVID-19 testing before and during sailings at their own expense (the price tag is a hefty $178 per person).

In addition, the line said passengers not showing proof of a COVID-19 vaccination would have to wear masks at all times on board (something vaccinated passengers would not have to do) and might be restricted to designated seating areas in some parts of the ship. They also might not be able to disembark in some ports.

That seems to have done the trick. As I was boarding the ship on Saturday, I didn't see a single passenger balking when asked to show a vaccine card. I pulled mine out along with my passport during the check-in process, and it took all of 15 seconds for a port staffer to check it and scan it into an iPad-like device.

A high-level Celebrity executive told me later that there only were about two dozen passengers out of 1,195 scheduled to board on Saturday who were unable to show a COVID-19 vaccine card. And nearly all of these were children under the age of 12 who currently are not eligible for vaccination.

The issue of passengers who were old enough to be vaccinated arriving without a vaccine card or refusing to show their vaccine card simply did not materialize.

A smooth and quick boarding process

Two weeks ago, I wrote about the hour-long process to get aboard the first Royal Caribbean cruise in the Caribbean in 15 months -- a cruise that departed out of Nassau in the Bahamas. It was a lengthy process mostly because everyone boarding was tested for COVID-19 at a hotel before proceeding to the pier where the ship was docked.

The boarding process for Celebrity Edge was much quicker and so uneventful that there's really not much to say about it. Other than being asked to show my COVID-19 vaccine card, which as noted took all of 15 seconds, it was a cruise check-in like any other I have experienced in recent years. I had done most of the check-in on the Celebrity app in advance of arriving at the pier, and it just took a minute at a check-in desk to get everything finalized before I went through the metal detectors at port security and headed toward the gangway.

From the moment I started the process to the moment I was on board, fewer than 15 minutes passed. There was no COVID-19 testing and no temperature checks.

In short, don't expect anything out of the ordinary if you're heading to a Celebrity cruise out of Florida in the coming weeks.

What was different at the pier on Saturday was the very noticeable mood of excitement and celebration. From the check-in and security staff at the port, which is located within Florida's Broward County, to the crew on Celebrity Edge as well as Celebrity executives on hand, everyone was all smiles.

As Michael Udine, the vice mayor of Broward County, noted during a press conference in advance of the start to boarding, the 15-month-long shutdown of cruising directly affected 6,000 jobs in the area related to the cruise industry. The wider hospitality and tourism industries in the county employ 84,000 locals, he said.

"The cruise industry is critical to Broward County's tourism economy, and our workforce has suffered since the cruise lines voluntarily suspended operations," Udine said.

As passengers boarded Celebrity Edge during the day, the ship's social media-famous captain, Kate McCue, and crew members cheered them on from the top of the gangway.

Earlier in the day, at the same press conference where Udine spoke, McCue -- known on social media as Captain Kate -- said it was a day she had been dreaming about for more than 15 months.

"I don't just speak for myself but also the entire crew when I say that sailing and traveling worldwide by sea is our passion," McCue said. "You can truly feel the palpable sense of excitement and energy among the (crew) as we prepare for our welcome and our first guests."

McCue added that she had "never honestly seen a group so excited to get back to work."

Moments later, McCue choked back tears as she recounted how Celebrity Edge had blown its horn each day while anchored offshore during the pandemic with other idled cruise vessels. They did it to let everyone know that they "were safe, healthy and happy and wishing the same for everyone that was around us, these other ships," she said.

"From this day forward, when you hear the ship's horn, I hope it reminds you that through any hardship, with hope, you can -- and will -- rise again," McCue added.

McCue then ordered the ship to blow its final horn salute of the pandemic.

Earlier at the same press conference, Richard Fain, the chairman and CEO of Celebrity's parent company, Royal Caribbean Group, spent much of his time on the podium praising Celebrity Edge's crew, who he said had been "getting ready for the guests with such an amazing level of passion."

In a moment of levity, he also broke out into song, singing the opening lines of Jimmy Cliff's 1993 version of "I can see clearly now," which he said the day's events brought to mind.

TPG’s Gene Sloan will be reporting live from Celebrity Edge for the next week as it sails to Mexico and the Bahamas. You can find all his dispatches at his author’s page.

Featured image by Celebrity Cruises executives and port executives pose for media in front of Celebrity Edge in advance of its sailing from Port Everglades. (Photo by Gene Sloan/The Points Guy)
Editorial disclaimer: Opinions expressed here are the author’s alone, not those of any bank, credit card issuer, airline or hotel chain, and have not been reviewed, approved or otherwise endorsed by any of these entities.