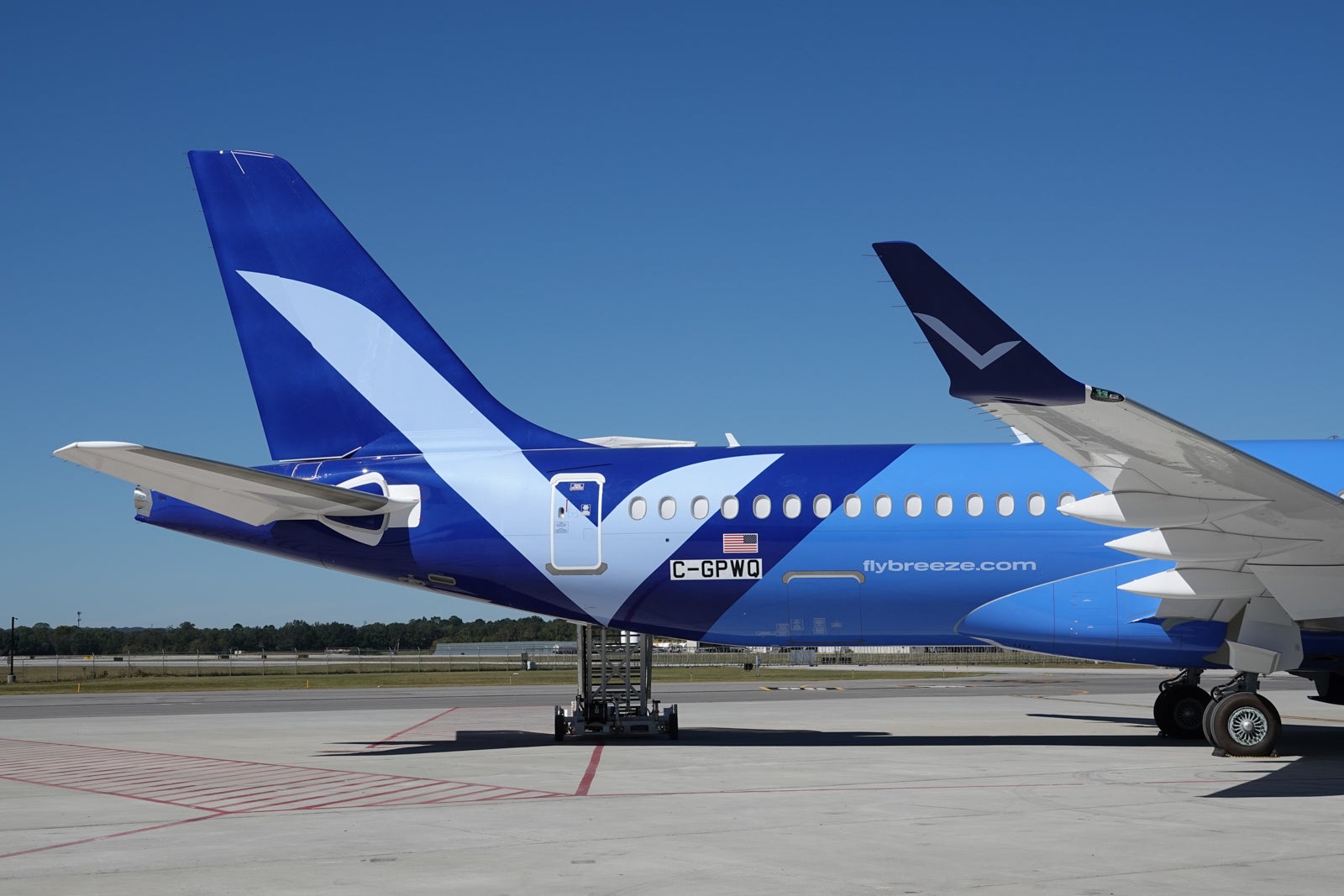 Breeze Airways launched earlier this year as one of the nation’s newest startup carriers.

The hotly anticipated inaugural was the latest from serial airline entrepreneur David Neeleman, perhaps best known in the U.S. for founding JetBlue.

Since its mid-May launch, the airline, which had been in the works for at least three years under codename “Moxy,” has connected 16 midsized markets with 39 routes, focusing on cities that are too small for major carriers to serve beyond flights to their hubs.

And now, the airline is gearing up for its biggest moment yet: adding the first of 80 new Airbus A220 jets into its fleet.

On the evening before the A220's unveiling, Neeleman briefed select media about the significance of the plane and future plans. As many industry observers know, when Neeleman talks, everybody listens. So, come along for the ride and hear what the airline's founder had to say.

Perhaps the most surprising news from the long-time aviation executive was that Tuesday marked his first time visiting Mobile, Alabama, and the Airbus assembly plant there. Airbus A320 and A220 family aircraft destined for North American airlines are built at the company’s Mobile facility.

It wasn’t just Neeleman’s first time in Mobile — it was also his first time seeing the Breeze Airbus A220 in person.

“It’s an exciting day for Breeze, and for me. I’m seeing the plane for the first time with all of you tomorrow” he told TPG and the gathered reporters at the dinner reception.

Naturally, the executive has seen plenty of mockups and pictures — he kept rattling off facts about the plane's configuration — but Tuesday marked the first time he saw the finished product.

The Airbus A220 is going to open up a plethora of new markets for Breeze.

Until now, the airline has been mum about its planned expansion with the A220 — and Neeleman kept the secrets to himself at the reception.

He did tell reporters that “we’ll start flying the plane in the first or second quarter. April 1 is the target date for the launch, and we’ll make some route announcements” before that.

Pressed for a more concrete example of an A220 route, Neeleman said that they’ll be “decidedly more long-haul.”

At first, we'll see "some A220s out of our bases in Charleston, Norfolk, Tampa and New Orleans to places we don’t fly today.”

It’s anyone’s guess where else the A220s will land, but Neeleman kept using the descriptors of "long haul" and "transcontinental."

Nearly half of the space of Breeze A220’s cabin will be occupied by first-class recliners.

That’s right: the plane will feature a whopping 36 “Nicest” first-class seats — one of the most you'll find on any domestic jet. Looking just at the A220, North American operators Air Canada and Delta have just 12 first-class seats on their versions of the jet while JetBlue's A220s are in an all-coach configuration.

As you can see from the cabin tour, first-class recliners are installed from the nose of the plane all the way to the over-wing exit. (It’s almost like the domestic version of United’s “high-J” Boeing 767-300ER.)

Neeleman rationalized this premium-heavy configuration as follows: “Because of the 2-3 [coach] configuration on the A220, when you add first class and go to a 2-2 configuration, you give up half as many seats as you would on the Boeing 737 or Airbus A320 [which are outfitted in a 3-3 arrangement in the coach cabin].”

By giving up half the number of coach seats, Neeleman reasons that Breeze only needs to recover the revenue from one missing coach seat per row. On a transcon that could translate to a “50-buck upcharge” for the "Nicest" first-class fare bundle, a deal that Neeleman thinks many flyers will purchase.

Related: Inside Breeze Airways’ swanky Airbus A220 with a whopping 36 first-class recliners

The Airbus A220 will be Breeze’s most technologically savvy jet — and I’m not just referring to the cockpit.

In the cabin, the airline will offer universal power ports in first class, along with USB-A and USB-C ports for both first-class and economy passengers. The airline will also offer streaming entertainment, too.

Additionally, Breeze is in the final stages of selecting an inflight Wi-Fi provider for the new jets, with a decision promised in “the next few weeks.”

Neeleman is touting “free texting” at minimum with a “nominal charge otherwise” for coach flyers. Perhaps the airline will adopt the Spirit or Delta model, which offer $3 and $5 flight passes, respectively.

First-class passengers will receive free Wi-Fi access throughout the flight.

An overnight interior retrofit is possible

This one was interesting.

But, what if premium demand softened and the airline wanted to add more economy seats?

Thanks to the A220’s standardized overhead bins and passenger service units, Neeleman said the airline can add or remove the first-class seats as it wishes. It could take a few days to perform the upgauge or downgauge, but Neeleman cited “seasonal trends” as a reason to modify the number of premium seats.

The concept of a days-long interior retrofit might sound a bit farfetched to skeptics, but if there's anyone who can pull it off, it'd likely be Neeleman.

“We’re going to experiment with it and see how it goes," Neeleman responded when a reporter asked whether this concept would actually work.

For now, Breeze’s A220s are outfitted with Safran Z600 first-class recliners up front.

That could change, said Neeleman. “We can put lie-flat seats on this airplane,” he smiled as he excitedly told reports. The aircraft could fit “about 21 lie-flats in the front.”

Adding lie-flat pods to the fleet is something that’s already been publicly discussed by Neeleman, should the move make sense down the road.

“Seven hours down to South America would be very attractive,” Neeleman continued as he discussed the prospect of adding fully-flat business-class pods to his new jets.

Until then, however, you’ll find “just” 36 domestic first-class recliners upfront — giving Breeze the award for the most premium-heavy A220 you’ll find in the domestic skies.

The E-Jets still have a place in the fleet

When Breeze launched service in May, it did so with a small fleet of used Embraer E190 and E195 jets, some of which it received from another of Neeleman's airline startups — Brazilian carrier Azul.

These planes are six to seven years old on average, according to Neeleman, and they've required some serious maintenance work to get them in the sky.

This has led to some long departure delays for Breeze flights, inconveniencing the operation during the airline's first few months.

Despite these setbacks, Neeleman is committed to keeping the E Jets. "These planes are so cheap," he told the gathered journalists, "it's way under $100,000 a month... almost insignificant."

He continued to explain the E190s will be kept for charters — a segment that has kept Breeze busy recently — while the E195s will be used for passenger flights.

So, going forward, Breeze will have three planes in its fleet: the existing E190 and E195 jets, along with a batch of factory-fresh (and snazzy) Airbus A220s.