Articles
Clint Henderson is the managing editor for news at TPG. He worked in TV news for 20 years, including stints at ABC, MSNBC and Fox, before landing his dream job. Send tips to Clint.Henderson@thepointsguy.com.
Follow
May 04, 2022
•
5 min read 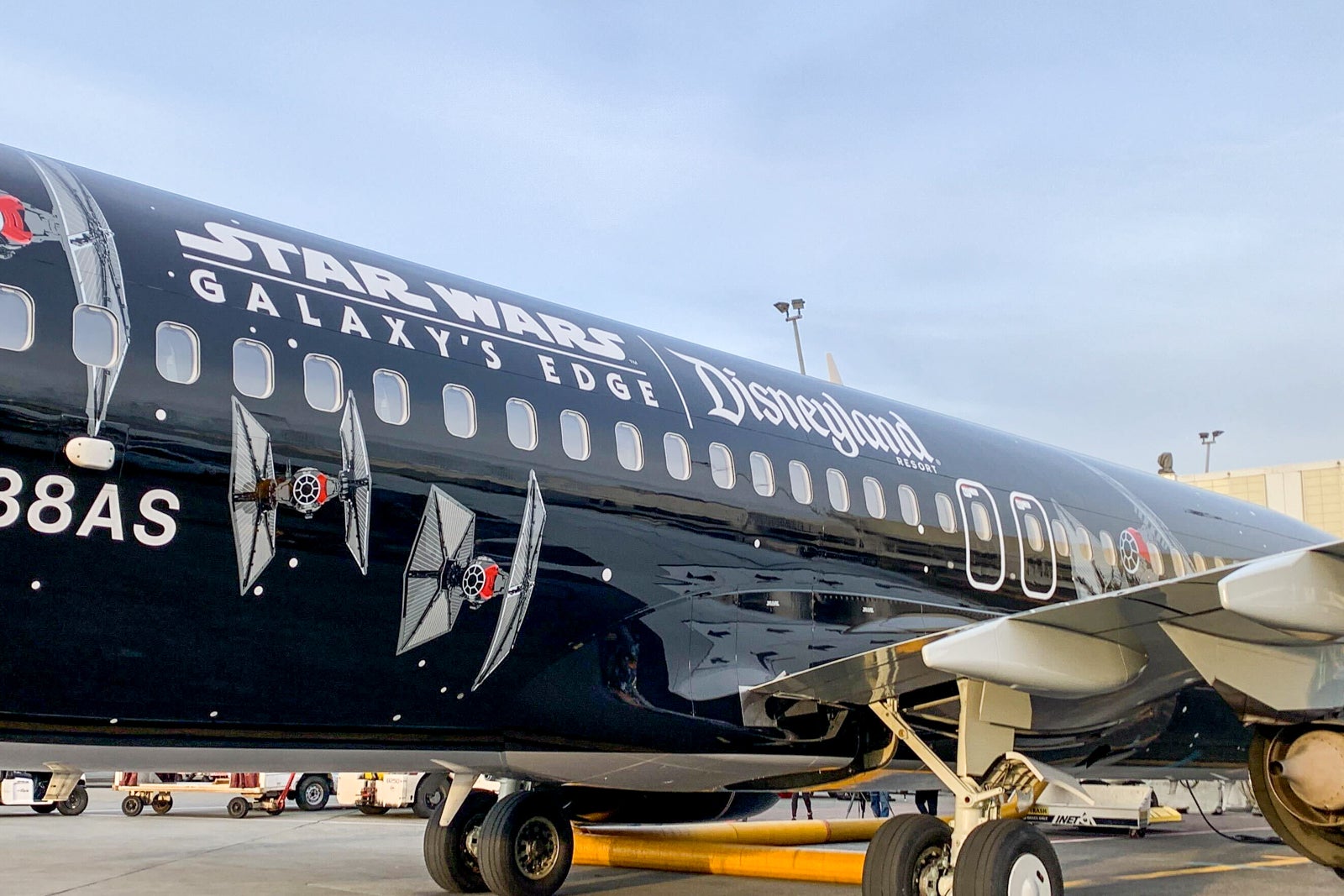 I got a behind-the-scenes look at Alaska's brand new 'Star Wars' plane
This post contains references to products from one or more of our advertisers. We may receive compensation when you click on links to those products. Terms apply to the offers listed on this page. For an explanation of our Advertising Policy, visit this page.

TPG's Clint Henderson took a free flight to Santa Ana, California, to attend a preview event for the new Alaska Airlines livery. The opinions expressed below are his and weren't subject to review by Alaska or Disney.

May the fourth be with you.

Alaska unveiled a new "Star Wars"-themed plane Wednesday in Seattle for a special charter flight to Disneyland, just in time for May 4. The date is increasingly being used to celebrate all things "Star Wars." In fact, all day on Alaska flights, customers wearing "Star Wars" clothing or costumes get priority boarding.

The plane is sleek, with a black fuselage with "Star Wars Galaxy's Edge | Disneyland Resort" written on the side. Alaska branding remains in its traditional spot in front of the wings in white. The Boeing 737-800 plane with registration number N538AS has been with Alaska for some time ... nine years to be exact.

"The new plane is beyond cool," said popular Disney influencer Michael (he doesn't share his last name). He runs the Instagram account MichaelDoesDiz and attended the inaugural. He told me he loved being on the brand-new "Star Wars"-decorated plane, "I think it's so awesome to be able to see some of my favorite stories brought to life."

The Alaska Airlines “Star Wars Transport to the Disneyland Resort” aircraft flew us from Seattle-Tacoma International Airport (SEA) to Orange County’s John Wayne Airport (SNA), which the airline calls "a gateway to Disneyland."

"The transport to Star Wars is a great representation of our collaboration with Disneyland Resorts. We've been partnering with them for more than 20 years," Natalie Bowman, managing director of marketing and advertising at Alaska Airlines, told TPG. "It's just great to introduce a new world to our guests."

Bowman told assembled guests, "We are so excited to enter this aircraft into our fleet." She said the plane took over 500 hours to paint, and called it "one of the most detailed aircraft out there."

"We are so excited to celebrate this longtime collaboration," said Lynn Clark, vice president of sales and services for Disneyland Resort, who closed her comments by saying, "May the force be with you all."

The airline went all-out for the launch of the new livery. A special boarding area was decorated to resemble the entrance of a spaceship.

There were several "Star Wars"-themed backdrops for guests (and some fun Alaska employees) to take pictures in front of.

There was even an R2-D2 on hand to take pictures with guests.

Of course, the real star of the show was the jet. Alaska confirmed to me that it is the carrier's first "Star Wars"-themed plane, even though it's had a long collaboration with Disney.

Inside the plane, there were lots of gifts for guests.

There were some good souvenirs for "Star Wars" fanatics, including special Mickey Mouse ears at each seat. Guests had two options: BB-8 ears or ones decorated like Chewbacca. There was also a Mickey Mouse rice crispy treat dipped in chocolate, as well as Star Wars: Galaxy's Edge badges.

Additionally, super cute porgs could be found throughout the plane and at each seat.

Alaska flies multiple times a day between Seattle and Santa Ana mostly with Airbus A320 jets.

The airline has a lot of competition with several carriers at the airport. John Wayne Airport has been on a bit of a growth spurt despite the COVID-19 pandemic. Southwest Airlines is the largest carrier at the airport, with American Airlines and United Airlines close behind. However, the airport is also served by Allegiant, Delta, Frontier and others. American Airlines even offers transcontinental service to New York's John F. Kennedy International Airport (JFK) featuring the specially configured premium-heavy A321T.

Related: Is the new Star Wars: Galactic Starcruiser ‘hotel’ really worth it?

It's always fun to see a plane get its new livery unveiled, and this was no exception. It's actually my second "Star Wars" plane. I happened upon a United plane decked out in "Star Wars" livery (since removed) last year, but this one is really over the top.

If you want to try to find the plane to book your own "Star Wars" adventure, call Alaska and tell them the plane registration number is N538AS. You can find where it's going next by using flight-tracking website Flightradar24.