Articles
Caroline Tanner covers news and travel for TPG. She is a journalism graduate of Mizzou and Northwestern.
Follow
Oct. 28, 2021
•
8 min read 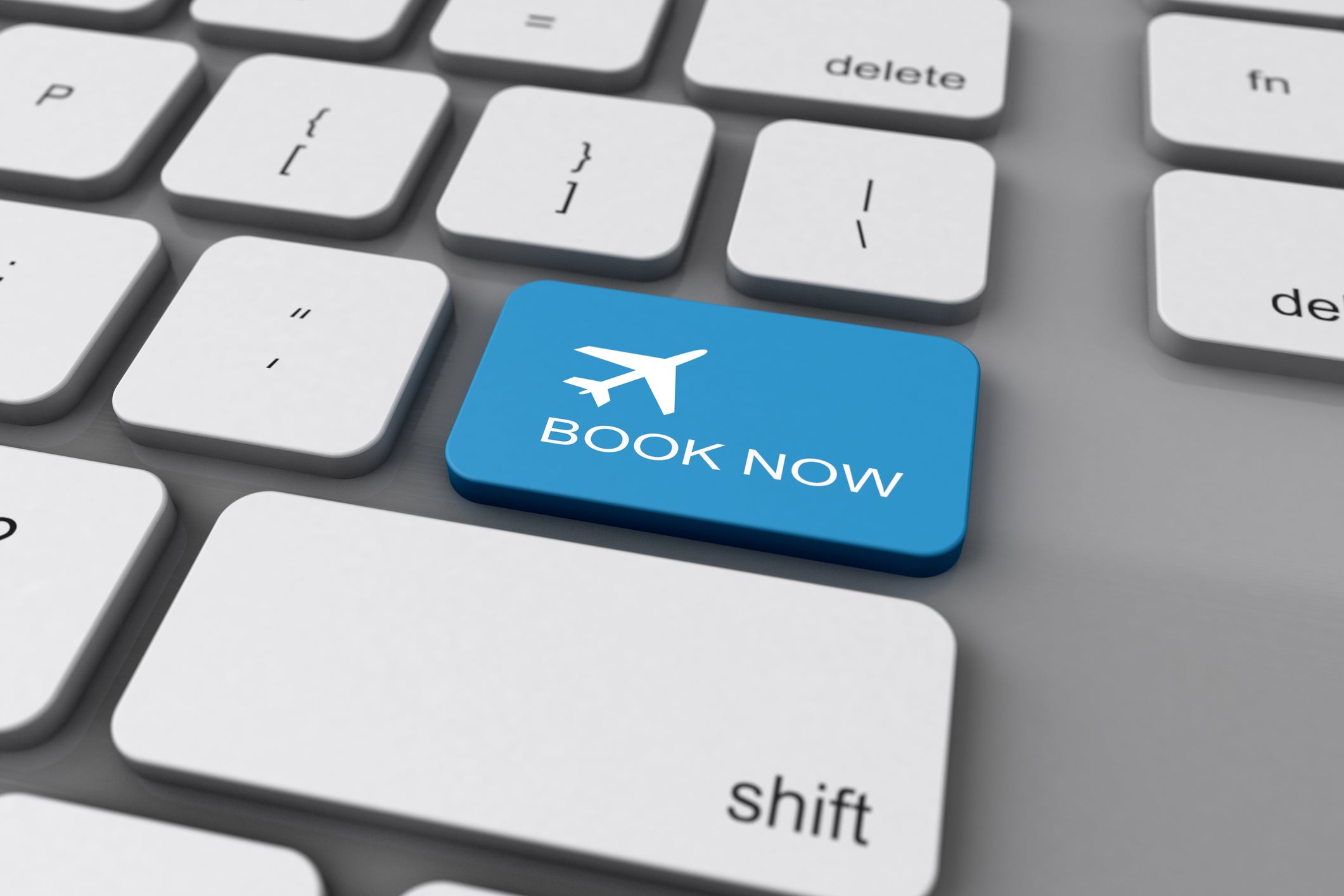 Book your holiday travel now — Airfares expected to jump 18% over next 2 months
This post contains references to products from one or more of our advertisers. We may receive compensation when you click on links to those products. Terms apply to the offers listed on this page. For an explanation of our Advertising Policy, visit this page.

Although airfares modestly climbed 5% from August to September, fasten your seatbelts, put your chair in an upright locked position and get ready for a bumpy ride. Airline experts and airlines alike say airfares are set to rise even further thanks to a combination of airline staffing shortages, increased interest in travel and a seven-year high among jet fuel prices, all wreaking havoc on fliers' ability to find any bargains for travel this year.

It's a classic tale of supply and demand — after a slower than expected summer, airlines now find themselves scrambling to keep up with increased passenger demand with a limited supply of seats and flights for upcoming holiday travel, according to a conversation with Cirium, the airline data company.

That's created a wrinkle in the usual supply-and-demand equation, which means bargain-seeking travelers are running into other factors that could result in a pain in the you know what: staffing shortages and rapidly rising jet fuel prices.

"Higher jet-fuel prices lead to higher ticket prices," United CEO Scott Kirby told CNBC on Oct. 20. "Airfares are going to come back from the really, really low levels they got to during the pandemic, but air travel is going to remain a great bargain."

In addition to expensive jet fuel, we are seeing a trend of rising demand, documented in travel agency air ticket sales, which increased 175% year-over-year in September 2021, rising to $3.2 billion this year from $1.2 billion last September, according to data released last week by Airlines Reporting Corporation. ARC noted that when looking at month-over-month ticket sales, international trips increased by 3% last month, while domestic trips increased less than 1%.

“This year, month-over-month sales started to decline between July and August due to travel restrictions triggered by the delta variant," Steve Solomon, vice president of global sales at ARC said in a statement. "We’re encouraged to see that decline leveling off, and ticket sales and trip numbers improving with the news of international travel to the U.S. becoming easier for vaccinated travelers beginning in November.”

Related: Brace yourself: It may be a rough holiday travel season — but not for the reason you think

To add insult to injury, a number of U.S. airlines are facing a nationwide pilot shortage, which came after carriers solicited voluntary buyouts at the peak of the pandemic only to have travel come roaring back this fall. Overall, that's sure to impact travel well beyond the lifeline of this story, the effects of which we've already seen.

Earlier this month, we saw Southwest Airlines cancel more than 1,800 flights during the weekend of Oct. 9. That operational meltdown followed a summer of delayed flights and — later — planned cuts for fall, as the Dallas-based airline grapples with the loss of more than 600 pilots (that's between 6% and 7% of their pilot workforce) due to early retirements and buyouts in 2020. In late August, Southwest announced reductions to its flight schedule for the rest of the year, including over the holidays, in an attempt to get ahead of the cancellations and delays that plagued the airline over the summer.

But Southwest is not the only major U.S. carrier facing staffing shortages. Pilot unions from both Southwest and American Airlines have warned of a potential "exodus of pilots and mayhem during the holiday travel period" as a result of many airlines requiring their staff to be vaccinated. Thus far, three of the big four airlines, American, United and Southwest, have all implemented a vaccinate mandate for their employees, pilots included, leading to further division between pilots and corporate.

Despite efforts by the Southwest Airlines Pilots Association to block their employer from imposing the vaccine mandate, a district judge ruled in favor of the airline on Oct. 27, allowing them to proceed with requiring employees to be vaccinated. Even so, both Southwest and American Airlines have publically said they don't anticipate firing unvaccinated staff, and Southwest rolled back earlier comments threatening exempted unvaccinated workers with unpaid leave should they fail to meet the December vaccination deadline.

Similarly, American CEO Doug Parker recently said the airline would be "exploring accommodations that would allow [unvaccinated] employees to continue to work," per reporting by CNBC. Although United seems to be holding strong in enforcing unpaid leave for employees with vaccination exemptions, a federal judge in Forth Worth temporarily blocked the airline from doing so.

Another volatile part of the airfare equation is the recent upward price of jet fuel in the U.S., which in September reached its highest level since November 2014. Jet fuel prices increased 20% from $1.90 to $2.26 per gallon last month, according to data from the U.S. Energy Information Administration, which shows U.S. Gulf Coast Kerosene-Type Jet Fuel is currently $2.33/gallon, most comparable to its previous peak in summer 2018.

"Higher jet fuel prices will contribute to higher domestic airfare," said Adit Damodaran, an economist at Hopper, the travel booking app. "Price increases at this rate (with the exception of recovery from pandemic lows) have been very uncommon in the past five years."

Despite this increase in fuel prices this summer, July 2021 is also when we saw a slight dip in domestic airfares, according to Hopper data showing that airfares actually decreased in price for a three-month period starting in July, before increasing by 5% in October.

Although domestic airfare is currently averaging $244 round-trip in October 2021, it's still a 17% decrease from summer highs of $295 round-trip in June, says Damodaran, who expects any deals we're seeing right now to fade as we approach November and December.

"The current $244 round-trip figure represents a 4% increase over airfare in October 2020, and a 15% decrease from airfare in October 2019," said Damodaran. "Similar to prior years, we’re expecting holiday airfare to match summer prices, with December prices around $290 round-trip, amounting to an 18% increase in domestic airfare over the next two months."

"Searches for domestic holiday travel are up 105% in the last month alone — compared to just 51% over the same period in 2020," said the economist. "2021 holiday search demand is currently trending more in-step with 2019 search demand, which suggests there is still much pent-up demand for holiday travel."

On top of expected seasonal demand, it seems likely that a seven-year high in jet fuel prices would signal to travelers to expect increased airfares, which airlines have already begun echoing.

Booking patterns for holiday flights have been fairly consistent over the years. But, for this season, all bets are off as the COVID-19 pandemic introduces variables unlike any in recent memory.

"Another coronavirus surge could keep prices down, allowing travelers to book flights much closer to the holiday season," says Rick Seaney, chief innovations officer at 3 Victors, a travel data company. "Making flight reservations can be tricky. Booking early — up to six weeks before departure — usually ensures that travelers get the lowest prices."

Regardless of whether we see additional COVID-19 mutants this fall, the consensus seems to be that an uptick in travel will continue to push fares higher.

"Fares are most definitely going to rise as demand returns," said Brett Snyder, a travel analyst and author of the Cranky Flier aviation and travel site. "The operational issues will force airlines to keep supply lower than they might want, and with demand increasing as the delta variant impact falls away, fares will go up."