Articles
David Slotnick is a senior aviation business reporter at TPG. He covers anything and everything to do with the business of running an airline.
Follow
Oct. 13, 2021
•
8 min read 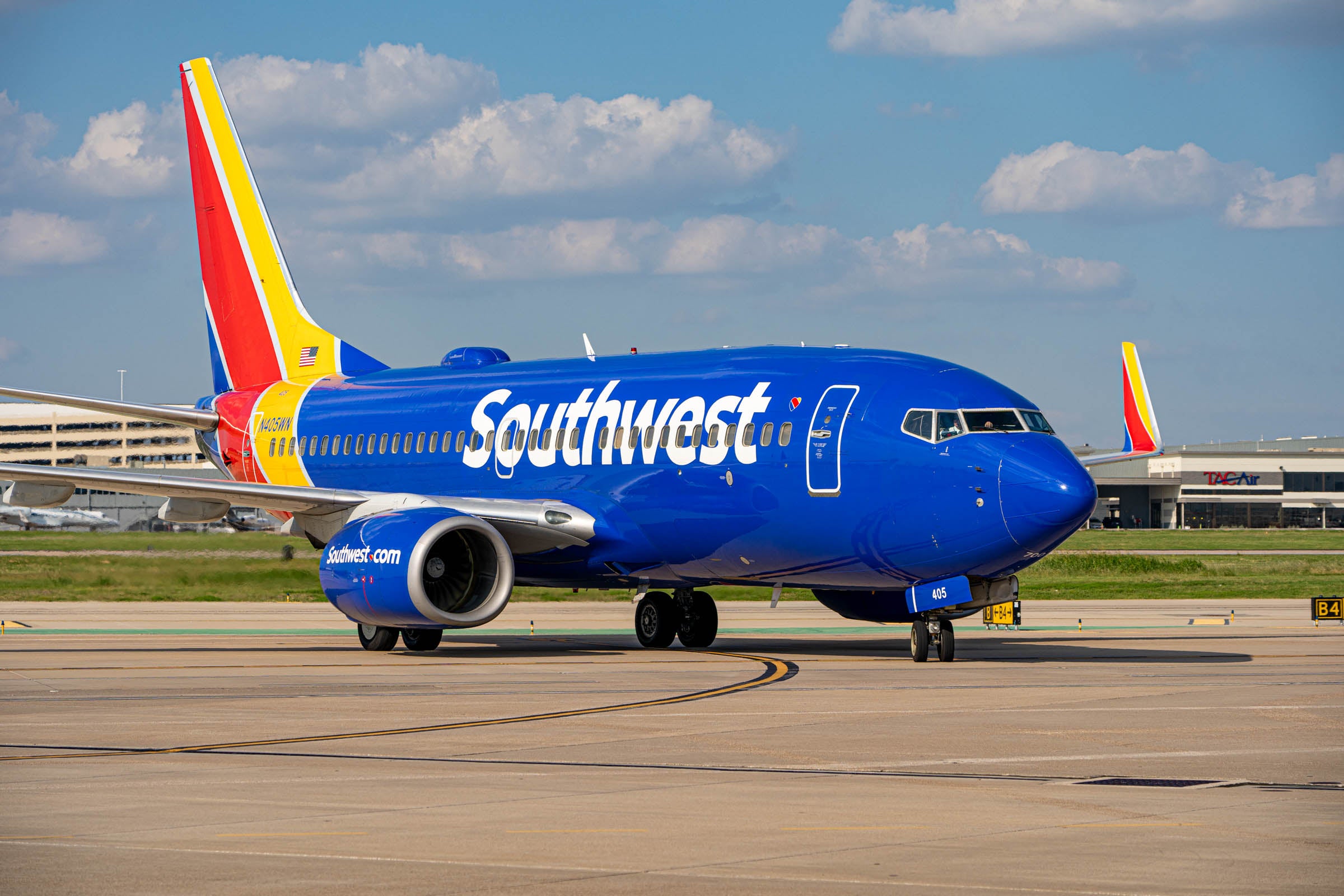 ‘Flat out not true’: Incoming Southwest CEO denies pilot walkout rumors to TPG
This post contains references to products from one or more of our advertisers. We may receive compensation when you click on links to those products. Terms apply to the offers listed on this page. For an explanation of our Advertising Policy, visit this page.

Southwest Airlines canceled more than 1,800 flights over the weekend as it suffered a disastrous operational meltdown.

A cascading effect caused by a convergence of several different issues created a perfect storm, leading to chaos and leaving thousands of passengers stranded around the U.S., Central America and the Caribbean.

By Tuesday, operations were largely back under control, with just 93 cancellations, or 2% of the airline's schedule for the day, down from 435, or 12% of the schedule, on Monday.

Still, reports quickly spread this during the weekend claiming that Southwest pilots and other staffers were walking off the job in a "sick-out" to protest the looming vaccination mandate, which Southwest plans to implement in order to comply with the federal executive order requiring all employees at large businesses and federal contractors to be vaccinated.

Despite evidence of other causes for the meltdown, as well as evidence of a coordinated disinformation campaign pushing the walk-off narrative, high-profile pundits and politicians elevated and promoted the rumors, including Sen. Ted Cruz of Texas and former president Donald Trump.

Bob Jordan, Southwest's incoming CEO, said that there was absolutely no truth to the rumors.

"There was not a walkout this weekend," Jordan said to TPG in a phone interview Tuesday evening. "It's just flat out not true."

Jordan, who will replace retiring Gary Kelly as Southwest's CEO early next year, said that there was no surge in pilots or other employees calling out sick, nor absenteeism, despite reports claiming that. Contrary, some employees came in on days off to try and help get the network back under control.

"Nothing like that is true," Jordan said. "We didn't see sick leave beyond normal. In fact, we saw our crews picking up open time to the extent that they could."

"Our pilots and flight attendants were picking up open trips."

The Southwest Airline Pilots Association (SWAPA), the union representing pilots at the airline, similarly denied there was a job action — official or otherwise.

“The sick call rate over the weekend was no different than it has been since June and the pilots actually picked up open flying as well,” Amy Robinson, a spokesperson for SWAPA, told TPG on Monday.

Jordan said he was frustrated to see the other narrative continue to be pushed.

"When these issues happen, it's tough on our customers and on our employees," Jordan said. "They're terrific, and if anything, they were heroic through the weekend, assisting each other and assisting our customers" as they tried to get the problem under control, he added."

"To imply otherwise, or to imply that they were involved with this, is one, not truthful, and two, it's disrespectful to how hard they work all the time."

Jordan said that the cause of the delay was a combination of issues including weather issues in Florida and air traffic control issues on Friday.

One of those issues was a U.S. Navy training exercise off the east coast of Florida complicated air traffic control routings and procedures.

While the storms and the airspace issues caused by the training exercise would normally be manageable, the Jacksonville air traffic control facility — which controls airspace in much of the Southeast — experienced a staffing shortage Friday which compounded the issue.

From the summer: What’s going on with all of those cancellations at American Airlines

The FAA denied that, however.

"Flight delays and cancellations occurred for a few hours Friday afternoon due to widespread severe weather, military training, and limited staffing in one area of the Jacksonville Air Route Traffic Control Center," a spokesperson said in a statement. "Some airlines continue to experience scheduling challenges due to aircraft and crews being out of place."

A source at the FAA familiar with the situation said there was nothing out of the ordinary with what was described as a brief staffing shortage. Such short staffing is relatively common at air traffic control centers around the country.

The common question, then, is why Southwest was affected so much worse than other carriers.

"The big issue is that Florida is roughly 15% of our trips, but on any given day, upwards of 50% of our aircraft lines flow through Florida," Jordan told TPG. "You've got all those lines that just stopped in Florida, so you've got a lot of aircraft caught up in that," he said.

While there were a lot of crews based in Orlando at the time the delays started, Jordan said, delays meant it was impossible to move them elsewhere in Florida and the rest of the country where they were needed.

"So you begin to wake back up, and you can move traffic in Florida again, aircraft and crews are all out of position," Jordan said. "It can take a lot of cancellations and days to get all of those pieces back together, which is what we experienced."

Jordan said it was particularly the line-flow system that Southwest uses as part of a point-to-point network that made it harder for Southwest to recover than other airlines with heavy exposure in Florida, such as American, which has a hub in Miami as part of its hub-and-spoke network.

"We're not hub and spoke, and we do very little out-and-back," Jordan said. "So when you stop a line, you're stopping a line where the aircraft is attempting to flow across the country."

The operational issue — and the reasons Jordan listed for Southwest being the only airline impacted — bore remarkable similarities to the summer meltdown experienced by Spirit Airlines in August, when the airline was forced to cancel more than 2,000 flights as it tried to reset its network following a series of disruptions.

In that case, as in the current Southwest incident, it was the tight staffing with no slack, coupled with a chain-reaction of events, and a point-to-point network making it difficult to get operations back on track, that caused the airline to suffer the catastrophic disruption while other airlines were hardly affected.

Southwest has operated with little margin for error all summer as it filled its schedule to capacity to try and take advantage of returning travel demand, despite having lost about 630 pilots to buyouts and early retirements during the early days of the pandemic — about 6% to 7% of its total pilot workforce, as pointed out by Jon Ostrower of The Air Current.

That’s caused Southwest to face delays all summer, leaving it particularly vulnerable to disruptions, such as the storms Friday that helped lead to the latest schedule crisis at Southwest.

"The airline business is complicated, and you've got all these pieces moving around, and they count on continuing to move," Jordan said. "When they stop moving, it just causes you a real problem."

For customers who may have doubts about booking travel on Southwest after the difficult summer and this weekend's catastrophe, Jordan asked them to give the airline a chance.

"We had a tough summer. There were a lot of things that were happening, but the No. 1 thing is we just weren't as staffed as we needed to be," he said. "You just have a lower level of margin [for error], especially crew margin, and so if anything occurs, it makes it tougher and you run a lower on-time performance."

Jordan said the airline has worked to add staff, and is hiring 5,000 employees over the course of the fall.

"Before this weekend, the operation was running well, and we were seeing a lot of improvement from the summer. This was really a unique event."

Jordan said that the airline had trimmed its schedule slightly to build in more of a margin for error, and while he expects the airline to have enough staff to avoid reducing its holiday schedule, he said they would continue to reassess.

Featured image by DAVID SLOTNICK/THE POINTS GUY
Editorial disclaimer: Opinions expressed here are the author’s alone, not those of any bank, credit card issuer, airline or hotel chain, and have not been reviewed, approved or otherwise endorsed by any of these entities.