10 active volcanoes to see in your lifetime 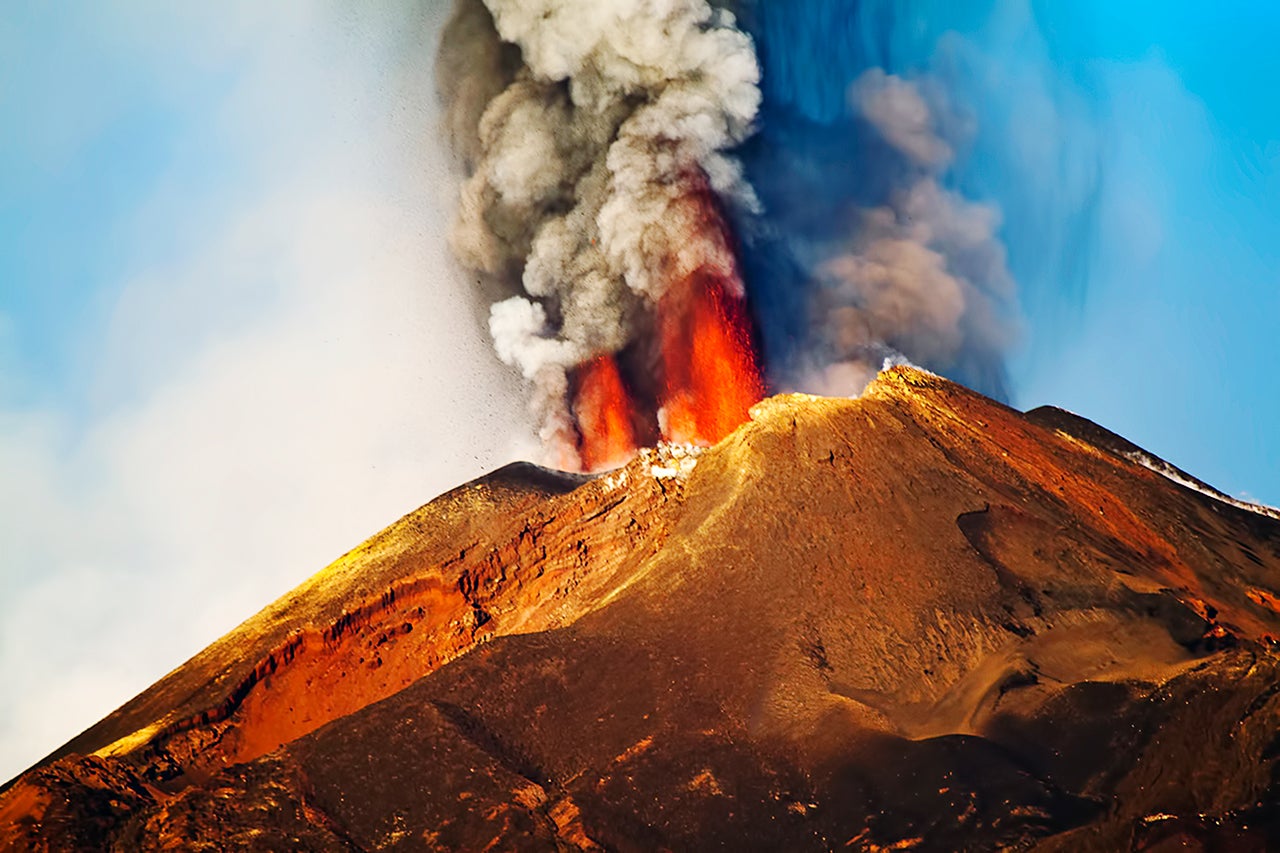 The world is circled by active volcanoes that offer spectacular glimpses of the raw majesty of the earth -- from a safe distance, of course. Here are 10 of the most awe-inspiring volcanoes on the planet.

Please note that any active volcano presents extreme dangers even when dormant and that visitors should not attempt to climb them without thoroughly researching and preparing beforehand. (A dormant volcano is still considered active even if it's not technically erupting at the moment. It's not extinct.)

When Eyjafjallajökull erupted in 2010, almost all of Europe suffered the consequences -- notably a far-reaching cloud of ash that led to thousands of travelers being stranded in Europe for six days. The glacier-topped mountain stands over 5,400 feet tall and is part of an area that's considered particularly active and unpredictable. It's a popular destination for helicopter and Jeep tours and experienced hikers can get a grand view from a nearby ridge. And no, you are not alone in wondering how to pronounce it.

Probably history's most famous volcano, Vesuvius has become permanently etched in people's minds as the natural disaster that buried the Roman city of Pompeii in ash and killed thousands, including the philosopher and statesman Pliny the Elder. Today it's often referred to as the most dangerous volcano in the world not only because of its notably explosive eruptions but because of the three million or so people who live in and around Naples, including 600,000 who live in the so-called "red zone" immediately around Vesuvius itself. It's been dormant since 1944 but some experts fear that's merely because the 4,200-foot giant is building up to a truly devastating eruption. Nevertheless, you can hike to the summit and peer into the crater, from which steam still visibly rises.

This 11,000-foot volcano on the eastern coast of Sicily erupted as recently as March 2017 and is known for occasionally emitting rare volcanic smoke rings. Its power has fueled legends since ancient times, and it was once believed to house the forge of the god Hephaestus and serve as a prison for titanic monsters. Today, though, it's home to ski resorts and a thriving tourist industry and is a popular site for hikes and bus and 4x4 tours.

Merapi is Indonesia's most active volcano. Often covered in its own smoke, Mount Merapi killed hundreds and displaced hundreds of thousands when it erupted in 2010. Fearing a repeat of that disaster, the government has prohibited settlement around the base and a small army of experts continues to monitor it carefully. It's also central to age-old Javanese myths and the 9,600-foot cone is supposed to be the palace of the kings and queens of the spirit kingdom. Though the summit is officially closed to tourists, hikers still make the ascent.

One of Africa's most active volcanoes and standing over 11,000 feet, Nyiragongo is known for having one of the largest lava lakes in the world. It last erupted in 2002, when it killed 147, but is still actively monitored by scientists as an ongoing potential threat to the surrounding area. The volcano lies within Virunga National Park and is accessible, with a paid tourist permit, to visitors who often camp out at night on the summit to bask in the glow of the lava in the crater.

Read more: How to take better photos when traveling

At nearly 8,400 feet, Pacaya towers over Pacaya National Park and is just 19 miles from Guatemala City. It's been nearly continuously active for centuries and is known for showering the city of Antigua in ash and spilling out rivers of lava. It's been erupting since 2013 and is easily visible throughout the park.

Arguably the best reason to leave Costa Rica's beaches for its interior, Arenal rises nearly 5,400 feet over the region's emerald rainforests. It completely destroyed the nearby town of Tabacon when it erupted in 1968, killing 78, but has been considered dormant since 2010. Tabacon has since reinvented itself as a spa town, making use of the volcanically heated spring waters, and the entire area around the volcano has become a popular tourist destination, attracting visitors who come for the diverse wildlife, excellent bird watching, outdoor activities and, of course, Arenal itself. Locals will tell you the best view of Arenal is from the top of neighboring Mount Chato, a somewhat strenuous climb that leads to a hidden crater lake where the daring can swim under the shadow of the volcano.

The most well-known of the Big Island's volcanoes is so active that it has a name that actually means "spewing" in Hawaiian. It rises to just under 4,100 feet and is a shield volcano rather than a classic conical or dome-shaped volcano, thanks to its lava, which is more fluid and easily flowing than usual. Kilauea and its four nearby siblings are considered to be the earthly form of the creator goddess Pele and have been popular with visitors to the islands, who now get close-up views by foot, boat or helicopter, for almost 200 years.

Lying on Tanna Island in this South Pacific nation, and measuring a relatively dwarfish 1,200 feet, Mount Yasur has been continuously active at least since Captain James Cook spotted it in 1774, spitting out ash or lava several times an hour and earning the nickname "Lighthouse of the Pacific". It's been especially active since 2013, and visitors are warned to be very careful these days. Still, climbing and flying tours are available and the volcano is a top tourist destination in Vanuatu.

At 9,380-foot, Villarrica is especially scenic because it rises majestically above the eponymous lake, but residents and tourists were treated to an even more dazzling and frightening spectacle when the volcano erupted in 2015, throwing up a brilliant column of lava that was visible for miles. The Mapuche people call it by another name, Rucapillan, or House of Pillan, referring to its benevolent spirits that live in the earth. Though there's a ski resort on its northern slope and tourists continue to hike and fly over it, one group of climbers was scared off by a sudden lava spurt at the crater in early 2017.

Visiting volcanoes can be thrilling -- but also dangerous. So before planning a volcanic adventure it's very important to keep on top of each country or region's government website for advice and regulations. Hire a guide, don't go off the beaten track too much and you will enjoy some truly spectacular sights!