6 Wild Things We Learned (And Saw!) at TSA Headquarters 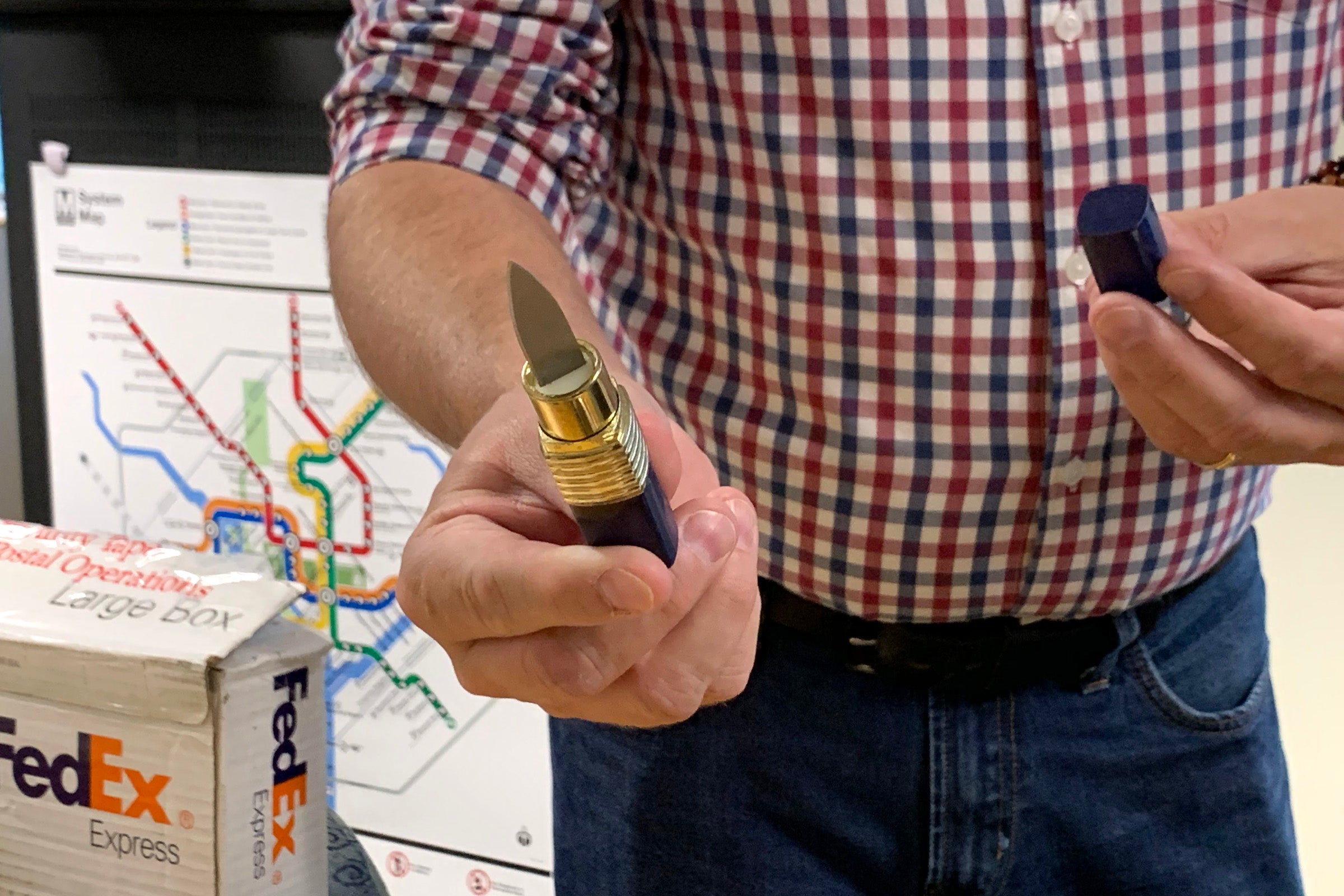 With some 50,000 employees positioned throughout the United States, the Transportation Security Administration's workforce serves a critical role, but an unenviable one. It's a largely thankless job, though employees did receive some much-deserved recognition during this year's government shutdown.

As one of the most visible federal government agencies, the TSA is no stranger to the press. But it is unusual to land seemingly unrestricted access to some of the agency's most knowledgable staffers, so TPG's social media lead Caitlin Riddell and I didn't hesitate to book a day trip from NYC to Washington, D.C. to check out some of the TSA's greatest checkpoint finds.

We had a chance to sit down with David Johnston, a career federal government employee now charged with managing the TSA's social media efforts. While many agencies have a social presence, the TSA's accounts feel a bit less formal — they play a hybrid role of sorts, serving to entertain as well as inform.

Johnston provided some insight into what's made the TSA's accounts so successful — the agency's Instagram is just days away from hitting 1,000,000 followers. "We are very curious about our fellow man," Johnston explained. "What is that person thinking when they brought on the giant bag of beef jerky onto the plane, or they brought the chili dog. We're curious people by nature, so in a way, it almost gives you a snapshot or window into what that person has packed in their luggage, and what they have decided is okay to bring along on a flight."

While Johnston helps to represent the TSA within the travel industry, including among airline social media managers and other government agencies, his role isn't quite as visible as that of his former colleague Curtis Robert Burns — aka "Blogger Bob" — who sadly passed away unexpectedly in 2018.

You really can't reference the TSA's social media success without acknowledging Burns, a TSA Officer turned social media pro who's credited with building the @TSA we know and love today.

The late "Blogger Bob" is still making his mark throughout the agency, too — especially with the social media team. "What would Bob think about that? Would he find it funny?" Johnston asks himself when crafting social media copy or determining whether or not to engage with certain "social media holidays," like the recent #NationalDogDay — an obvious fit for the TSA, which maintains its own K9 team.

I walked away with a far better understanding of how the agency operates — especially when it comes to handling contraband, and social media promotion. Here are some of the more interesting "finds" from TSA's Arlington, Virginia HQ:

1. The TSA social team aims to educate, not just entertain

I really get a kick out of the TSA's Instagram feed, and I'm willing to bet you do, too. But as wild and entertaining as some of the content can be, the agency's ultimate goal is to help educate travelers, so they know what to expect — and what can and can't be brought through a checkpoint — before they head to the airport.

"We want to make it where we're being educational," Johnston said. "It's not just about posting shocking photographs on there, it has to tie back to what are we trying to educate travelers about, what are we really seeing and I think that we do a good job of balancing education and entertainment when it comes to what content we're putting out there."

In many cases, travelers don't even realize the items they're attempting to bring through aren't allowed.

"There are firearms that show up at airports everyday, there are countless numbers of pocket knives and things like that," Johnston said. "We could fill our Instagram feed with that, but while we want to emphasize that message, there are a lot of items that people might not think about being prohibited, or being a potentially dangerous item — an engraved ax that someone gives their spouse for a wedding present, a snake that was packed in someone's suitcase and slithered out — it's these items that give us a lot to talk about on Instagram."

2. The most interesting items come through international hubs

This one might seem obvious to frequent international flyers, but the majority of unusual items pass through the largest long-haul hubs, like Los Angeles International (LAX) or New York-JFK.

According to Johnston, "Your California or your New York airports, I think we see a lot of really unique items there. Part of it's because of volume, but part of it is just their proximity to international flights and people coming through with items that maybe they're taking overseas as a souvenir, or maybe they're bringing back from a trip."

Supervisors from airports around the US are tasked with collecting and submitting photos of collected contraband, the majority of which has been surrendered voluntarily by travelers more interested in catching their flights than keeping unusual novelty items and other banned goods.

As Johnston explained, "Even though we get a lot more volume from certain airports, someplace like the middle of nowhere Alaska sends us the bag of [moose] poop photograph, we get an unusual knife or something from Arkansas. It is very democratic when it comes to unusual items — all 50 states get represented."

3. The TSA's social team works closely with airports and airlines

As Johnston explains, the airport experience tends to "get lumped together" — while different companies and government agencies are responsible for smaller components of the larger operation, passengers don't often distinguish between entities.

"I think it's really important that we talk to the airlines and the airports and be able to make sure we're on the same page in really understanding how our individual components fit in that experience that a person has, so that we're not letting anything slide between the cracks that could be TSA's role or responsibility."

"When we started with Ask TSA four years ago, at the time, about 25% of online content where people were mentioning TSA was negative, and now it's less than 5%. People know that we're involved, we're engaged and it gives us a legitimacy that we're in these conversations."

While the TSA's fun Instagram has certainly helped lighten the mood online, the agency's "Ask TSA" staffers deserve a lot of the credit, too. Most of the 10 or so employees tasked with addressing individual questions via social media have worked at airport checkpoints, so they're better equipped to address inquiries and complaints.

"You're not going to win every person who has a complaint, but when we let people know that we are trying to help, and that we don't want to be some faceless government organization, it wins us a lot of supporters."

Off and on, the TSA has been pestering travelers about changing ID requirements for nearly four years now, though the agency has been making a far stronger push as of late, just as it did back in 2017 — before the enforcement deadline was pushed back to October 1, 2020. Now, with that federally mandated date finally approaching, the agency has ramped up its awareness campaign yet again. It's such a priority, in fact, that we wrote up a dedicated post right here.

Think the TSA's K9 team is looking to make a bust? "They're not," Johnston said. "They're looking for explosive items."

There are a number of other misconceptions, too — especially when it comes to items that are allowed through a checkpoint. "Most people don't understand that the majority of household items are good to go," Johnston added. "We get lots of questions about food — trail mix, sandwiches, chips, candy — and all of those items are good to fly with."

At the end of the day, many travelers don't intend to take weapons or other contraband through a checkpoint — they simply forget that they've brought them along.

"So many people show up at checkpoints with firearms because they had put it in their bag and had forgotten about it, or they meant to take it out and they never did," Johnston said. "The most important thing, that would get people out of a lot of trouble, is double checking what you've got in your possessions."

If it isn't already clear, the TSA isn't out to get you, and most officers don't go to work intending to make your travel experience miserable. "At the end of the day, we want people to have a good experience in the airport, we want them to get there safely," Johnston said. "If we've done that, we've done our jobs."