5 Reasons Every AvGeek Should Visit the Delta Flight Museum

Articles
Darren Murph holds a Guinness World Record as the planet's most prolific professional blogger. He's an explorer at heart, having traversed nearly 50 countries and all 50 US states. He's flown over one million miles on Delta alone, and serves as a senior writer at TPG.
Follow
Oct. 23, 2018
•
12 min read 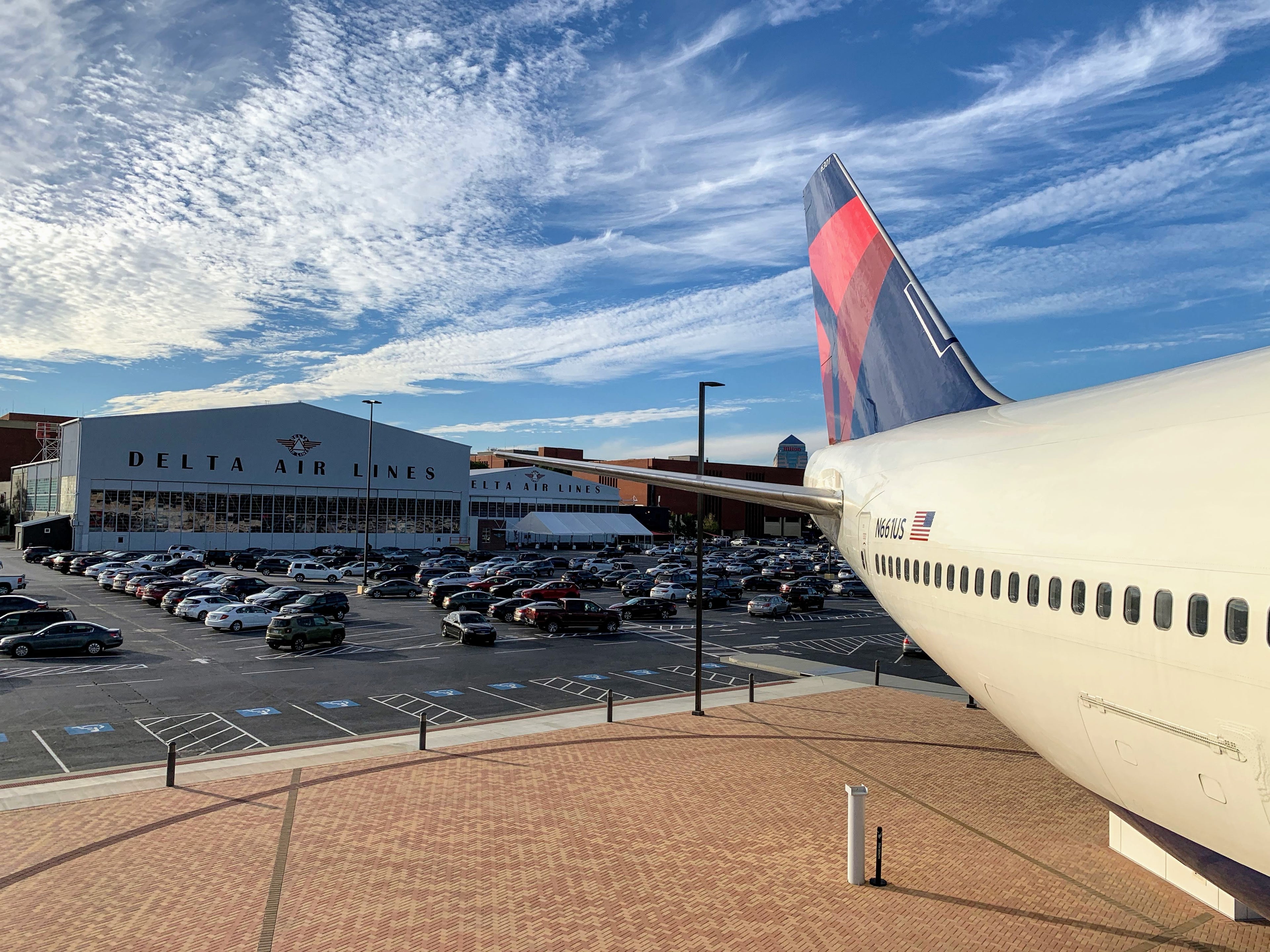 The Delta Flight Museum has been a mainstay in any roundup of museums that AvGeeks simply have to see, but only recently has it become a destination in its own right. In fact, air conditioning was just installed throughout in 2014, which makes the visit a lot more comfortable during Georgia summers. Located right beside a runway at the world's busiest airport, Hartsfield-Jackson Atlanta International (ATL), the museum is a nonprofit entity dedicated to preserving the history of what we know today as Delta Air Lines.

It's a massive facility spread across two original airport hangars from the 1940s — part of the original Atlanta Municipal Airport — and I recently had a chance to explore every square inch. The long and short of it? It's a must-see, and I've rounded up five of my favorite elements below.

Delta's Queen of the Skies, the Boeing 747, had a farewell tour for the record books. TPG Editor-at-Large Zach Honig was onboard one of the 747's final journeys, and I personally flew on the very ship that is now on display as the largest and most captivating element of the entire Delta Flight Museum. N661US made its final run between Honolulu (HNL) and ATL (ATL) in September of 2015, and it shuttled me along the same airspace just days prior.

You can have a seat in the Delta One lie-flats that were left onboard, including the one at the nose ("in front of the captain") and upstairs in the upper deck.

The upper deck transforms as a viewing platform from the forward cabin back, where clear paneling has been installed to give you a true look at the inner workings of an airliner cabin.

As you walk where carpet once was, Delta has left everything in place below. The amount of precision in cabling and tubing, elements that most passengers don't even consider, is mind-blowing.

As it should, the interior of this majestic machine doubles as an event space, with clear paneling above to showcase what wraps around a cabin full of souls as a jet flies from one place to another. AvGeek wedding, anyone?

Even the lavatories are open for viewing, with a fresh bottle of soap and new rolls of toilet paper that no one will ever use. So fresh, so clean.

The interior of a Boeing 747-400 is so huge, Delta is able to stand up an entire museum in its interior.

Sections of the Main Cabin were left installed, too.

Crawling (er, walking) underneath of the Queen of the Skies gives great perspective on its sheer size.

It's one thing to see it from inside of an airport, but it's another to climb inside this gargantuan jet engine. The complexity of these mechanical wonders brings about a new appreciation for modern air travel.

It barely fits, but it fits. The airliner known as "The Spirit of Delta" is expertly restored, and you're able to walk inside and remember what it was like to fly one of Delta's best jets in the mid-2000s. The story behind the plane is remarkable, and frankly, embodies the Southern hospitality that Delta prides itself on.

Led by three Delta flight attendants in the early 1980s, an employee fundraising drive during a tough time for the aviation industry as a whole raised $30 million — enough to buy a Boeing 767-200. It flew as a point of Delta pride for over 23 years, and was retired in 2006 after flying north of 70,000 hours.

One thing that hasn't changed much since The Spirit of Delta last flew in 2006? The look and feel of the galley.

Sports fans will appreciate the collaboration elements showcasing the love from Delta to its local franchises, such as the Atlanta Braves baseball club and the Atlanta Falcons football squad.

It's insane to think how far in-flight entertainment has come. We've moved from overhead projectors (!) in 2006 to Delta Studio in 2018.

In-seat phones and projector screens. The pinnacle of flying just a few years back.

The spacious confines of a Boeing 767-200 cockpit.

The shine on the airliner's belly is intense (and beautiful).

There's Much to Learn About how Delta Became Delta

Did you know that Delta began as a crop-dusting operation? Or that its first flight routes didn't even include Atlanta, the city it now calls home? Even if you've flown a million miles on the Delta we know today, there's almost certainly something about its past that'll be new for you.

The museum also does a fantastic job of spotlighting the people that have defined the airline. Delta's founder, C. E. Woolman, recognized that airlines could pretty easily replicate one's fleet and route network, which leaves precious little room for differentiation. He noted that "All airlines are alike; only people make them different." You'll find lots of elements such as these throughout, and it paints a realistic picture of how the company's employee network strives to differentiate today.

Every airline has days it'd prefer to forget, from IT meltdowns to sluggish restarts after a major weather event, but Delta is hinging its future success on how it treats others. A good chunk of the experience focuses on this, rather than the metal you think of by default when you see the Delta logo.

You Can Hop in a Boeing 737 Flight Simulator

It's relatively easy to hop in a flight simulator used to train actual pilots that fly actual Delta jets. You just need a few million bucks and a climate-controlled garage. If, however, that doesn't sound easy enough, there's one other way that I discovered during my tour.

Once Boeing's 737-200 was fully retired from Delta's fleet, the simulator used for pilot training on that specific aircraft was moved to the Delta Flight Museum. This is no mock-up. This is a real-deal 737 full motion flight sim that past Delta pilots have sat in and operated.

You can reserve an hourlong session for $425, and it's worth noting that the experience can hold up to four AvGeeks at once.

It's Doable With a Long Layover at ATL

One of the remarkable aspects of the museum is its location. It's a stone's throw from ATL, enabling you to Uber or Lyft over during a layover in just a few minutes. Pricing ranges from $0 for budding pilots ages 0 to 4 to $15 for adults between 18 and 64. And yes, that sum includes access to the Boeing 747-400 sitting outside.

Delta's network of Sky Clubs within its home base in Atlanta is impressive, and the newest club at the center of the B concourse is particularly epic for plane spotting. That said, there's no better way to spend a couple of hours than soaking up mountains of AvGeek history nearby. Just keep in mind that the Delta Flight Museum is closed each Wednesday, and it keeps a running list of temporary exhibitor closures on its website – for example, the Boeing 747-400 is occasionally rented out, so you'll want to make sure it's open when you visit.

One of the more understated reasons to visit is the museum's ability to instill a deeper appreciation for aviation as a whole. It wasn't that long ago that the most advanced planes in the world were topping out at 70mph, and business class cabins were outfitted with top-of-the-line dining room chairs.

It's easy to kvetch and conclude that flying just ain't what it used to be when you're staring at a multi-hour delay due to a mechanical issue, but the truth is that air travel is a marvel. My hunch is that you'll have a little more patience, a little more understanding and a little more respect for just how miraculous flying is once you've toured this museum.

It's also a wonderful place to bring the family. There is perhaps no easier way to plant a seed of imagination, to provide a glimpse at what a career in engineering could bring, than a tour of the Delta Flight Museum. It's the kind of place that will leave an indelible mark on young, impressionable minds, which is exactly what we need to keep the industry that we love moving forward.