Why Guam should be your next destination rather than a layover 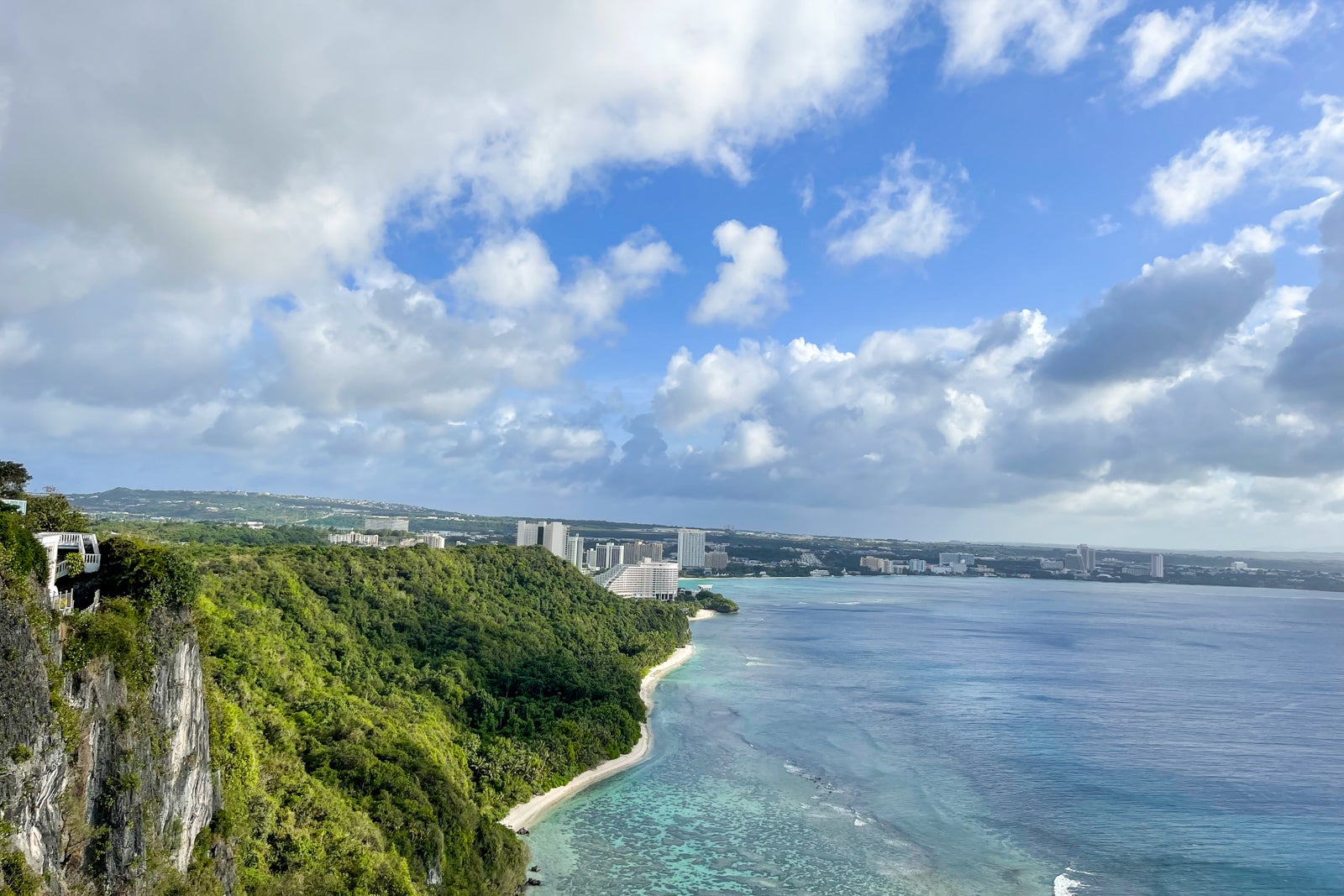 With the world seeming to reopen a little bit more each passing day, travelers once again have more and more choices for where to take their next trip.

As an avid traveler myself, being able to visit international destinations again is welcome news.

However, my comfort level as a traveler during the era of COVID-19 isn't quite back to where it was pre-pandemic. The fear of getting COVID-19 while abroad has kept me from venturing outside the United States.

Related: Travel is back in a big way as COVID-19 appears to be entering endemic stage; why I'm still nervous

So, what are my options?

Late last year, I started to look at places to visit that would offer me some distance from home without stepping foot off American soil. That's when I stumbled upon Guam, a small U.S. territory in the Pacific Ocean.

Curious to see where "America's day begins," I traveled to one of the most westernmost points of the U.S. to check out the tiny island. Here's why Guam is more than just a spot for a layover between Hawaii and Asia — it's a destination you should consider planning your entire trip around.

Guam is easier to get to than you think

While there's no quick way to get to Guam from the continental U.S., there are several flight options from other places including Hawaii and various Asian countries. So if you're traveling around the region already, Guam can be a great gateway to other major destinations in Asia and the Pacific.

The pandemic has reduced the number of options to get to Guam for now, but you still have some choices.

Korean Air operates the 4.5-hour flight to Guam (GUM) from Seoul (ICN) daily, and United flies there daily from Tokyo (NRT) in just under four hours. Round-trip airfares tend to start at around $500.

Both United and Philippine Airlines operate four-hour flights to Manila (MNL), which start at around $600 round trip.

From the continental U.S., meanwhile, your best bet is to fly to Honolulu (HNL) and then take United's daily non-stop from there, which takes just under eight hours (and around seven on the return). It starts at $2,262 round trip for the next few months.

As a Filipino American, Guam holds special significance to me.

While I was born and raised in California, Guam has long been on my radar, as I grew up hearing passing references to the island by members of my family and various friends born there.

Due to its location in the Pacific Ocean, several countries have eyed the 212-square-mile island as a strategic point, resulting in its colonization by the Spanish from the 1500s to the 1800s and occupation by the Japanese during World War II. After it was reclaimed by the U.S. in the 1940s, it was officially deemed a U.S. territory in 1950.

Guam's ties to various countries over the years resulted in a mix of cultural influences and a rich military history, the latter of which continues to this day in Santa Rita and Yigo, two communities with U.S. military bases.

The military presence was certainly noticeable during my visit, but it was the diverse group of people who call the island home that I enjoyed meeting and learning more about.

You can't go anywhere in Guam without hearing "Hafa Adai," which means hello in Chamorro, the language spoken by the majority of Guam's residents. No matter whom you strike up a conversation with, you'll find yourself feeling welcome, as if you're hanging out with a friend at a community party.

You could easily spend a large chunk of your trip learning about Guam from those who live on the island, but to supplement your interactions, you'll want to check out the Guam Museum. Here, you can find out more about the Chamorro people and Guam's history.

Keep in mind that you'll need a reservation (plus proof of vaccination and to pay the $3 per person admission fee) to enter the museum.

The real highlight of my trip, though, was seeing some of the brands and stores found in the Philippines, including SM Island, a major department store selling everything from traditional clothing to Philippine snacks.

I was equally excited to hear local Filipinos (who are the second-largest ethnic group in Guam) speak my family's language of Kapampangan. Having the chance to practice my language skills with my fellow Kababayans (or countrymen), especially since many of them hailed from Pampanga, the province where members of my family are from, was incredibly meaningful.

If you're a foodie, then you'll love Guam's array of cuisines, with many dishes served in large portions.

There are weekly food truck night markets throughout the island that give residents and visitors alike a taste of the world in a community setting.

Offering everything from Chamorro to Filipino to Hawaiian staples, Guam provides plenty of options for satiating your appetite.

One of my favorite foods I tried was tinatak, a Chamorro dish made of ground beef and coconut milk. It had the right amount of salt and sweetness to melt in your mouth and leave you wanting more.

I also enjoyed sampling the wide assortment of barbecue in Guam. The island's variation features pork, beef, chicken and fish marinated with ingredients like garlic, onion and soy sauce and grilled until the meat is charred. Dishes typically come with salad and Chamorro red rice, which gets its vibrant hue from achiote seeds.

Beautiful beaches are plentiful on Guam

Many Pacific islands boast gorgeous stretches of sand. What makes Guam's beaches so special, though, is that many of its beaches offer calm waters thanks to the protection of offshore reefs.

I loved watching Tumon Bay's clear, turquoise water barely hit the shore while lounging on one of several white sand beaches that fringe it.

I highly recommend the shores by Tumon Bay, but if you're looking for a few more options, others worth checking out include Ritidian Point, Talofofo Beach, Gun Beach and Matapang Beach Park.

Regardless of which beach you choose, you'll likely find both locals and visitors sunbathing and enjoying a nap. It's also not uncommon to spot some folks snorkeling and swimming in the Pacific.

Try to time your beach visit around dawn or dusk to catch the sun rising above or dipping below the water's surface. Guam's beach sunrises and sunsets were absolutely breathtaking during my trip, as they featured an assortment of pastel colors in every direction.

Can't-miss points of interest on Guam

Despite its small size, Guam is home to some unique attractions and sights.

One of the most iconic spots in Guam, Two Lovers Point (also known as Puntan Dos Amantes) commemorates the legend of two star-crossed lovers who reportedly fell to their death here to avoid living in a world where they'd be forced to live apart.

At the site, you'll find a statue and murals depicting the two lovers, a lookout with jaw-dropping views and a lock wall where you can fasten a lock with your partner as a symbol of your love.

While there's no admission fee, know that there are a couple of additional charges you may incur during your visit. To get a better view of Tumon Bay from Lookout Point, you'll need to pay $3. You can also buy a lock to attach to the Heart Lock Wall if you don't bring one with you.

For an extra dose of Guam's culture, plus an adrenaline rush, be sure to visit the Valley of the Latte Adventure Park. This property offers an immersive experience around the Chamorro culture.

During the river boat tour, which costs $110 and includes lunch, you'll explore the Talofofo and Ugum rivers, visit ancient latte sites (where cup-shaped stone pillars that supported traditional homes can still be found), tour a botanical garden, head to an animal sanctuary and watch traditional activities like basket weaving and building a fire.

My favorite part of this experience was seeing the carabao (water buffalo), which can be found all over the Philippines. It was great to view this gentle beast up close again during my time in Guam.

While some people may not dream of visiting Guam like they do more popular destinations in Asia and the Pacific, the island's beautiful setting, tasty cuisine, noteworthy sites and warm people make it a locale to consider for your next vacation.

As a traveler who craves an authentic experience on the road, but has had limited opportunities to embrace other cultures during the pandemic, I loved being able to venture thousands of miles away from home without leaving American soil.

Although a ticket to this remote paradise wasn't cheap, the low prices I found on the island and the memories I created more than justified the trip, satisfying my pent-up wanderlust from years spent confined to the continental U.S.

Experiencing both a feeling of familiarity and a taste of an entirely new world all at once is something I'll most certainly never forget.

Related stories
First, Club Suite and the rest: Flying the British Airways 777 in all 4 cabins
10 best hotels to see the northern lights
You won’t want to miss New York City’s newest immersive art space
New welcome offers: Earn up to 150,000 points on these Marriott Bonvoy credit cards
Featured photo by (Photo by Leezel Tanglao/The Points Guy)
Editorial disclaimer: Opinions expressed here are the author’s alone, not those of any bank, credit card issuer, airline or hotel chain, and have not been reviewed, approved or otherwise endorsed by any of these entities.