The weirdest things you've done to earn miles and points 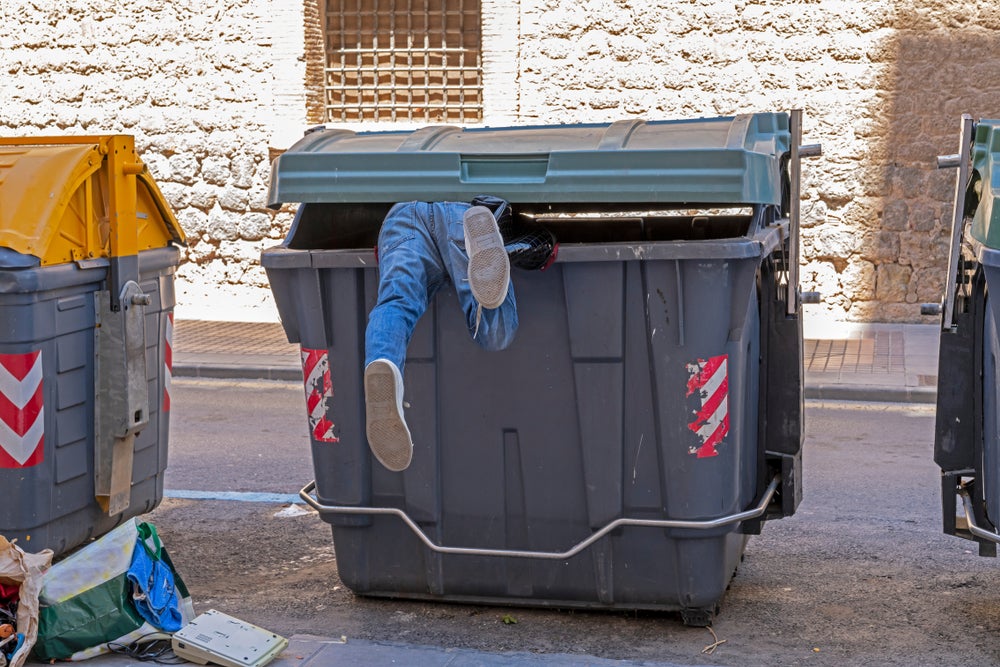 You can earn airline miles the old-fashioned way by flying, or with credit card or shopping online. But really, that's just the very tip of the iceberg. The pursuit of points and miles can take you to the dumpster, to a hair-loss consultation, to the bank and back again.

To find some of the weirdest ways travelers have earned their points and miles, we turned to the TPG Lounge on Facebook to ask readers to share the weirdest things they've ever done to get closer to that next award ticket.

I'm impressed (and a little envious) after reading through the responses. Oh, how I wish I was collecting travel rewards during the days of buying dollar coins from the U.S. Mint. But I was right there with many of you all when it came to IHG's Priceless Surprises promotion in early 2016.

While in labor, I sat in my hospital bed filling out hundreds of 3" x 5" index cards during that particular promotion. I knew I wouldn't have the time after the baby came, but I was able to fill out cards for multiple family members. We ended up with hundreds of thousands of IHG points between us. It's amazing what the impending arrival of a baby can do for one's motivation!

(On that note, I do hope to set my daughter up with a credit card once she's the acceptable age. Not only will it help her build credit, but she'll be on her way to becoming a miles and points fanatic like her mom.)

Related: TPG Beginner's Guide: Everything you need to know about points, miles, airlines and credit cards

Here's more of what TPG readers shared about their weirdest miles and points exploits:

One reader and his wife drove to a park in Los Angeles where Southwest was offering people a chance to spin a wheel and win a prize. They won 5,000 Southwest points and a tote bag. Not bad for a leisurely afternoon trip.

I was able to score two free tickets to Great Britain during a Facebook contest back in 2012. The giveaway was sponsored by Great Britain's official tourism site and it gave away 10 tickets every day for a week. In order to win, you had to be one of the first 10 people to respond to a question on Facebook. I quickly learned the contest was far less about luck and more about strategy.

There were multiple commenters who used travel rewards credit cards to maximize the money spent on their weddings -- which is always a good idea. One, in particular, discovered that her wedding venue coded as restaurant spending, so she and her soon-to-be husband opened multiple travel cards to earn tons of miles and points and capitalize on that bonus category. They ended up being able to go to Japan for two weeks using the travel rewards they earned from their wedding expenses. Of course, TPG always recommends paying off all credit cards in full each month. Otherwise, the rewards you earn can be negated by the finance charges you may incur with an ongoing balance.

Related: The best ways to travel to Japan with points and miles

You read that right. In 2005 AirTran gave away free flights for collecting promotional cups from Wendy's. Surprisingly (or maybe not?), many readers reminisced about how they rummaged through dumpsters to find extra cups, which translated into dozens of free flights.

I've got to admit, that's dedication.

Lots of readers told us of various mileage runs they've taken in the past. One flew from San Francisco to Honolulu just to spend 45 minutes on the ground before flying back home. She kept her elite status and had a good laugh with five other passengers on the same flight who were doing the same thing.

Another reader took a half-day trip from Amsterdam to Singapore on Lufthansa solely for the purpose of maintaining his United Premier 1k status. And yet another shared a crazy routing on a cheap business class fare, flying from Amsterdam to Buenos Aires by way of London, Dublin, then London (yes -- through London twice) and then New York, just to earn bonus award miles.

If this sounds like fun, here's how to find your own mileage run. (And a counter-argument on why mileage runs are a bad idea.)

In the past, various airlines have offered miles and points for test-driving a car. One reader who commented in the TPG Lounge was able to earn a nice stash of American Airlines miles by test-driving a Mazda. The funny thing was, the salesman didn't even require her to actually drive the car, he just filled out the mileage form for submission.

One commenter shared how he was able to take advantage of a Hilton promotion a few years ago. During the promo, you could earn 2,000 Hilton points for a paid stay, which included charging an incidental on an award stay, plus, you could earn a 10,000-point bonus after five stays.

The reader was staying at a Hampton Inn and had used points for the booking, so he just needed an incidental charge to earn the 12,000 bonus points with the promo. Unfortunately, that particular hotel didn't have one of those little convenience stores where he could have purchased an inexpensive item. Instead, he convinced the hotel manager to charge him $4 for in-room Wi-Fi (overriding the system that had waived the charge due to his elite status) in order to qualify for the promotion.

There have also been hotel promotions (cough, Radisson, cough) where checking into an inexpensive hotel stay earned you enough points to stay at any Radisson in the world for two nights, if you had the cobranded credit card. Whole groups of frequent travelers would coordinate their check-ins just to hang out at the hotel together and then go home.

And don't get us started on the bygone era of Hyatt's Faster Free Nights. We just won't go there.

Having remodeled a few homes myself, I can personally relate to all the readers who've earned travel rewards on home improvement purchases. For example, one commenter shared how he used his Chase Freedom Unlimited to purchase his parents' new air-conditioning unit. He was able to stack deals by purchasing Lowe's gift cards through the United MileagePlus X app and earned more than 12,000 United miles in the process of helping out.

One reader collected Kellogg's cereal box tops to earn thousands of American Airlines miles. He even went as far as having address labels made up with his American Airlines loyalty program number and address so that he could process the box tops in bulk.

I wonder where cornflakes fall on the food pyramid?

Another bought Eggo waffles to earn American Airlines miles under the same promotion. Instead of eating through all the waffles, the reader donated the waffles to a local Ronald McDonald house. (Of course, this gives us flashbacks to the legend of the Pudding Man who earned over a million miles with pudding tops, and scored a tax deduction for donating the pudding.)

Back in the day, one reader was able to purchase savings bonds with a credit card. In doing so he racked up a bunch of Northwest Airlines miles (now Delta). As an added bonus, he is still earning interest off the bonds. That's a double win.

One commenter shared how he earned the increased 200,000-point bonus on the Capital One® Spark® Miles for Business by paying for his wife's IVF with the card. Another reader paid a kid's orthodontics bill with a credit card and then used a Flexible Savings Account for reimbursement. And others mentioned paying for large and otherwise not very fun expenses like a funeral, divorce and drug rehab for a family member in order to meet minimum spending requirements to earn a welcome bonus. It's a decent way to find a little bit of good out of an unfortunate situation.

My favorite response of all? One TPG reader said "Lololol. We're really ill people." And while I couldn't agree more, I'm also all-in on the crazy.

What are some of the crazy things you've done to earn travel rewards? Feel free to share your stories in the comments below.