Maximizing the United Island Hopper with the Excursionist Perk 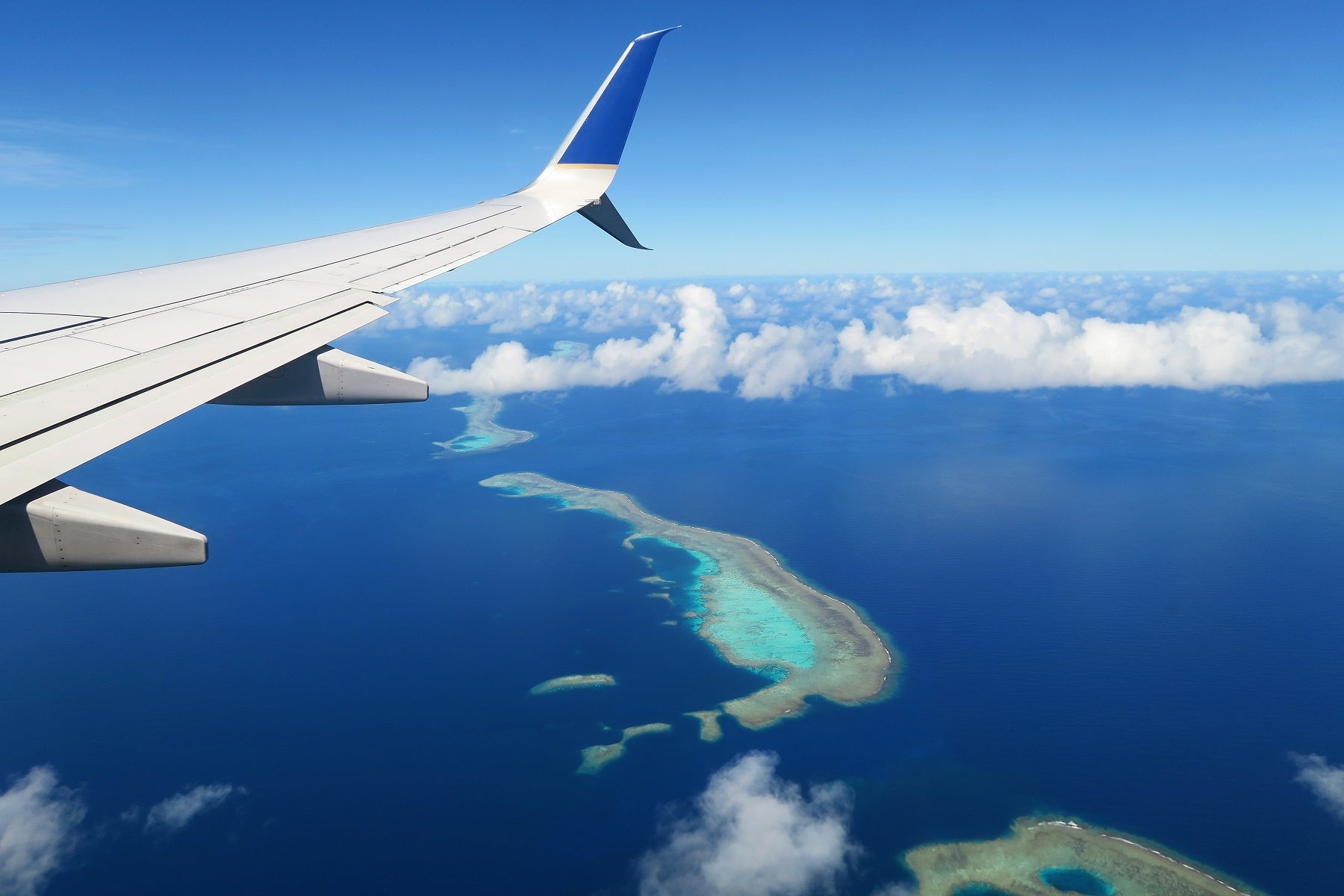 For many travelers, the United Island Hopper is a bucket list trip. This unique route flies from Honolulu (HNL) to Guam (GUM), with stops on multiple islands along the way.

But it isn't cheap. United is the only carrier on most of these routes, and it's a lifeline for the people that live on these islands. In turn, paid tickets can cost well over $1,500 depending on when you fly.

Thankfully, you can experience it yourself from the continental U.S. for under $30 out of pocket using United MileagePlus miles. And with the United Excursionist Perk, you can stop at two or more islands along the way.

Basics of the United Island Hopper

The aptly named Island Hopper flies four times a week between Honolulu and Guam with stops along the way in Majuro (MAJ) and Kwajalein (KWA, stop skipped once a week) in the Marshall Islands, and Kosrae (KSA), Pohnpei (PNI) and Chuuk (TKK) in Micronesia.

These Pacific islands are so small that they barely show up on a map. That said, the routing covers 4,365 miles, so it's undoubtedly the "long way" from Honolulu to Guam. But, you're rewarded with stops in some of the world's most remote inhabited islands.

Related: Guam is open and they might pay you $500 to visit

Basics of the Excursionist Perk

TPG has an entire article about how you can travel more for fewer miles using the Excursionist Perk. But let’s go over the basics here.

A classic example is flying from Newark (EWR) to London Heathrow (LHR). You can stop in London for as long as you like and fly from London to Brussels (BRU). Then, you can fly back from Brussels to Newark after visiting Brussels.

The mileage cost is the same as a round-trip from Newark to London or Newark to Brussels. The flight from London to Brussels doesn’t cost any additional miles.

While that’s the classic example, there are some incredible awards that you can piece together using this perk. With some creativity, you can book redemptions where the free Excursionist flight would cost more than the flights you’re actually paying for. Or, you can work out a four-destination, around-the-world award for the cost of a round-trip award to Asia.

I highly encourage you to explore the Excursionist Perk for other redemptions. But today, we’re going to focus on how you can use it to fly the Island Hopper.

How to visit two destinations along the Island Hopper

The straightforward way to use United's Excursionist perk on the Island Hopper is to book an award to two different destinations along the Island Hopper. The free flight needs to be inside the same region, so you can’t stop in Honolulu along the way from the mainland.

Instead, your destination choices are:

United has implemented dynamic pricing for all of its award tickets. Still, a round-trip ticket from the continental U.S. to any two of these destinations usually costs 70,000 United miles round-trip if saver space is available. Award space can be hard to come by, so start your searches early.

Here’s one example from Los Angeles (LAX) to Majuro via Honolulu. After staying a few nights in the Marshall Islands, you’ll take the Island Hopper a few stops down to the superb scuba destination of Chuuk. From there, the most straightforward route home is through Guam and Honolulu.

This is the cheapest option, too — taxes and fees on this award are under $30.

Alternatively, you can fly back to the mainland through Tokyo Narita (NRT) or Osaka, Japan (KIX). After all, both cities have nonstop service to both Guam and a mainland U.S. airport.

The taxes and fees are a bit higher if you fly home via Japan, but it may be worth it for the AvGeeks out there when Japan's borders reopen.

This same itinerary prices out at $1,816 when returning via Honolulu. While that’s not as bad as I thought it'd be, the award still provides a solid 2.6 cents per mile — well over TPG’s most recent valuation of United miles.

If you have the extra time, you can tack on an additional stop in Oceania for as little as 8,000 extra miles.

United charges just 8,000 miles for a nonstop one-way flight under 800 miles within Oceania if you can find saver award space. Assuming you aren't authorized to visit Kwajalein, your options consist of Kosrae (KSA) to Pohnpei (PNI), Pohnpei to Chuuk (TKK) and Chuuk to Guam (GUM).

That means you can book the following trip for 78,000 miles:

This itinerary used to require making two separate reservations, but United has updated its website to allow a single-itinerary booking. Note that the leg from Pohnpei to Los Angeles via Guam and Honolulu was cut off by United's website.

For example, here’s a two-destination trip stopping in both Majuro and Palau:

This particular routing would take you from Los Angeles to Majuro via San Francisco and Honolulu. You would then fly from Majuro to Palau via the Island Hopper and return from Palau via Guam and Honolulu. That's a lot of flying for 70,000 miles and under $150 in taxes and fees.

Building off of a Hawaiian trip

If you want to build a proper Hawaii stop into your itinerary, the simplest way of doing so would be to book flights to/from Hawaii and then book a separate Island Hopper adventure.

The mileage cost for a trip from Hawaii to two Oceania stops is just 55,000 miles using the Excursionist Perk when saver space is available.

A simple example with all daytime flights would be from Honolulu to Kosrae for a stopover. Then, you can fly from Kosrae to Guam on the Island Hopper for another stop. You can return to Honolulu on United's nonstop flight from Guam.

Related: Your guide to the best seats on United’s Honolulu to Guam Island Hopper

Building off of an Asian trip

An Island Hopper trip is even cheaper if you start in Asia. This may be an obscure use case, but it is worth noting for readers in Asia or those planning a long post-pandemic trip to the region.

United operates a surprisingly large number of flights to Asia out of Guam, with flights to four Japanese cities and Manila (MNL). This means you can take advantage of a great flight deal or redeem a separate award to Asia. Better yet, Island Hopper flights from Asia cost just 30,000 miles round-trip.

Here's a quick example. You'll start by flying from Osaka (KIX) to Chuuk via Guam. After a few nights, you'd continue to Majuro with a quick Island Hopper stop in Pohnpei. On the return, you'd take the Island Hopper from Majuro to Guam and fly back to Japan on United's nonstop flight to Osaka.

Again, this trip costs a total of 30,000 United miles round-trip in economy. This is an incredible deal for this much flying — and you'd see two great destinations along the way.

How to earn United miles

Just remember that all of these cards are issued by Chase and thus subject to the issuer’s 5/24 rule. Alternatively, you could consider buying United miles during a promotion.

United's Island Hopper is a bucket list trip for many in the points and miles world. When you leverage United's Excursionist Perk, you can see multiple destinations for very few miles. Plus, you'll stretch your miles even further if you build the Island Hopper into a trip to Hawaii or Asia.

Related stories
Chase extends current Pay Yourself Back categories; adds new category to Ink cards
10 essential items for traveling teens
Hurricane Ian regaining strength; airports and theme parks in Florida remain closed, cruises canceled
When will Florida cruise ship ports reopen in the wake of Hurricane Ian?
Featured image by JT Genter
Editorial disclaimer: Opinions expressed here are the author’s alone, not those of any bank, credit card issuer, airline or hotel chain, and have not been reviewed, approved or otherwise endorsed by any of these entities.

Our points-obsessed staff uses a plethora of credit cards on a daily basis. If anyone on our team wouldn’t recommend it to a friend or a family member, we wouldn’t recommend it on The Points Guy either. Our opinions are our own, and have not been reviewed, approved, or endorsed by our advertising partners.
See all best card offers
Related stories
Guide
Chase extends current Pay Yourself Back categories; adds new category to Ink cards
Guide
10 essential items for traveling teens
News
Hurricane Ian regaining strength; airports and theme parks in Florida remain closed, cruises canceled
News
When will Florida cruise ship ports reopen in the wake of Hurricane Ian?