Why I was wrong about transatlantic cruises

Articles
Ashley Kosciolek has spent more than a decade writing about travel, with particular emphasis on cruises. Her favorite cities include London; Amsterdam; Krakow, Poland; Phnom Penh, Cambodia; Dawson City, Yukon; and anywhere known for outstanding pizza and theater. You can follow her daily exploits, both at sea and on land, on Instagram or Twitter @slyjabroni.
Follow
June 16, 2022
•
8 min read 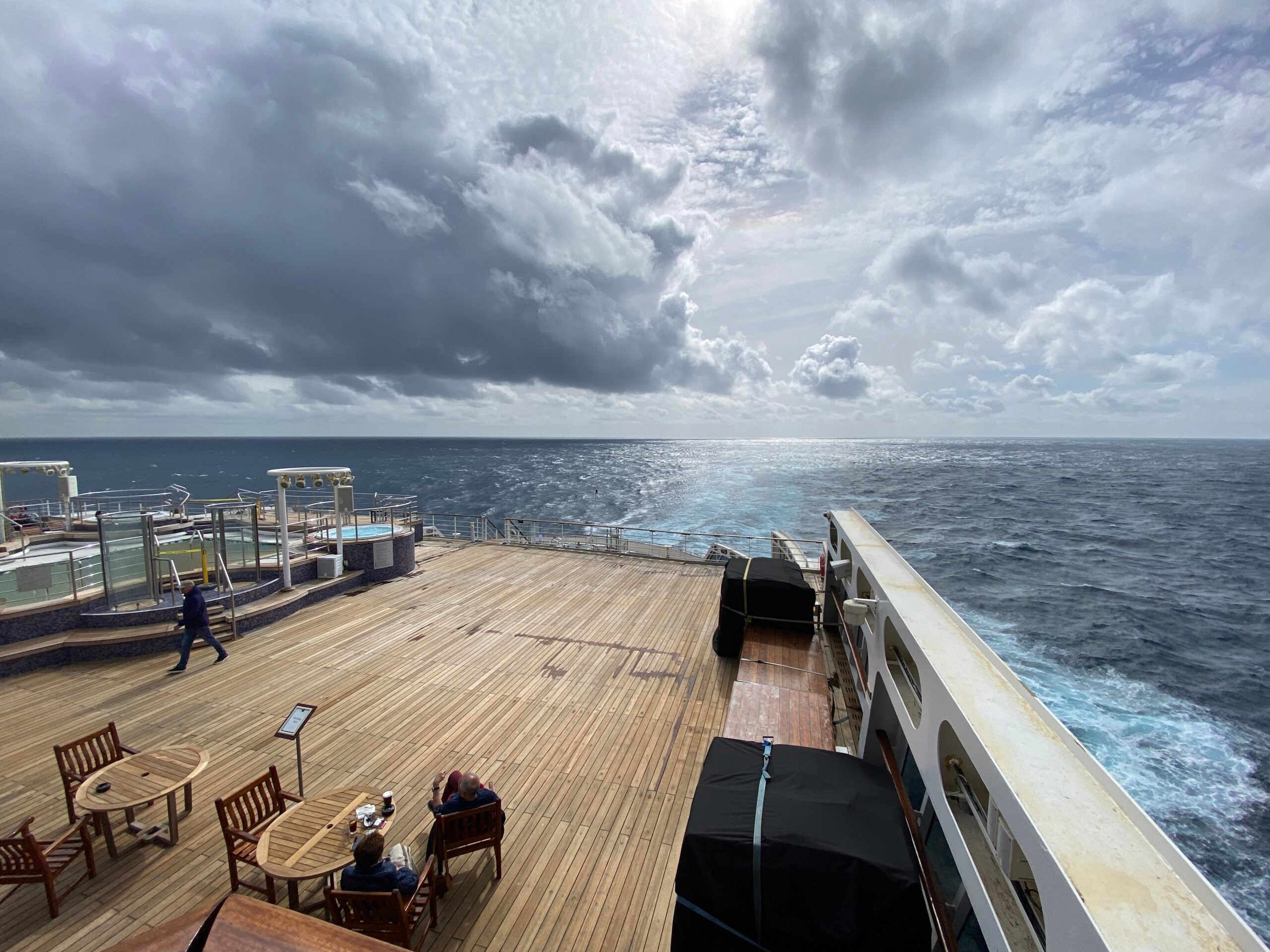 Editor’s note: TPG’s Ashley Kosciolek was hosted by Cunard Line to experience a transatlantic crossing aboard Queen Mary 2. The opinions expressed below are entirely hers and weren’t subject to review by the line.

In 2018, after a 10-month stint working in the United Kingdom, I returned to the U.S. via ship — Cunard's Queen Mary 2, to be exact. I had always been curious about ocean crossings, but QM2's runs are special in that they're the closest thing modern-day cruising has to a traditional ocean liner experience.

I was booked on a crossing from Southampton to New York City via Brooklyn's Red Hook cruise terminal. With a friend and eight bags in tow, I was excited, but also a bit concerned about spending seven straight days at sea.

Would the water be rough? Would all eight of our suitcases fit in the cabin? And just how would we pass the time with absolutely no port calls in between embarkation and disembarkation?

Now I'm back on board the same ship, this time for a voyage in the opposite direction — New York to Southampton. I'm as convinced as ever that these ocean crossings are a fantastic way to relax, learn new things and more fully connect with the sea.

With no port visits, it's easy to be sedentary for a week. However, passengers who are athletically inclined will find no shortage of ways to stay active on the QM2 transatlantic. From yoga and chairobics (yes, that's aerobics in a chair) to Pilates and dance classes (jive, ballroom dance and more), there's an impressive number of choices – some free and some with a surcharge.

If you're super serious about your workouts, you can also pay for sessions with one of the ship's personal trainers or run laps on the vessel's sizeable promenade deck.

You'll learn a thing or two

Cruisers wishing to exercise their minds will also be spoiled for choice, with several daily enrichment talks scheduled. On my latest voyage, I'm sailing with a group of 18 World War II and Vietnam veterans who have been sharing their experiences as part of Cunard's partnership with The Greatest Generations Foundation.

Other speakers are presenting about the history of QM2's namesake predecessor, Queen Mary; vintage photography; the history of London; and meteorites.

Speaking of meteorites, the ship boasts an onboard planetarium, where passengers can check out one of five shows that rotate with each voyage.

Anyone seeking to learn more about the history of Cunard, its vessels, their role in military history and the famous faces they carried through the years will enjoy meandering decks 2 and 3, as well as the ship's stairwells, to read information panels that would be right at home in any museum.

They offer unique activities and experiences

Cruisers won't find surf simulators, laser tag or many of the other high-energy, high-tech bells and whistles that adorn the latest ships in many other lines' fleets. However, QM2 does still feature some Cunard-specific offerings.

On the daily schedule, travelers will find hands-on flower arranging tutorials, watercolor classes, fencing lessons (temporarily suspended due to COVID-19) and other things only found on Cunard voyages.

One quick but fun experience is the near-daily turning of the clocks on ocean crossings. Because there's a time difference of several hours between New York and the U.K., passengers will either gain an hour (on eastbound cruises) or lose an hour (when sailing westbound) each day at noon. At that time, in the Grand Lobby, a bell chimes eight times to mark the change.

The last time I sailed on this ship, I was on my way home after nearly a year abroad. That meant I had a lot of luggage -- six pieces! Combined with the two bags my travel companion brought along, we were seriously worried we wouldn't have enough space in our standard balcony cabin.

It was a tight squeeze, but by nesting pieces when possible and utilizing under-the-bed storage space, we only had to leave one bag out in our room. Fortunately, it tucked neatly into a corner and was out of our way.

Had we needed to, we could also have asked the ship to store a piece or two — but it didn't come to that, which speaks highly of how the vessel's cabins are laid out.

This time around, I have only one suitcase and a backpack, which has made things significantly easier to manage.

One concern I hear from people reluctant to try cruising is that they're worried they'll feel "trapped" or "stuck" on board. I also hear that sentiment echoed by cruisers who are hesitant to embark on a transatlantic voyage with no port days.

With Queen Mary 2, there are tons of open upper decks, as well as a beautiful promenade that wraps around deck 7. There, passengers can grab a deck chair to read or watch the sea, go for a run or walk, or pop into the fitness center to burn off some of their unspent energy.

Although it's not the most reliable, Wi-Fi is available for purchase on board. Cruisers can activate up to four devices for either 24 hours or the entire voyage so they can stay in touch with the outside world.

People wishing to disconnect instead will appreciate the daily news briefings placed in their cabins alongside the daily schedule. The briefings are curated based on the biggest headlines from the country each passenger is from and presented in the appropriate language.

If you're feeling lonely or simply want to make some new friends, head to the main dining room for a meal and ask to sit with or near others with whom you can strike up a conversation.

Likewise, check out the ship's renowned white-glove afternoon tea on the first day or two. Because it's most crowded early on in the voyage, you'll be more likely to have other people with whom to share a table.

There are pets on board

Although service animals are generally allowed on all cruise ships, QM2 is the only vessel with onboard kennels for dogs and cats.

If you're not a fan of animals, don't worry. They aren't allowed to roam the ship, nor do they stay in passenger cabins. Pets reside on deck 12 for a week where they are attended by Oliver, the kennel master and a former zookeeper, who has been with the line for more than a decade.

For anyone who does enjoy furry friends, you can interact with them and their owners once per sailing, when they have their photo taken in front of the ship's funnel. (It's not an advertised event, so inquire at the front desk or visit the kennel area on deck 12 for information.)

Related stories
Here are the best Black Friday travel deals of 2022
Great deal: Book business class tickets at premium economy prices with this Avianca LifeMiles sale
Holiday gift guide: TPG’s 22 travel-friendly picks for 2022
Vail Resorts lift-ticket sales capped; buy your Epic Pass by Dec. 4
Featured image by A view off the back of Cunard's Queen Mary 2 cruise ship during a transatlantic sailing. (Photo by Ashley Kosciolek/The Points Guy)
Editorial disclaimer: Opinions expressed here are the author’s alone, not those of any bank, credit card issuer, airline or hotel chain, and have not been reviewed, approved or otherwise endorsed by any of these entities.