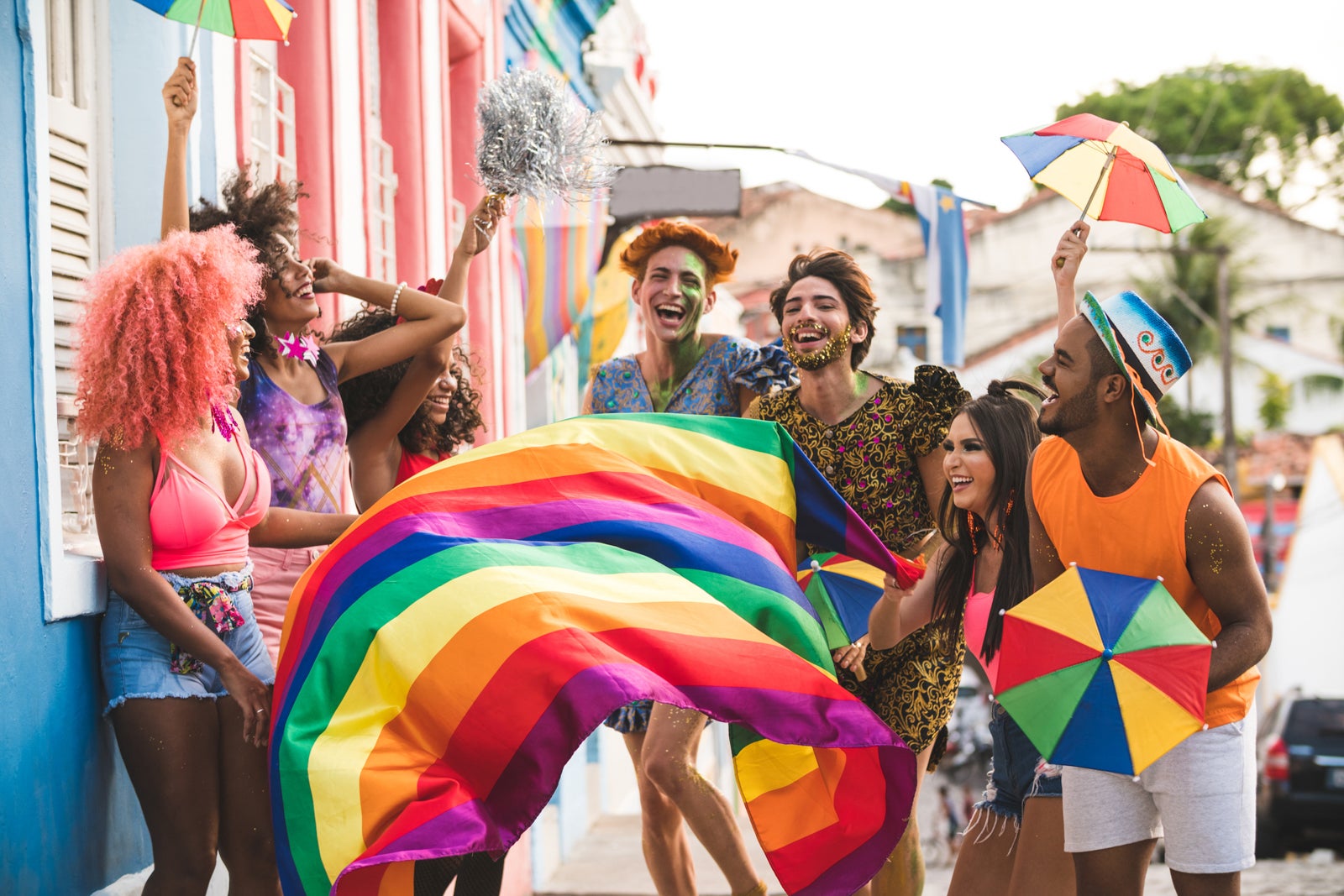 LGBTQ-friendly destinations returned this year bolder and brighter than ever with Pride events and celebrations. As a new era of visibility and advocacy leads to greater protection and legal rights for the LGBTQI+ community, there are more and more exciting destinations around the world where you can be your true, authentic self.

For years, TPG has partnered with the nonprofit Rainbow Railroad to support and rescue LGBTQIA+ individuals. This year, we doubled down on those efforts.

As sponsors of Rainbow Railroad’s Global Freedom Series — a trio of events that celebrate and raise funds for Rainbow Railroad’s mission in cities around the globe — we're showcasing some of the best LGBTQ-friendly destinations. And at the event in New York City, we'll be serving themed cocktails inspired by three of our top picks. But you don't have to be in New York to experience the flavors of Taiwan, New Zealand and Malta.

Read on for our top destinations — including a few inspired sips for the first three to transport you there.

Kaohsiung’s lively youth scene has helped shape this less-touristy second city of Taiwan into an LGBTQI+ destination. The emergence of the city’s queer culture will be recognized when it hosts WorldPride 2025.

You don’t need to wait until 2025 to check out the city’s LGBTQI+ scene, though. Taiwan’s LGBTQ rights are considered the most progressive in Asia, with same-sex activity and marriage legal as of May 2019. The gay scene in Kaohsiung is less flashy and a bit discreet, so you’ll have to know where you’re going and anticipate being greeted by an intercom buzz to get into gay bars and clubs. Top spots to check out include Private Life Gay Bar and Barcode Kaohsiung.

One of the most closed-off countries throughout the pandemic, New Zealand is just starting to reopen to tourism, making now a great time to plan a trip. LGBTQI+ visitors find a safe haven in the progressive ways of New Zealand, especially in the cosmopolitan streets of Auckland.

Start with a tour of downtown Auckland’s Karangahape Road (known as “K Road” to Kiwis), where clubs like G.A.Y. and Family Bar and Club welcome all with the warm, inviting spirit New Zealanders are known for. Depending on the night, head to either Phoenix Cabaret or Caluzzi Cabaret (both on K Road) for some of the country’s most elite and bawdy drag. As for your daytime fun, Auckland is near several excellent beaches, islands and rainforests worth exploring.

The cocktail: Sip a Spiked Apple Cider with apple cider and bourbon.

Malta’s 300-plus days of sunshine offer a bright welcome to all LGBTQI+ visitors. The country continues to top the ​​International Lesbian, Gay, Bisexual, Trans and Intersex Association’s Europe Rainbow index as the most progressive in Europe when it comes to LGBTQI+ rights. Malta banned conversion therapy in 2016 (the first country in Europe to do so) and has passed LGBTQ rights equality at a constitutional level.

The compact island has only a few gay bars and clubs, as some of its legacy LGBTQI+ spots shuttered during the pandemic. Still, you’ll find a hopping scene at Michelangelo Club, where dance parties pick up late. Additionally, there’s The Thirsty Barber, a prime spot for a more refined cocktail scene. The best time to visit is during Malta’s all-encompassing Pride celebration in September.

The cocktail: For the flavor of Malta, get The Bajtra with pear juice, honey, gin and soda water.

Related: How to get to Malta on points and miles

Sydney is arguably the LGBTQI+ capital of the South Pacific. The progressive city is welcoming to LGBTQI+ visitors year-round, though the best time to visit is during Sydney’s three-weekend Mardi Gras celebration in February and March. The city will also host WorldPride 2023 from Feb. 17 to March 5 next year, so plan your trip now, as it will be the hub of epic fun.

If you’re looking to stay in the heart of it all, Darlinghurst is the place to be. Stroll Oxford Street for some of Sydney’s best LGBTQI+ bars, clubs, bookstores and restaurants. And don’t pass up the chance to be in the audience at The Imperial Erskineville’s Drag N Dine show — high-quality camp in a classic cabaret setting.

Related: Your points and miles guide to Sydney, Australia

While Serbia doesn’t top the list of the most progressive countries advancing LGBTQI+ rights, Belgrade’s an enclave for the LGBTQI+ community, even though discretion is advised. Despite a history of Pride parade bans, Belgrade’s recent consecutive string of successful Pride events has proved the city a worthy host of EuroPride 2022, which took place in September.

Start your visit at the Pride Info Centre in the heart of the city for information on local events and insider recs. You’ll find a few gay bars and clubs in and around Belgrade’s Terazije Square: Musk Machine is the go-to spot for dance parties, while XL Bar is a reliable option for cocktails and drag.

Providence is a small, culturally rich city. Its LGBTQI+ community is anchored by nearby Brown University, Johnson & Wales University and Providence College.

You don’t have to go far to find a cluster of gay watering holes that dot the city’s downtown area. Mainstay bars like Mirabar and The Stable are great examples of what you can expect in this friendly city. Stop by The Dark Lady and EGO for rotating drag events and dance parties. Try to time your visit for mid-June when Providence hosts Rhode Island Pride.

Offering a Provincetown, Massachusetts-meets-Fire Island, New York vibe in the Midwest, Saugatuck is an LGBTQI+ summer escape on the freshwater beaches of Lake Michigan. This summer resort town in Michigan is a three-hour drive from Chicago and Detroit, with queer roots that date back to 1910 when the still-in-operation Ox-Bow School of Art and Artists’ Residency began hosting artist retreats.

Expect a low-key scene here, as Saugatuck has only one gay bar: Dunes Resort. Luckily, The Dunes has a happening pool scene along with weekend dance parties, drag bingo and karaoke. For something a bit more toned down, grab a coffee at gay-owned Uncommon Coffee Roasters, a town watering hole since 1994.

A charming Greek port city just off the Aegean Sea, Thessaloniki’s relaxed culture and hip nightlife have fostered an emerging LGBTQI+ scene. The good word’s gotten out, and Thessaloniki has been tapped to host EuroPride 2024.

Take a stroll along Pavlou Mela Street, where you’ll find bars, restaurants, cafes and shops that are easygoing and cater to an LGBTQI+ crowd, especially the area’s active lesbian community. Tap into the energy of the city by starting with visits to Enola and Anothen Cafe Bar.

Related: 7 things no one tells you about the Greek islands

Canada has long been a leader in LGBTQ rights, from adding protection for sexual orientation to its constitution in 1995 to becoming the first country in the Americas to pass same-sex marriage in 2005. So it’s no surprise that Toronto, the country’s largest city, is a hub of LGBTQI+ culture. The city’s Church-Wellesley Village (known locally as “The Village”) is the go-to spot, with a variety of shops, restaurants, bars and a queer community center.

The best time to visit The Village is during its lively Pride Month festival that runs all of June. The month’s celebrations culminate with a Pride parade where you’re more than likely to catch a glimpse of the country’s prime minister, Justin Trudeau, waving a Pride flag.

Related: What it’s like staying at the renovated Park Hyatt in Toronto

Ecuador’s gay rights have advanced considerably in recent years. The country legalized same-sex marriage in 2019, but its history dates back to 1998 when it banned discrimination based on sexual orientation at the constitutional level. Quito’s the place to be for the LGBTQI+ community, as party buses fill the streets nightly and gay nightclubs keep the party going late into weekend nights.

If you plan to dance the night away, know that you’ll need some time to adjust to the high altitude. Quito is set amid the Andes at an elevation of 9,350 feet — that’s almost twice the altitude of Denver, which sits 5,279 feet above sea level. Most of the queer-centric action happens in Quito’s Mariscal district, an area lovingly known by locals as the “Pink Zone.” Touch Uio has a hopping Friday and Saturday night dance floor, while Pravda is a fun karaoke bar where you can mix and mingle with Ecuadorians.

Featured image by POLLYANA VENTURA/GETTY IMAGES
Editorial disclaimer: Opinions expressed here are the author’s alone, not those of any bank, credit card issuer, airline or hotel chain, and have not been reviewed, approved or otherwise endorsed by any of these entities.