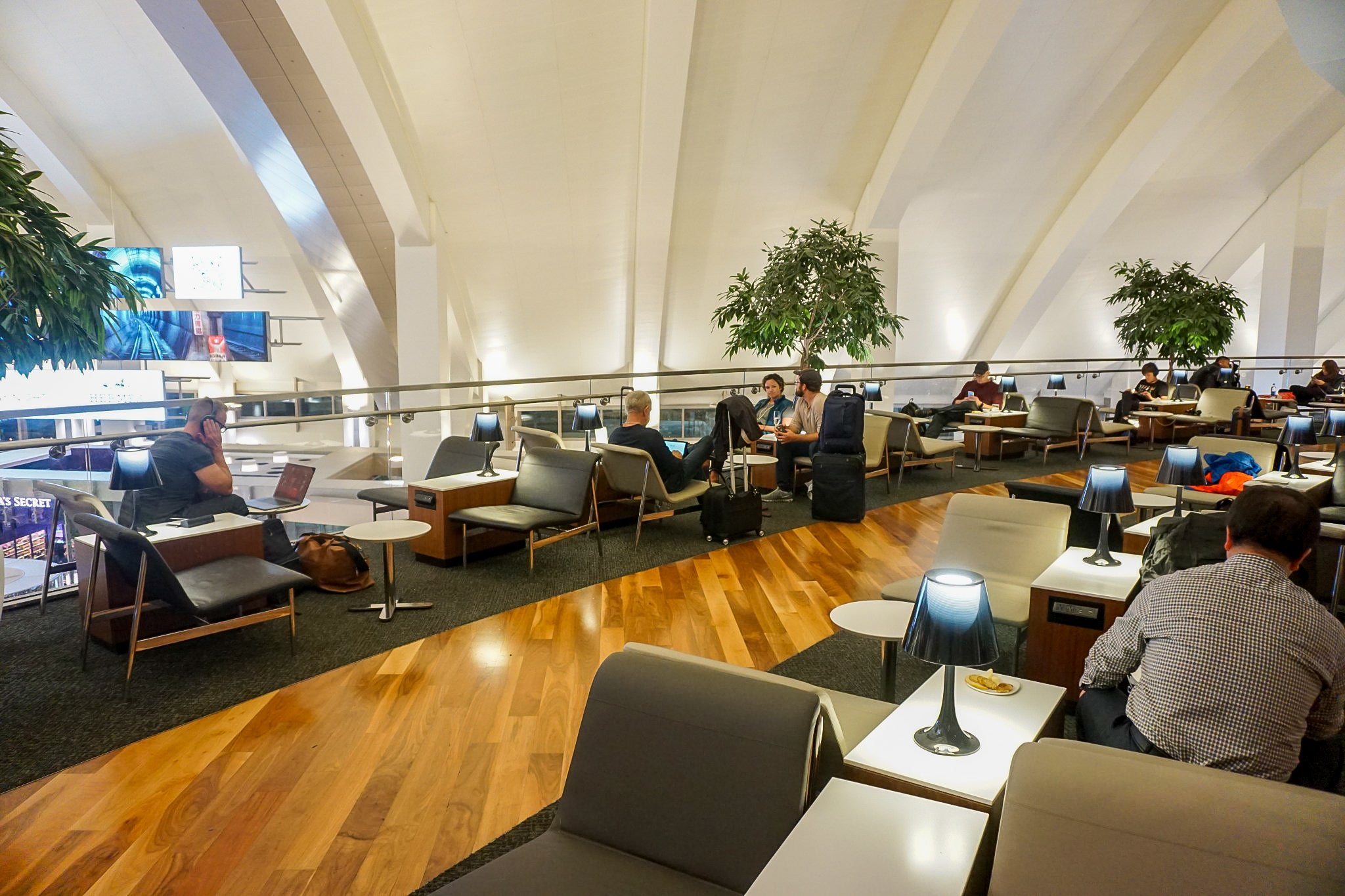 Your reason to look forward to extra time at an airport could be unknowingly stamped on your boarding pass. Premier Gold status in United's MileagePlus program may not get much in the way of upgrades, but it does deliver an outsized and non-obvious benefit at several U.S. airports: free lounge access on a domestic flight, even if your seat's at the back of the plane.

This bonus comes from a fortuitous intersection of the United elite benefit advertised as "Lounge access while traveling internationally" and the US lounges operated by the carrier's Star Alliance partners that welcome travelers with Star Alliance Gold status. Here's a description from the carrier's page that details airport lounge access for Gold and higher travelers:

While entrance to United Clubs requires international travel, you can gain access to Star Alliance lounges on any flight operated by a member airline, including domestic, United-operated itineraries. And fortunately, there are over a dozen such lounges across the US.

At their best, these domestic Star Alliance lounges — listed in the Star Alliance site's Lounge Finder page and in United's new app — offer an experience matching that of a good business class lounge in Europe or Asia and far exceeding United Clubs, making them attractive even to people with full United Club memberships, including holders of the United Club Infinite Card. At worst, they provide the amenities of a domestic lounge at zero cost, allowing travelers without a United Club membership to avoid burning a lounge pass, such as the two, one-time passes per year the United Explorer Card includes.

The other dividing line in domestic Star Alliance lounge access is location. Some sit on the same side of security as the United gates you'd likely fly out of, while others require clearing security a second time to visit a separate terminal, making them best reserved for a non-trivial delay or connection. The most valuable of all: those in the first category that also happen to be at United's hubs.

If you're flying on a domestic United flight, you're virtually certain to touch one of the carrier's hubs, and there are two with airside Star Alliance lounges that are freely available to United Premier Gold travelers on up.

Lufthansa Senator Lounge (near Gate B51)

Washington Dulles International Airport's cramped, window-deprived C/D concourse continues to embarrass the nation's capital, but IAD's B concourse offers two of the better Star Alliance options. Lufthansa's Senator Lounge is closest to the Aerotrain stop, offering a full bar and, from mid-afternoon on, a hot buffet. (Breakfast and lunch options are unremarkable.)

Turkish Airlines Lounge (near Gate B42)

The Turkish Airlines Lounge, five minutes' walk farther from the train, offers a great food selection all day but can get crowded with Priority Pass cardholders. Both offer showers, although Lufthansa's are hidden in the Business Lounge downstairs. To proceed from either lounge to the C/D concourse, take the Aerotrain back to the main terminal and either stay on it for the C gates or transfer to a mobile lounge for the D gates.

The Star Alliance Lounge at Los Angeles International Airport is the finest lounge you can use on a domestic ticket in the United States. It's got a hosted bar and a self-serve one, a full hot buffet, showers and an outdoor patio with a firepit. It also involves about the furthest possible airside walk in the United States: From United's T7 and T8, you take an elevated passageway to T6 and then a series of underground corridors through T5 and T4 before reaching a corner of the Tom Bradley International Terminal some 20 minutes later. Nevertheless, for long layovers, it may be worth the hike.

A much closer option at LAX is Air Canada's Maple Leaf Lounge, situated in the middle of T6. That being said, you won't mistake it for AC's expansive facilities in Toronto or Montreal. This is more like a United Club at an outstation, with a simple buffet and a small self-serve bar.

The next most accessible lounges are those at United outstations that are still airside, requiring minimal hassle to reach.

Detroit offers another airside Lufthansa lounge, this time only steps away from United's gates. Reviews on FlyerTalk and Yelp have been consistently positive, although they suggest it's not as good as the carrier's Dulles lounge.

This is more of an "it-depends" option: If your United flight departs from the H terminals, Avianca's lounge in the J terminal is airside. Otherwise, you'll have to clear security again to enjoy this. But with no United Club at Miami International, Avianca is also the only option, even if you have a full club membership.

Bringing up the rear are the four airports with lounges that require you to reclear security to then access your United flight.

Lufthansa Senator Lounge or SAS Business Lounge (both near Gate B60)

These two lounges deserve your attention if you have a lengthy connection or your flight's delayed, both quite possible at Newark Liberty International Airport. Lufthansa and SAS occupy opposite sides of a corridor in one pier of EWR's B terminal. Lufthansa's is better, thanks to its variety of hot food, but it doesn't open until 1pm. You should also budget at least 30 minutes to take the Airtrain back to the A or C terminals and clear security there, though this could be much longer if you don't have TSA PreCheck.

Air Canada's outpost in the A terminal also requires clearing security a second time and, from Yelp reviews, is nothing special. As at LAX, consider it as an alternative to the nearby United Club.

When United moves to the B concourse of LaGuardia's new Terminal B later this year, the above-average Maple Leaf Lounge that opened with the terminal late last year will become a much more enticing option, but for now, you'll need to reclear security to get to the C gates (from which United currently operates).

This is in the E terminal, while United departs from B. You can walk indoors from B to C, then clear security at C's TSA Pre checkpoints before walking airside to E. Note also that it doesn't open until 12:20 p.m.

These are the least-convenient Star Alliance lounges, tucked away in O'Hare's Terminal 5 — which was inconvenient enough before ORD closed its airport shuttle train for renovations — and with limited hours. SAS looks to be the better choice, thanks to a renovation done in 2017, but you'll need a few hours free to justify the schlep.

Airline elite status grants many privileges, but for mid- and upper-level United Premier elites, you may not be aware that you can access a handful of Star Alliance lounges, even when traveling on a wholly-domestic itinerary. The next time you're booked on United and depart from or connect through one of the above airports, you may want to kick back and relax in a partner lounge rather than endure the craze of the terminal.