300,000 Miles and Counting: Review of the Rimowa Carry-On Bag

Once upon a time, I traveled for years with my stuff crammed in a $20 duffel bag. That seemed normal and effective until we had our first daughter and started traveling with more things, more people and more bags. Then, the type of bag we used quickly started to matter. Carrying stuff on our shoulders no longer cut it as we trudged through the airport like pack mules.

We tried a few different rolling bags as we graduated from the duffel, but as airlines started to crack down on carry-on bag measurements, we found ourselves again shopping for the perfect piece of luggage. About five years ago, just before a big around-the-world trip we were taking with only carry-on bags, we splurged on what was then known as a Rimowa Salsa Deluxe Cabin Multiwheel IATA bag. (The current version is called the Rimowa Essential Small Cabin Case.)

The $600+ Rimowa was a massive leap from our duffel bags of yesteryear, but after five years and well over 300,000 miles of flying, I can definitively state that it was more than worth it.

This Rimowa bag is made from a durable and light polycarbonate with the dimensions: 21.7 inches x 15.8 inches x 7.9 inches. Technically, this bag is too wide to meet some airline carry-on dimensions, but since the telescopic handle is mounted inside the bag, it fits in airport bag sizers (which are a bit larger than the stated airline dimensions). The bag weighs about eight pounds, though there is a “lite” version that is half that weight. 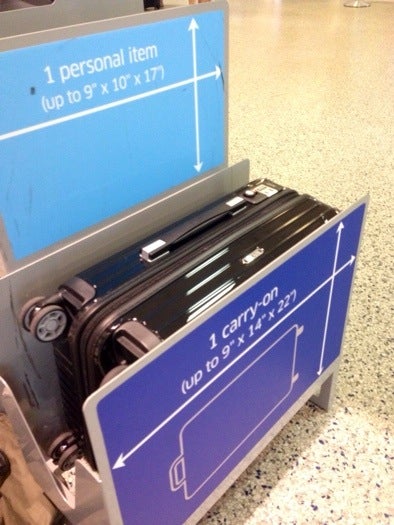 The four-wheel design makes it so easy to maneuver — I can push it around with my pinky finger. In fact, my preschooler can push the bag in any direction with one finger — it’s that easy on a smooth surface.

It is insanely helpful to have the four wheels that go in any direction when you are trying to push this bag sideways down an airline aisle. I quickly transitioned from pulling it behind me on two wheels, as some old-school roller bags operate, to predominantly pushing it flat through the airport using all four wheels. The trade-off is that on bumpier terrain, such as concrete or cobblestone streets outside the airport, it isn’t as easy to pull. I’ll take that trade-off for easy use in the airport and down the aisle of the plane since we don’t typically cover bumpy long distances on foot with our bags. However, think about how you generally travel with your bags before deciding if this is the right bag design for your situation. 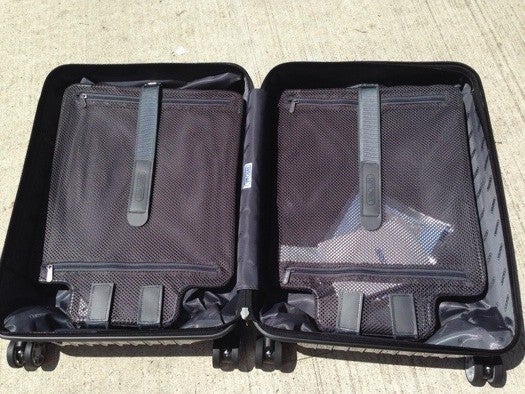 The Rimowa small cabin carry-on has two removable and adjustable flex-dividers that I use to hold small things like swimsuits, toiletries, hair ties, etc. Overall, the storage is (much) better than I expected given its relatively small size. I have been able to pack for an eight to ten day around-the-world trips in just one carry-on.

When I’m stuffing it to the brim, I have to put some pressure on the bag to get it to shut, but once zipped, it is good to go. The bag also has a TSA-approved combination lock at the wraparound zipper.

If you only travel once or twice a year, I wouldn’t consider spending this much on a carry-on bag. (Check out the $225 Away bag for a less expensive alternative.) But if you fly as much as I do, it is very nice to have a bag that is so easy to use and that you know will fit as an airplane carry-on. My now-5-year-old Rimowa doesn’t roll quite as well as it once did and has some well-earned scratches and scuffs, but it is still my go-to bag — and likely will be for a while to come. When the time does come to replace it, the odds are high I’ll buy a new version of the very same bag.

Those with The Platinum Card® from American Express can use the annual Saks Fifth Avenue credits toward the purchase of this or other Rimowa at Saks Fifth Avenue, though always price compare as Rimowa bags are sold at a variety of retailers. (Bonus points, literally, if you can use an Amex Offer when you make your purchase.)

What type of carry-on bag do you use for your adventures?

Read on to find the best luggage for you and your family:

Summer Hull aka Mommy Points, ran the Mommy Points site for families who want to travel more for less using miles and points for seven years and now heads up TPG Family when she isn't exploring the world with her own two girls.
You might like
TPG face masks available for a limited time
News
12h ago
Is it illegal to drink your own alcohol on an airplane?
News
Yesterday
What happens if you’ve used your companion certificate for a canceled flight?
News
Yesterday
Blue Cash Preferred® Card from American Express