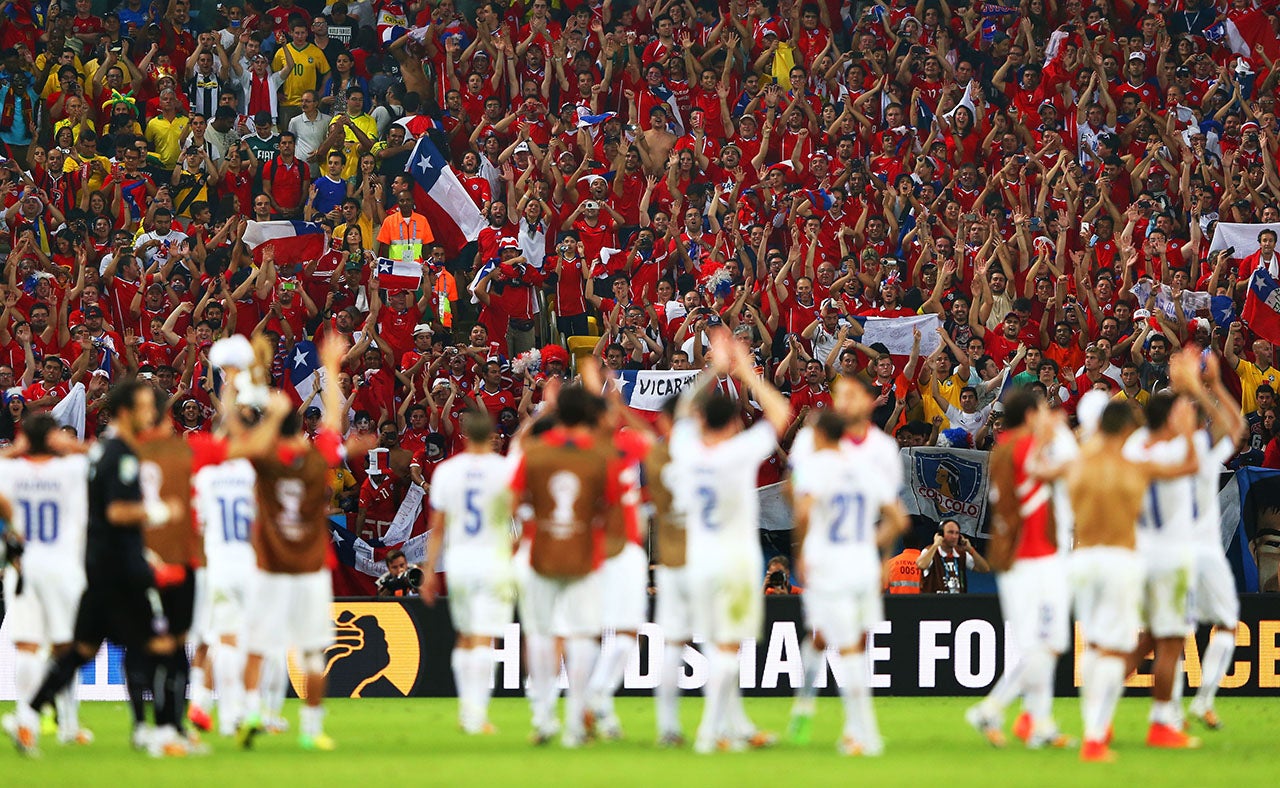 Whether you call it soccer or football, one thing is certain: the World Cup is one of sporting's biggest events. Like the Olympics, the tournament brings together teams and their supporters from all over the world every four years, with games played over the course of a month.

The 2018 FIFA World Cup will take place from Thursday, June 14 – Sunday, July 15 at venues across Russia, including two stadiums in Moscow, as well as others in St. Petersburg, Kaliningrad, Volgograd, Nizhny Novgorod and Sochi and other cities. The mascot of these games is a soccer-playing wolf called Zabivaka, which means “the one who scores” in Russian.

If you’re interested in attending, or if you already have tickets to some of the games but haven’t booked your travel yet, here’s a quick list of ideas of how to use airline miles to get to Russia. In the interest of expediency, we’re mostly looking at options for flying to Moscow (both Sheremetyevo and Domodedovo airports) and St. Petersburg. We’ll also include a few hotel options at the end.

Now, before you get too excited, June and July are part of the high season for travel to Europe, so award availability is scarce as of now. However, I expect it to open up little by little as we get closer to the dates of the World Cup. You might have to get a little creative, though, and expand your search beyond your home airport. Many hotels in Moscow and St. Petersburg are also blacked out for the dates of the World Cup, though rooms might just be on hold at some of them. With all that in mind, here are a few ideas for you.

We’re starting out with SkyTeam options for one main reason: The Russian airline Aeroflot is a member of this alliance. It currently flies nonstop to Moscow Sheremetyevo (SVO) from Los Angeles (LAX) daily, Miami (MIA) three times a week, New York (JFK) three times daily and Washington DC (IAD) three times weekly (from May to September, then one time per week). Aeroflot operates primarily out of Sheremetyevo, as do its SkyTeam partners, Air France and KLM, so when searching for awards, focus on that Moscow airport rather than Domodedovo (DME).

You have a variety of options for booking awards on Aeroflot and other SkyTeam carriers including Delta SkyMiles, Air France/KLM Flying Blue miles and Korean Air SkyPass miles. While I couldn't find any awards currently available on Aeroflot’s nonstops to the US over the dates of the World Cup, you’re not out of options. Aeroflot flies from both Moscow (SVO) and St. Petersburg (LED) to a number of destinations in Europe through which you can connect to/from the US on Air France, KLM, Alitalia or Delta. You can also fly to Moscow Sheremetyevo and St. Petersburg via Amsterdam (AMS) on KLM, Paris (CDG) on Air France, or Rome (FCO) on Alitalia.

That said, I couldn't find any saver-level awards available to Moscow in the next several months, including over World Cup dates, so likely you’ll be paying closer to 70,000-90,000 miles round-trip in economy and up to about 300,000 miles round-trip in business class to fly a combination of Delta and other partners, as you can see in this economy example.

Korean Air SkyPass is a transfer partner of Chase Ultimate Rewards. Remember, you can only book round-trip awards on partners and the online search engine is not great at finding SkyTeam partner availability, so you'll probably have to call in to book an award.

Flying Blue, the mileage program of Air France/KLM, is a transfer partner of all four major transferable points programs: American Express Membership Rewards, Chase Ultimate Rewards, Citi ThankYou Rewards and Starwood Preferred Guest. The Flying Blue program will charge you 50,000 miles round-trip in economy and 125,000 in business class from North America to Europe and award availability on Air France and KLM flights is good, though beware of high fuel surcharges and taxes.

For example, here is round-trip economy award on Alitalia from Chicago (ORD) to Moscow (SVO) for 50,000 miles and $267 in taxes and fees.

For booking awards, your best options are likely United MileagePlus, Air Canada’s Aeroplan program or ANA. Check out this post for more information on which Star Alliance mileage program might be right for you, and this one for strategies for searching Star Alliance award availability.

United is a transfer partner of Chase Ultimate Rewards and Starwood Preferred Guest (the latter at a 2:1 ratio). For a round-trip award from the US to Russia, the program will charge you 60,000 miles in economy, 120,000 miles in business class when the transatlantic portion is on United's own aircraft and 140,000 in business class on partners.

It’s not the quickest journey, but here’s a sample economy itinerary using United miles that gets you from Washington Dulles (IAD) to Moscow (DME) on Austrian for 60,000 miles. Again, I think better options will open up closer to the actual dates.

Here’s the same itinerary in business class for a total of 140,000 miles.

Just for variety, here’s another example business-class itinerary (albeit for a long trip where you might want to head elsewhere in Europe) between Chicago and St. Petersburg via Stockholm (ARN) on SAS for 140,000 miles and $82 in taxes and fees.

Aeroplan is a transfer partner of American Express Membership Rewards and Starwood Preferred Guest. It will charge you 75,000 miles in economy and 115,000 miles in business class to travel round-trip from the continental US and Canada to Russia, which is in its Europe 2 region.

Japanese carrier ANA will charge you 55,000, 88,000 or 165,000 miles round-trip in economy, business or first, respectively. The program is a transfer partner of both Amex and Starwood Preferred Guest. While the online search engine did not find any award availability, I confirmed itineraries I’d found on United.com and Aeroplan.com with the airline’s phone agents, so you might have to call in to book an award if you decide to use this program.

If Oneworld is your alliance of choice, your best options will likely be flying either American or another carrier to either London (LHR), Madrid (MAD) or Helsinki (HEL) and connecting on either British Airways, Iberia or Finnair, respectively. Here’s a post with tips on searching for Oneworld award availability.

In terms of miles, American Airlines will charge you 60,000 miles round-trip in economy, or 115,000 miles in business class. Here’s a sample economy award from Dallas (DFW) to Moscow (DME) on a mix of American, British Airways and Iberia.

And here’s a business-class award from San Francisco to Moscow Sheremetyevo via Chicago and Helsinki on American and Finnair for 57,500 miles.

Don’t forget that if you’re already in Europe and just need a short flight connecting through a hub like London or Helsinki you could redeem British Airways Avios for a short-haul flight like one from Helsinki to either Moscow or St. Petersburg.

Moscow and St. Petersburg both have plenty of hotel options where your points can come in handy…usually. Unfortunately, many hotels already seem to be booked out for the month the World Cup takes place.

In Moscow, Starwood’s hotels are all sold out over the World Cup dates for now — it will be worth checking back over the next several months. The Ararat Park Hyatt Moscow is likewise unavailable, as is the InterContinental Moscow Tverskaya and the Holiday Inn Lesnaya. Rates at the Crowne Plaza: Moscow World Trade Centre start at 43,200 rubles ($744), but I couldn't find any award nights.

For folks with Marriott points, the Moscow Marriott Grand Hotel still has rooms on a few nights during the World Cup dates starting at 25,000 rubles ($430) or 25,000 points per night. The Ritz-Carlton, Moscow costs 40,000 Marriott Rewards or Ritz-Carlton Rewards points per night, and rates start at 20,580 rubles ($354) per night. However, while searching over the course of several days, paid rates fluctuated wildly, and award nights appeared and disappeared seemingly at random.

As for St. Petersburg, the options are limited there, too. There are no SPG properties. All three Marriott properties in the city are unavailable for check-in during World Cup dates. Points rates at both Hilton hotels near the city (well, 12 miles outside it, to be exact) are exorbitant, while paid rates start at over $300, making these poor choices. The Hotel Indigo in St. Petersburg has rooms starting at about 29,000 rubles ($500) but no award nights, and the Crowne Plaza has rooms for 16,400 rubles ($282) or 30,000 points.

While air and hotel options appear to be limited at the moment, if attending the World Cup in Russia is on your 2018 to-do list, you might still be able to use your airline miles to book a ticket to the country and your hotel points to book free stays while you are there. Though award availability in the air and on the ground is tight at the moment, they might open up on several airlines and at hotels as we get closer to the dates of the tournament, which are still about four months away. If you find some great awards, feel free to share them with other readers in the comments section.