Moorea or Bora Bora — Which Island Paradise Is Right For You?

Articles
Darren Murph holds a Guinness World Record as the planet's most prolific professional blogger. He's an explorer at heart, having traversed nearly 50 countries and all 50 US states. He's flown over one million miles on Delta alone, and serves as a senior writer at TPG.
Follow
April 01, 2019
•
13 min read 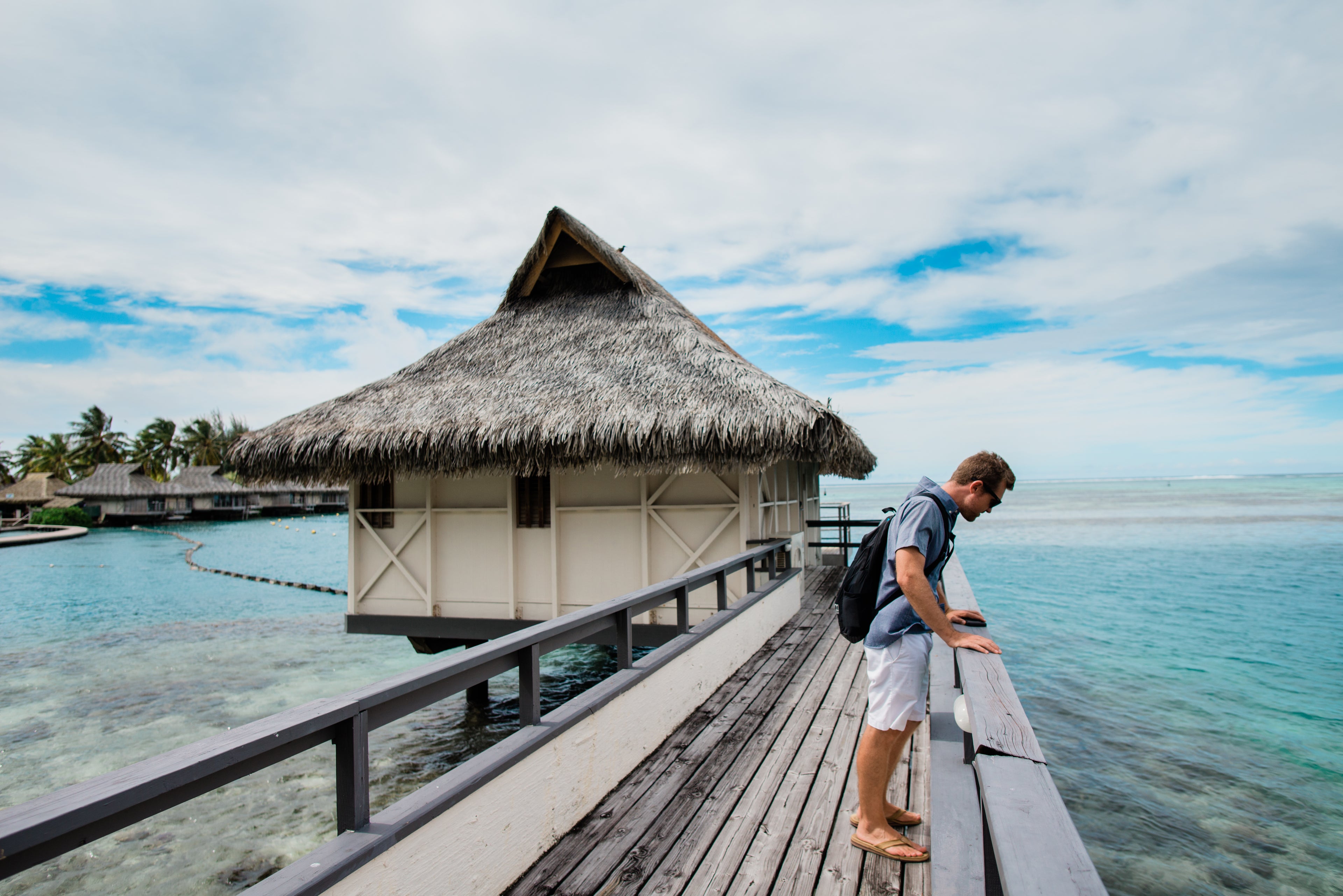 Perhaps you hopped on a recent fare sale to Tahiti, or maybe you're springing for business class on a Dreamliner flown by Air Tahiti Nui or United. Whatever takes you to French Polynesia, there's a good chance you won't be spending the bulk of your time on the island of Tahiti. Although Tahiti is home to Fa'a'ā International Airport (PPT), the primary international gateway near Papeete, most of what makes this island nation so alluring requires another hop.

Aquamarine lagoons, overwater bungalows, pristine beaches and some of the world's most aspirational properties dot the coastline of two locales in particular: Moorea and Bora Bora. I've traveled to both on several occasions, and there's no right or wrong answer to the question, "Moorea or Bora Bora?," but it pays to understand the perks and drawbacks in order to maximize your time in paradise.

So, which island is more beautiful? For starters, Bora Bora is actually a collection of islands, and some are far more jaw-dropping than others. Bora Bora's main island of Vaitape is pretty, but it's not the island you see on postcards and screensavers. Those are a bit farther out and the most beautiful islands are claimed by premiere resorts like the St. Regis Bora Bora, Four Seasons Bora Bora, Conrad Bora Bora Nui, Le Meridien Bora Bora and InterContinental Bora Bora Resort Thalasso Spa.

Moorea offers a slightly different kind of beauty. While the Hilton Moorea Lagoon Resort and Spa offers a lagoon similar in color and clarity to those found in Bora Bora, most properties on Moorea do not. That's not to say Moorea doesn't have spectacularly clear water, just that it's not quite as prevalent. In Bora Bora, you'll have to search far and wide for water that is anything short of awe-inspiring.

Many properties on Moorea also offer small glimpses of how the locals live — homes, shops, garages, etc. — while Bora Bora resorts are the sole occupants of their islands. I personally enjoy the charm of being among locals, but Bora Bora offers a more exclusive atmosphere, one that feels a million miles from real life.

Moorea is a far bigger island than the dollop of land sitting underneath properties like the St. Regis Bora Bora, and its interior is home to lush mountains that soar into the air. This enables you to rent a car or ATV, or hike, to elevated viewpoints on the island for stunning panoramic views that just aren't possible in Bora Bora.

If you only have three or four days in French Polynesia, I'd strongly recommend Moorea over Bora Bora. Moorea is easily accessible via ferry, and we've covered the ins and outs of making that transfer here. The taxi ride from PPT to the ferry dock takes around 20 minutes, and the ferry to Moorea is another 45. Ferries are more plentiful than flights, giving you more transfer options. For families, opting for a ferry over yet another flight could be an even bigger boon.

Visiting Bora Bora not only requires a separate 50-minute flight from Tahiti (PPT), but you're forced to fly on Air Tahiti — a local airline that has a monopoly on this route and charges accordingly.

BOB is situated on a sliver of land with nothing else of note on it. Once you exit the airport, you're faced with yet another connection — this time, by sea. Several of Bora Bora's high-end hotels have dedicated boats docked here to whisk patrons from BOB directly to their resort, usually at egregious prices.

Alternatively, you can take the free Air Tahiti boat shuttle to Bora Bora's central island of Vaitape. Vaitape is hardly a destination unto itself, though you could book a room at the ho-hum Intercontinental Bora Bora Le Moana and mosey over to the stunning InterContinental Bora Bora Resort Thalasso Spa each day for superior views.

If you'll be in French Polynesia for five or more days, the flight to Bora Bora begins to feel a little less daunting.

Bora Bora is, on the whole, more expensive than Moorea. For one, a round-trip flight between Tahiti (PPT) and Bora Bora Airport (BOB) typically runs around $300 to $400 per person, whereas the ferry to Moorea is around $30 round-trip.

Once you land in Bora Bora, there's usually a $100+ boat transfer to any of the nearby resorts, whereas you can reach any of Moorea's hotels and guesthouses for under $30 via shuttle or taxi.

Then, there's food. With the exception of properties on Vaitape, which isn't worth the trouble to visit on its own, each Bora Bora property is a self-contained entity where your food options are limited. If you've ever seen food prices for resorts in the Maldives, you've got an idea of how this works. Conversely, Moorea has a number of restaurants that include shuttle service for free with any reservation. Restaurant Le Mayflower has exceptional food at (relatively) reasonable prices, and you won't pay a thing to get there and back from your hotel.

If you're dreaming of digging your toes into the sand and/or reading book after book on a hammock overlooking a lagoon, Bora Bora will suit you. If you're hoping to do pretty much anything beyond lounge on the beach (or jet ski), Moorea is apt to be more enjoyable.

I love a good beach day but I also want my vacations to be slightly more active. The thing about Bora Bora is that it really only does one thing -- jaw-dropping views and world-class beaches to chill on -- though it does that one thing better than almost any other place on the planet.

Moorea, on the other hand, will feel like a better fit for explorers and adventurers. If you're the type who likes to pack hiking boots and a walking stick alongside your swimsuit, you'll love Moorea. There are ATV tours where you can rumble through the wilderness in search of panoramic viewpoints as well as several renowned hiking trails. You can easily rent a buggy or car to circumnavigate the island, stopping at local shops (the pearls are a particular draw) and viewpoints along the way.

We have a dedicated guide to getting to Tahiti on points and miles, but I'll also make mention of a few pointers specific to the islands of Moorea and Bora Bora.

You can use Delta SkyMiles or American AAdvantage miles to fly to Tahiti via Air France or Air Tahiti Nui, while Chase Ultimate Rewards will transfer to United if you're looking to book its new nonstop flight from San Francisco (SFO). If you're coming from the other side of the world, you can use Chase UR points to book Air New Zealand's nonstop from Auckland (AKL) via United.com.

LATAM operates a once-weekly flight between Easter Island (IPC) and Tahiti (PPT) for only 12,500 Avios each way, enabling you to travel to French Polynesia from Easter Island by transferring Chase Ultimate Rewards or Amex Membership Rewards to complete the booking via British Airways.

There's no direct way to use points and miles to pay for a ferry to Moorea or an Air Tahiti flight to Bora Bora, but those with Capital One cards like the Capital One Venture Rewards Credit Card and the Capital One Spark Miles for Business can use its redemption option to nix some of the cost.

Given the nature of its network, Air Tahiti doesn’t operate a frequent-flyer program, so the only points you’ll accrue are those earned from your credit card of choice. In general, we recommend purchasing airfare with The Platinum Card® from American Express (5x on airfare when booked directly with the airline or via Amex Travel; up to $500,000 on these purchases per calendar year), Chase Sapphire Reserve, Citi Premier® Card (3x on airfare), Citi Prestige® Card (5x on airfare) or Chase Sapphire Preferred Card (5x on travel when booked through the Chase Ultimate Rewards Portal, 2x on all other travel).

On the hotel front, there are far more points and miles options. While the Hilton Moorea Lagoon Resort and Spa charges 80,000+ points per night, this is an ideal property to use the free weekend night and $250 Hilton resort statement credit which come with the Hilton Honors Aspire Card from American Express. Here are a few of our favorite properties which can be booked via points.

If you're debating between a trip to Moorea or Bora Bora, you can't make a poor choice. Both destinations will be imprinted in your mind long after you depart. Unreal, otherworldly and idyllic are all terms that apply to both.

So focus on two primary factors when choosing. First, how long are you staying in French Polynesia? If it's under four days, I'd choose Moorea because of its close proximity to Tahiti (the island where you'll fly into).

If you're staying for five or more days, I'd then consider the second factor: What style of holiday do you prefer? If you're all about water-sports, lounging on the beach and relaxing at the spa, Bora Bora has you covered. If you're looking to splice in some bona fide adventure — ATV tours, hiking, etc. — turn your gaze to Moorea. Or, book yourself a 10+ day stay and hit both, as well as a few other atolls and islands. Air Tahiti offers several airpasses that provide great value when visiting several islands. The "Bora Bora Pass," for example, allows you to visit six Society Islands from €406 ($465).

Related stories
What are points and miles worth? TPG’s December 2022 monthly valuations
Capital One Venture X to lose Priority Pass restaurants and spa services as of Jan. 1, 2023
December 2022
Current Hyatt promotions: Bonus points on stays and dining plus double stay credits
Featured image by Checking out the fish on an overwater bungalow walkway (Photo by Darren Murph / The Points Guy)
Editorial disclaimer: Opinions expressed here are the author’s alone, not those of any bank, credit card issuer, airline or hotel chain, and have not been reviewed, approved or otherwise endorsed by any of these entities.