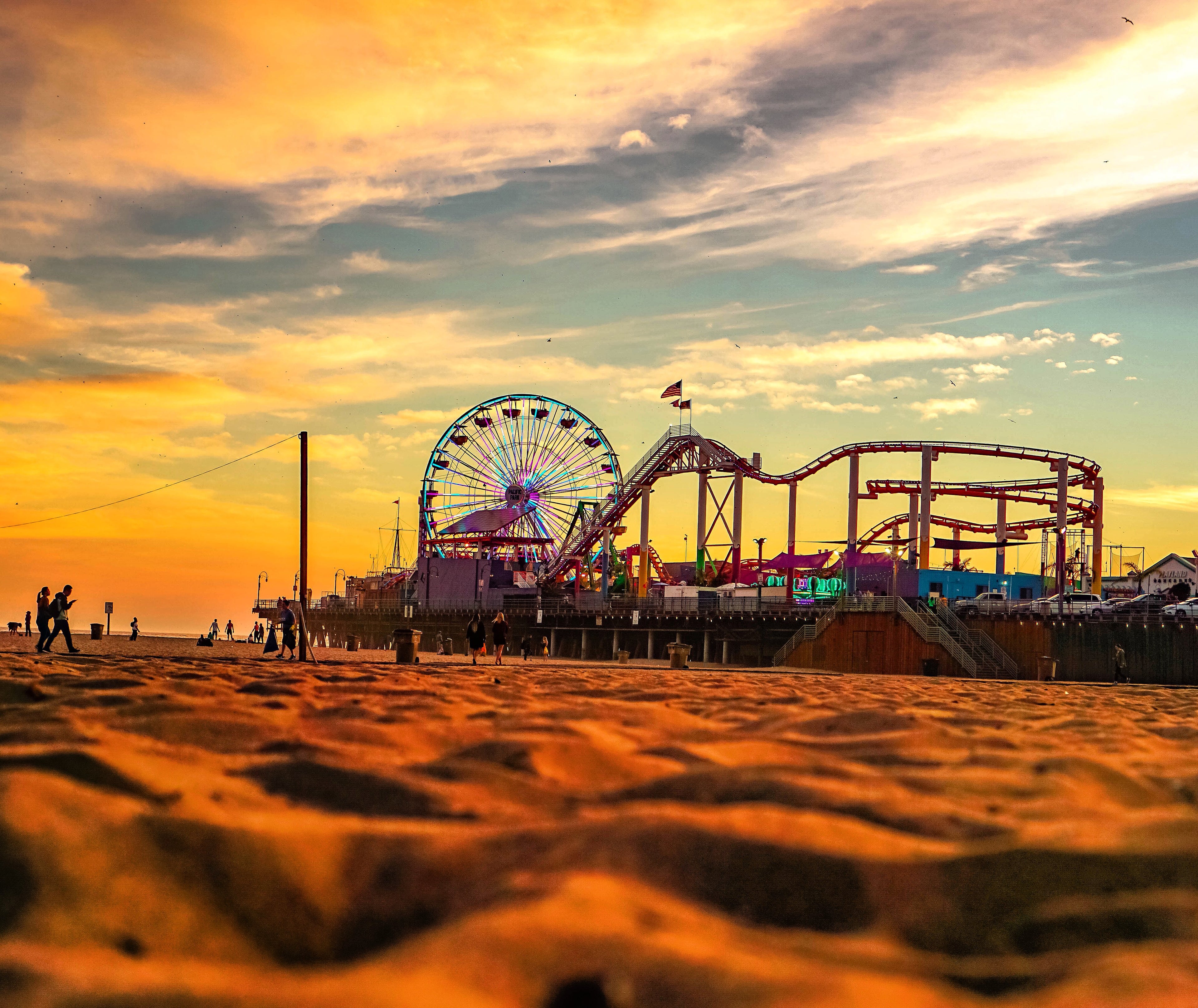 14 Mistakes Most Travelers Make in Los Angeles
This post contains references to products from one or more of our advertisers. We may receive compensation when you click on links to those products. Terms apply to the offers listed on this page. For an explanation of our Advertising Policy, visit this page.

I remember the first time I ever visited Los Angeles. I was a kid on the brink of adolescence, visiting with my mother and sister from the rural South. I was captivated by the concrete city and its Pacific Ocean backdrop. But while I’m sure we made our fair share of mistakes on that trip, having lived in the City of Angels for the last few years, I’ve learned a thing or two.

For first-time visitors, the city can be both beautiful and overwhelming — especially if you're snarled in its infamous traffic. To keep from stumbling into all-too-common LA pitfalls, avoid these 14 mistakes travelers consistently make in Los Angeles.

1. Planning to See the Entire City on One Trip

Simply put, unless you’re staying in Los Angeles for weeks, it’s impossible to see the entire city in one trip. I prefer to picture Los Angeles as a string of micro cities, each with its own character. If you want a beach trip, stay on the west side, where you'll be reasonably close to Santa Monica, Malibu and Venice. But don’t stay near the beach cities if you'd prefer to visit Hollywood, West Hollywood and downtown Los Angeles. If you do this, you’ll spend most of your trip in the car.

I love Disneyland as much as the next person, but it is not in Los Angeles any more than the Jersey Shore is in Manhattan. If you try going to Disneyland from Los Angeles on a good day, you’ll spend at least two hours in your car. On a bad day, it could easily be three hours. If you want to visit Disneyland, stay in Anaheim.

3. Trying to Get a Photo in Front of the Hollywood Sign

While you can see the Hollywood Sign from all around Los Angeles, you can’t take a a selfie in front of it, touch it or really get anywhere close to it. Set behind a restrictive fence atop Mt. Lee — and under heavy surveillance — the Hollywood Sign is off limits, unless you want to go for a hike. There are a few trails that get you close to the iconic signage, though the closest view is from behind.

4. Thinking You're in a Movie

Many a television show and movie (think: "Keeping Up with the Kardashians") have given Los Angeles an image of over-the-top consumption. But that image of Los Angeles, usually centered in Hollywood and Beverly Hills, is a microcosm of LA. For example, I can count on one hand the number of times I’ve been out in Beverly Hills. If you want glitzy Los Angeles, you can have it, but it only reflects a small part of the city.

With that said, you’re probably not going to see a celebrity in Los Angeles. Yes, you can take a TMZ Celebrity Tour or Celebrity Homes Tour, just like I did as a little kid, but don’t go out of your way to see celebrities. Since moving to Los Angeles five years ago, I’ve only ever seen a celebrity in line at the grocery store, at the gym, in a hole-in-the-wall sandwich shop and on a billboard.

5. Going to the Hollywood Walk of Fame

If you want to experience all of Los Angeles’ stereotypes at once, then sure, go to the Hollywood & Highland Center, home of the Hollywood Walk of Fame. Here, you’ll find throngs of people, bumper-to-bumper traffic and everyone (Superman and Jack Sparrow included) trying to sell you something. It’s the Times Square of Los Angeles, and if you absolutely must have a photo of your favorite celebrity’s star, then go. But otherwise, skip it.

The great Los Angeles food critic, Jonathan Gold, said, “People not from Los Angeles sometimes don’t understand the beauty you can find in mini-malls.” The fact is that some of LA’s best restaurants are in strip malls. This includes Sushi Gen in Little Tokyo, where people line up all day for some of the best sushi in the city; and Beverly Soon Tofu in Koreatown, which "Parts Unknown" fans may recognize from when the late Anthony Bourdain came here for an episode. Others include Trois Mec, Jitlada, Kura and Salsa & Beer.

7. Only Flying Into or Out of LAX

Most travelers fly into Los Angeles International (LAX) when visiting the city for the first time. And given its connectivity, that makes a lot of sense. However, that’s hardly the only Los Angeles area airport. Los Angeles County has several commercial airports, including Hollywood Burbank Airport (BUR), which is just a few miles from Hollywood. I frequently fly into and out of Burbank’s airport, where you can be through check-in and security in less than 10 minutes. That’s impossible at LAX. Other overlooked Los Angeles airports include Ontario International Airport (ONT) east of Los Angeles; Long Beach Airport (LGB); and, just across the Orange County line, John Wayne Airport (SNA).

8. Taking a Taxi to and From the Airport

Regardless of where you fly into, never catch a cab at the airport. If you're looking for a ride across town and, inevitably, get stuck in traffic, a yellow cab is a surefire way to run up a frighteningly expensive charge. Alternatively, go ahead and pull up Uber or Lyft when you get off your plane, and follow the instructions for calling and waiting for your ride. You’ll have to wait a few minutes, but your wallet (or boss) will thank you.

I know, everyone wants to visit Venice Beach as a West Coast version of Miami’s South Beach. However, as the most crowded beach in Los Angeles, it's easily my least favorite. Even when I lived in Venice, I would avoid going. If you want an iconic California beach, just go a little farther up the strand to Santa Monica, or hop in the car to head south to Manhattan Beach. For more lovely beaches without the crowds, head north toward Malibu on Highway 1.

Los Angeles has some great shopping malls, many of which are great mixed-use spaces, like The Grove in Mid-City and Third Street Promenade in Santa Monica. But some of the best shopping, much of which is supporting local stores, is found lining the streets of Robertson Boulevard, Larchmont Boulevard, Melrose Avenue, Abbot Kinney Boulevard, and both Montana Avenue as well as Main Street in Santa Monica. Additionally, Los Angeles is home to specialty markets that come to life on weekends, like the new ROW DTLA, Melrose Trading Post, Grand Central Market and numerous farmers markets that flourish around the city.

12. Standing in Line for Hot Dogs

When I lived in West Hollywood, I would frequently drive past Pink's Hot Dogs, a Hollywood gourmet hot dog landmark since the 1930s, where people line up all day for a hot dog named after their favorite celebrity. But if you're going to stand around in a line for fast food, do it for the tacos. While there are many taco stands, trucks and sidewalk taco vendors to choose from, I recommend Kogi from chef Roy Choi (famous for its short rib tacos). Depending on the time and day of the week, you might find one of his trucks parked on Magnolia in North Hollywood, or South Grand Avenue in downtown LA.

There, I said it. Don’t get me wrong, I love a good In-N-Out burger, but it’s nowhere close to the best burger in Los Angeles. For the best burger in Los Angeles, go to Father’s Office, with locations in Santa Monica and Culver City, or Petit Trois in either Highland Park or the Valley. Other great Los Angeles hamburgers include Cassell’s Hamburgers, HiHo Cheeseburger and Stout, where you can pair your burger with beer. If you must have an In-N-Out burger, and are flying out of LAX, just get it on your way to the airport, since there’s one by the entrance.

14. Getting a Parking Ticket

Truthfully, understanding Los Angeles parking signs can be a bit like trying to understand Latin. Almost anywhere you park is going to have some type of restriction, but others might as well be a calculus problem. For metered parking, you can typically use a card to pay. However, I’d recommend using parking apps such as ParkMobile and LA Express Park, both of which can help you find parking spots and pay for them without having to feed the meter.

Feature photo by Spencer Spellman for The Points Guy.