From Venice to Rome: 6 cities you can easily visit on Italy’s high-speed train 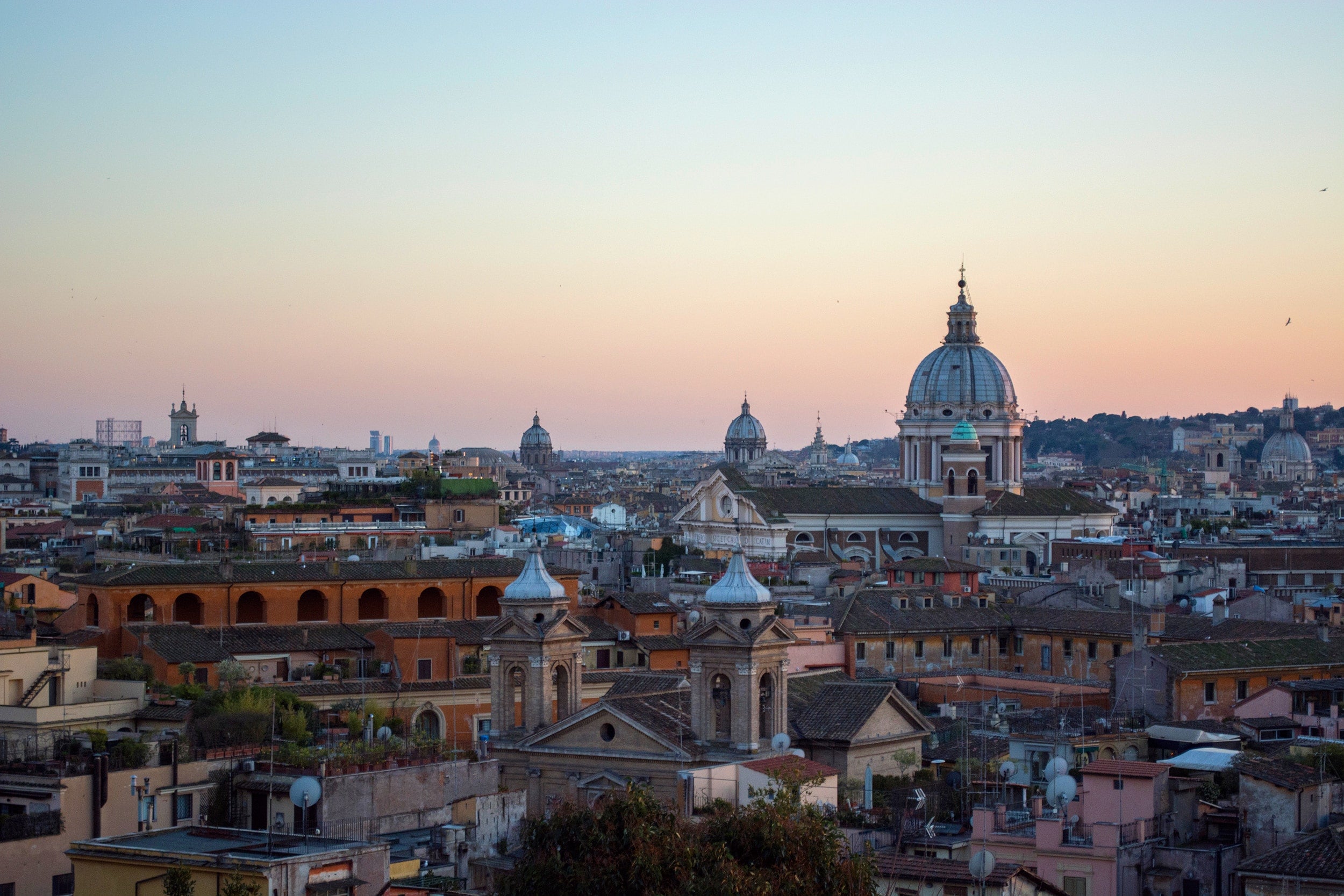 One could joke that the Frecciarossa is the only thing in Italy that runs on time — and it's true, more or less.

The Frecciarossa or "Red Arrow" (and its sibling, the Frecciargento or "Silver Arrow") are high-speed trains that crisscross the boot from north to south, stopping in major cities such as Rome, Florence, Milan and Venice. Run by Italy's national train operator, Trenitalia, they might be the most efficient way to get around the country. Trains go up to 190 miles per hour, making them significantly faster than driving and much easier than flying domestically.

If you're planning a multicity trip to Italy, chances are you're going to take the Frecciarossa. It's clean, efficient and comfortable, with bathrooms and a snack car on board. Just keep in mind that ticket prices rise the closer you get to your travel date, so buy them in advance if you can. You can easily purchase tickets online and show the PDF confirmation to the conductor on board. Then, just sit back, relax and watch the green fields and rolling hills whizz by.

Not sure where the train will take you? These are some of the best destinations you can visit on the Frecciarossa.

If you plan to visit the Amalfi Coast, Capri or Ischia, you're going to start your trip here. Napoli Centrale (the main railway station) is only 75 minutes from Rome by Frecciarossa. Compare that with over two hours in a car.

Though many people just pass through on their way to the coast, you might want to consider lingering longer here. It is the birthplace of pizza, after all. Get some at classic pizzerias such as L'Antica Pizzeria Da Michele or Dal Presidente Pizzeria. Then wander around the historic city center — a densely-packed maze of streets filled with treasures, like "The Seven Acts of Mercy," which Caravaggio painted in the Church of Pio Monte della Misericordia.

Marriott only has one hotel in Naples, but if you have World of Hyatt Points, you could redeem them at Grand Hotel Parker’s or Romeo Hotel, which are members of Small Luxury Hotels of the World.

The Eternal City, Caput Mundi — whatever you call it, Rome is one of the most beautiful cities on earth. (Take it from me — I live here.) It's the number one destination to visit in order to learn about the ancient Roman Empire, but there's so much more than that. The city is like a layer cake where you can see different eras and architectural styles (ancient, Medieval, Renaissance, Baroque and modern) butting up against each other.

Plan to spend at least three to four days here in order to take in the city's most important sites, including the Colosseum, the Roman Forum, the Spanish Steps, the Trevi Fountain, Piazza Navona, the Pantheon and the Vatican. Don't make the mistake of trying to cram it all into 48 hours.

A treasure trove of Renaissance masterpieces, Tuscany's capital ranks high on the bucket list of most travelers visiting Italy — and rightly so. You could spend a few pleasant days taking in the artistic masterpieces at the Uffizi Gallery, the Accademia Gallery and Pitti Palace, as well as architectural marvels like the Duomo and Palazzo della Signoria. Florence has a long tradition of artisans crafting leather goods, ceramics and mosaics made with semiprecious stones, making it a great place to go shopping for one-of-a-kind souvenirs.

Florence is about 90 minutes from Rome on the Frecciarossa — half the time it would take you to drive. You could, however, use it as a jumping off point to explore Tuscany's rolling hills, charming villages and vineyards by renting a car when you're ready to zoom off into the countryside. We love the mountainous northwestern region of Garfagnana for an Italian adventure filled with hiking, cycling, rafting and horseback riding. Marriott's Renaissance Tuscany Il Ciocco is a Category 4 property set in a 1,700-acre estate overlooking the village of Barga, nestled more than 1,300 feet up in the foothills. Rooms start at 20,000 points.

Prefer to stay in the city? Consider the exquisite Hotel Lungarno, which is part of the Small Luxury Hotels of the World network, so you can use your World of Hyatt points here. But you can also book it through the American Express Fine Hotels & Resorts (FHR) program if you have The Platinum Card® from American Express or The Business Platinum Card® from American Express. In addition to 5x on prepaid hotel stays when booked with American Express Travel & properties booked through FHR come with a room upgrade upon arrival when available; daily breakfast for two; guaranteed 4 p.m. late checkout and a unique property amenity. In this case, that's a complimentary one-way sedan transfer from the hotel to the airport — perfect if your train tour of Italy ends in Florence.

Italy's fashion capital should be on every design lover's travel to-do list. But even if you don't care about designer clothes, it's pretty amazing to see what Italy's most famous fashion dynasties have done here. From the Fondazione Prada, where you can see contemporary art and dine at Bar Luce designed by filmmaker Wes Anderson, to Pasticceria Marchesi (the uber-Instagrammable pastry shop owned by Prada), there are countless places aesthetes will appreciate.

Milan is also an important destination for cocktail lovers, who should visit Camparino — hidden inside the famous Galleria Vittorio Emanuele II — and Bar Basso, where the Negroni Sbagliato was born. From Florence, you can get here in just under two hours on the Frecciarossa. From Rome, the train takes closer to three hours.

Piedmont's capital often gets overlooked, but it's a beautiful little jewel of a city and a great starting point for a trip to the vineyards that produce some of Italy's most prized wines. While Florence was ruled by the Medicis, Turin had the Savoys, who imbued the city with a bit of a French flair that can still be felt today.

Turin is home to many grand cafés once frequented by intellectuals, artists and other members of high society. Savor a cappuccino at Caffè San Carlo or Caffè Torino in the morning before heading to the Museo Lavazza, which opened last year and is a museum dedicated to coffee (think: the process, the culture and history of coffee-making, plus a coffee tasting). In the evening, drop by Farmacia del Cambio. Established in 1757, it's the place to go for a Milano Torino (a Negroni without the gin). It takes about four hours to get here from Rome or just one hour from Milan.

Staying in Turin can be a challenge for travelers hoping to book rooms with points. Consider a classic (the elegant Turin Palace Hotel, for example) and use flexible rewards to help offset the cost of your stay. For example, you could earn Ultimate Rewards points with the Chase Sapphire Preferred Card and book your stay through the Chase Ultimate Rewards travel portal. Or, you could use Venture miles earned from the Capital One Venture Rewards Credit Card to “erase” the cost from your statement.

Staying in Turin can be a challenge for travelers hoping to book rooms with points. Consider a classic (the elegant Turin Palace Hotel, for example) and use flexible rewards to help offset the cost of your stay. For something quite different, try the DoubleTree by Hilton Turin Lingotto, which opened early last year and offers exclusive access to Lingotto, the Renzo Piano-redesigned complex famous for its rooftop racetrack. Rooms are available from 24,000 Hilton Honors points per night.

There's no place on earth quite like Venice — as crowded as it can get, the city of canals holds an ever-enduring appeal. It may not be possible to avoid the crowds completely, but arriving by train and spending at least a night or two will ensure you can experience this magical city in the evening — and that you won't have to pay the day-tripper fee. Once the aforementioned crowds have dispersed after sundown, Venice takes on the quality of a film set frozen in time. It's one of the most romantic cities not just in Italy, but on the planet.

There are a number of great hotels for travelers with points to burn in Venice, including the JW Marriott, a Category 7 property that's available from 60,000 points per night when off-peak pricing is in effect.

Be sure to visit the Palazzo Ducale and gawk at the Byzantine mosaics at the Basilica di San Marco, but also explore lesser-known areas like the islands of Giudecca and Burano. It takes about 2.5 hours to get here from Milan or just under four hours from Rome.

Getting the train while abroad can be a really fun way to get around and a nice alternative to driving or flying. And in Italy especially so, since the trains are fast, clean and above all else, reasonable priced.