La Dolce Vita: A Review of The St. Regis Rome 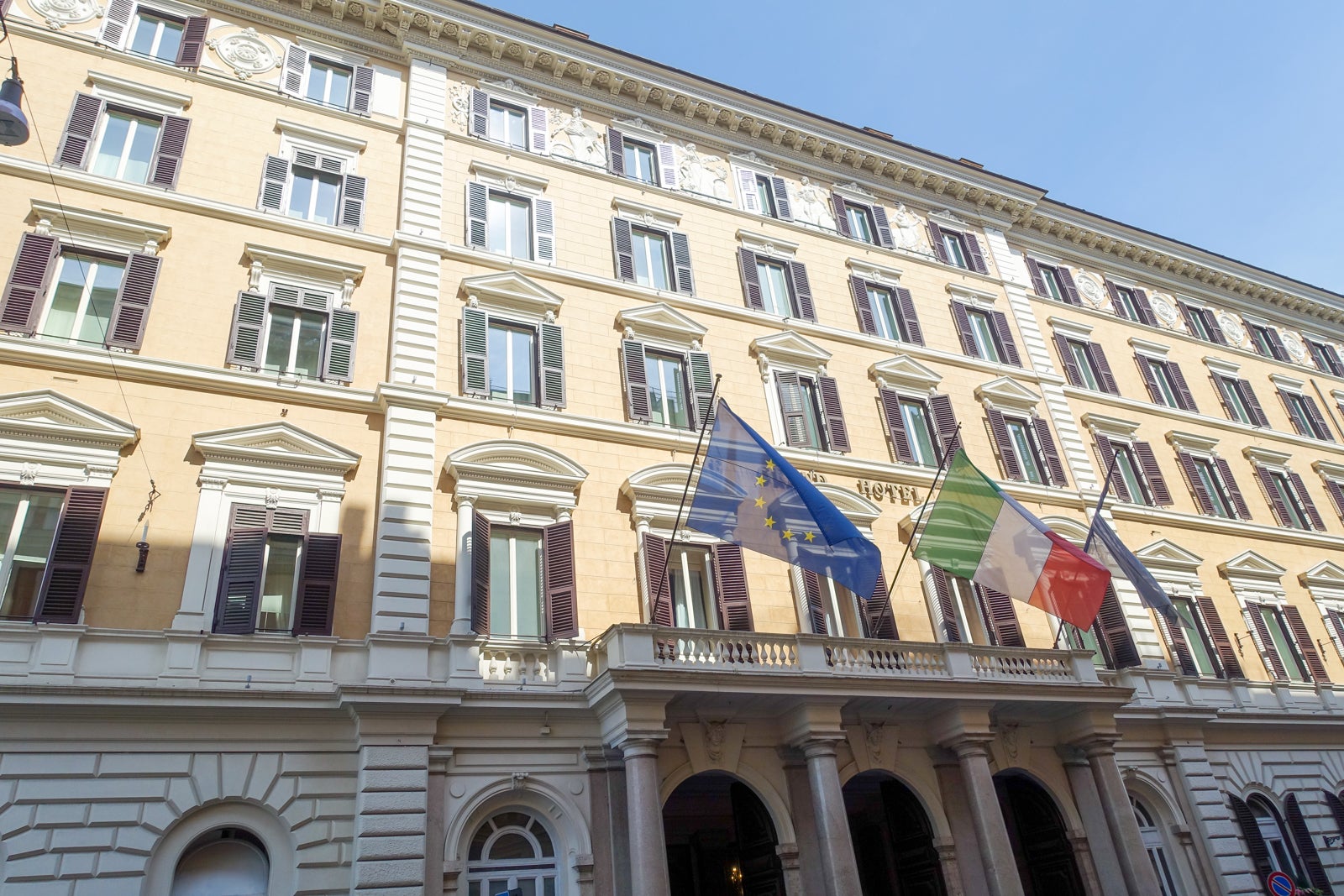 The St. Regis Rome has a storied past as one of the Eternal City's Belle Epoque grande dames. Originally opened in 1894 by Cesar Ritz as The Grand Hotel, the property has a long history of transformations. But the hotel might have recently undergone its greatest metamorphosis yet: a top-to-bottom renovation that cost more than $45 million. First unveiled in November 2018, the bulk of the work has been completed, with another 24 guest rooms to be finished in May and the entire project wrapping up in July.

Veteran hotel interior designer Pierre-Yves Rochon -- who has also designed interiors for the Shangri-La in Paris, the Savoy and Four Seasons in London and the Waldorf-Astoria in Beverly Hills -- brought a palette of understated neutrals, calming blue hues and a healthy dose of Italian luxury to the revamped property.

On a recent trip to the Italian capital, I was able to stay on the property and see for myself that the project's end result is a temple to glamour and relaxation fit for a Roman emperor.

As you can imagine with a property like this, a stay here won't come cheap. Rates for a base room can be anywhere from €470 (~$530) to over €1,200 (~1,340) per night. During my trip in early April, the hotel wanted over €600 per night, so we elected to use points for this stay -- a total of 170,000 for two nights. It's a Category 8 property in Marriott's Bonvoy program, so each free night will cost you 85,000 points, until the chain introduces peak and off-peak pricing later this year, which will cause the rate to shift depending on season.

The St. Regis is in Rome's city center. It's a 12-minute walk from the city's Termini train station and a little more than a half-hour drive from Leonardo da Vinci-Fiumicino Airport (FCO).

Being in the center of the city, it has easy access to most tourist hot spots. While staying there, my boyfriend and I walked to the Trevi Fountain, which took about 15 minutes, and strolled to our tour of the Colosseum. That excursion was more of a 25-minute amble through town, but it was a pleasant walk, and we saw some great parts of the city.

We decided to Uber from FCO to The St. Regis. Cars were readily available via the Uber app, and the process was painless. When we told the driver we were heading to The St. Regis, he earnestly told us, "That is the best hotel in Rome." A high bar to live up to, but one that we had no reason to doubt by the end of our stay.

We arrived at the hotel just after 6pm, gave our bags to the bellhop and were able to sit down with the desk agent and check in immediately. We were given a tour of the gorgeous and striking lobby. The cavernous space featured lavish seating for the hotel's bar and restaurant, Lumen. Decorative accents evoked antiquity, like glittering mosaic floors, ornate moldings and iron statues that wouldn't have been out of place in the Roman Empire, made the lobby feel unique to the Eternal City and help distinguish it from any other fancy cookie-cutter hotel.

But the real showstopper for me was the massive chandelier in the center of the room. Crafted out of Venetian Murano glass, it was a worthy focal point for such an elegant space.

After showing us the lobby, the front-desk associate handed us off to the bellhop, who walked us to our room on the third floor and then delivered our luggage.

My room at The St. Regis Rome was one of the most comfortable hotel rooms I've stayed in. Although it wasn't large, the design allowed us to unwind in style, while the powder-blue-and-white color scheme added to the fresh and modern feeling of the room. The bedroom area included a king-sized bed, small couch and coffee table, TV, desk area, minibar and large windows.

Smart design elements like a tall patterned mirror above the bed made the room feel even larger. And sketches that evoked classical art added to the balancing act between modern elegance and antiquity.

There was even a miniature version of the huge Murano glass chandelier from the lobby.

A complimentary bottle of chilled sparkling wine and a fresh fruit platter were waiting for us upon arrival.

This being Italy, there was of course an espresso machine in the room. It came with espresso pods that were easy to use and made a brew that tasted molto buona. The only downside was there weren't espresso mugs provided in the room -- we had to call the front desk and request some. It was only a minor annoyance, but one that could spur a minor panic in a jet-lagged traveler desperate for her caffeine. Housekeeping also did not bring refills of the espresso pods, which seemed cheap for a Category 8 hotel.

The minibar offered several bottles of complimentary water, along with wine, beer, soda and snacks for purchase.

The refrigerator was a sleek drawer that slid out of the built-in shelving unit.

We were also given a tote bag as a welcome gift. It had a pattern of artichokes and the shewolf that suckled Romulus and Remus -- an easy-to-pack souvenir of our stay!

The walls by the desk area and bedsides had several different types of outlets to accommodate international travelers. None of the outlets, however, were compatible with a three-pronged US plug that I needed for a laptop charger. But the right adapters at the front desk were just a phone call away.

The windows looked out onto an unfinished courtyard. Peering across into the opposite facing windows, we could see rooms that were still under renovation. But we neither heard construction noise nor saw any evidence of the project, like scaffolding, that would have been an eyesore.

The bathroom featured a marble shower with a separate, deep soaking tub, water closet with bidet, sink and vanity.

The shower would have passed the TPG shower test with flying colors: The rainfall shower head was flush against the tall ceiling.

There were fresh flowers in both the bathroom and bedroom -- a small detail, but a sign we were in a five-star hotel nonetheless.

There were two closets with satin hangers and a safe.

When I closed the door to the room, I noticed there was no secondary lock (like a bar or chain lock), only the electronic keycard lock. This made me slightly uncomfortable, as I think all rooms should have at least two locks -- one electronic, one manual -- for safety reasons.

Next to the door was a button for an electronic "Do Not Disturb" sign in front of the room in the hallway.

The room also featured high-tech mood lighting that guests could change depending on the time of day.

Because we were battling jet lag, we ordered room service for breakfast on the first full day of our stay. I ordered a fresh grapefruit, pastry basket and assorted jams, an Italian version of eggs Benedict with prosciutto, and a cappuccino (don't worry, it was before 10:30am). The presentation was beautiful.

The bar and restaurant in the lobby was also a fun place to grab a drink and a snack. By evening, it had a sleek atmosphere that was equally good for an aperitivo or a night cap. The bartender served up one of the best Aperol spritzes I've ever had.

Plus, adjacent to the bar was a library with comfortable couches and tables where you could have a drink and presumably get into a deep discussion.

The hotel had a compact workout space and an off-site spa. Although the off-site spa was an inconvenience, guests could book masseuses to come to the wellness area at The St. Regis.

Towels, waters, sports drinks, snacks and a newspaper for post-workout perusing were all available at the entrance to the workout studio.

There were several types of cardio equipment, weights, kettlebells and medicine balls available in a clean, bright space.

The decadent design of the recent renovation makes The St. Regis Rome a relaxing and glamorous stay from the moment you walk in the door. The standard rooms are not large by any means, but they are beautifully appointed and relaxing. Although the rooms could have been better stocked (with espresso cups for quick caffeine access), those hiccups were easily solved. The property's location is hard to beat, as all of Rome's attractions are just a quick jaunt away.

But, like Pantheon, Colosseum or other great attractions of Rome, pictures don't do The St. Regis Rome justice. You just have to go experience it in person.

Related stories
December 2022
Current Hyatt promotions: Bonus points on stays and dining plus double stay credits
Last chance: Earn 75,000 Rapid Rewards points with these Southwest card offers
Quick Points: Triple stack these offers to maximize your next Lyft ride
Editorial disclaimer: Opinions expressed here are the author’s alone, not those of any bank, credit card issuer, airline or hotel chain, and have not been reviewed, approved or otherwise endorsed by any of these entities.