11 Ways to Score Free Drinks When Flying in Economy 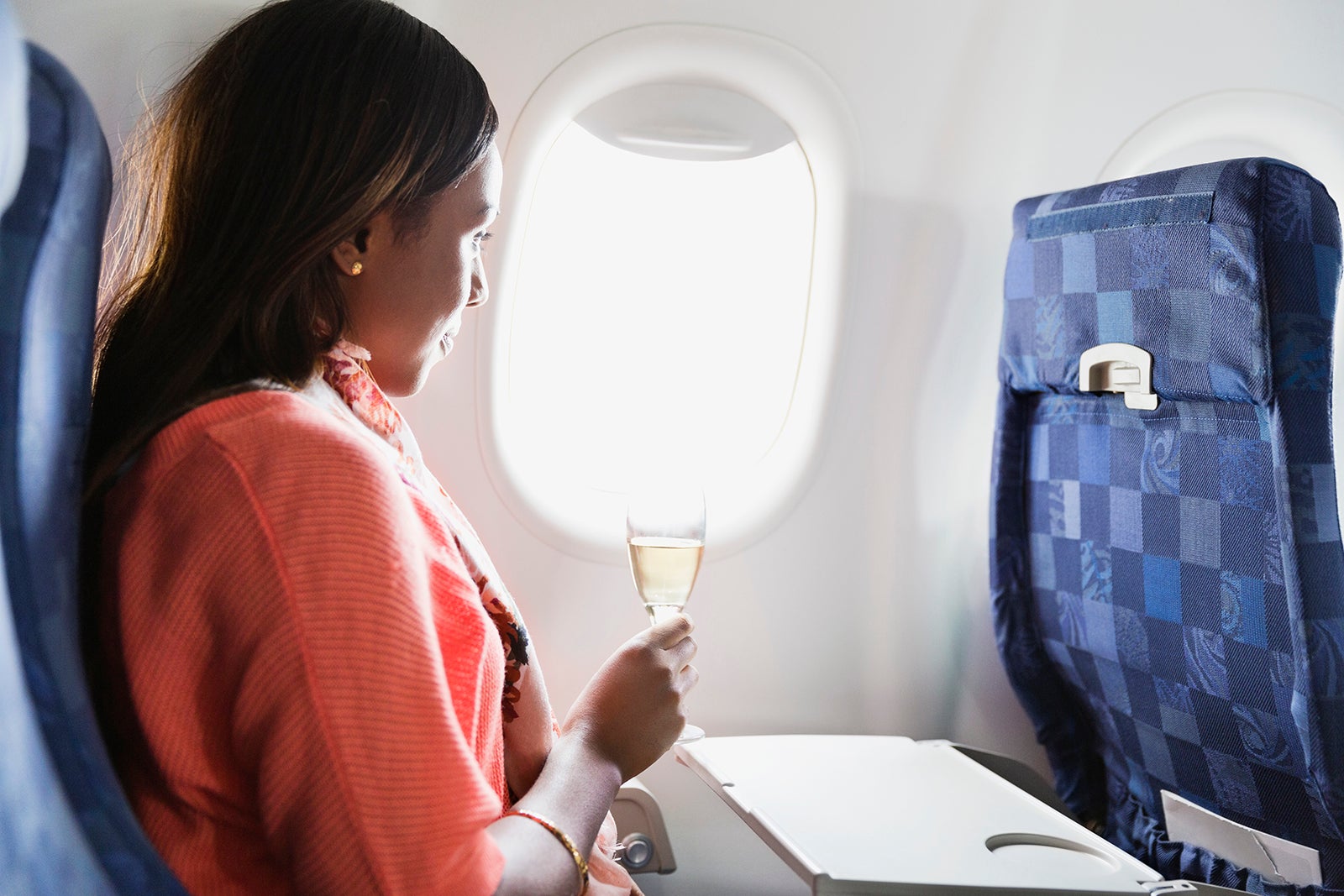 Did you know that, once upon a time, Southwest Airlines handed out a bottle of alcohol just for paying the full $26 one-way price for a ticket? In its early days, the Dallas-based airline faced steep competition from legacy airlines, so it drew business travelers in with the boozy perk. The offer was so popular that the airline briefly became the biggest Chivas Regal Scotch distributor in Texas.

While you can't get a fifth of alcohol just for flying Southwest nowadays, the airline still makes it possible for its economy passengers to enjoy free liquor. And it's not the only airline handing out complimentary drinks in the back of the airplane, either. Here are 11 ways to get free drinks when you fly economy.

While Southwest's loyalty team won't confirm this as an official policy, Southwest flyers have generally scored free Southwest drink coupons for each 10 segments they fly with the airline. Unfortunately for points and miles collectors, flights booked with Rapid Rewards points or a Companion Pass don't count toward this milestone. You need to be at least 21 years old to start accumulating these flight credits and have your preference set in your Rapid Rewards account to receive drink coupons.

But a Southwest spokesperson told TPG that the airline prefers to "surprise [customers]" with drink coupons, rather than basing it on published criteria.

Or Take a Break From Southwest

While flying Southwest a lot will get you coupons for free drinks, doing the opposite might also work for you. One TPG staff member received "we miss you" beverage coupons from Southwest trying to incentivize her to fly with the airline again after an absence.

Another way of scoring a "free" drink is to buy up to an extra-legroom economy seat on many US airlines. This free drink mini-trend started with Delta's Comfort+ seats, which are technically coded as a "premium economy" class of service rather than economy. For passengers in these seats, Delta offers a free drink in addition to the extra-legroom, early boarding and other incremental perks.

In 2018, American Airlines matched these perks in its extra-legroom Main Cabin Extra section. Passengers get "complimentary beer, wine and spirits" for paying a surcharge to get one of these MCE seats — or getting it free through elite status.

In Alaska's Premium Class, passengers get "complimentary cocktails, hand-selected wine and beer" on flights that have drink service.

Fly Southwest on a Holiday

Southwest has a long-running promotion to give passengers free drinks on certain holidays. These are listed at the bottom of the in-flight drink menu and are typically about once a month. Like with the drink coupon, Southwest officially likes to keep these a surprise. However, in past years, these holidays have included:

Fly Internationally on a Legacy Carrier

Although airlines have shifted away from offering free alcohol in economy, thankfully most legacy carriers still offer (at least) free beer and wine on international flights.

American Airlines, for example, recently expanded its free alcohol selection on certain routes. According to its food and beverage website, economy passengers on international AA flights to Asia can enjoy beer or wine, with spirits offered on Japan (NRT or HND) and Hong Kong (HKG) flights. Flights to Australia and New Zealand include beer, wine and spirits. Europe-bound flights are limited to beer or wine, and complimentary alcohol offerings, if any, vary on flights to South America. While it's not listed, we've found from experience that AA offers sparkling wine in economy on some international flights. But, you'll want to ask early, as they only stock a few mini-bottles on each flight.

Delta's policy is easier to follow and much more generous: "With every meal on long-haul international flights, enjoy complimentary beer, wine and spirits."

According to the chart on its website, United offers complimentary beer and house wines on routes between the US and Colombia, Ecuador, Peru, Argentina, Brazil, Chile, Africa, Europe, India, Israel, the Middle East, China, Japan, Korea, Taiwan, Australia, New Zealand, Singapore and Tahiti.

While that covers the largest US airlines, many international full-service airlines also offer free wine or beer in economy on international flights. Some will even offer free spirits, such as Qantas — which had an impressive spirit selection on its 17-hour flight from Perth, Australia to London.

While this takes quite a bit of effort, you'll be able to get a free drink in economy if you earn top-tier elite status on most US airlines. American Airlines offers a complimentary alcoholic beverage to Executive Platinum members traveling in coach. United does the same for its 1K and Global Services elites. On Alaska, free drinks aren't just limited to top-tier elites — both MVP Gold and MVP Gold 75K elites get a free drink. If you're looking for an elite status that requires the least amount of flying for free drinks, JetBlue Mosaic elites get a free alcoholic beverage, too.

While Delta Medallion members don't get free drinks as a stated benefit, elites who are upgraded to Delta Comfort+ can score a free drink as well.

On Valentine's Day in 2019, United launched a new compensation option for its passenger-facing employees. Customer service representatives and flight attendants can now award customers that experience minor issues or problems a free drink voucher. The passenger will receive an email with the voucher that can be redeemed in-flight.

While Southwest flight attendants used to be lax about accepting expired coupons, that's not the case anymore. Now that passengers can't horde these coupons, you might luck out and end up sitting in a row with someone who has an expiring drink ticket or two they'll be happy to share with you.

It also can't hurt to snag a seat in a row with a passenger dressed for a business meeting. While Southwest's Business Select fares are rarely worth the buy-up, these fares can be the only option available for last-minute business travelers — or a company's allowance may allow the buy-up. In addition to early boarding and bonus points, these fares come with a coupon for a free drink on that flight.

Especially if they're headed to a meeting, these business travelers may have no intention of ever using the drink coupon. And since it's only valid on the day of travel, they won't be able to save it for future use. A handful of times, I've gotten free drink coupons from these generous seatmates.

If you have a premium credit card, you may able to use the card's airline fee credit to wipe out an in-flight drink purchase. Especially with an apparent crackdown on using these fees for unapproved expenses like gift cards, cardholders may need to find new ways to use these credits. So why not use them to get free drinks?

Bring Your Own Booze

Want to take matters into your own hands? You can always pack mini-bottles of your favorite beverage in your carry-on bag. While this is OK with the TSA — as long as the liquids are under 3.4 ounces — FAA regulations "prohibit passengers from drinking alcohol on board the aircraft unless it is served by the air carrier." So, you're going to need to find a flight attendant willing to open and serve you your own alcohol in order to avoid getting in trouble.

One American Airlines flight attendant told me that the most-important thing she wished flyers understood were the rules of BYOB. And while airlines may prefer that you buy alcohol on-board, flight attendants would rather open your alcohol for you rather than face a fine. So, give them a chance to serve it to you.

JetBlue, for one, is a bit more forthcoming about their policy: "You may bring wine, Champagne or beer on a flight for consumption during the flight if it is in an unopened container. If you’d like to drink the alcohol you carry on, you may give it to one of our Inflight crewmembers, and they will be happy to serve it to you."

Featured image by Getty Images/Hero Images
Editorial disclaimer: Opinions expressed here are the author’s alone, not those of any bank, credit card issuer, airline or hotel chain, and have not been reviewed, approved or otherwise endorsed by any of these entities.