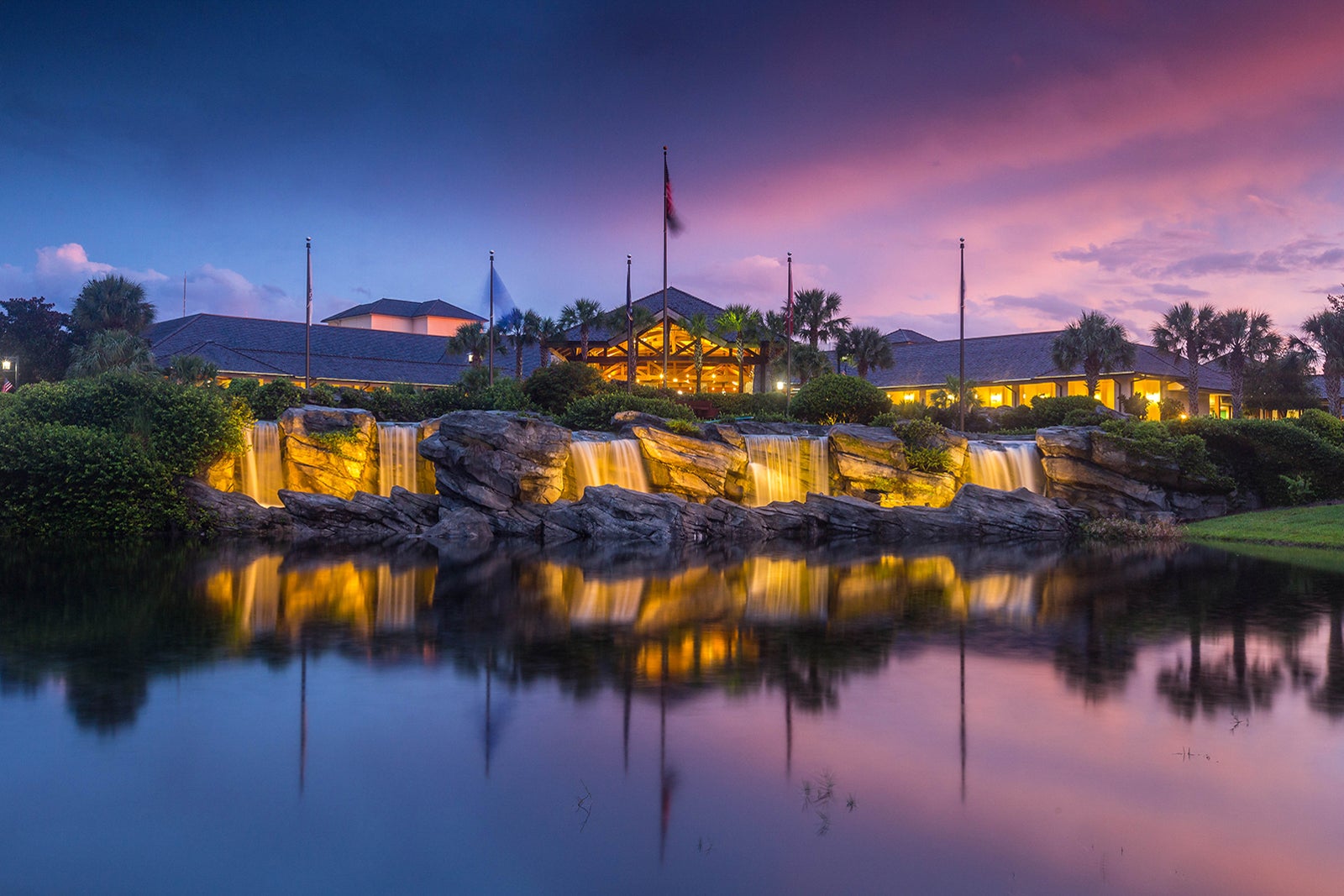 Editor’s note: This post has been updated with information about new military regulations that expand who can stay at Shades of Green. It was originally published on Aug. 19, 2019.

The Walt Disney World Resort is home to many hotels, most of them owned and operated by Disney. But there are a few that aren’t. There’s the Walt Disney World Swan, a Westin, and the Dolphin, operated by Sheraton, where you can use your Marriott points. (Here's a comparison of the Swan and Dolphin.) You can also stay at an Official Walt Disney World Hotel — like the Hilton Buena Vista Palace, Holiday Inn Orlando and Best Western Lake Buena Vista — at the Disney Springs Resort Area that get special perks like 60-day-in-advance FastPasses and Extra Magic Hours.

But, it may surprise you that the U.S. Department of Defense owns a hotel, Shades of Green, that’s also right on Walt Disney World property.

Across from the Polynesian Village Resort and less than a mile from the Magic Kingdom, Shades of Green sits on the grounds of Disney’s two golf courses (Palm and Magnolia) and is an affordable place for military members and their families to stay while visiting Mickey Mouse.

The story behind Shades of Green

This Pentagon-owned resort has an interesting history. It was originally known as the Golf Resort because of its location on Disney’s golf courses. The hotel struggled a bit, in part because many of Disney’s visitors thought the hotel lacked a distinct Disney theme like the "monorail resorts" — Contemporary, Polynesian and Grand Floridian — do.

Related: When are Disney World monorail resorts worth the price?

In 1986, the hotel was expanded and renamed the Disney Inn. It was renovated and given a Snow White theme, but couldn’t keep the high occupancy rates that the other Disney resorts were maintaining.

By the 1990s, Disney was looking for a way to offload the Disney Inn. It just so happened that at the same time, the Defense Department was looking for a place to put a new Armed Forces Recreation Center (AFRC) in the continental United States. Central Florida appealed to many service members surveyed at that time. A business plan was developed and Disney sold the property to the DOD.

The new resort, Shades of Green, which opened in 1994, was named for the many hues of green of camouflage uniforms. Occupancy rates at the resort immediately began to climb. The hotel has been self-sustaining ever since (it’s not taxpayer-funded) and provides military families with a convenient experience at Disney World at a price they can afford.

Related: How much does a Walt Disney World vacation cost?

Who can stay at Shades of Green?

In January 2020, new Department of Defense/Army Regulations expanded who can stay at Shades of Green to include Purple Heart recipients, former prisoners of war, veterans with VA-documented service-connected disability ratings and Primary Family Caregivers of eligible veterans under the VA Program of Comprehensive Assistance for Family Caregivers. Veterans must present a Veteran Health Identification Card (VHIC) indicated at least one of the three acceptable eligibility statuses (Purple Heart, former POW or Service Connected); or HEC form H623A indicating placement in VA health care priority group 8E paired with an acceptable credential like a Real ID-compliant state driver's license or a U.S. passport.

Additionally, members on active duty, Reserve and National Guard, cadets and midshipmen of the Army, Navy, Air Force, Marine Corps, Coast Guard and Cades of Armed Forces Academies can all stay at Shades of Green with a Common Access Card for identification upon arrival. Other uniformed services -- i.e., Public Health Service and National Oceanic and Atmospheric Administration Commissioned Corps -- can also book a stay at Shades of Green as long as they have a DD Form 2, PHS 1866-1 or 1866-3.

Retirees from active duty, the Reserves and National Guard (with or without pay), honorably discharged veterans with 100% service-connected disability, Gold Star Families and DOD civilian employees are also eligible to stay at the resort.

Honorably-discharged veterans can stay at Shades of Green in September and January, with a DD-214 for verification upon arrival at the hotel. Check Shades of Green's website for a full rundown of eligibility for staying at the resort.

The resort expanded between 2004 and 2006 and currently has 586 guest rooms in two wings: Palm and Magnolia. At 480 square feet, a standard Shades of Green room is the largest standard-size room you’ll find at a resort on Walt Disney World property. Every room at Shades of Green has either a patio or a balcony, so you can enjoy views of the gardens, golf courses or pools.

Here are the room types and entry-level nightly prices for each:

There is also a new Magnolia Suite that starts at $469/night and accommodates eight to 10 people with four queen-size beds and two single sleeper sofas. The first four adults in the room are included in the rate. You'll pay $15 for each additional adult. Anyone 18 or under stays for free.

All rooms have a minifridge, and guests may choose to have groceries delivered to save money on breakfast, snacks and drinks. (Here's how to get groceries delivered at Disney World.) Suites, which are limited, also have a microwave and separate bedroom. If you want that sort of layout, book as early as you can.

For example, a standard room that sleeps five with two queen beds and sleep sofa costs $139 per night in January for military ranks E1 to E6. Price increases for other ranks. To put that in perspective, a similar room at Disney's Animal Kingdom Lodge is going for $431 per night on the same dates and a room at Disney's new Riviera Resort is pricing at $730 nightly.

Getting around Disney World for free

Anyone who’s been to Disney World knows that getting around is an important consideration. One of the perks of staying at Shades of Green is complimentary transportation to the parks. Buses operate hourly and they will get you to Animal Kingdom, Hollywood Studios, the Transportation and Ticket Center (where you can connect to the Magic Kingdom and Epcot via monorail lines), Disney Springs and the waterparks. The Polynesian is also a short walk away, or you can board the Resort's monorail line to visit the Poly, Grand Floridian and Contemporary.

The hotel has plenty of dining venues, including Mangino’s steakhouse, Evergreen’s (a sports bar and grill) and the Garden Gallery. There’s also an Express Café, a Java Café and Bistro to Go, where you can order takeout or have it delivered to your room.

There are two outstanding heated pools (including one with a massive waterslide), two PGA championship golf courses, two tennis courts, a spa and a fitness center. There’s also a post exchange near the lobby that has everything you need during your stay, plus plenty of Disney gifts and souvenirs.

Guests of Shades of Green can purchase park tickets through the resort, book FastPass reservations up to 60 days in advance and enjoy Extra Magic Hours just as guests of other official Disney resorts do. You can buy your tickets at the ticket sales office near the lobby or you can buy them in advance by emailing the resort at advancedtickets@shadesofgreen.org.

If you're looking for discounted tickets, check pricing at vendors like Undercover Tourist and Get Away Today, or consider buying discounted Disney gift cards and using those to pay for your tickets on-site.

If you're considering an annual pass purchase, find out how it can save your family money and learn about price bridging: a way to save money on a Disney annual pass.

Related: Is the Disney World annual pass worth it?

My family has stayed at Shades of Green six times, with another trip booked for next year. We love this place. The resort is beautiful, spacious and comparable to Disney’s Deluxe Resorts like Disney’s Boardwalk and Disney’s Animal Kingdom Lodge. The affordability that Shades of Green offers military families allows us to visit the most magical place on earth more frequently and enjoy the convenience of staying at Disney World.