Articles
Tarah Chieffi is a family travel writer for TPG. Whether she’s sharing tips for planning the perfect theme park trip or finding a kid-friendly hotel, her goal with every story she writes is to inspire families to get out and explore the world.
Follow
Sept. 28, 2022
•
8 min read 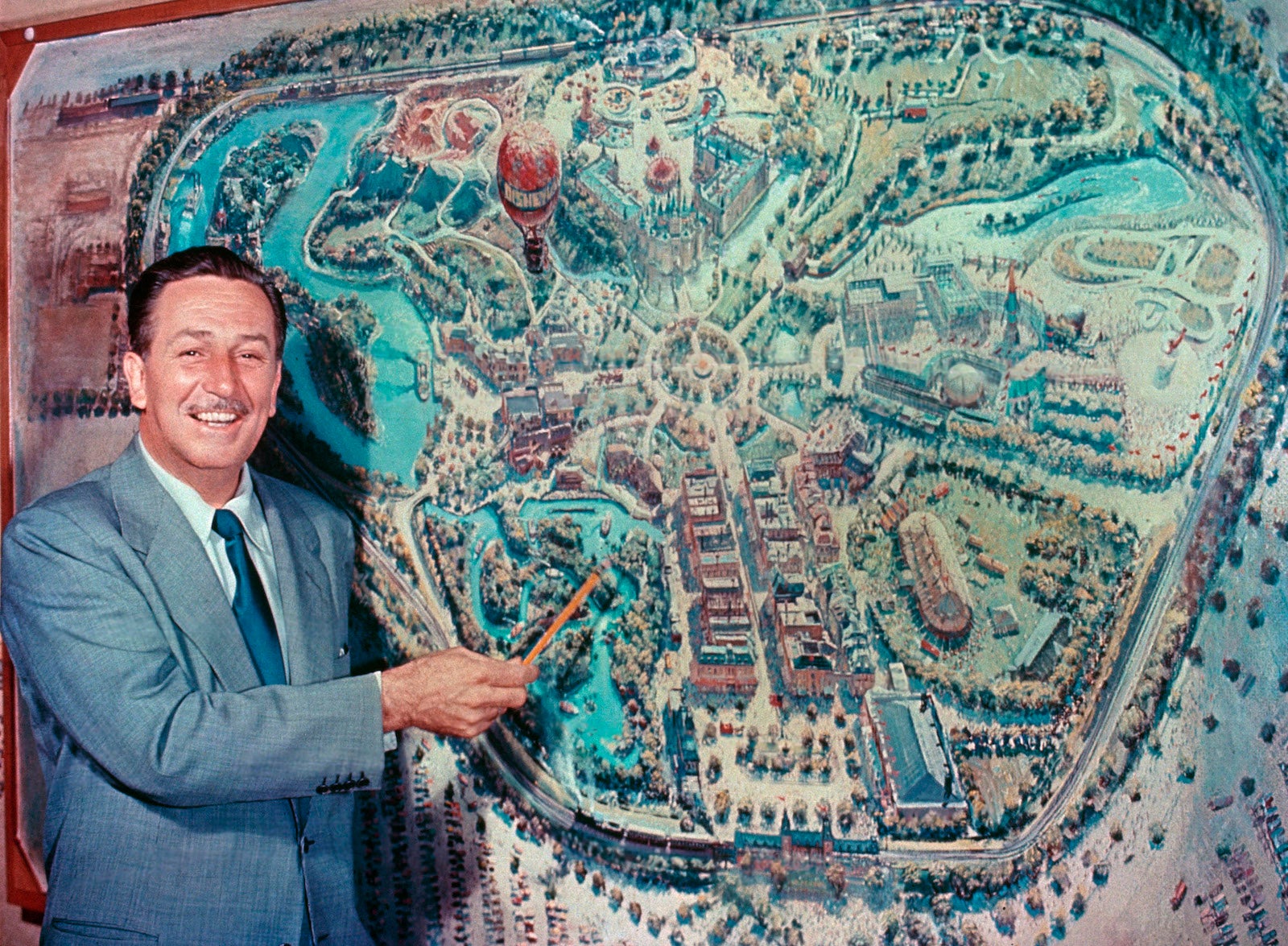 Walt Disney loved to travel just as much as he loved making movies and building theme parks. His travels took him all over the world, from the snow-covered Swiss Alps to the elegant coastline of the French Riviera.

During his time on the road, in the air and at sea, Walt drew inspiration for what would become one of the world's most well-known theme parks, Disneyland in Anaheim, California. The park opened its gates in 1955 and went on to inspire the creation of five additional Disney resorts in Orlando, Paris, Tokyo, Shanghai and Hong Kong.

Here are nine of the real-life destinations Walt visited while planning and designing Disneyland that you can still visit today.

Walt and his wife Lillian made frequent visits to New Orleans as far back as the 1940s, shopping for treasures at the city's antique and curio shops. He was so taken by the Crescent City that he created an entire area at Disneyland designed to replicate the architecture and lively atmosphere of the French Quarter.

Related: The first-timer’s guide to New Orleans: Everything you need to eat, see and do

Today, New Orleans Square is where you'll find the Haunted Mansion and Pirates of the Caribbean attractions — and, come 2024, the all-new Tiana's Bayou Adventure ride.

While it was not the only inspiration for Sleeping Beauty Castle, which marks the entrance to Fantasyland at Disneyland, Neuschwanstein castle in the German Alps was heavily influential in its design.

Walt visited Neuschwanstein during a family trip to Europe in 1952 and was undoubtedly taken by the castle's Romanesque design. Though the original is more austere in nature than the whimsical pink-and-blue theme park version, both are among the most popular tourist destinations in their respective countries.

In June of 1951, Walt and his family sailed to Europe on the Queen Mary for a nearly two-month trip that included visits to London, Paris, Amsterdam, Copenhagen, Rome and Genoa. While in Copenhagen, Walt visited Tivoli Gardens, one of the world's oldest amusement parks.

Walt was quoted as saying, "It was spotless and brightly colored and priced within the reach of everyone … The gaiety of the music, the excellence of the food and drink, the warm courtesy of the employees — everything combined for a pleasurable experience," according to the Walt Disney Family Museum.

The park's cleanliness and family-friendly atmosphere left a strong enough impression on Walt that he incorporated similar elements into his own park when Disneyland opened four years later.

While searching for inspiration for Disneyland's Pirates of the Caribbean ride in New Orleans Square, Walt flew in his very own Gulfstream jet to San Juan, Puerto Rico.

Related: San Juan for the day: What to do while your cruise is in port

His in-person look at Old San Juan and Castillo de San Felipe Del Morro helped to shape the final design of the ride, which Walt originally planned to be a walk-through attraction. Sadly, Walt never saw the final product, as he died in December 1966, only a few months before the ride opened in March 1967.

Children's Fairyland is a storybook-themed amusement park in Oakland, California, that has been in operation since 1950, five full years before Disneyland opened. Walt may have visited the park more than once, but there is at least one documented visit in May of 1954, when Disneyland was under development.

Walt likely saw attractions themed to Alice and Wonderland and Peter Pan, both of which now have their own versions at Disneyland. He was so impressed with the park that he hired the Children's Fairyland's director and chief puppeteer onto the staff at Disneyland.

Founder's Park in Anaheim, California, is located only two miles from Disneyland. At the park, a large Moreton Bay fig tree has been providing shade to the area for more than 100 years. It is also widely believed that the tree provided a bit of inspiration for Disneyland's Swiss Family Treehouse (now the Tarzan Treehouse).

There isn't much evidence to prove that the tree fully inspired Walt to build the Swiss Family Treehouse, but there is documentation that staff members who worked on the attraction, and possibly Walt himself, photographed the tree and took recently-trimmed branches to shape details of the Disneyland tree, according to Orange County historian Chris Jepsen in a story for Yesterland.

Griffith Park in Los Angeles was possibly more influential in the creation of Disneyland than any other destination on this list. Griffith Park is credited as being the spot where Walt dreamt up the idea for Disneyland.

As the story is often told, Walt used to take his daughter to Griffith Park on the weekends for "Daddy's day." While they were going round and round on the merry-go-round and he was eating peanuts on a park bench, he "felt there should be something built where the parents and the children could have fun together," according to the Disney Parks Blog.

Today at Disneyland, you can view one of the original carousel horses from the Griffith Park merry-go-round and the famed park bench where the idea for Disneyland was born; both are located in the lobby of the Great Moments With Mr. Lincoln attraction.

Walt moved to Marceline, Missouri, in 1906 at the age of 4, and lived there until 1910, when his family moved to Kansas City, Missouri.

Walt considered Marceline to be his hometown and often spoke of his happy childhood memories there. The look of Main Street, U.S.A., however, is not meant to reflect any particular town. Rather, its design reflects an idyllic turn-of-the-century Main Street where everyone feels at home.

While Marceline's Main Street doesn't look much like Disneyland's Main Street, U.S.A., the town did play a significant role in Walt's life during his formative childhood years and the feeling of magic and nostalgia he wanted to evoke at his theme park.

Walt's first visit to the Matterhorn in the town of Zermatt, Switzerland, came in 1952 during a family vacation to Europe. He fell so in love with the scenery that he returned the following summer and filmed the 1959 movie "Third Man on the Mountain" there a few years later.

Related: How I maxed out Disneyland's Genie+ and rode 26 attractions in a single day

While visiting the filming location in 1958, Walt's fascination with the Matterhorn inspired him to build an attraction based on it: the Matterhorn Bobsleds roller coaster at Disneyland.

The coaster version is exactly 100 times shorter than the 14,700-foot-tall mountain peak.

Walt's influence can be seen at every Disney park around the world, but Disneyland is the only park Walt lived to see through to fruition. Because it's the only park where you can "walk in Walt's footsteps," it holds a special place in the hearts of Disney fans.

Just as special, though, is visiting any of these inspirational destinations around the globe that shaped Walt's plans for his original park.

Related stories
American Airlines restores free 24-hour hold option
Holiday airfare is rising: What to know if you haven’t booked yet
Philadelphia will be the next airport to get a Chase lounge
5 unexpected places that sell cruises
Featured image by DISNEYLAND RESORT
Editorial disclaimer: Opinions expressed here are the author’s alone, not those of any bank, credit card issuer, airline or hotel chain, and have not been reviewed, approved or otherwise endorsed by any of these entities.