Articles
Tarah Chieffi is a family travel writer for TPG. Whether she’s sharing tips for planning the perfect theme park trip or finding a kid-friendly hotel, her goal with every story she writes is to inspire families to get out and explore the world.
Follow
Sept. 11, 2022
•
6 min read 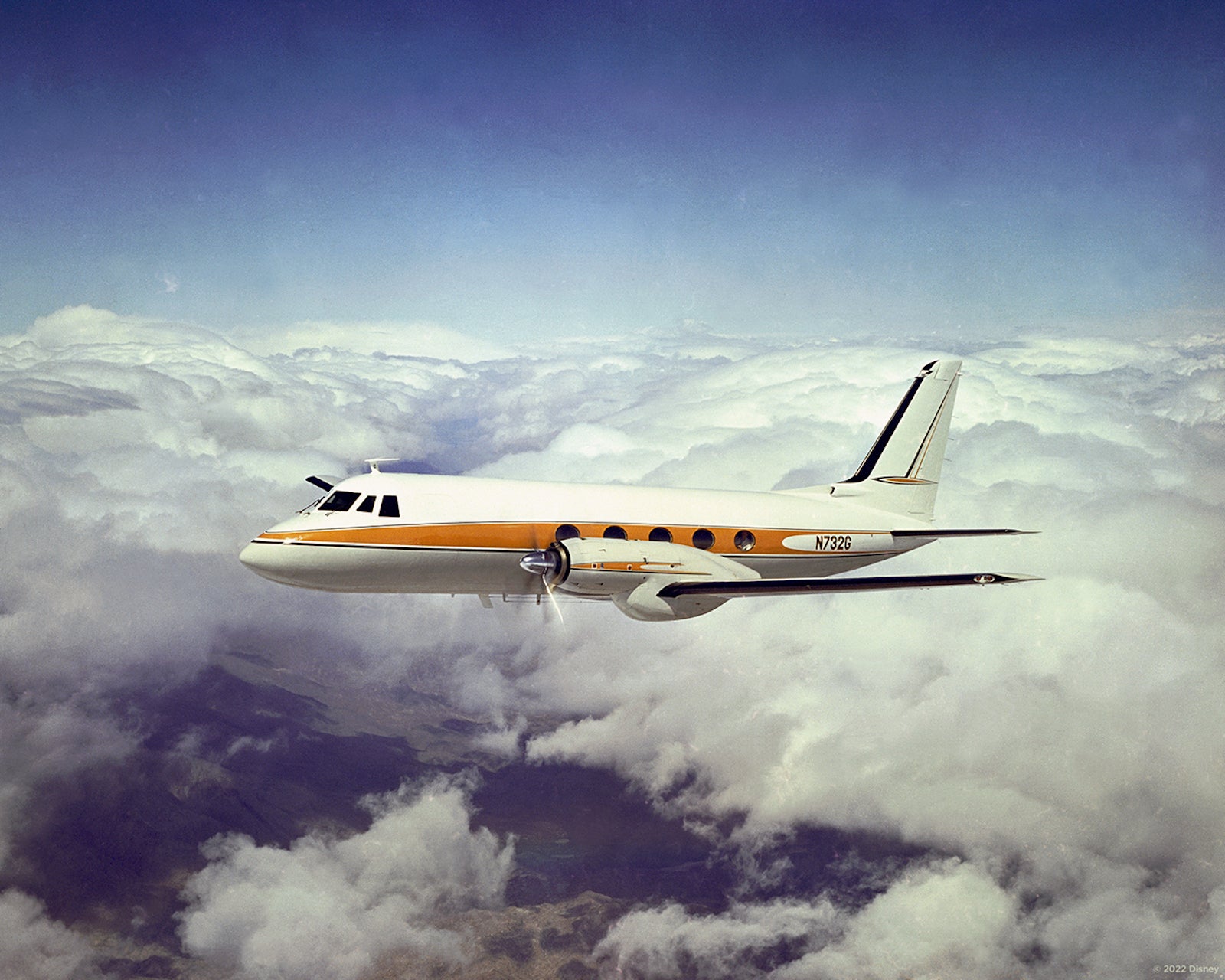 Even the most casual of Walt Disney historians knows about Walt's love affair with trains. His passion for steam-powered locomotives went well beyond the Disneyland Railroad, an opening day attraction at Disneyland that is still in operation today. Years before the Southern California theme park opened its gates, Walt built a ridable miniature railroad in his own backyard.

As integral as trains were to Walt's life and his parks, he had an equally fervent fascination with planes. From 1964 until his death in 1966, Walt flew in a fully-customized Grumman Gulfstream I. The turboprop-powered aircraft was the first plane designed specifically for corporate use — and use it he did.

As successful as Disneyland was when it opened in 1955, Walt was nowhere near ready to rest on his laurels. His dreams reached far beyond Southern California, and to make those dreams a reality he needed a plane. Walt's first plane was a Beechcraft Queen Air, an eight-seater, twin-engine light aircraft that Walt purchased in 1963. It was registered with the tail number N234MM, chosen because the "MM" matched Mickey Mouse's initials.

As the story goes, upon landing at LaGuardia Aiport (LGA) on one of his many journeys, someone mentioned to Walt that they were surprised a man of his stature wasn't flying in a Grumman Gulfstream. Not only was the Gulfstream more spacious than the Queen Air, but it was also faster and could fly farther before needing to refuel. Walt ordered his very own Gulfstream shortly thereafter, and by March 1, 1964, "The Mouse" was ready to fly.

Each Grumman Gulfstream I was completely customizable. When Walt's plane was delivered to him, the interior and exterior had been painted in a drab green primer to prevent corrosion and it only had basic avionics that allowed it to fly during the day.

Walt chose a white, black and tangerine orange color scheme for the exterior, the same colors used for the Walt Disney Productions logo. Inside the plane, Walt had a seat installed with a phone he could use to call the cockpit and a three-dial instrument panel with altitude and airspeed indicators on either side and a Mickey Mouse clock in the center.

Walt's specially-designed seat was separated from the rest of the plane by a set of opaque panels with a leaf design. They were brought from Walt Disney's home by his wife Lillian so they could have a piece of home on the plane with them. The plane sat up to 15 passengers and had a small galley kitchen, two bathrooms, two couches and a desk.

Walt's plane was part of the team

The N234MM tail number was transferred from Walt's Beechcraft Queen Air to a newly-purchased Beechcraft King Air in 1965 and was not transferred to the Gulfstream until the King Air was decommissioned in 1967. This turned out to be a blessing in disguise because it allowed Walt and his team to fly over Central Florida while scouting land for what would eventually become Walt Disney World without giving away what they were up to.

During this time, Walt's Grumman Gulfstream flew more than 277,000 miles back and forth to New York before and during the 1964-1965 World's Fair. That's where Disney first displayed "It's a Small World" and "Great Moments with Mr. Lincoln," among other attractions, both of which went on to become permanent attractions at Disneyland.

The plane also left the continental U.S. while Walt was searching for firsthand inspiration for what is now a fan-favorite attraction. Rather than rely on old copies of National Geographic, Walt flew the Gulfstream over the El Morro fortress in San Juan, Puerto Rico, while gathering ideas for the "Pirates of the Caribbean" ride that opened at Disneyland in 1967.

The plane made other memorable journeys — to Florida in 1965 to announce the secret "Florida Project" the company had been working on (now known as Walt Disney World) and to Washington, D.C., when Walt received the Presidential Medal of Freedom in 1964. Disney legends like Julie Andrews and Annette Funicello and former U.S. Presidents Jimmy Carter and Ronald Reagan are among those who flew on board "The Mouse."

After Walt's death, the plane was used by the company until it was decommissioned in 1992 and became a part of the Studio Backlot Tour at Disney-MGM Studios at Disney World. To get it there, a pilot had to land the plane on World Drive, one of Disney World's main roadways. The three-lane highway was short and narrow for a runway; the Main Street Philharmonic marching band was on site to celebrate the successful landing.

Related: 19 Disney World secrets that can add ‘pixie dust’ to your vacation

When the backlot tour closed in 2014, the plane was stored backstage at Disney World, out of sight from guests — until recently. The plane has been fully restored to its original livery, and, along with a display of photographs and artifacts from its time in service to The Walt Disney Company, is currently on display at the D23 Expo in Anaheim, California. After the expo, the plane will move to its new home at the Palm Springs Air Museum.

The plane is expected to debut at the museum on Oct. 15, 2022, and a full exhibit opened on Walt's birthday on Dec. 5, 2022. During the event on Walt's birthday, Disney also announced that the interior of the plane would be restored and recreated to its 1960s design, which was hand-picked by Walt Disney. The restoration is expected to take about two years to complete.

The exhibit marks something of a homecoming for Walt's aircraft, as Walt and his family once owned vacation homes just a few miles from the museum at Smoke Tree Ranch.

From scouting the swampland in Central Florida that would eventually become Walt Disney World to shuttling staff back and forth to the New York World's Fair, Walt's Gulfstream played an integral role in the company. "The Mouse" was essentially part of Walt's team – helping him make dreams reality and make magic real.

Featured image by THE WALT DISNEY COMPANY
Editorial disclaimer: Opinions expressed here are the author’s alone, not those of any bank, credit card issuer, airline or hotel chain, and have not been reviewed, approved or otherwise endorsed by any of these entities.