Articles
Darren Murph holds a Guinness World Record as the planet's most prolific professional blogger. He's an explorer at heart, having traversed nearly 50 countries and all 50 US states. He's flown over one million miles on Delta alone, and serves as a senior writer at TPG.
Follow
Feb. 14, 2019
•
10 min read 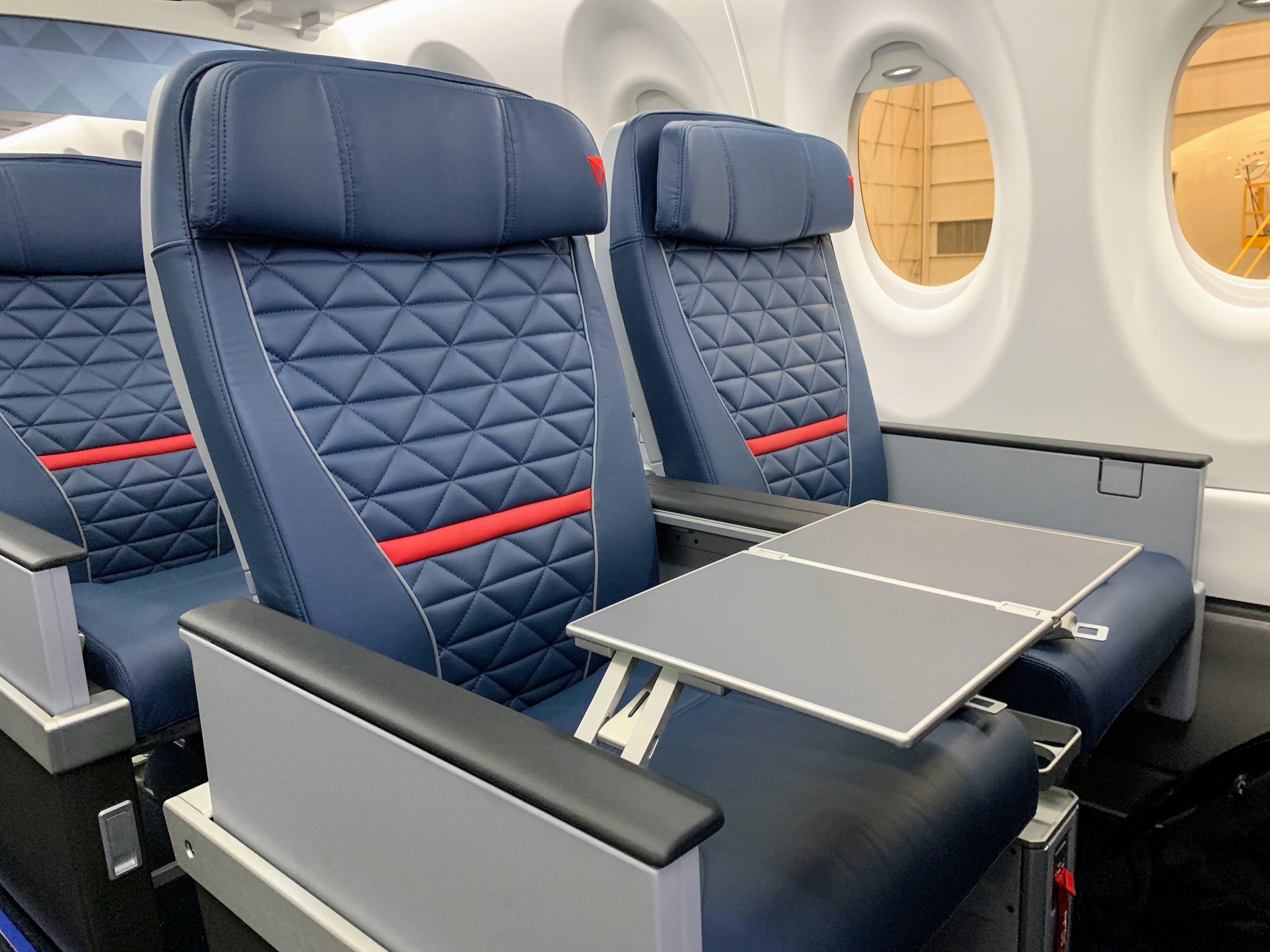 In late 2018, Delta CEO Ed Bastian got his wish as SkyMiles seat upgrades went live. He's been on a steady march to give Delta passengers more ways to burn their miles, though many of those offer a poor value compared to exchanging SkyMiles for a free award seat.

I've seen Delta offer upgrades from Main Cabin to Comfort+ as well as to First Class. Pricing is dynamic and pegged to whatever the cash price of the upgrade is, with Delta generally pricing mileage upgrades such that each SkyMile is worth approximately 1 cent. TPG values each SkyMile at 1.2 cents, which means that using SkyMiles for a seat upgrade at 1 cent per SkyMile is a relatively poor value.

I encourage Delta flyers to exchange SkyMiles for an award ticket — ideally during a SkyMiles award sale — where you can receive outsized value for each mile. For example, those who jumped on a recent deal to the Maldives were able to exchange 100,000 SkyMiles for a business class ticket that sells for between $5,000 and $10,000, representing a value of 5+ cents per SkyMile.

Nevertheless, Bastian recently confirmed that “over 30,000” upgrades were purchased using SkyMiles during the first three weeks of it becoming an option, and I wanted to give it a go on a trip to learn more about the process, see if any IT kinks remained and crucially, to understand if an upgrade paid for purely in miles would land me bonus Medallion Qualification Miles (MQMs) for upgrading into a higher tier of service.

As a quick refresher, the number of MQMs you earn in a calendar year is a critical metric for earning elite status with Delta. Unless you're qualifying with segments, you need 25,000 MQMs to reach Silver, 50,000 to reach Gold, 75,000 to reach Platinum and 125,000 to reach Diamond. That's in addition to earning a certain number of Medallion Qualification Dollars (MQDs). As a result, earning MQM bonuses for higher classes of service can play a huge role in pushing you closer to a higher tier of status without needing to fly more.

Here's Delta's official word on MQM bonuses and how they're earned.

It has long since been true that complimentary Medallion upgrades and cabin upgrades procured via a Regional or Global Upgrade Certificate did not earn additional MQMs. In addition, operational upgrades — handed out when coach is oversold and a passenger is bumped to the forward cabin — have never triggered MQM bonuses.

On the other hand, Delta's terms and conditions seem to indicate that you would receive an MQM bonus for landing in a superior cabin by any means other than a complimentary or certificate upgrade, but given that it's new territory I wanted to test it for myself.

In my scenario, I originally purchased a V class economy round-trip ticket between Raleigh–Durham (RDU) and New York-LaGuardia (LGA) using The Platinum Card® from American Express, which earns 5x on airfare on any flight purchased directly through the airline or when booked through amextravel.com.

As a Delta Diamond Medallion, I was upgraded free of charge on the outbound RDU-LGA leg 5 days prior to departure, so I went to the seat selector within my account for my LGA-RDU return. I had already been upgraded automatically into Comfort+ shortly after booking — yet another excellent perk of top-tier Delta status — and was confirmed in seat 7B.

Now that Upgrade with Miles is available for seat upgrades on Delta's website, I saw a sidebar coaxing me to pony up for a confirmed seat in first class on my return. While this option was once restricted to cash upgrades, there's now a toggle between Miles and Money.

I was given two options: part ways with 5,900 SkyMiles or $63.43 (shown above). Given that I wanted to see if a SkyMiles upgrade would trigger an MQM bonus by confirming me into the first class cabin, I chose the former.

A few clicks later, my SkyMiles were deducted and I was situated in 4A with a confirmed first class upgrade. This also generated a separate receipt to note the paid upgrade. However, due to the payment method being miles rather than cash, this upgrade did not earn any additional Medallion Qualification Dollars (MQDs). Had I chosen the cash option, this upgrade would not only trigger an MQM bonus, but I would earn MQDs for the added spend.

I was not able to see what fare class I was buying up into during the upgrade process, which I found troublesome. There are multiple first class fares, and when it comes to situations such as same-day confirmed changes, fare class matters. I hope that Delta tweaks this buy-up system to not just say "first class," but provide confirmation in advance of what fare you're buying into.

In my case here, this 430-mile flight typically earns 500 MQM due to Delta's (very friendly) policy of automatically applying a minimum of 500 MQM for any flight under 500 miles. Due to the 50% MQM bonus, I was expecting a total of 750 MQM from this segment — 500 MQM as the baseline, and an added 250 MQM due to my SkyMiles upgrade. Turns out, that's exactly what I received.

There's an interesting twist on all of this, though. On my day of departure for the LGA–RDU return leg, I phoned the Diamond line and requested a same-day confirmed change to an earlier flight. That flight was practically full, but because the system indicated that I had a paid first class ticket, the agent was more lenient and agreed to give me the last available first class seat on the earlier flight.

Several years back, Delta tweaked its same-day confirmed rule for Platinum and Diamond Medallions. While the same-day fee is waived for those two tiers of elites, you can only confirm onto an earlier or later flight if your same fare class is available — if the fare class isn't available, it's standby or bust. Previously, Delta would agree to move you if a seat was available in any fare class. This is a major bummer, as oftentimes fare classes dwindle as a flight gets closer to its departure date.

I mention this because it should be viewed as yet another side benefit to burning miles (or cash) for a cabin upgrade. Not only will you get the MQM bonus, but that premium fare goes a long way in providing leverage when you need to make changes as I did.

One final note: Delta's standard domestic first class tickets do not grant access to its global network of Sky Club lounges — only Delta One tickets come with built-in Sky Club privileges. If lounge access (and boosting your SkyMiles balance) is important to you, consider adding one of the cards below to your wallet.

For those devoted to Delta, be sure to check our guide to choosing the best card for Delta flyers.

Though I do not anticipate that I'll use Delta's new SkyMiles upgrade for seats very often, it could make sense in certain situations — particularly for light flyers who may not be in a position to earn enough miles for a free flight or simply want to splurge for an upcoming trip. The upgrade process was easy, painless and well documented, and it's nice to know that at least you'll net an MQM bonus even if you choose to pay for a seat upgrade with miles rather than cash. Plus, that premium fare class could come in handy if you need to move to an earlier or later flight via Delta's same-day confirmed policy.

If you've already used the upgrade with SkyMiles option, please share your experiences in the comments section below!

Featured image by First and coach class seating on Delta's new Airbus A220 (Photos by Darren Murph / The Points Guy)
Editorial disclaimer: Opinions expressed here are the author’s alone, not those of any bank, credit card issuer, airline or hotel chain, and have not been reviewed, approved or otherwise endorsed by any of these entities.