Chicken to Yukon Gold: How to Properly Explore the Top of the World Highway

Articles
Darren Murph holds a Guinness World Record as the planet's most prolific professional blogger. He's an explorer at heart, having traversed nearly 50 countries and all 50 US states. He's flown over one million miles on Delta alone, and serves as a senior writer at TPG.
Follow
Sept. 05, 2018
•
8 min read 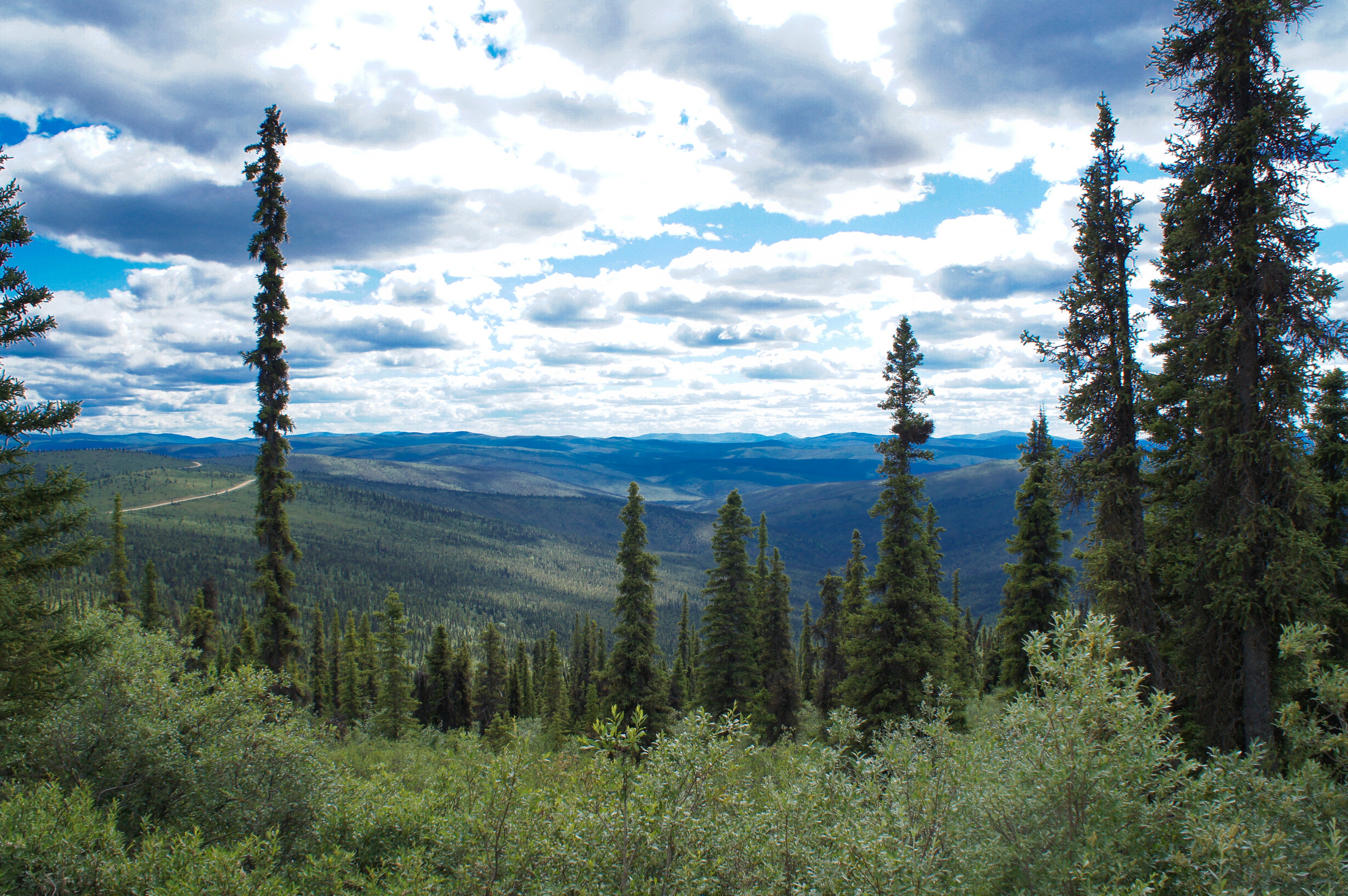 With summer coming to a close, you may be scrambling to get one last trip in before Old Man Winter arrives. One of the most beautiful, remote and fascinating summer-only journeys is traversing the 79-mile Top of the World Highway, which connects Alaska with Canada's sparsely populated Yukon.

Given how far north the road is and the fact that most of it is unpaved, keeping it accessible in the winter months isn't an option. If you're able to score a cheap award flight to Anchorage (ANC) or Fairbanks (FAI) before temperatures turn bitter, you'll be in for a ride that's simply unforgettable. I was fortunate enough to drive the highway in both directions, and it remains one of the most restorative adventures of my life.

Frankly, it's impressive that the highway exists at all. Practically nothing outside of exceptional natural beauty exists between the straight-out-of-a-movie town of Chicken, Alaska, and the there's-gold-in-them-thar-hills town of Dawson City, Yukon. It's one of the most northerly highways in the world, you change time zones when crossing from Alaska into Yukon, and you can't actually access the mining town of Dawson without a brief (and outrageously charming) ferry ride across the famed Yukon River.

It's also a riot to drive. Given that most of it is unpaved, you'll be rumbling over loose rock and dust for hours on end. Anything north of 50 mph feels like you're about to lift off and head "Back to the Future," and the sheer desolation makes you feel as if you truly were in a place where no one would find you if you wandered off.

Then, of course, there's the beauty. It's not called Top of the World Highway for nothing. The road takes you from peak to peak, with jaw-dropping views of countless valleys and fields of flowers. If you plan on stopping for photos at every photo-worthy turn, you'd best bring a tent, because it's going to take a while.

What Do I Do There?

Gawk. In all seriousness, the untold landscapes available to photograph are a shutterbug's dream, and if you're cruising at sunset, you'll really be in for a treat. It's also a great place to lose yourself in a book, or return to yourself if you've been drowning in stress. If you're jonesing for a road trip designed to reinstate wellness, this one should top your list.

Pan for Gold in Chicken

Though the highway from Tok to Chicken (both are towns in Alaska) is technically the Taylor Highway, I consider it the unofficial start of the Top of the World Highway. Along the dusty route from the United States to Canada, Chicken is one of the precious few stops with running water, hot food and other humans. With a census-certified population of under 10 people, you'll no doubt find more tourists than residents at one of Alaska's few remaining gold-rush towns. It's also a welcome respite for families, as kids can try their hand at panning for gold.

Make a Run for the Border

The Poker Creek-Little Gold Creek Border Crossing is not only one of the most remote border crossings in the world, it's also one of the few few customs ports along the border that was built both by the US and Canada and where officials from both countries work in a single building. It's also the most northerly border crossing in all of North America. At over 4,000 feet in elevation, you'll also be hard-pressed to find a border crossing in this hemisphere as high, too. It's only open from 8:00am to 8:00pm (Alaska time), so plan accordingly!

The journey from Tok, Alaska, to Dawson City, Yukon, is 185 miles, but even Google Maps reckons that it'll take you nearly six hours to drive it. My own experience says you're better off assuming 10 to 12 hours — a full, eventful day. You'll spend one or two hours in Chicken, one or two hours exploring ghost towns, and a half hour at the border crossing. And unless you're an expert off-roader, you'll probably average 35 to 40 mph, which adds to the total travel time.

Remember, Dawson City is the land of the midnight sun. Even in September, the sun won't fully set until nearly 10:00pm. You'll want to keep an eye on your watch to ensure you hit the border crossing prior to 8:00pm, as the perpetual sunlight can play tricks on your internal clock.

All along the highway, you'll see remnants of gold-rush towns that seemingly packed up and headed elsewhere overnight. A few miles west of the Poker Creek border lies a particularly colorful one: Boundary, Alaska. A derelict fueling station has been tastefully adorned with expired Alaskan license plates, making for exceptional photos.

Hike Until You're Rejuvenated

You'll want to pack your own GPS, because there's no end to the hiking options. There's also a notable dearth of defined trails. You simply park on the side of the road, spot a gorgeous valley and go. Most of the area is thinned out enough to hike through easily, and it's quite common to spot moose. If you're looking to truly get away from it all and hike endless hills until you've regained peace, this is the place.

Getting There on Points and Miles

Early fall is an exceptional time to score a cheap flight to Alaska, where I'd recommend starting your Top of The World journey. Anchorage and Fairbanks are served by all of the major air carriers, including United, American, Delta and a host of international airlines. Be sure to check out our guides on scoring cheap award flights here, and follow TPG Alerts on Twitter for airfare deals to these airports. And, given that we're talking Alaska, be sure to check out our Alaska Airlines Mileage Plan guide.

You'll save a fair number of driving hours by flying into Fairbanks, but for those with ample time, it's worth spending a few days at Denali National Park and Preserve, perfectly situated between Anchorage and Fairbanks.

Once you land, you'll need a solid rental car. Given the off-road nature of the highway, I'd recommend an SUV or truck. You'll see tiny economy cars as well as giant RVs traversing the highway, but the folks behind those wheels are far braver than I. Be sure to use AutoSlash to secure the best rates out of whichever airport you arrive at.

You'll also want to pay for your car rental with a credit card that includes primary insurance coverage, such as the Chase Sapphire Reserve or Chase Sapphire Preferred Card. The major rental companies at ANC and FAI won't mind you driving the vehicle into Canada, but given how many rocks you'll be running over, having insurance for things like chipped windows and deflated tires can save you loads of money if anything goes awry.

When embarking on the trip, don't forget to bring a passport and a credit card that doesn't ding you with foreign-transaction fees. (After all, you'll be making quite a few poutine runs once in Canada, and you certainly don't want a side of fees with your gravy.)

Given how many museums and saloons dot the cute ol' town of Dawson City, I'd recommend staying at least a couple of nights before returning to Alaska via the same route you came in on. While there aren't any award properties in this part of the world, you can earn 10x miles on hotel stays booked through Jan. 31, 2020 at Hotels.com Venture when using a Capital One Venture Rewards Credit Card.

Have any other tips to share with those headed to The Top of the World Highway? Let us know in comments or chime in at the TPG Lounge on Facebook!