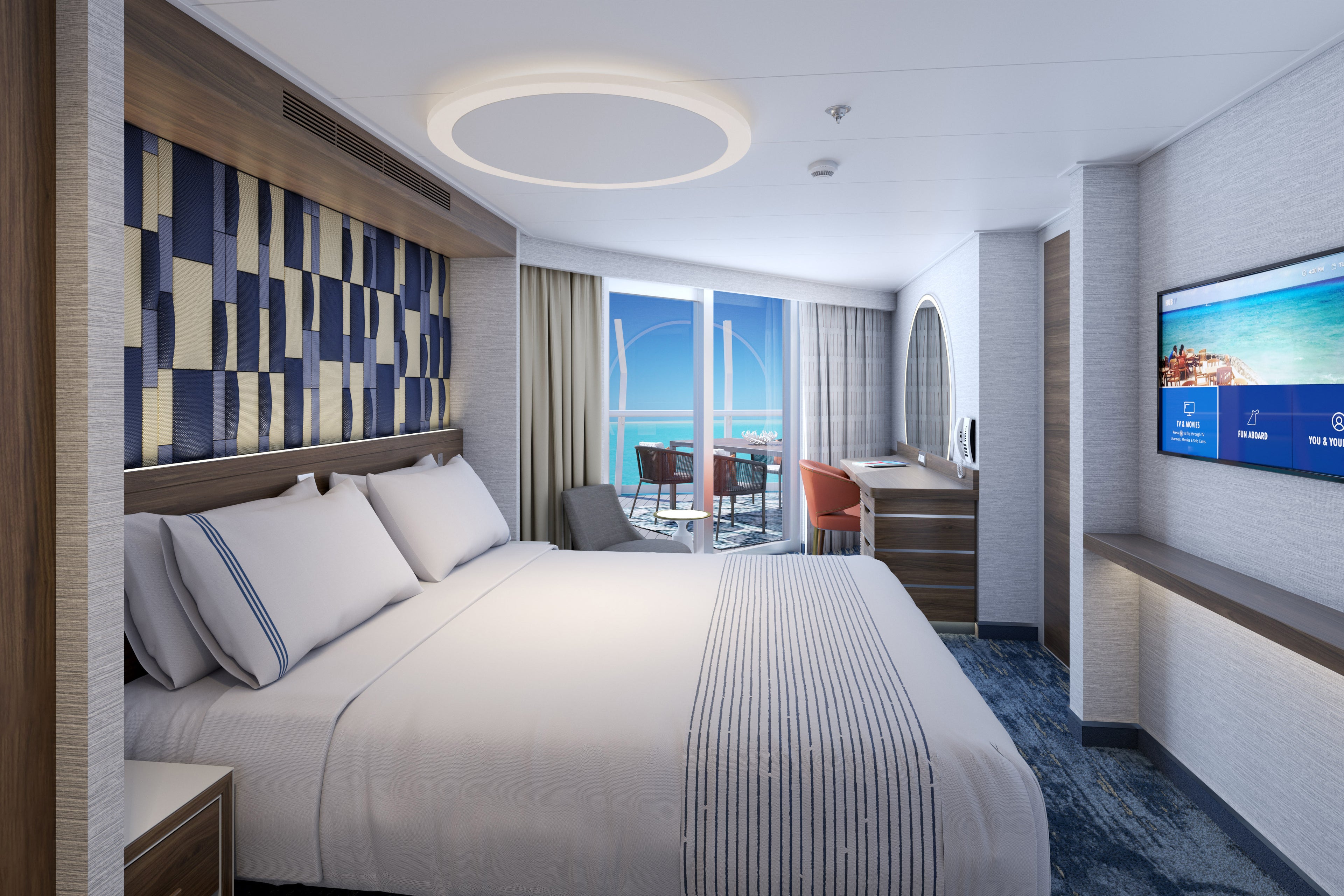 Unlike some of its biggest competitors, Carnival isn’t known for a huge range of cabin categories on its vessels.

The vast majority of the accommodations on Carnival ships fall into one of three broad buckets: Windowless “inside” cabins, oceanview cabins and balcony cabins.

You’ll find relatively few suites on Carnival ships. Each of the vessels in Carnival’s recent Vista Class series, for instance, offer fewer than 75 suites. Each of the line’s earlier Conquest Class ships have around 50 suites. The oldest Fantasy Class vessels have 28 suites and 26 junior suites.

This is in part due to Carnival’s focus on affordability. The typical Carnival customer isn’t in the market for a super fancy, high-priced suite.

That said, Carnival has seen the success that some of its competitors have had with a bigger range of upscale accommodations, and it’s eyeing more suites for future vessels. The line’s just-unveiled Mardi Gras has 180 suites — more than twice the number of its most recent ships.

Note that Carnival’s oldest ships — those that are part of the 1990s-built Fantasy Class — have relatively few balcony cabins by today’s standards (after retrofitting, several have around 150 balcony cabins, out of a total of more than 1,000 cabins in all). In part because of this, Carnival has been phasing these ships out of its fleet.

Here’s a breakdown of the broad cabin categories on Carnival Panorama, which is typical of the line’s newer ships:

On older Carnival ships (and, in general, all older cruise ships), there are far fewer balcony cabins. Only 10% of the 1,028 cabins on Carnival’s oldest vessel, the 1991-built Carnival Ecstasy, are balcony cabins.

On Carnival Ecstasy, inside cabins and ocean-view cabins make up the majority (85% in total) of accommodations, and suites account for 5% of rooms:

The takeaway here is that you’ll have a tougher time locking down a balcony cabin on an older Carnival ship than on a newer vessel. If you’re planning a cruise on one of the line’s older vessels and a balcony cabin is a must, you’ll want to book early to make sure you get one.

Design-wise, Carnival’s cabins and suites are fairly basic and comfortable, if not super stylish. Cabins on recently unveiled or overhauled vessels have a soothing palette of creams and blues. Cabinetry in these rooms is a crisp and clean faux wood. Cabin bathrooms are neutral.

These are the cabins you stay in when you’re on a tight budget. On any Carnival ship, they almost always are the least-expensive option when you’re booking a cabin, and you often can save considerable money by booking an inside cabin versus an ocean-view or higher-level cabin.

What you’ll give up, of course, is that ocean view. Your room will have four walls and no windows offering a glimpse of the outside world.

Related: Why inside cabins aren’t as bad as you think

Inside cabins on Royal Caribbean’s Symphony of the Seas, by contrast, measure just 149 square feet — quite a bit less than the inside cabins on Carnival Panorama.

Note that, in a quirk of the cabin categorization system at Carnival, there are a few inside cabins on some Carnival ships that do, indeed, have a view to the outside world. These cabins either have an obstructed view (often due to lifeboats) or a porthole, such that the view isn’t all that great. For that reason, the line classifies them as inside cabins.

With an oceanview cabin, you get a window looking out to the sea but not an attached balcony where you can sit outside and enjoy the fresh air.

Carnival’s newer ships have relatively few such cabins, as generally cabins that face outwards now are built with balconies. But older Carnival ships are loaded with oceanview cabins.

Related: The 5 best cabin locations on any cruise ship

Balcony cabins are what everyone wants these days, and Carnival is building its newest ships with far more of them than in the past. As noted above, about 44% of the cabins on the line’s three-year-old unveiled Carnival Panorama are balcony cabins. But that percentage jumped to 56% on the new Mardi Gras. A sister vessel to Mardi Gras coming out in late 2022, Carnival Celebration, also be made up of 56% balcony cabins.

The typical Carnival balcony cabin has a contemporary look with clean lines and relatively minimalist furniture. They’ll typically offer twin beds that can be converted into a king bed, a built-in desk area and a sofa that often pulls out into an additional bed. Some have pull-down bunks to create more sleeping spaces. They typically measure around 185 square feet, not including the balcony area, which often measures 35 square feet.

Note that on some Carnival ships, there are specific categories of balcony cabins that have larger balconies than most — and are wonderful for sitting out and watching the waves. Often these are at the back of the ships overlooking the wake.

Related: 6 reasons to book a balcony cabin on your next cruise

On Carnival Panorama, for instance, there are “Family Harbor” and “Havana” balcony cabins overlooking the wake that have 60-square-foot balconies. That’s 71% more balcony space than the typical balcony cabin on the ship.

As noted above, Carnival ships generally don’t offer a lot of suites. And, for the most part, the suites that they do have are relatively modest in size and amenities as compared to the suites at some of the line’s rivals.

Suites on Carnival ships also haven’t traditionally come with butlers and access to private concierge lounges like the suites on many other vessels.

Still, some of that began to change with the debut of Carnival’s new Mardi Gras in 2021. Carnival went big with the suites on the groundbreaking, 5,282-passenger vessel — the biggest Carnival ship ever.

Sailing since the summer of 2021, Mardi Gras features two sprawling Presidential Suites that measure 1,120 square feet — bigger than any other accommodations in the line’s fleet.

Located at the top of the ship on Deck 17, the complexes have separate living and sleeping areas as well as the most expansive balconies in the Carnival fleet — all unusual-for-Carnival features. Measuring more than 600 square feet, the balconies, notably, also offer a lounging area with a large sunbed as well as a private outdoor hot tub and shower.

Related: 7 reasons you should splurge for a suite on a cruise ship

The Presidential Suites are among 180 suites on Mardi Gras, the most ever for a Carnival ship.

The ship has 11 different categories of suites in all, four of which are part of a new premium “Excel” category of suites that come with extra amenities and access to a new-for-the-line, resort-style enclave at the top of the ship called Loft 19.

In addition to the two Presidential Suites, the Excel suites include a dozen 861-square foot Excel Aft Suites that overlook the back of the ship and boast separate living rooms and bedrooms as well as large wraparound balconies with hot tubs. Slightly smaller are a dozen 710-square-foot Excel Corner Suites that also offer separate sleeping and lounging areas and wraparound balconies. A step down are six smaller Excel Suites that measure 614 square feet.

Every one of the suites in those categories is bigger than any suite found on Carnival Panorama.

Passengers staying in all four categories of Excel suites have access to a dedicated concierge phone line and guaranteed dining times at Mardi Gras’s extra-charge specialty restaurants (with the exception of Japanese eatery Bonsai Teppanyaki and the Chef’s Table). Other upgraded amenities for Excel suite passengers include complimentary Bottomless Bubbles soda packages, room service and laundry service, sparkling wine upon arrival and upgraded toiletries in bathrooms.

Related stories
Legislation that could gut credit card rewards set to move through Congress
Would you stay at 1 of these 8 haunted hotels this Halloween?
Southwest winter flash sale: Get one-way flights for as low as $29
You can currently buy points and miles with up to a 100% bonus — but should you?
Featured image by An artist's drawing of an Excel Presidential Suite planned for Carnival's next ship, Mardi Gras. (Image courtesy of Carnival Cruise Line)
Editorial disclaimer: Opinions expressed here are the author’s alone, not those of any bank, credit card issuer, airline or hotel chain, and have not been reviewed, approved or otherwise endorsed by any of these entities.