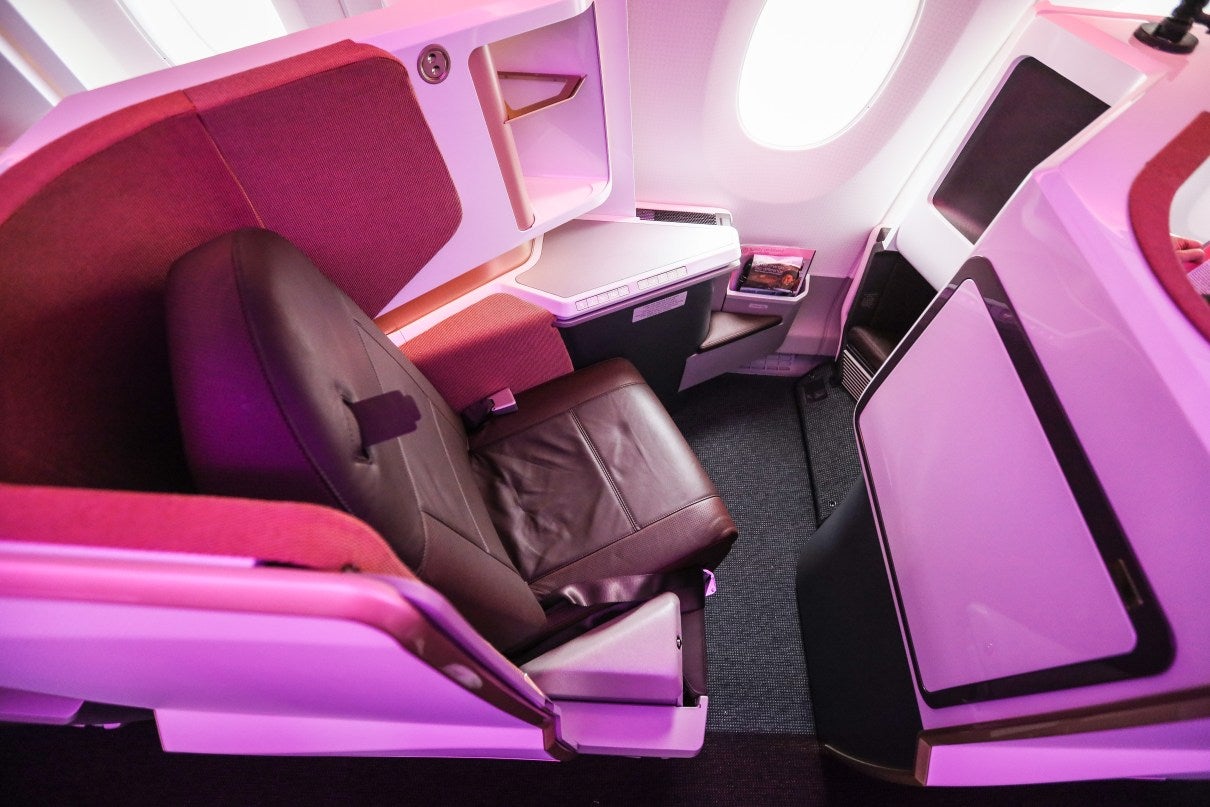 If you're flying in business class, you want to make sure you're seated in the best possible seat to maximize your travel. That can be hard, however, as different airlines offer incredibly varying products. And to make matters even more confusing, some airlines offer different products within their own fleets.

While some airlines operate four classes on some of their long-haul jets, Virgin Atlantic opted for three: Upper Class (business class), Premium (premium economy) and economy. Virgin currently only operates long-haul routes using wide-bodied aircraft -- each one complete with an Upper Class cabin.

But next time you find yourself with an Upper Class ticket, you'll want to make sure you've selected the best possible seat in the cabin. To learn more about Virgin's Flying Club, you can read our guide here.

Upper Class can be found on all of Virgin's aircraft, but the brand-new Upper Class Suite is currently only on its A350-1000s. In Fall 2019, the long-awaited A350 started flying to New York (JFK) and is slowly being introduced to other destinations. These routes will boast the most updated, modern version of the airline's Upper Class. In an interview between Brian Kelly and Virgin CEO Shai Weiss, Weiss discussed plans to retrofit the Boeing 787-9s with the same Upper Class Suite, but not before the arrival of the 14 Airbus A330-900neo aircraft that Virgin has on order.

Top picks: Number one, without doubt, is the Upper Class Suite onboard the A350s. Not only is it the airline's newest, safest and most environmentally friendly aircraft, but it also boasts the newest, most comfortable and most modern airline seats of the entire Virgin Atlantic fleet. Failing that, your next best option is flying a route operated by one of the airline's four A330-200 aircraft with its unique seating configuration.

There are two common problems that come up time and time again with Virgin Atlantic seats in Upper Class. The first being that the window seats on the Airbus A330-300s and 787-9 Dreamliners (rows A and K) actually face inward into the cabin, rather than out of the window. So, if you like to spend your time in-flight gazing out the window, then you might end up with a stiff neck by the end of the flight.

The second thing that is often discussed is that the seats on the A330-300s and 787-9s only offer a small recline in the seated position and need to be manually taken apart and turned into a bed by the crew.

Though these two aircraft are very different in many ways, the layout of their Upper Class cabins is pretty much the exact same. They both have 31 seats in a 1-2-1 configuration with a bar at the back of the cabin. The major difference is that the bar on the A330 is perpendicular to the fuselage whereas on the Dreamliner, it's parallel to the seats in row K.

Onboard both aircraft, row A is the place to be. The main reason being that each seat faces the back of the seat the row G in the middle, giving the illusion of slightly more privacy.

The reason we suggest seats 2A-5A rather than starting at 1A, is because this seat looks onto the galley and therefore might be noisy and less private than if you sit a few rows behind. There is also a bassinet directly opposite 1A, meaning you might be seated opposite a baby for your entire flight.

Another point worth noting is that service is generally started at the front of the cabin, meaning the farther back you sit, it could take longer for you to get those all-important food and drinks.

Toward the front of row K isn't a bad second choice, the main difference being that the seat is less private and has a view of other passengers' feet.

Best Virgin Atlantic Upper Class seats on an Airbus A330-200

You'll have to be flying on pretty specific routes to fly this unique configuration. What makes it a unique Upper Class product is that these four A330-200 aircraft were purchased from Air Berlin when the airline went bankrupt in 2017. After a quick refurb, the seats are up there among our favorite Virgin Atlantic Upper Class seats. But why?

First off, every seat in the cabin is both parallel to the sides of the fuselage and faces forwards -- already off to good start. Then, four coveted seats — 3A, 5A, 3K and 5K — are flush against the window for those all-important photo ops in the sky.

Virgin even calls these seats suites and went on further to come up with names for them. For example, seats 3A, 5A, 3K and 5K are called Solo Corner Suites, owing to the added feeling of privacy being farther away from the aisle.

For passengers who prefer a bit of ease when egressing from their seat but also enjoy gazing out of the window at the world below, then the Solo Freedom Suites (2C, 4C, 6C, 2H and 4H) are perfect.

And for those traveling lovers, Virgin has called three sets of its middle seats the Love Suites — 1E, 1F, 3E, 3F, 5E and 5F.

Best Virgin Atlantic Upper Class Suite on an Airbus A350-1000

As per TPG U.K.'s Nicky Kelvin's review of the Upper Class Suite on the A350, you'll probably be happy with any of the seats you sit in on an A350-1000 as "there was really not a bad seat in the house, although Row 1 definitely had an edge, as its footwell was larger than in other rows."

However, for an added feel of privacy and those views that we live for, any A and K window seat is slightly better than a D or G seat.

It might be worth noting that the Loft, an area that was designed as a social hangout to replace the bar, is situated at the back of the cabin. This could mean that those seated in row 11 and maybe 10 and 9 might find passengers to-ing and fro-ing from the Loft, and maybe being rather loud and chatty while they're there.

If you're spending your cold hard cash or splurging your stash of Flying Club miles on an Upper Class ticket, then there are definitely a couple of decisions to make before you click that confirm button. Double-check which aircraft operates the route that you're about to book. Most of the time, the aircraft type will be written in the flight details while booking. Once you know what your options are, you'll be able to make a more informed decision about the seat you'd like to sit in -- happy flying!